1855 Map of Jeffersonville, Clark Co. Indiana
Jeffersonville, being positioned along the Ohio River and just north of Louisville, came out of the pioneer era as a metropolis by Indiana standards. This map shows the Jeffersonville and Indiana railroad, as well as the Clark County Plank Road. Jeffersonville was a gateway to southern markets; and later the movement of troops and supplies during the Civil War. Notice all the commerce along the riverfront: sawmills, meat packing and shipyards. Hart and Mapother Lithographers out of Louisville, have a rich body of work surviving in maps, but also print ads, pamphlet cover illustrations and letterhead. The detail on this map is really engaging.

This map came to the lab in extremely poor condition. Like most large 19th century maps, it had been adhered to a large sheet of fabric, which was very dirty. The map was also very deteriorated with lots of missing pieces. It was extremely fragile. Even handling it would cause pieces to fall off. The front of the map was also varnished, which had caused the entire map to darken and discolor. At some point, book cloth was glued to all four edges of the front. Finally, to the entire map had been “silked.” A large sheet of silk had been glued to the entire front of the map making the map appear cloudy and discolored.

The goal for treating this map was to get it to a state where it was stable and could be handled and eventually digitized. The varnish and silk were first removed, along with all the book cloth. The map was then washed, and all the fabric was then removed. The map was then lined onto a sheet of Japanese tissue. 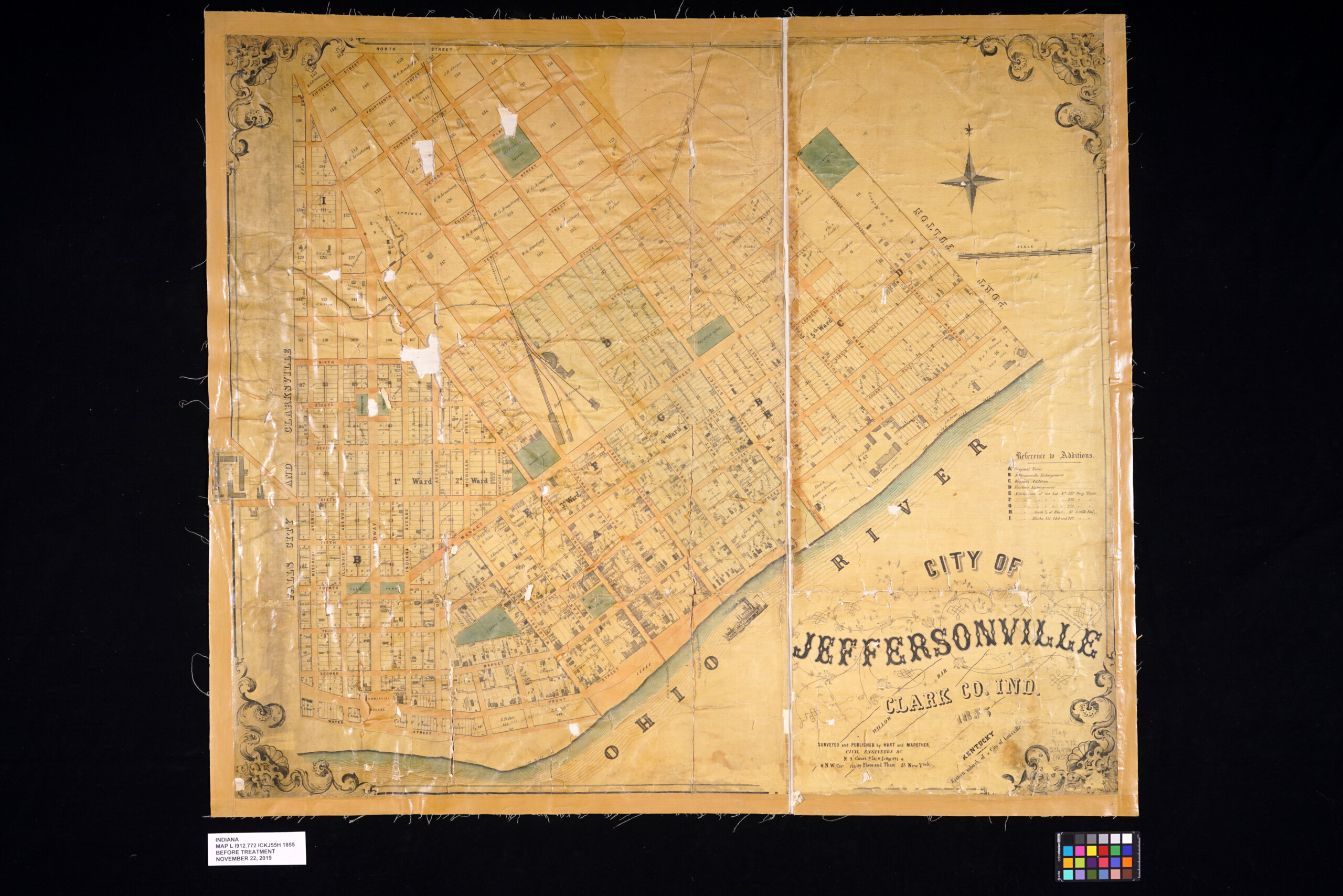 Before treatment image of the front of the map. 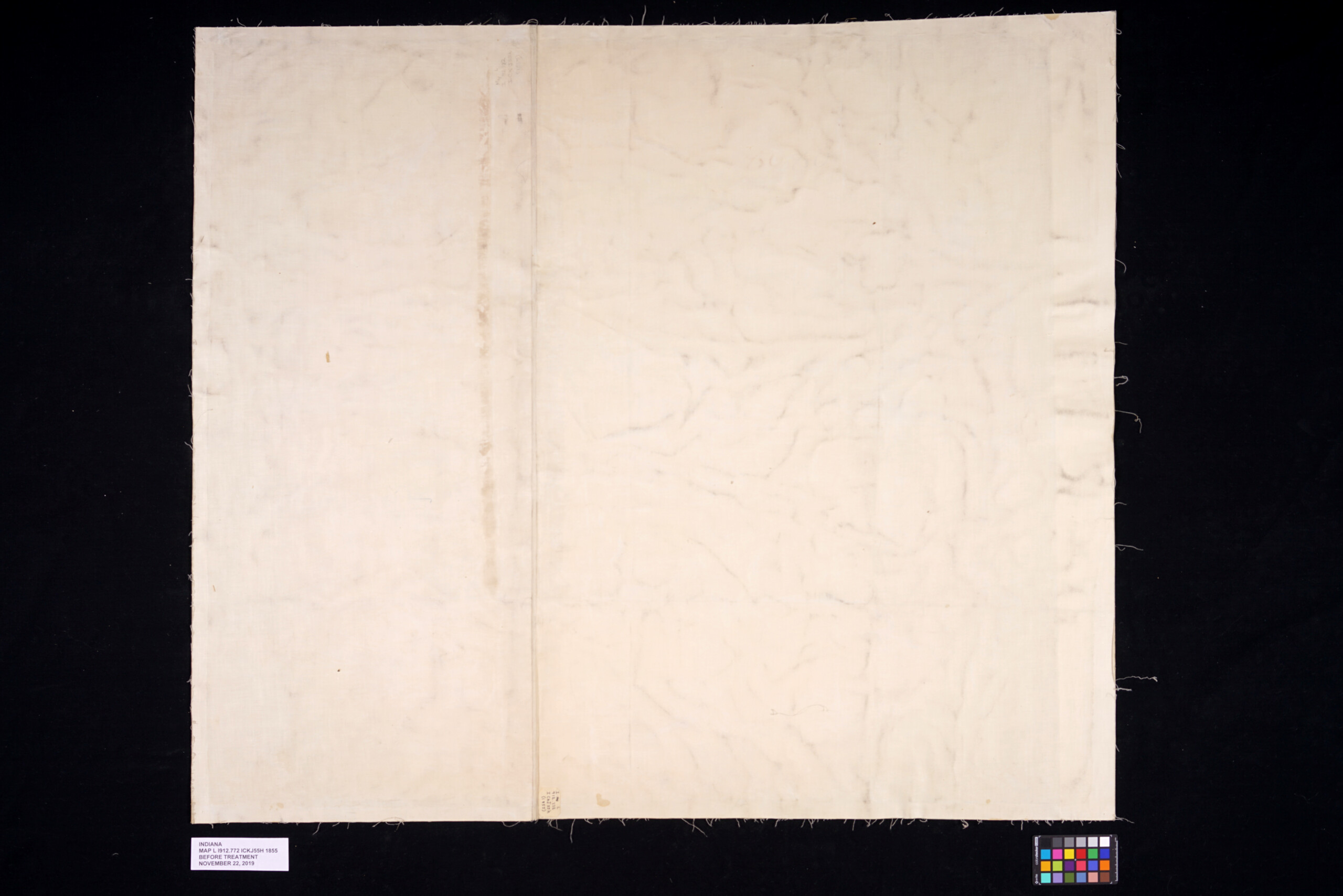 Before treatment image of the back of the map. 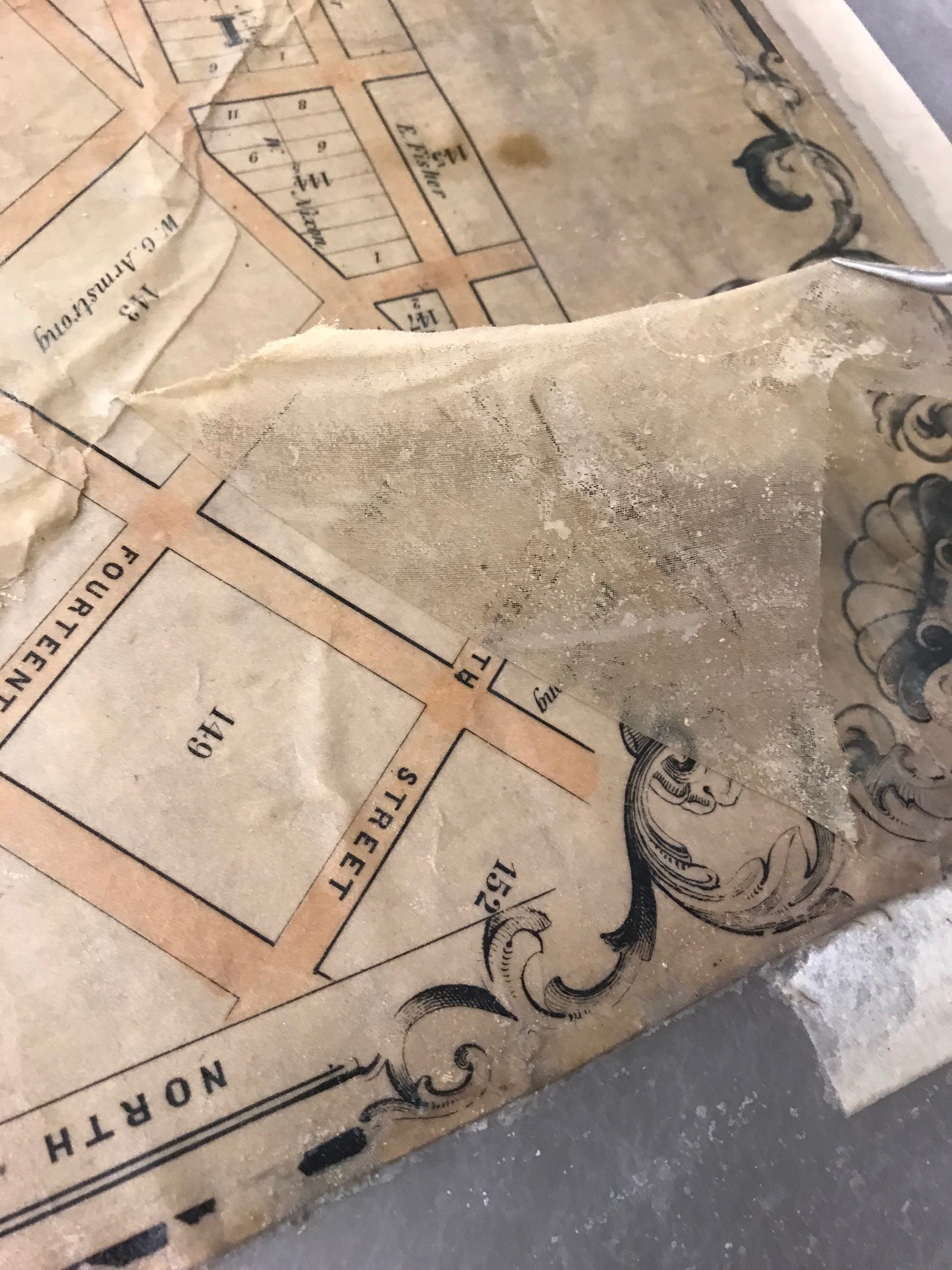 Removal of silk from the front of the map. 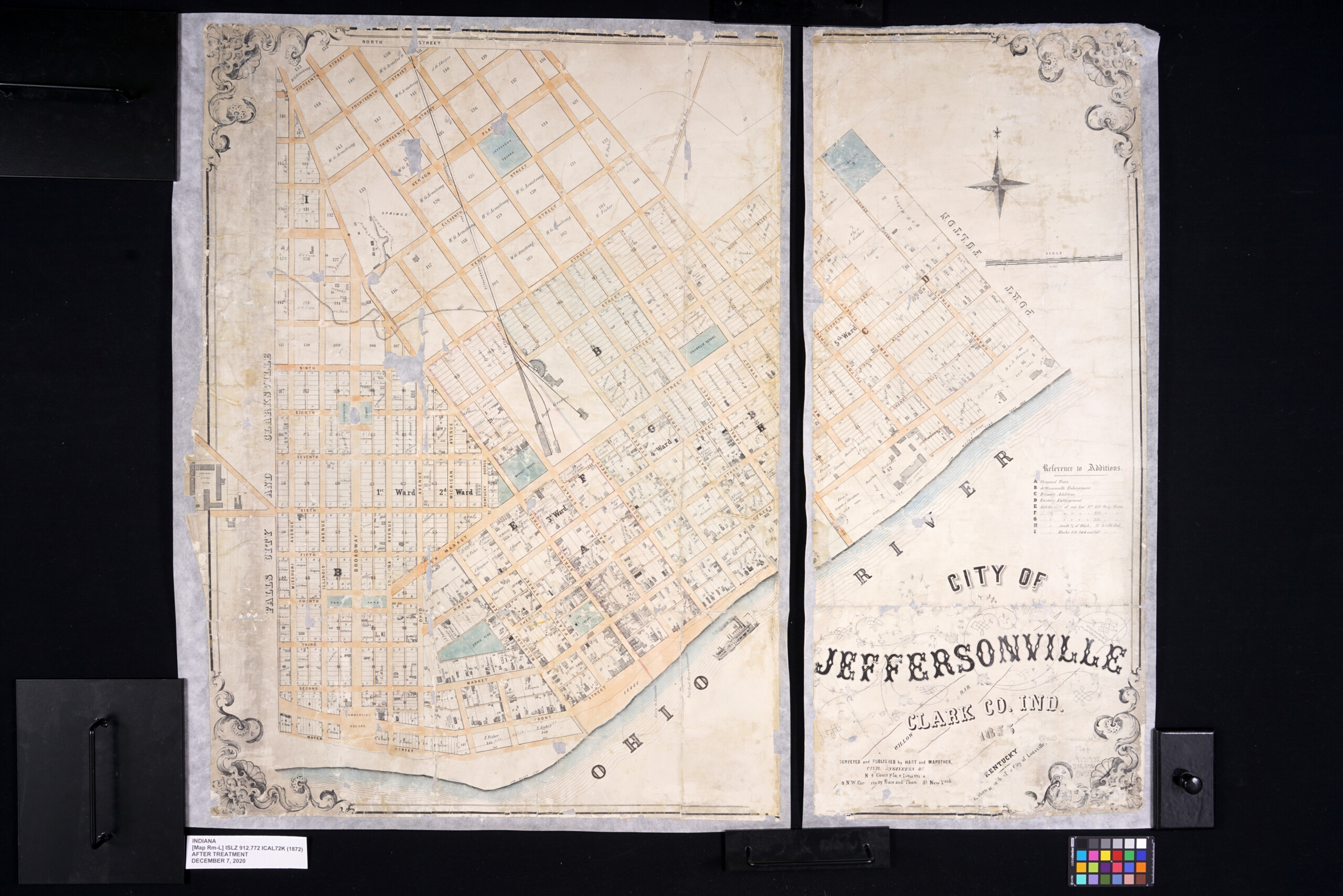 After treatment image of the front of the map. 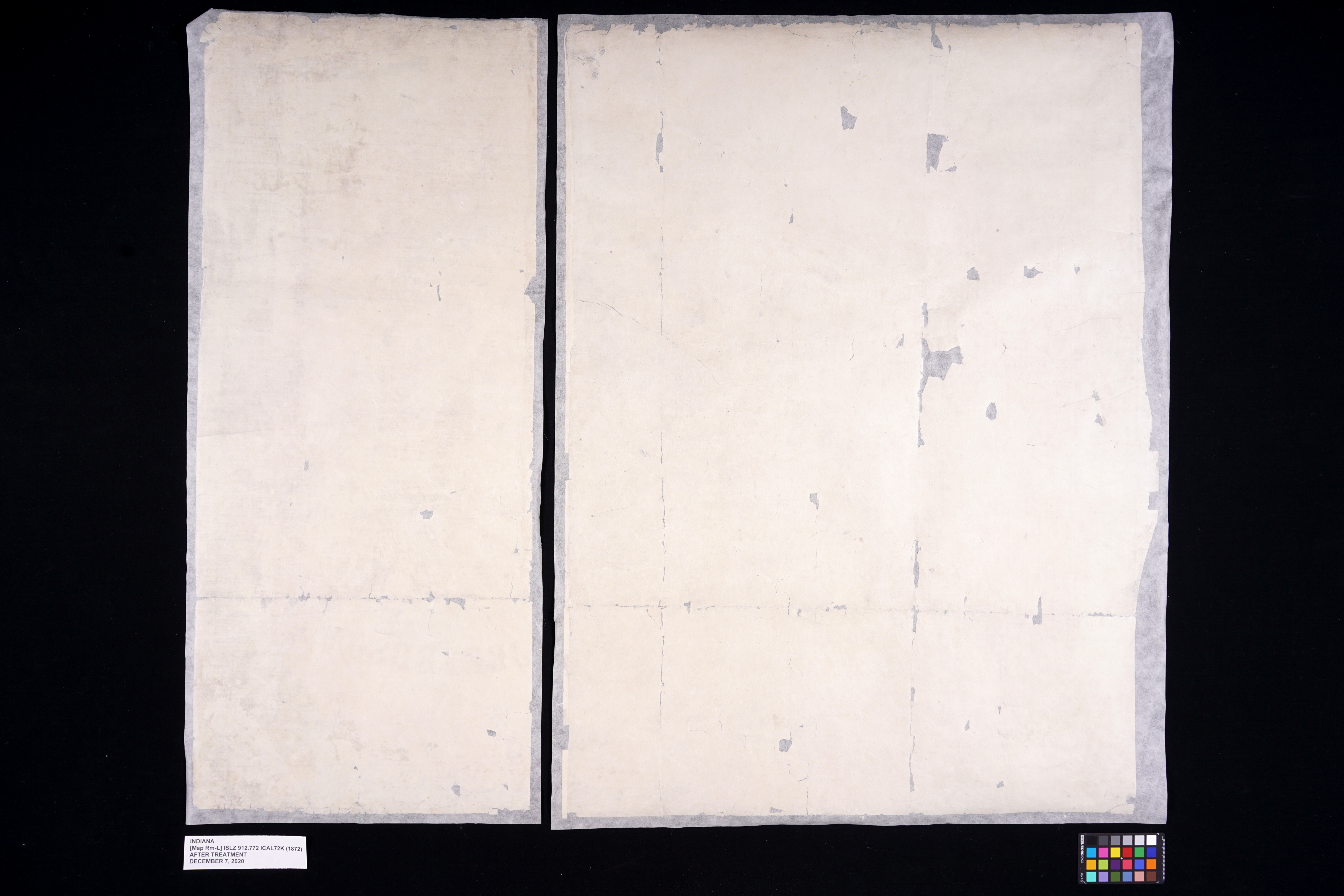 After treatment image of the back of the map.

1872 Map of Logansport, Indiana
Logansport is another Indiana city with a strong railroad tie. This 1872 map of Logansport shows many rail lines crossing through the city. This map also shows many of Indiana’s internal improvements of the era, Wabash and Erie Canal, and the unlabeled Michigan Road (Burlington Road). Another great data set on this map is the list of “Leading Business Houses of Logansport.” Something of a boomtown, Logansport’s population tripled between 1860 and 1870, going from 3,000 to almost 9,000 people. The map and the text make a wonderful snapshot of what appears to be a bustling town in 1872. Compiled from records of Julius C. Kloenne, city engineer, the subdivisions and out lots are represented in detail, showing names of additions and large landholders edging the town. Kloenne would make his own map of the city in 1876. As neat as the map is, little to be found about the publisher Barnard, Hayward and Company. In contrast, the engravers H.J. Toudy and Company, out of Philadelphia, made a fine business specializing in maps, atlases and birds-eye views until a fire in 1878 destroyed their business.

When this map was first assessed it showed a lot of problems. It was in extremely poor condition suffering from years of heavy use and prior attempted repairs. The entire map had been cut into smaller sections, in what my assume was an attempt to make the map more easily stored. Like the Jefferson map, this map was also adhered to its original fabric and varnished. Significant amounts of clear packing tape was also applied to large areas of the front, and paper had been glued to all four edges.

As with the Jefferson map, the goal for the Logansport map was to repair it for stability, safe handling and digitizing. This would mean removing all the varnish, all the tape and glued on paper, washing the map to remove discoloration, putting the sections back in their correct placement and re-lining the map onto a new sheet of Japanese tissue. 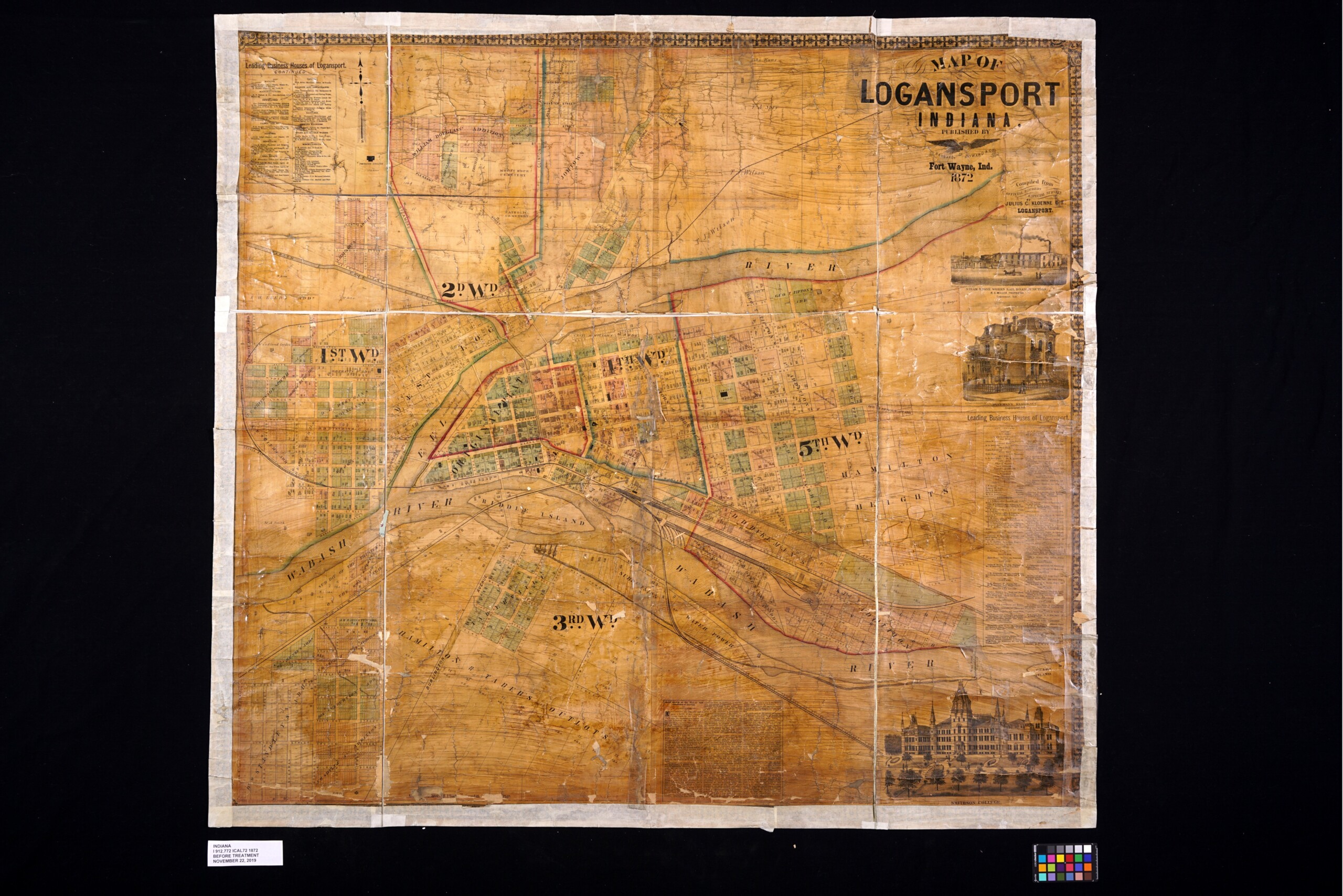 Before treatment of the front of the map. 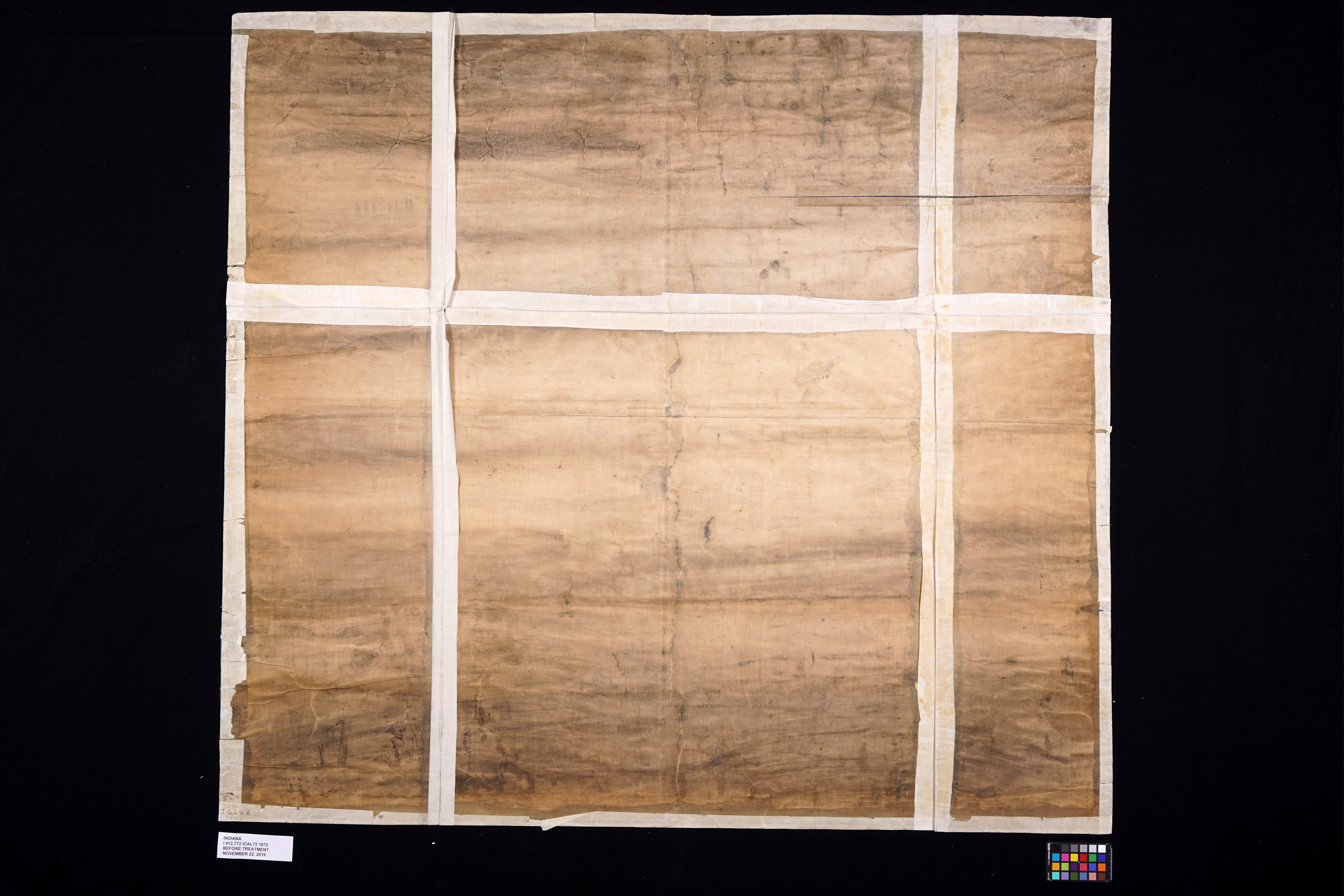 Before treatment of the back of the map. 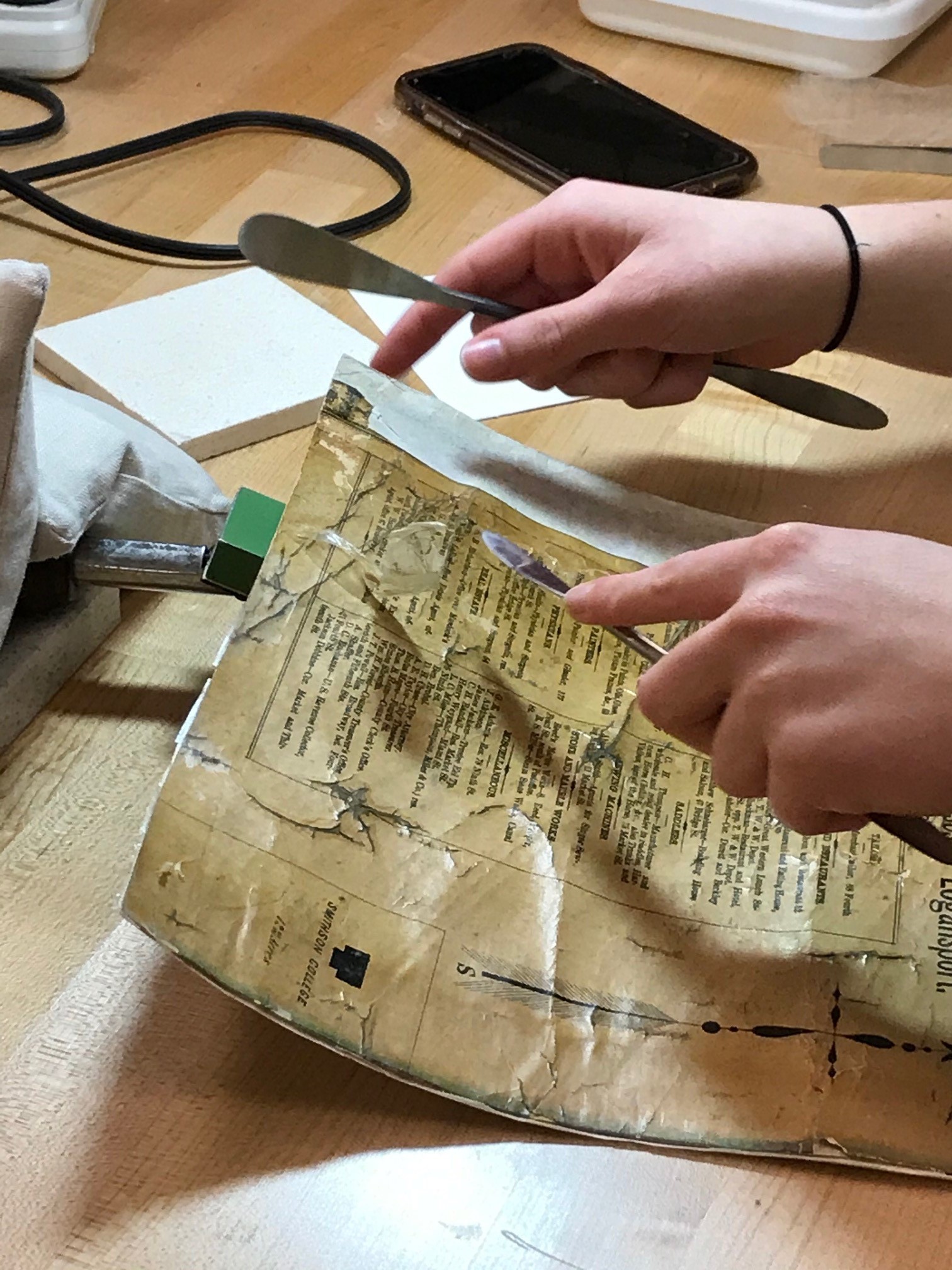 Conservation intern Lily Duncan removing tape from the front of the map on a tacking iron. 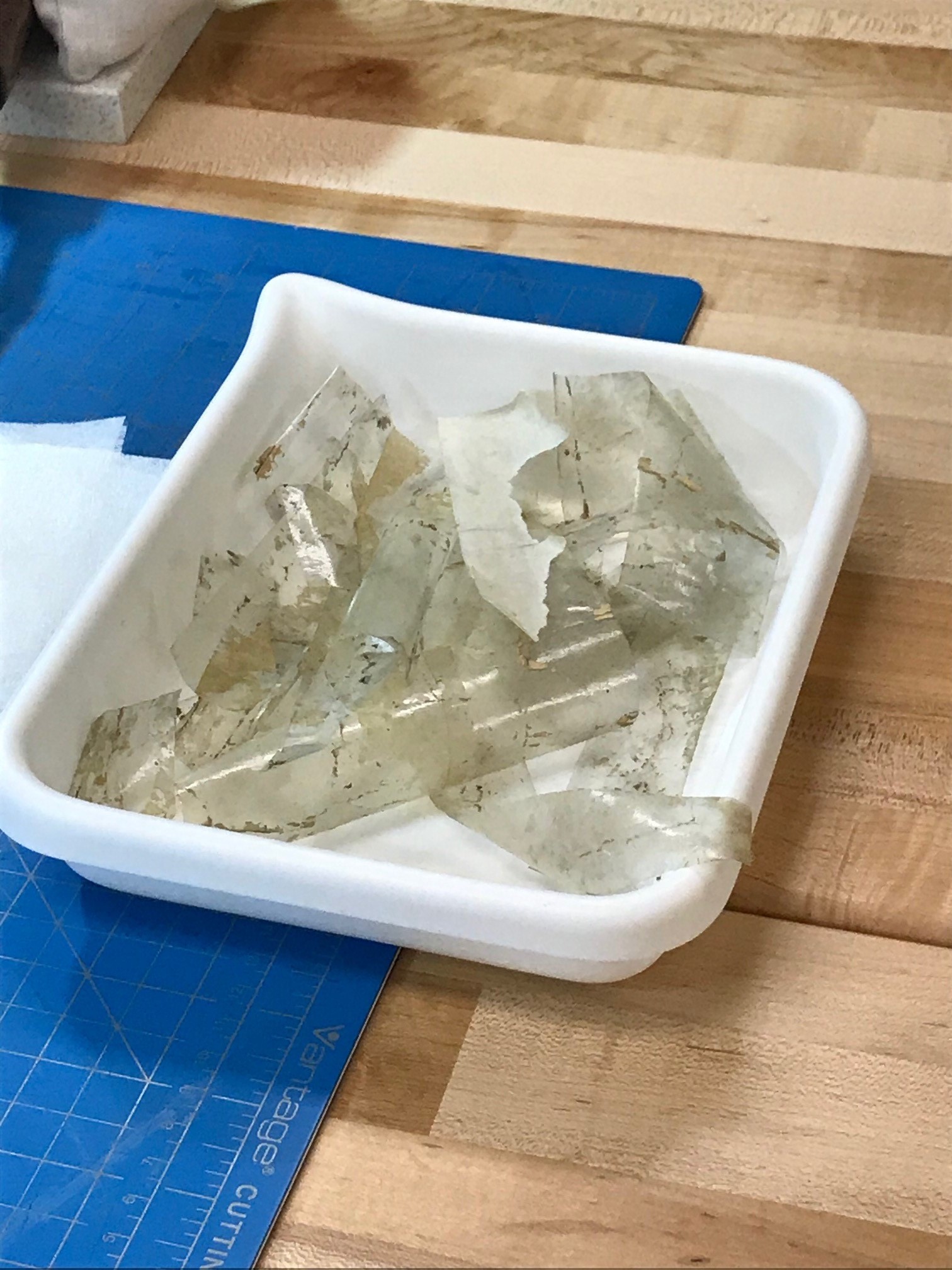 All of the tape removed. 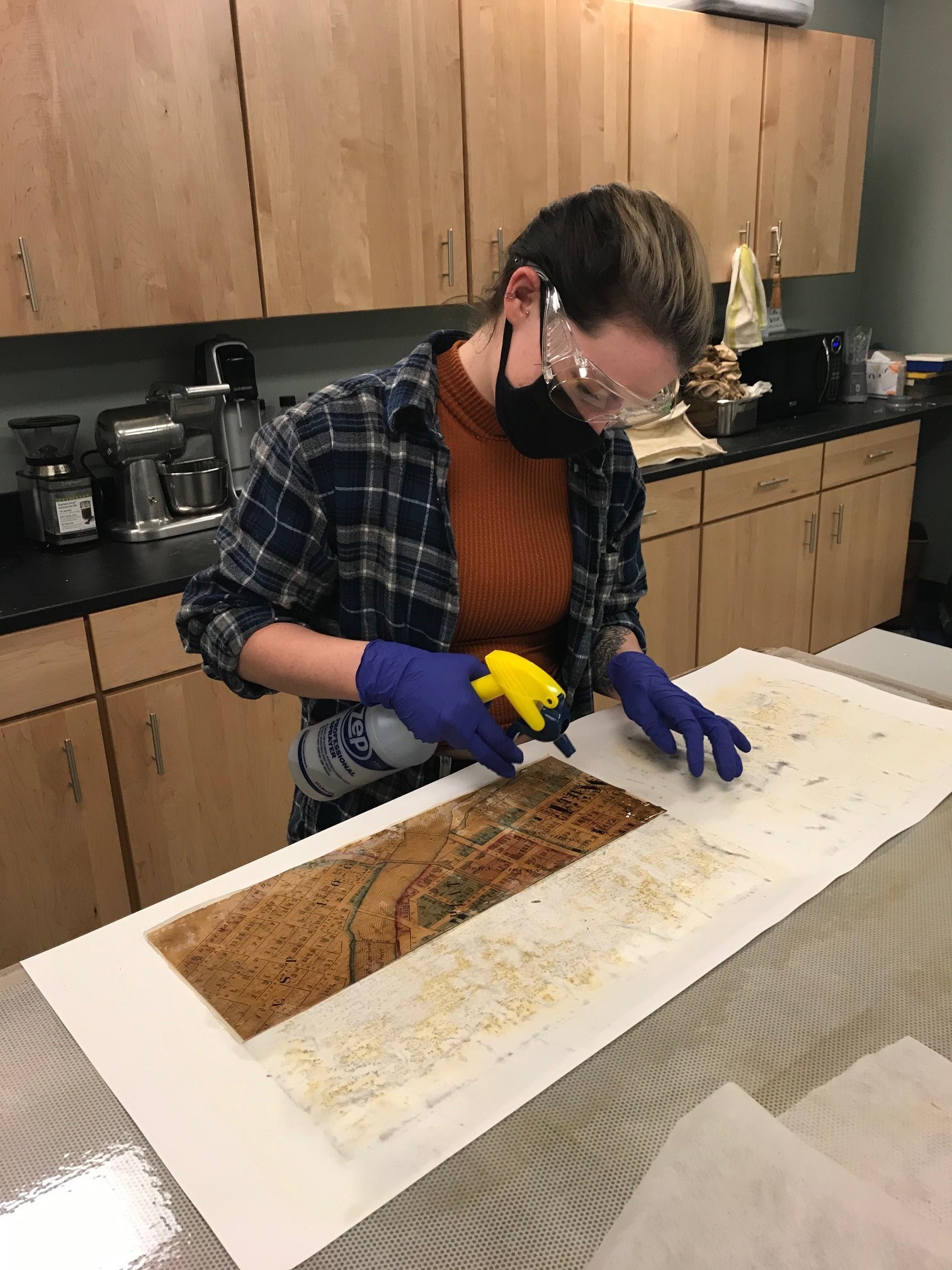 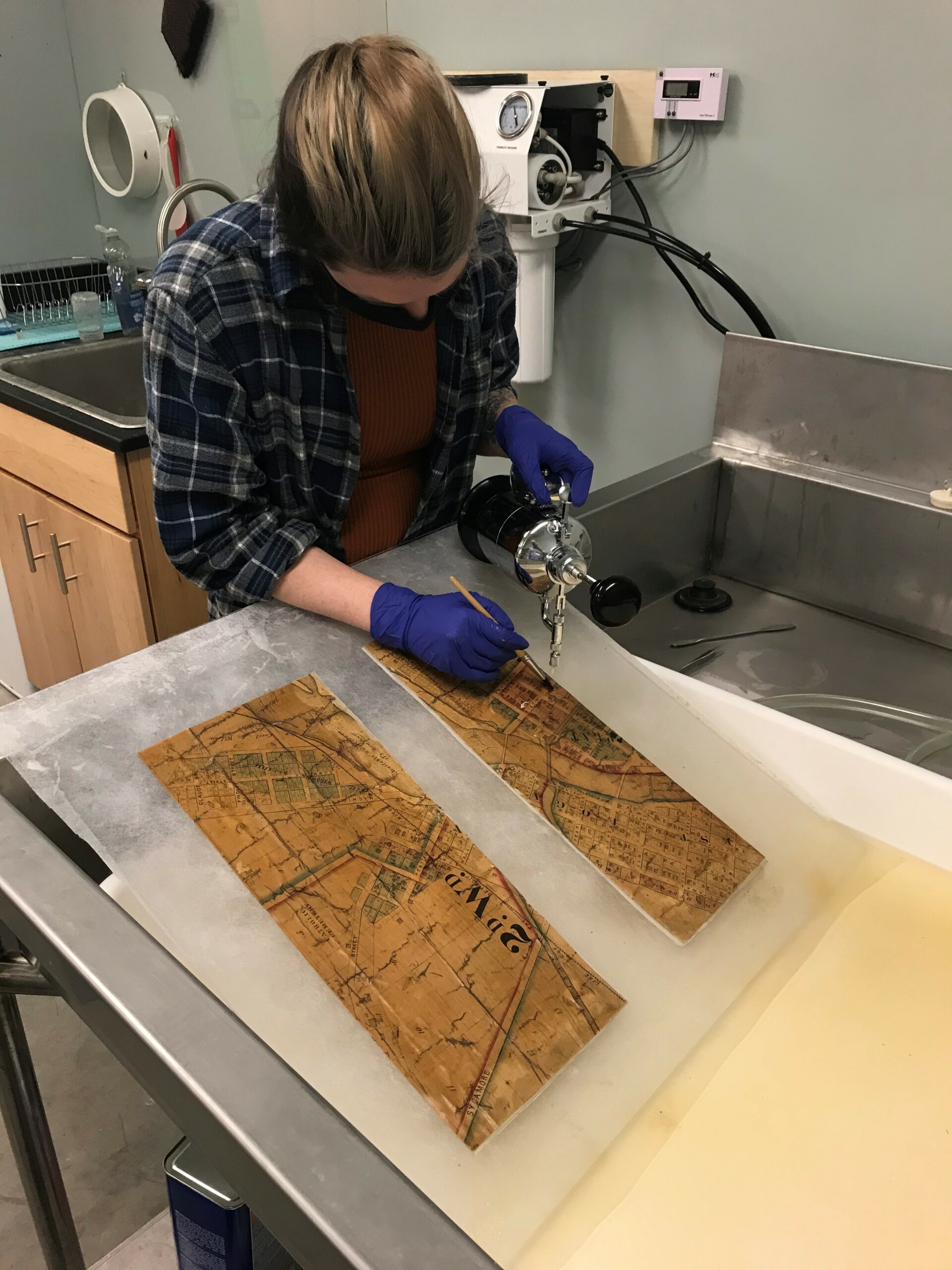 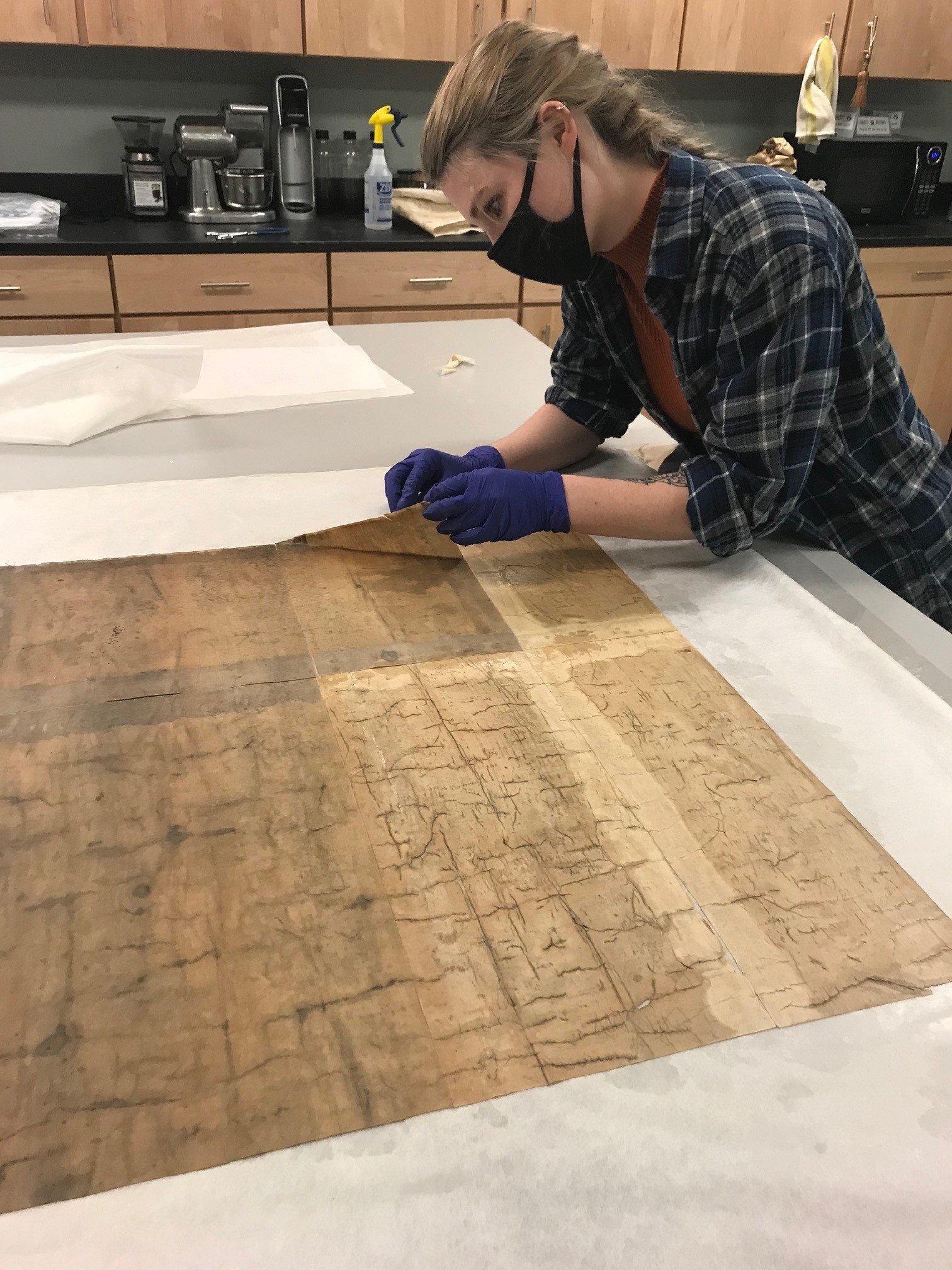 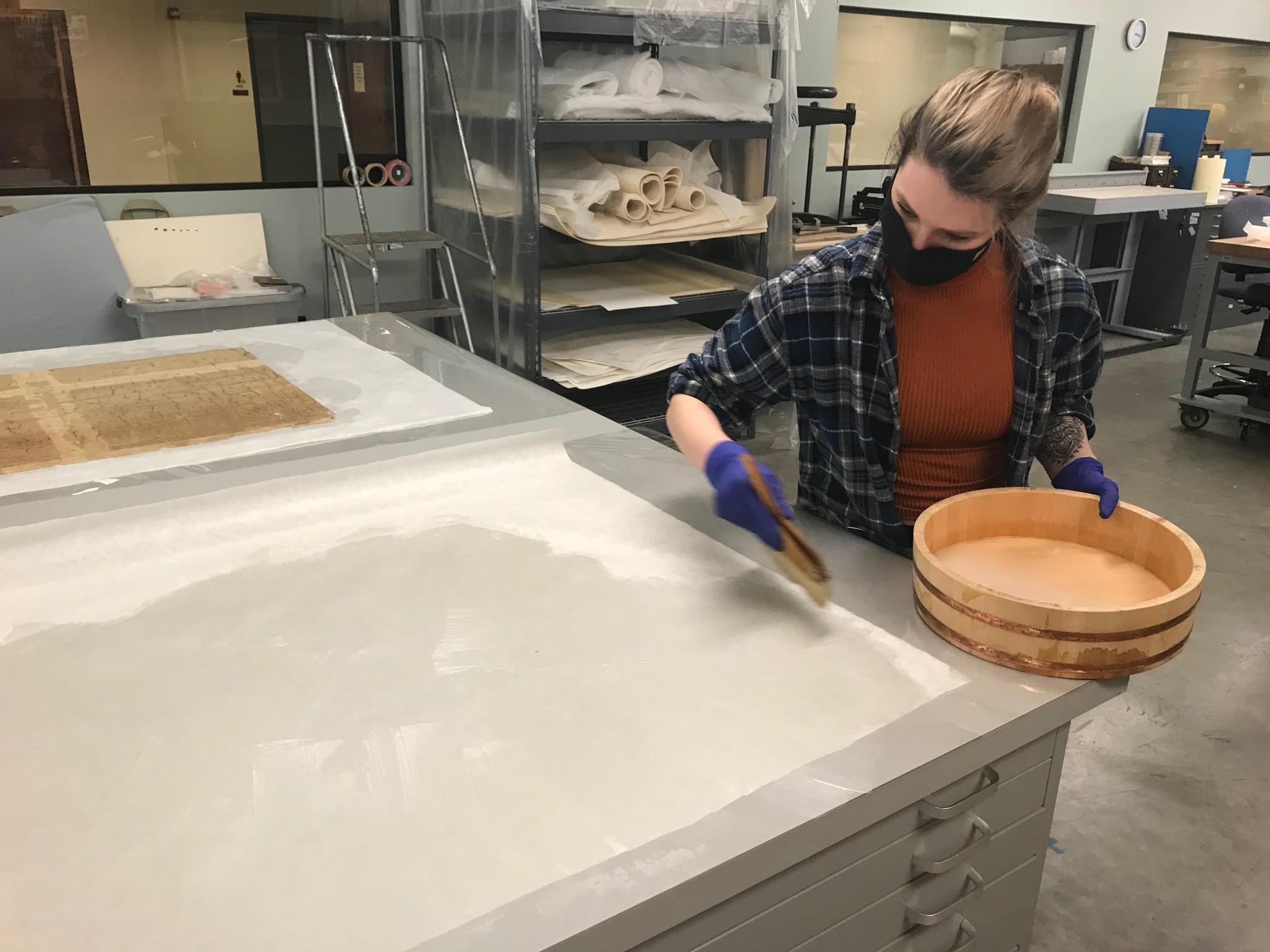 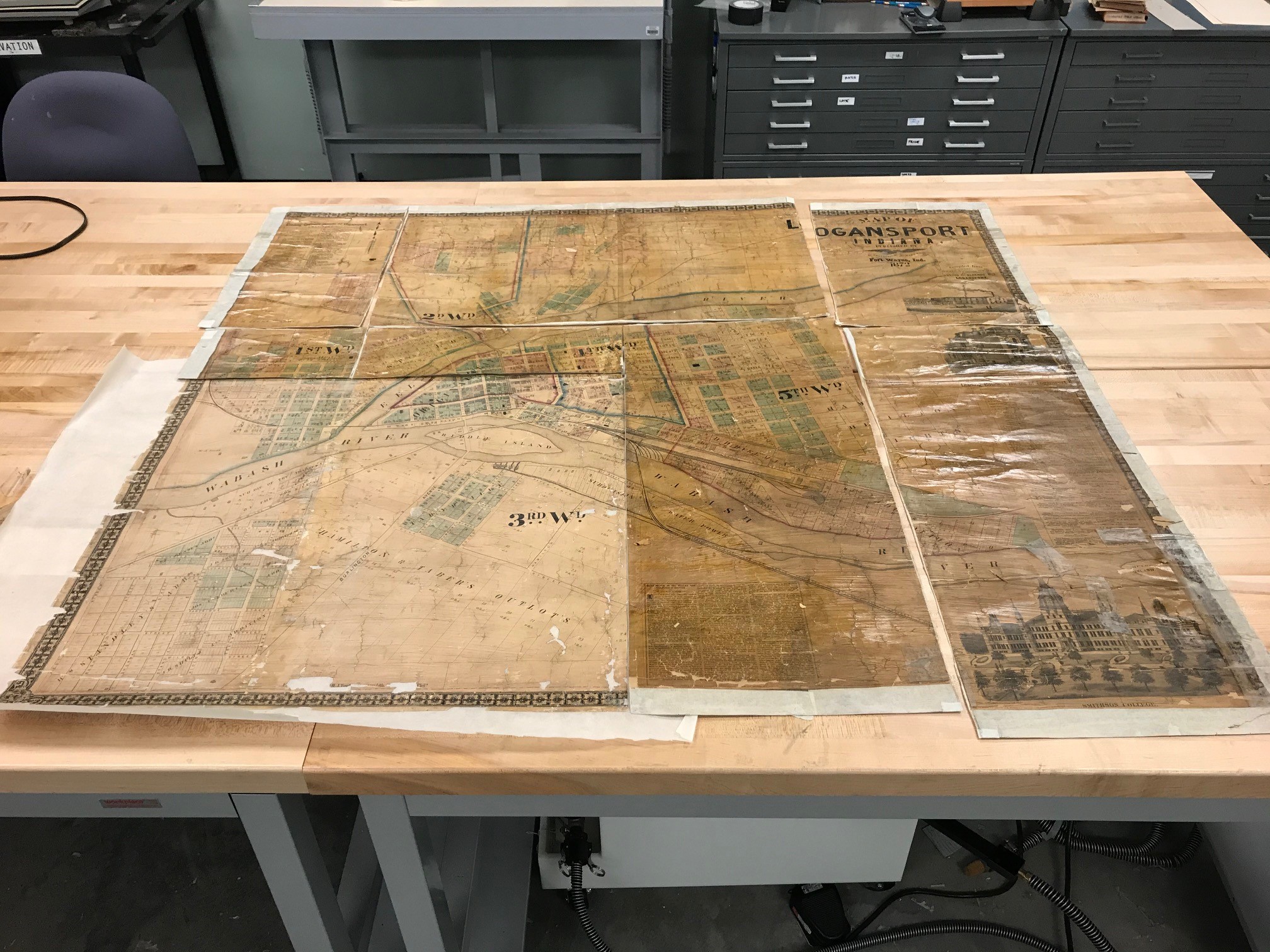 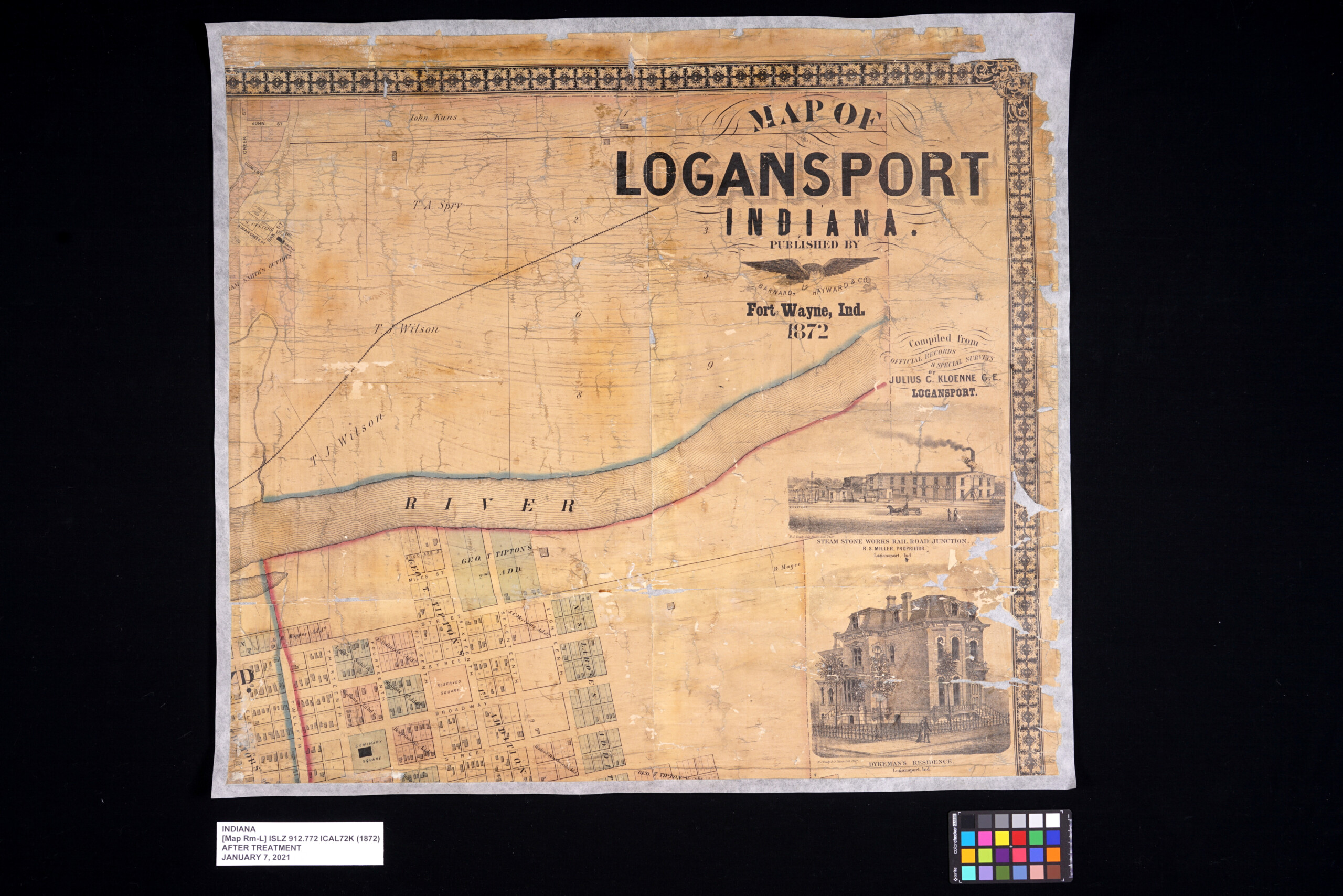 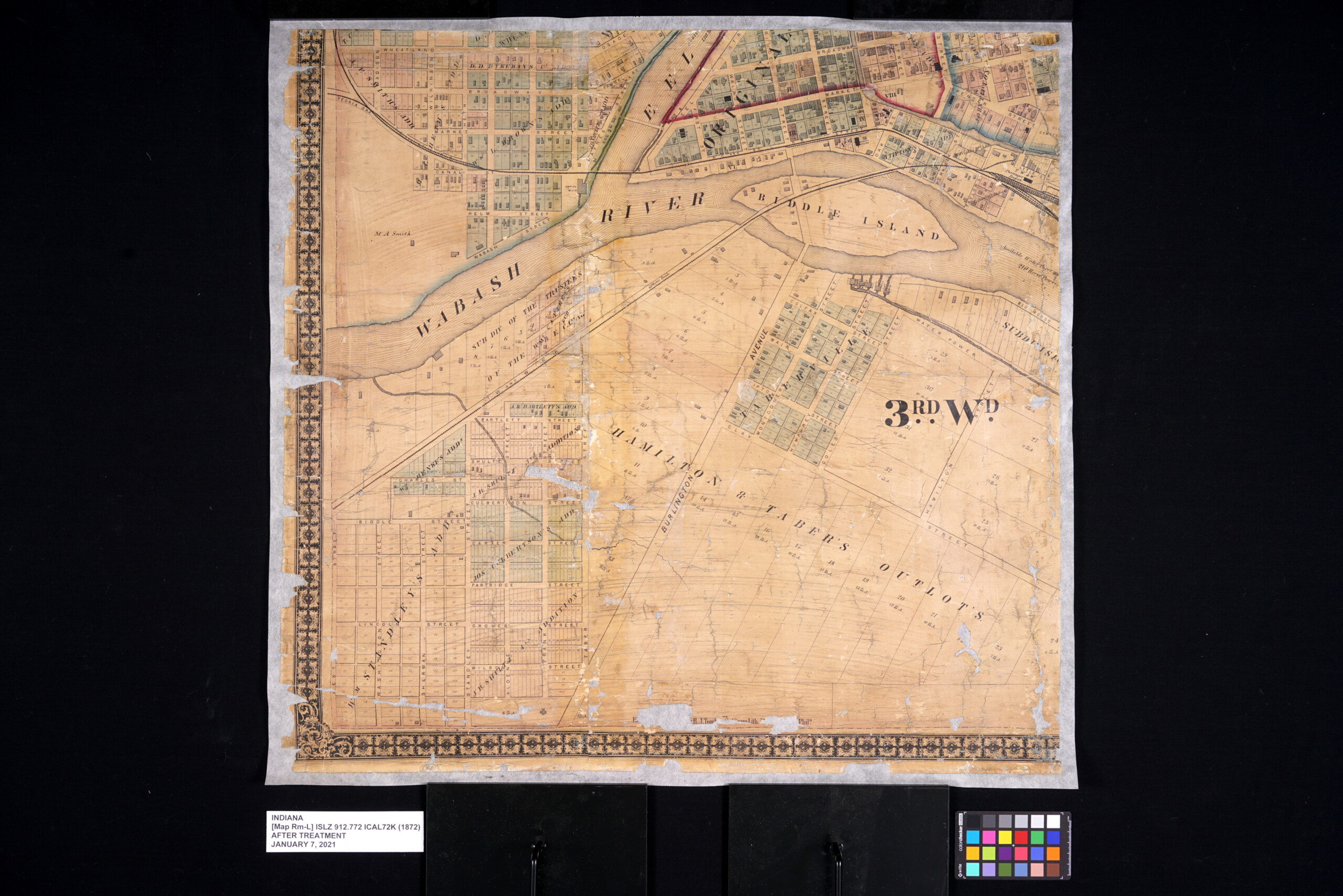 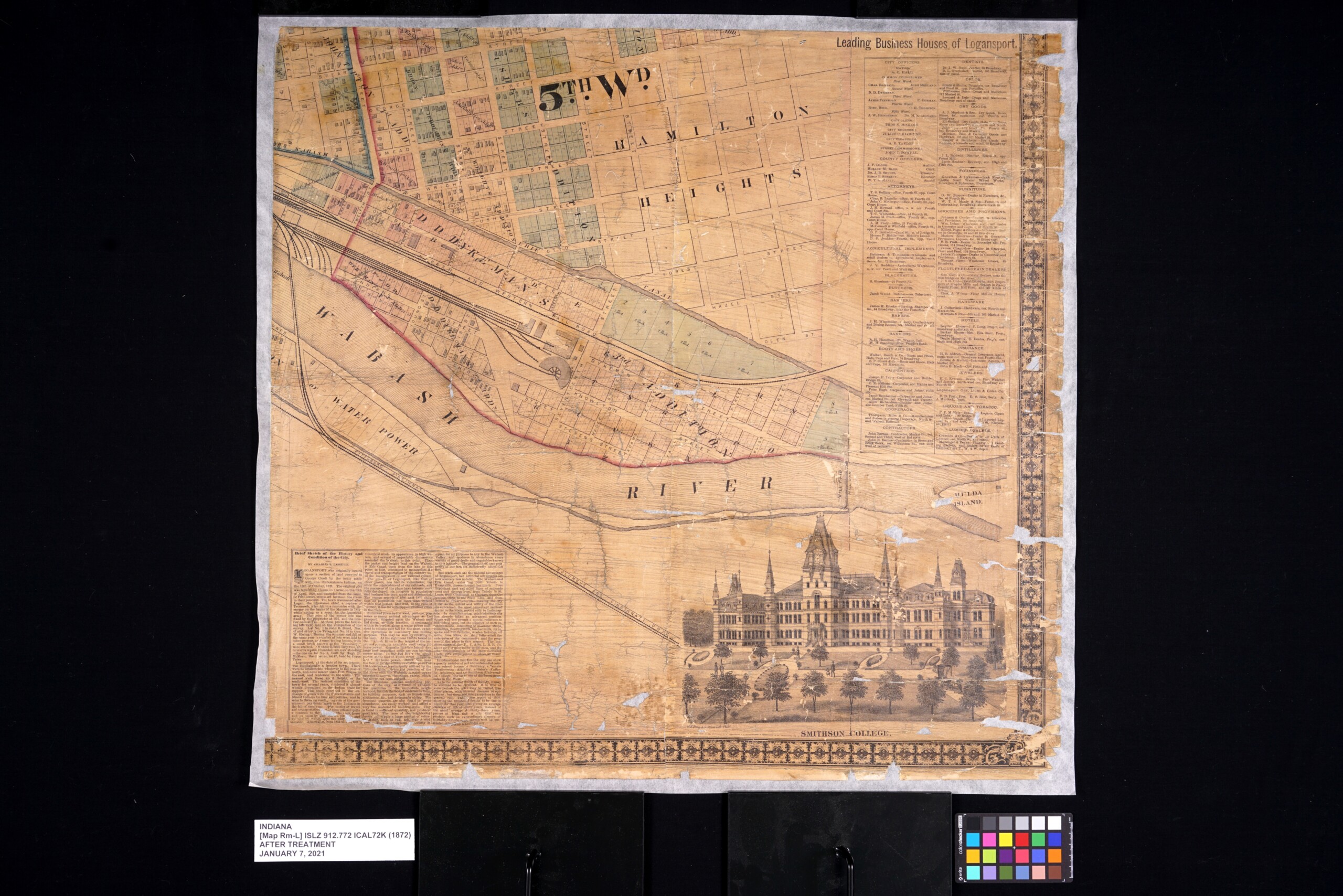 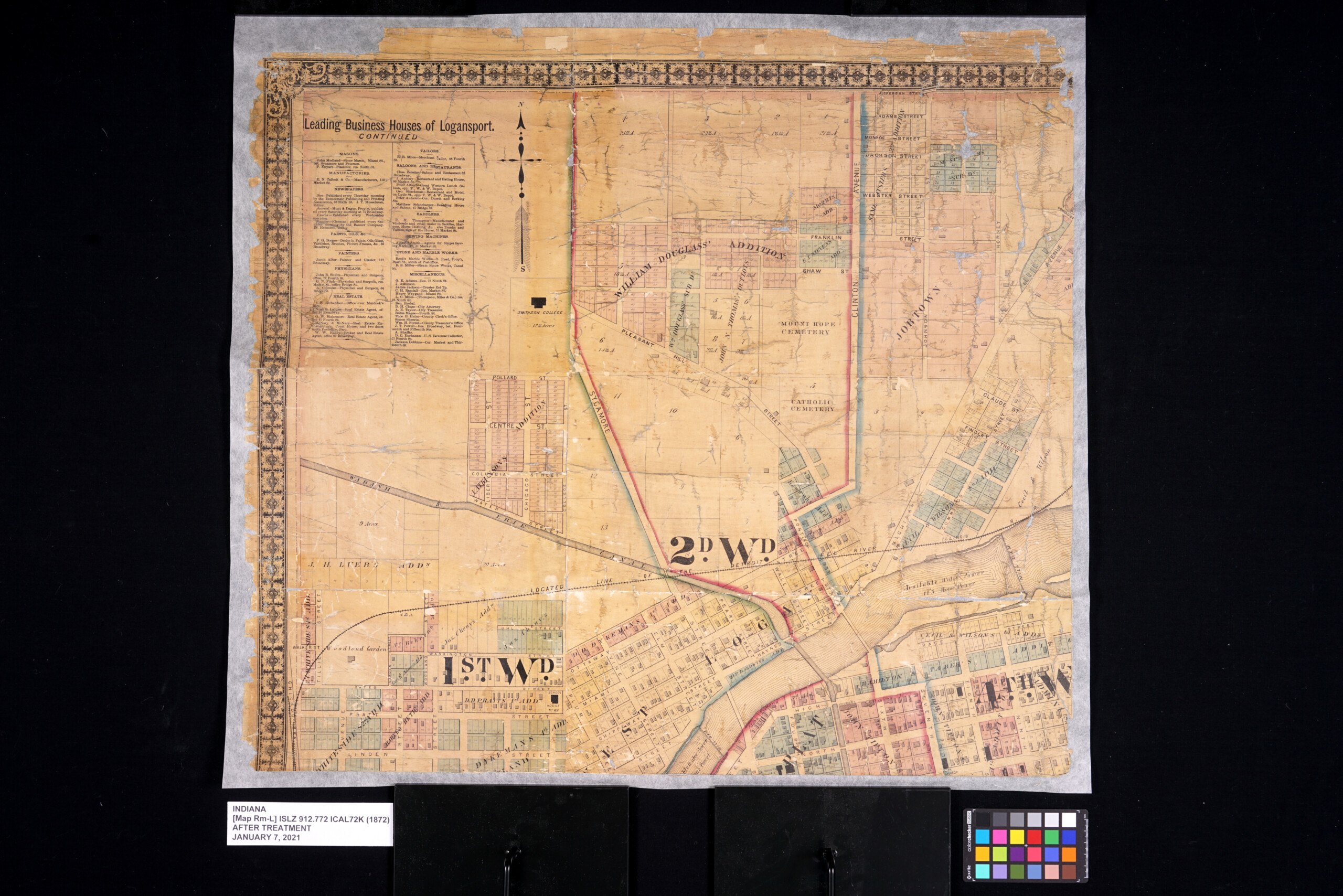 1876 Ohio County Centennial Map
Small in size, but rich in details, this map of Ohio County, Ind. was published to celebrate America’s centennial in 1876. The Ohio County Historical Society notes there were perhaps only 250 made. Surviving copies are quite rare. Ohio County was established just 30 years before this map was made. Notable are references to Native American sites at the time in Ohio County. George W. Morse, the mapmaker, is noted in the Ohio County history books as being present at the archeological digs in the area. He also delivered a historical address at the major Centennial Celebration held in Rising Sun the summer of 1876. The Centennial Independence Day was observed with cannons, bells and a parade. And this map!

This map was in an extremely fragile state. It had suffered lots of losses due to years of use. Like the other two maps it had also been varnished. The map had also suffered extensive water damage at some point resulting in staining throughout the entire sheet. Like the Jefferson map and Logansport map it was also adhered to its original fabric which had become very dirty and frayed.

As with the Jefferson and Logansport maps, the goal for this map was to repair it for stability, safe handling and digitizing. All of the varnish was removed, the map was washed and then re-lined onto a new sheet of Japanese tissue. 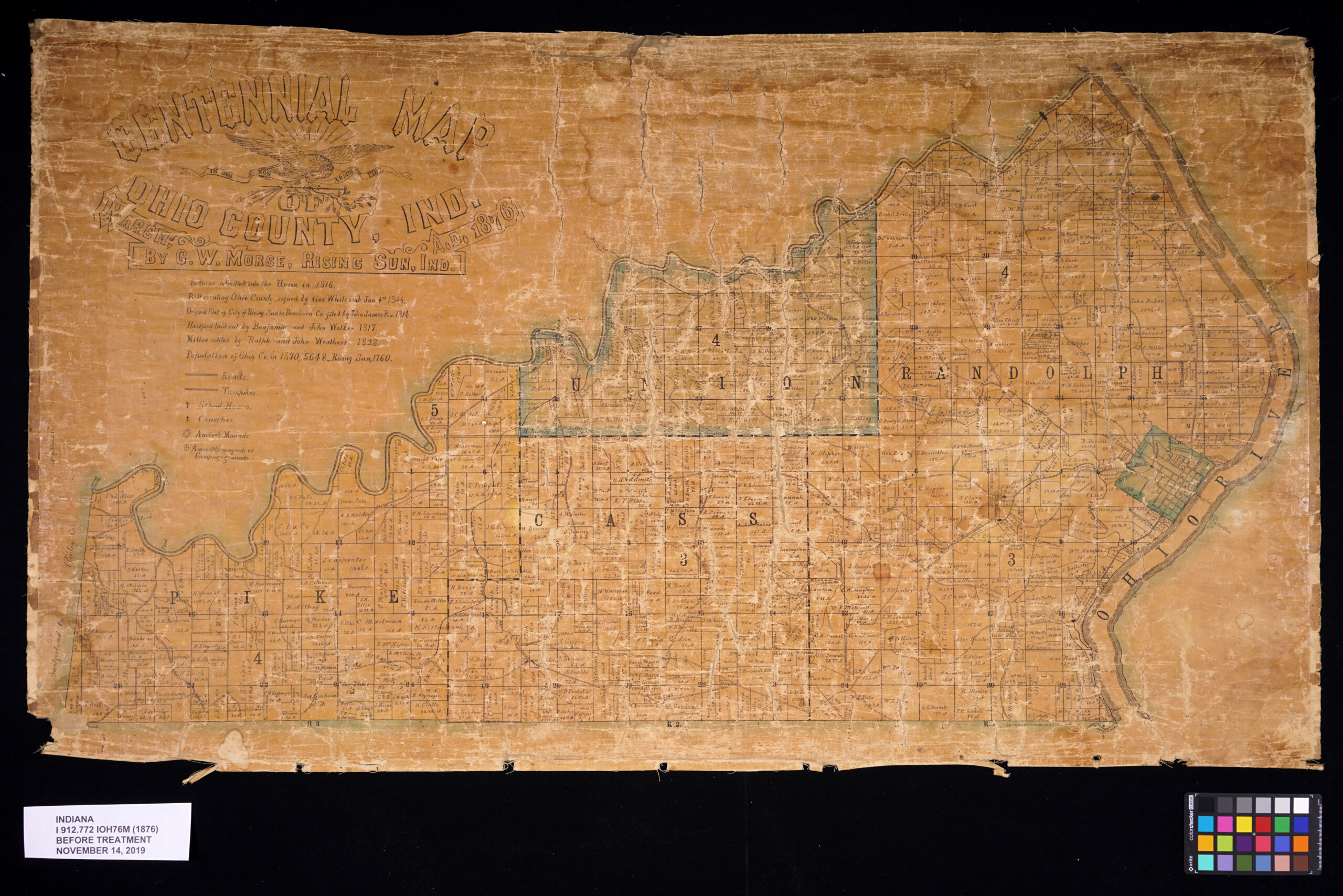 Before treatment of front of the map. 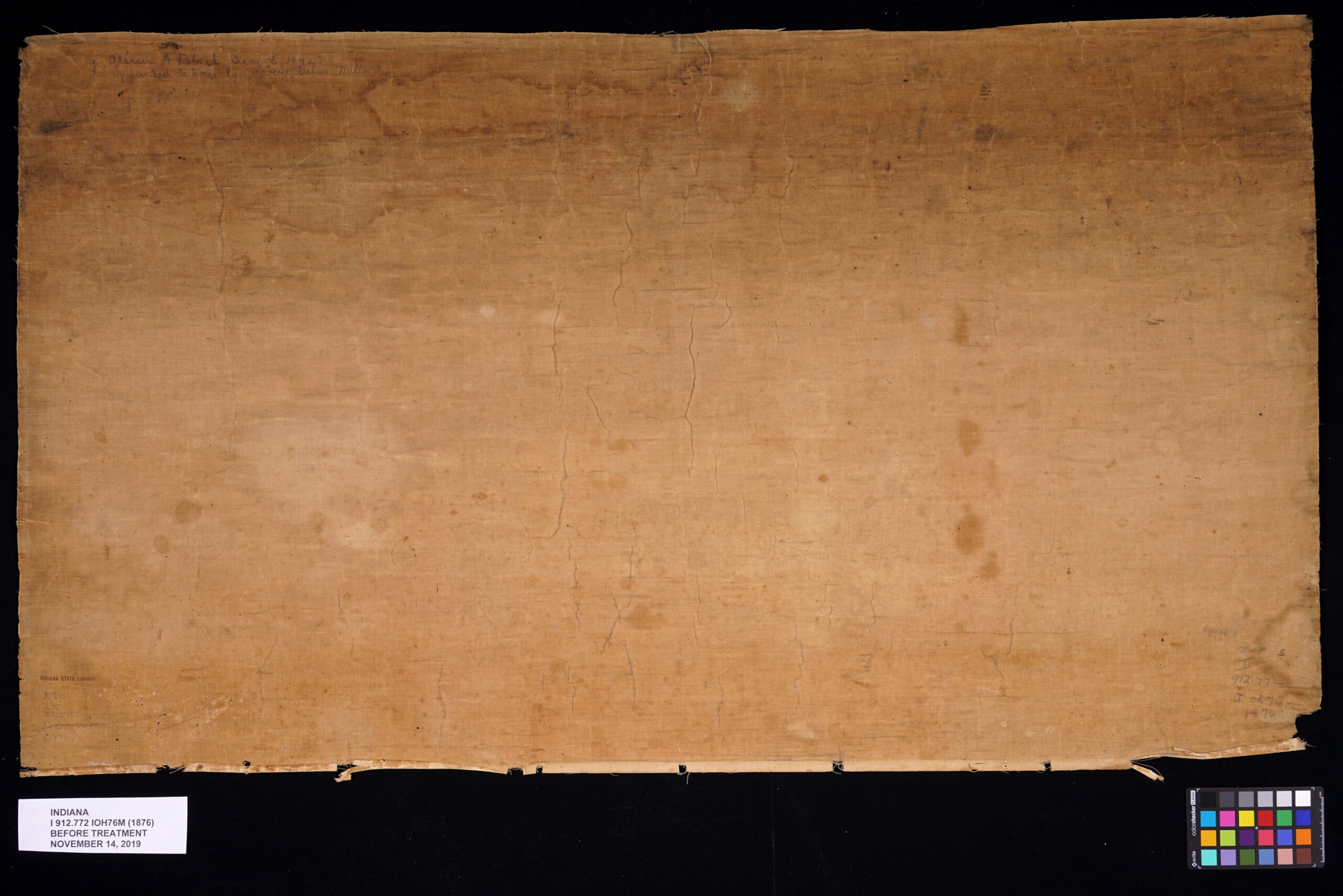 Before treatment of back of the map. 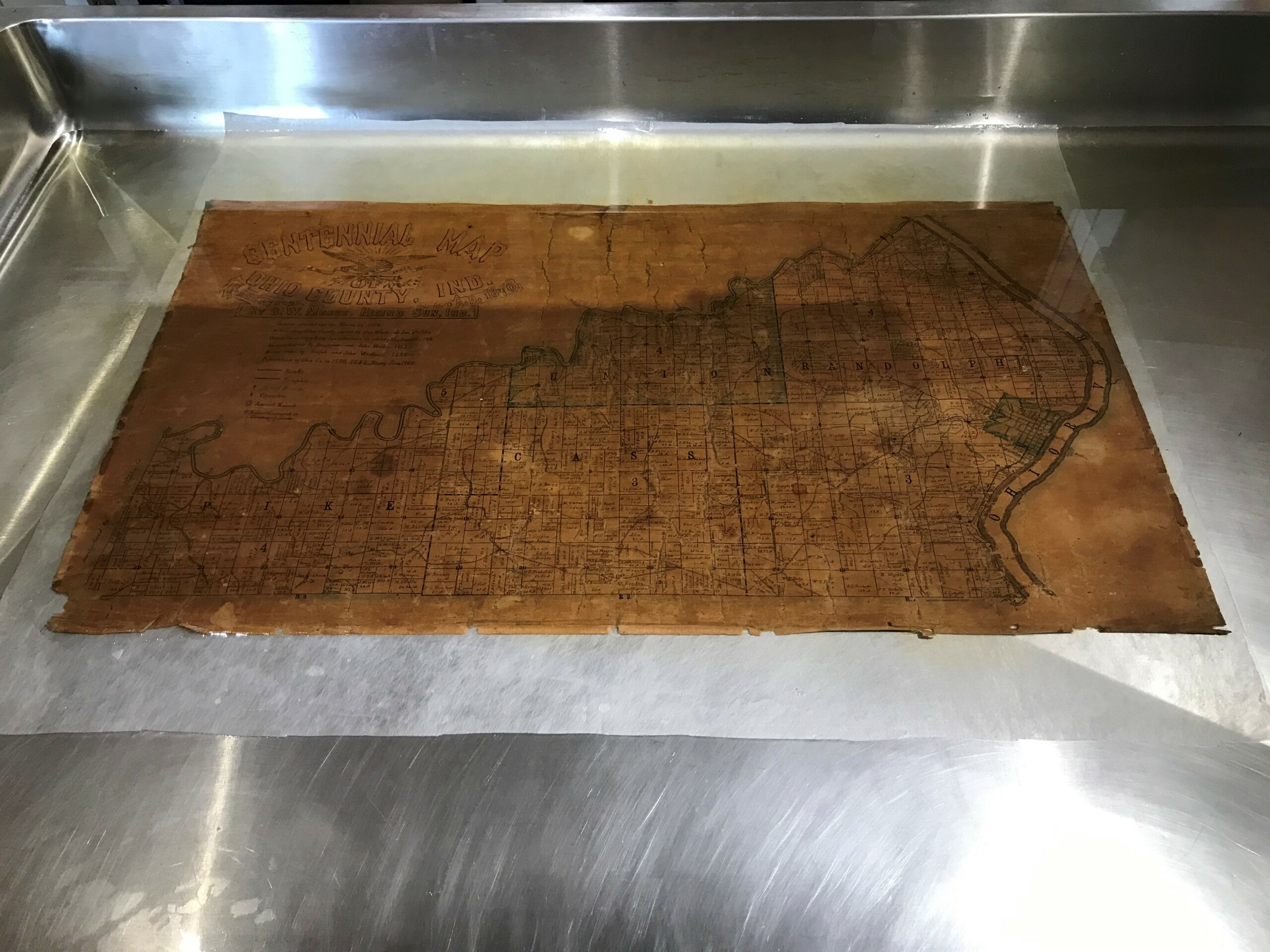 The map being washed. 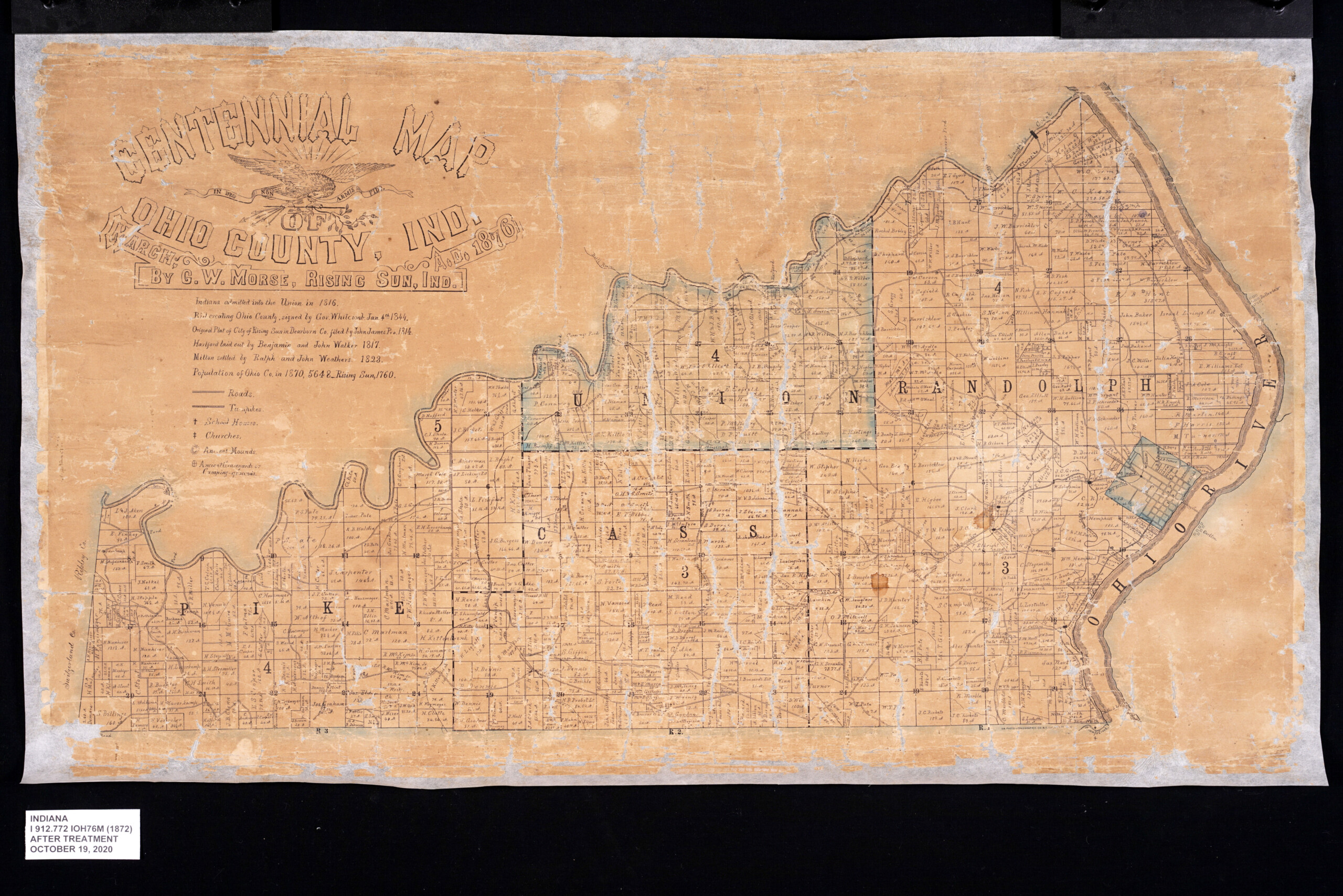 After treatment of the front of the map. 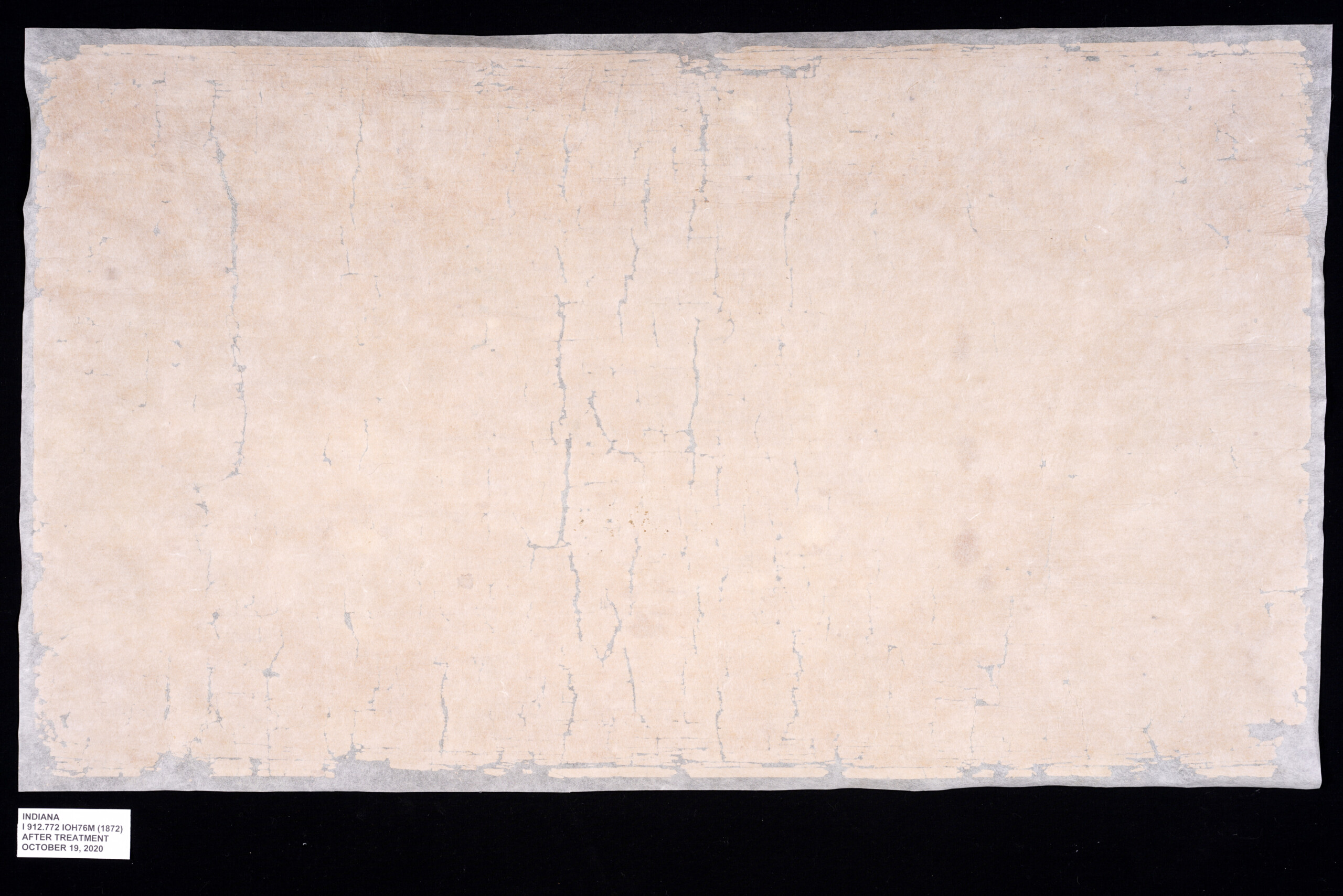 After treatment of the back of the map.

This blog post was written by Conservator Seth Irwin and Monique Howell, Indiana Collection supervisor, both of the Indiana State Library.