As hundreds of thousands of Hoosiers begin to receive their first dose of the COVID-19 vaccine, it is worth remembering that many of them have gone through a rapid mass vaccination program before. When many of today’s senior citizens were children, poliomyelitis – more commonly known as polio – emerged as one of the most dreaded childhood diseases on the planet. While most who contracted the virus survived it, polio could have serious and long-term effects on the central nervous system and could also lead to muscle paralysis.

Much like COVID-19, treatment for polio patients focused on respiratory assistance. Instead of being intubated with modern respirators, children with polio often found themselves in a long, formidable cylindrical tube known as an iron lung which would assist with their breathing. 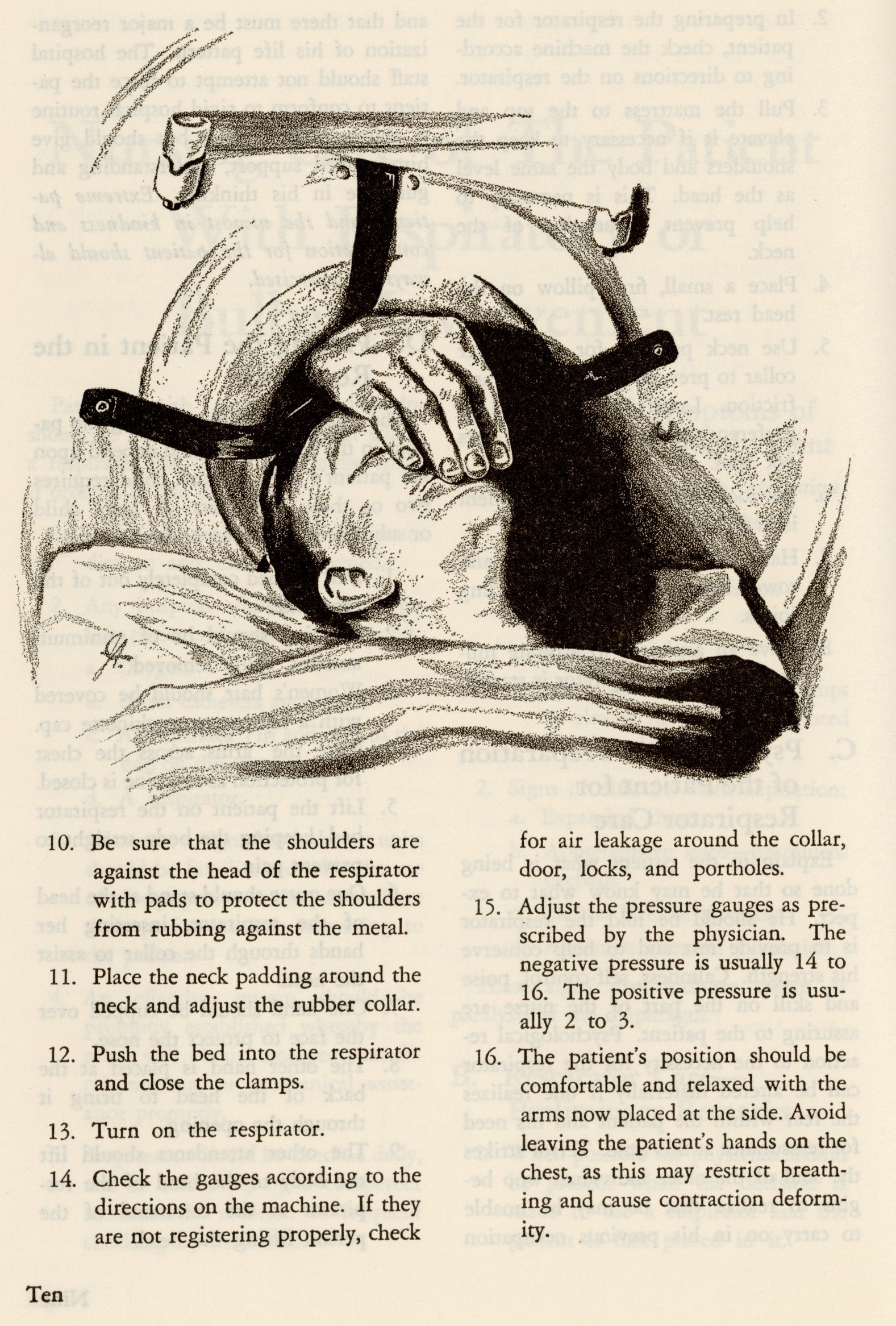 Image and instructions on operating an iron lung from “Recommendations on nursing procedures and techniques in hospitals treating poliomyelitis cases of the Indiana Polio Planning Committee” (Indiana Collection, ISLO 610.73 no. 32).

In the late 1940s and early 1950s, outbreaks of polio across the United States caused widespread panic. Schools were temporarily shuttered, public swimming pools closed and other activities for children were cancelled as parents desperately tried to prevent their children from contracting the disease. The country was desperate for a vaccine. 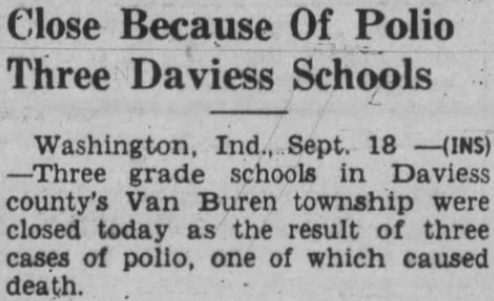 Jonas Salk first developed his polio vaccine in 1952. Mass testing began in 1954 and on April 12, 1955, the vaccine was declared successful and ready to be distributed to the general public, a medical feat which made the front page of many Indiana newspapers.

The Kokomo Tribune, April 12, 1955. From newspaperarchive.com.

Then as now, public health officials had to decide how to prioritize vaccine distribution. Children under 10 years of age, particularly those in grades 1-4, were considered most vulnerable to contracting the disease and were therefore scheduled to receive the vaccine first. And like the current iterations of the COVID-19 vaccine, multiple shots were needed to achieve full immunity. 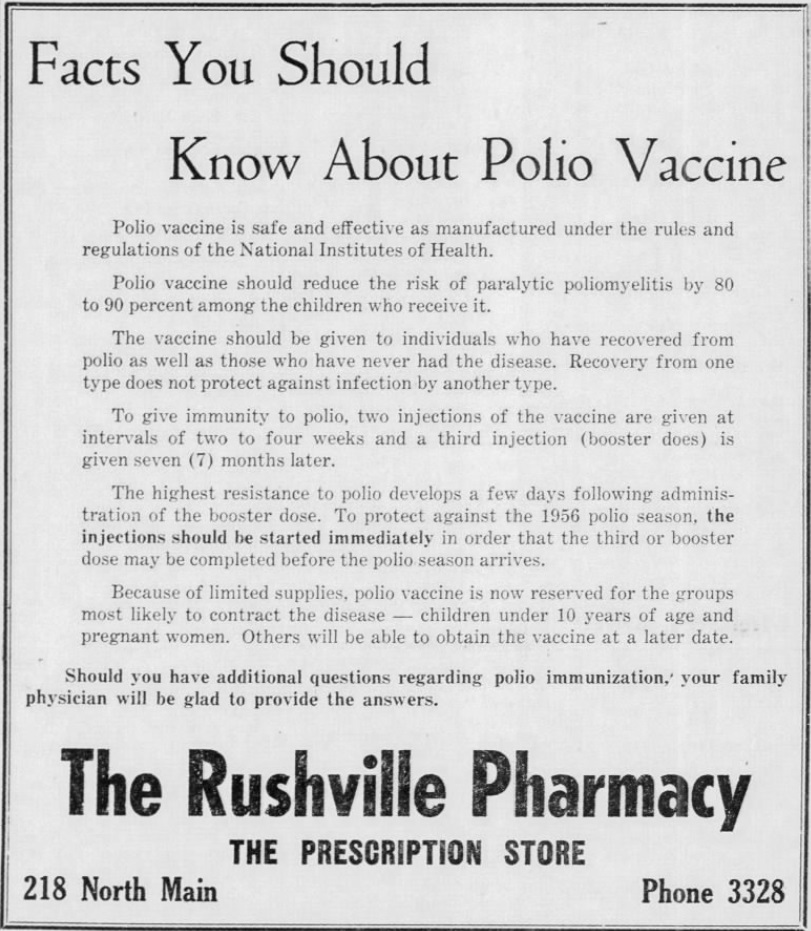 Advertisement from the Rushville Republican, Jan. 20, 1956. From newspapers.com.

Once the vaccine was deemed effective, manufacturing went into overdrive. Indianapolis-based Eli Lilly was one of a handful of U.S. pharmaceutical companies to produce the vaccine. In 1955, Lilly produced over half of the vials used in the United States during the initial vaccination push. 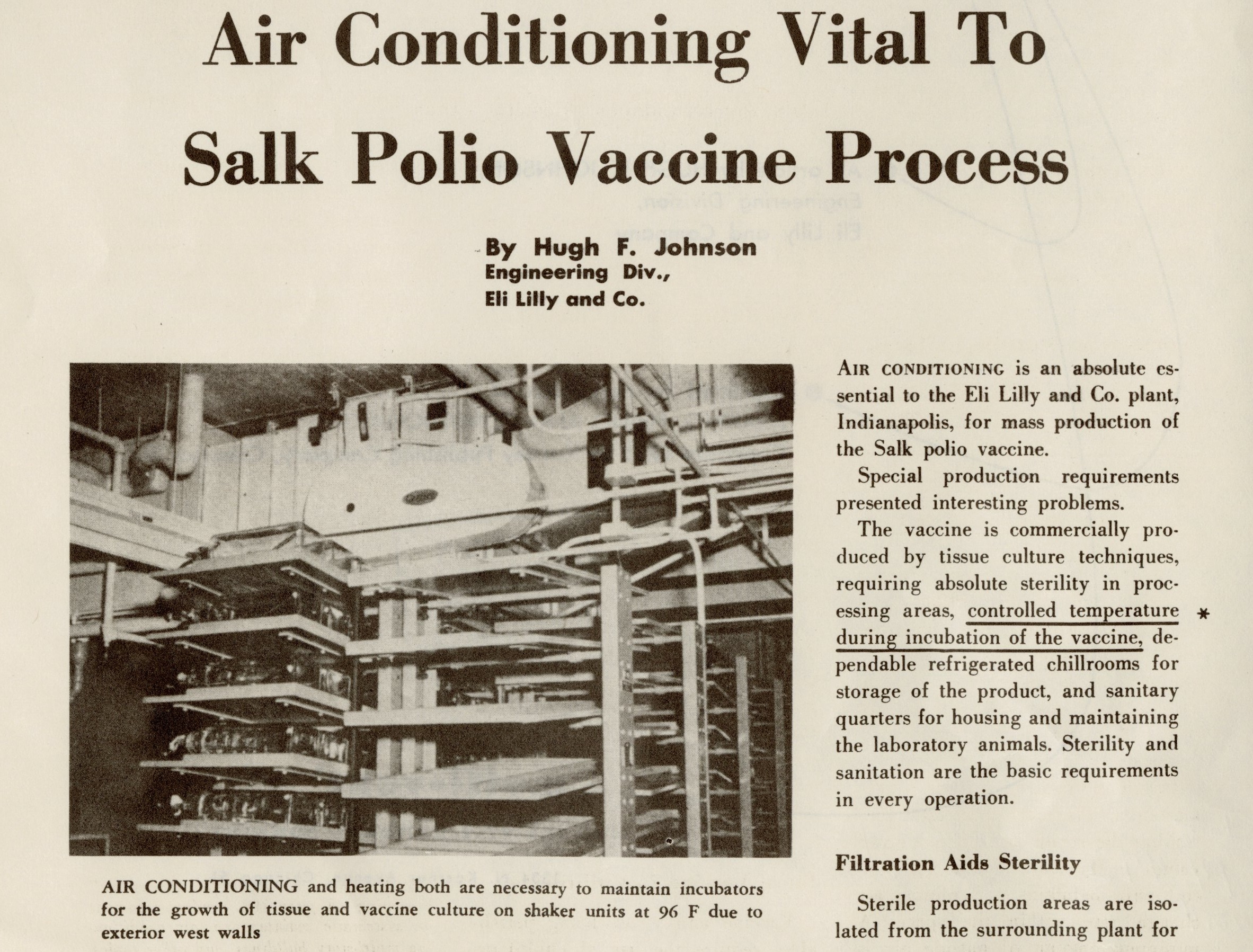 Beginning soon after the public proclamation of the vaccine’s effectiveness in 1955, Hoosier school children quickly lined up at county hospitals, health clinics, or – in many cases – their school gymnasiums to receive their first shot. 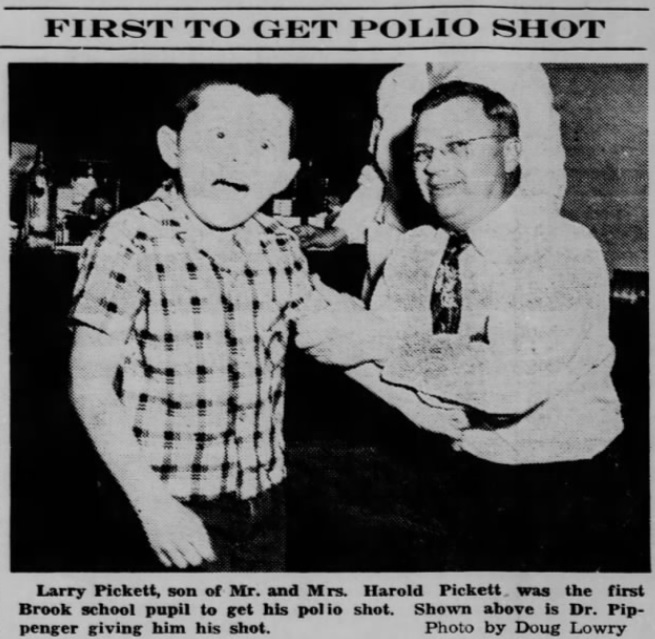 Thanks to the vaccine and the mass mobilization of public health officials, healthcare workers, pharmaceutical companies, parents and children, polio was dramatically reduced in the United States by 1961 and is no longer considered the threatening childhood disease it once was.

Many of the children who lined up in their school gymnasiums in the 1950s are now in their seventies and are considered most vulnerable to the debilitating effects of COVID-19. They once again find themselves near the head of the line for a brand-new vaccine created to stop a dire public health pandemic. Instead of standing in literal lines at their local school, they must now navigate a virtual line to sign up for an appointment at a local health facility. As of this writing, nearly a million Hoosiers have received the vaccine.

For more information on the COVID-19 vaccination program in Indiana, click here.