Did you know that you could take a guided tour of the beautiful Indiana State Library and Historical Building? We offer three different tours: an architectural tour, where you can learn more about the many architectural features of the building; a researcher’s tour that will take you behind the scenes to point out facets of our various collections; and a tour for family historians. This is not a “how-to-research” session; instead, this is your opportunity to have an in-depth tour of the facility’s genealogical holdings. 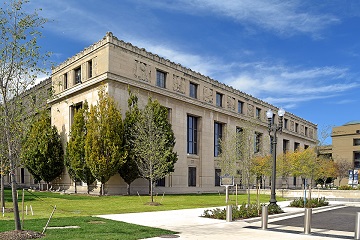 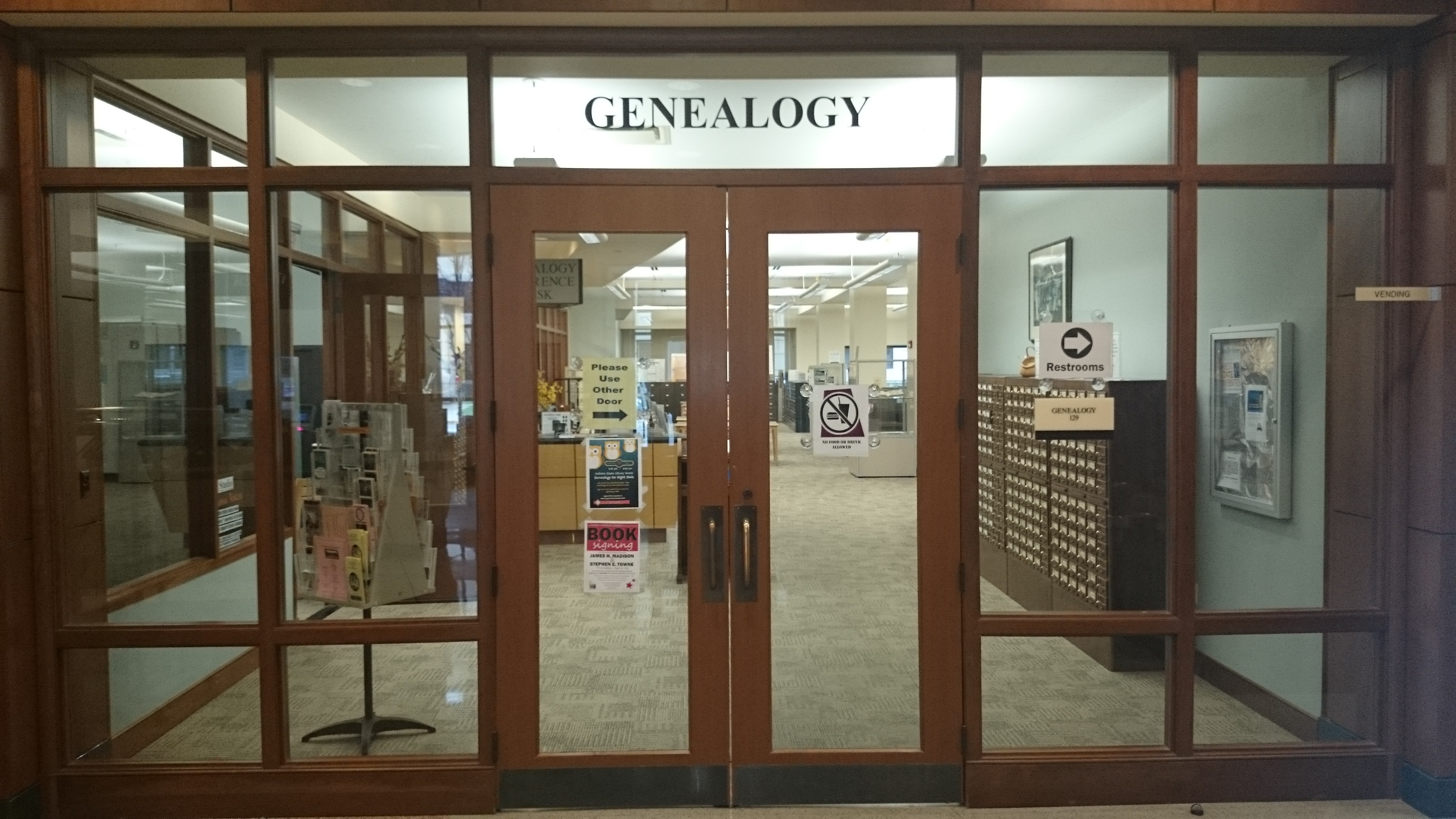 The library was originally established in 1825 and housed in various locations until 1934. The library was one of first six state libraries established in the nation. Originally intended to meet the needs of the General Assembly and other state offices, the volume of materials and expanded public services has made it a premier research facility. Housed in the various statehouses, by the late 1920s the collection had grown so large that materials were being stored in hallways of the capitol. In 1929, the General Assembly raised a special tax to fund construction of a separate building and construction began in 1932. The building opened in 1934 at a final construction cost of $982,119.87. The building is now on the National Register of Historic Places. 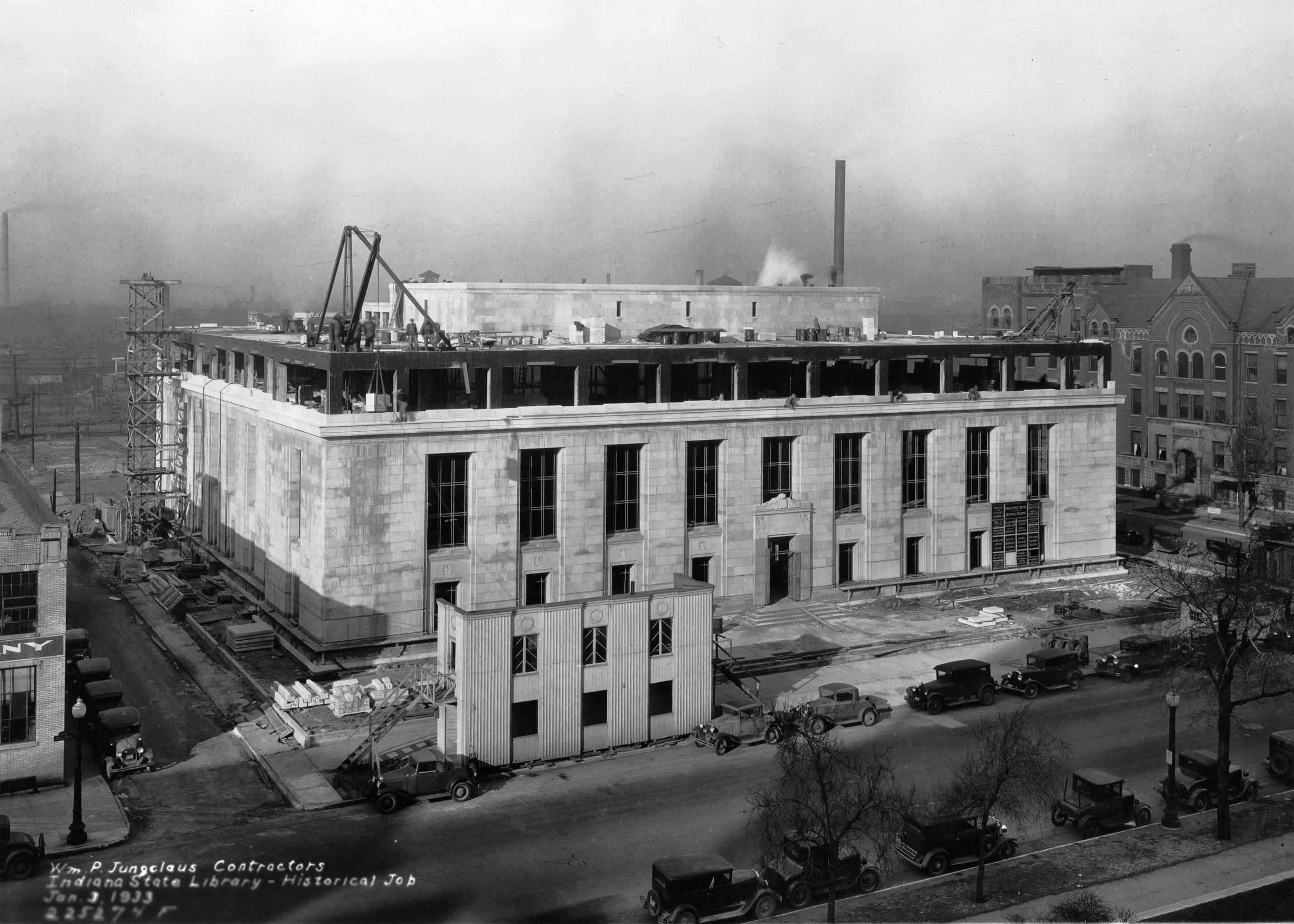 Designed by the architectural firm Pierre & Wright, the Indiana limestone façade of the building is Neoclassical Revival in style, but with strong Art Deco influences. The exterior includes bas-relief panels with carvings by Leon Hermant of Chicago. The panels tell the story of the settlement and development of Indiana with different types of citizens: an explorer, soldier, pioneer, farmer, legislator, miner, builder, constructor, manufacturer, educator and student. 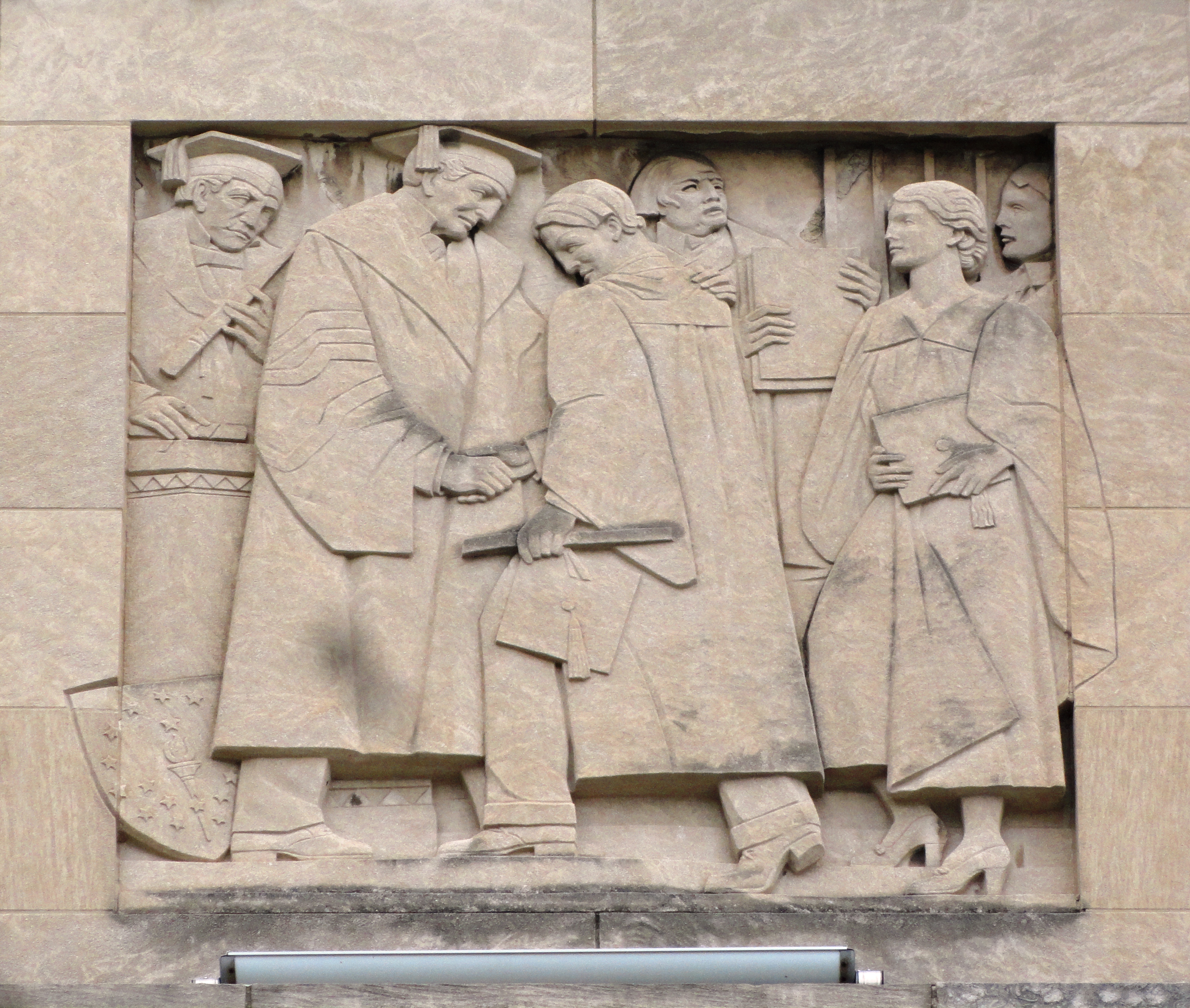 The interior walls are Monte Cassino sandstone, quarried from St. Meinrad in Southern Indiana, and Indiana walnut, giving the library warm colors. The stairs lead up to the Great Hall with a 42-foot barrel vaulted coffered ceiling. 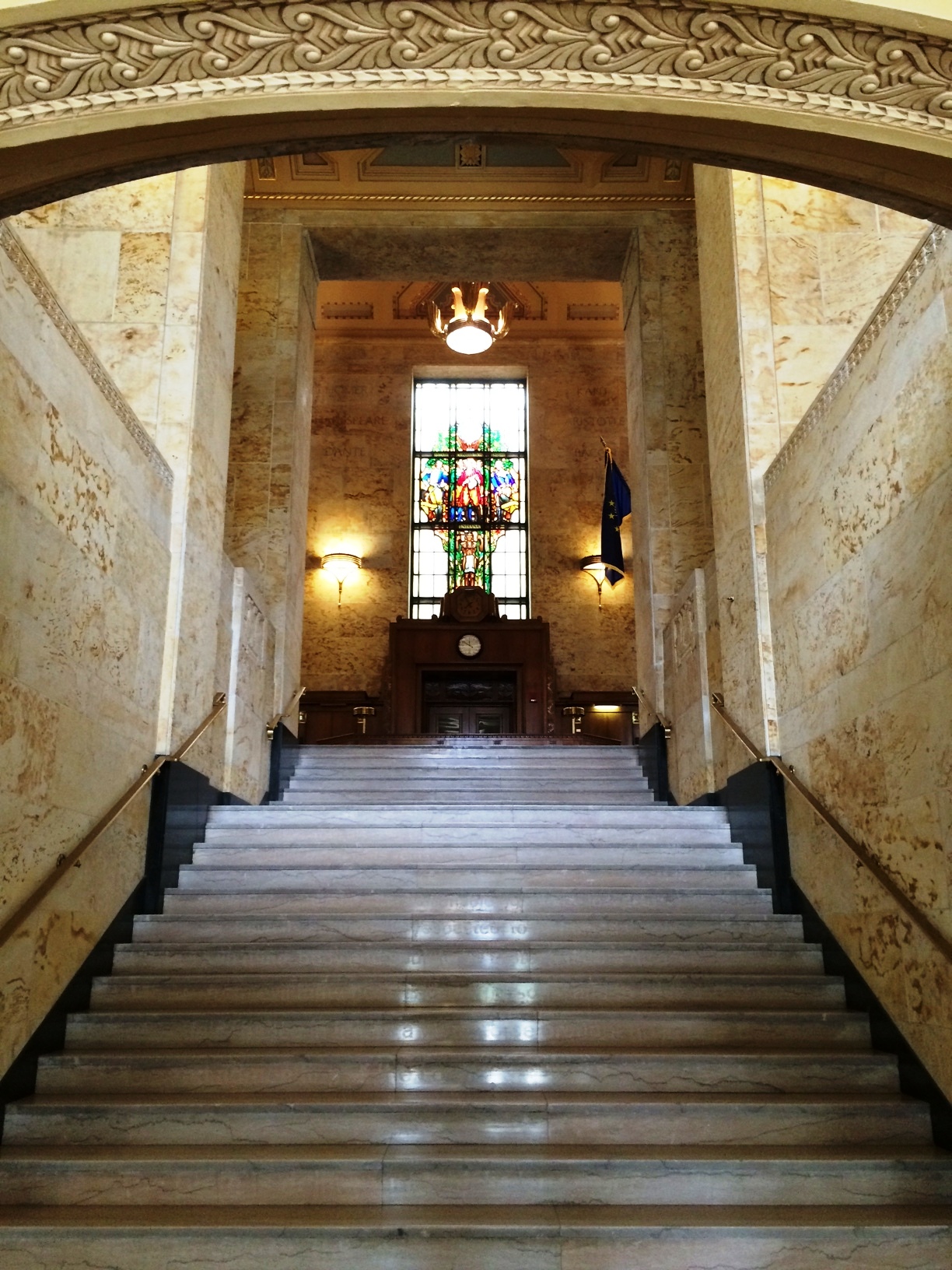 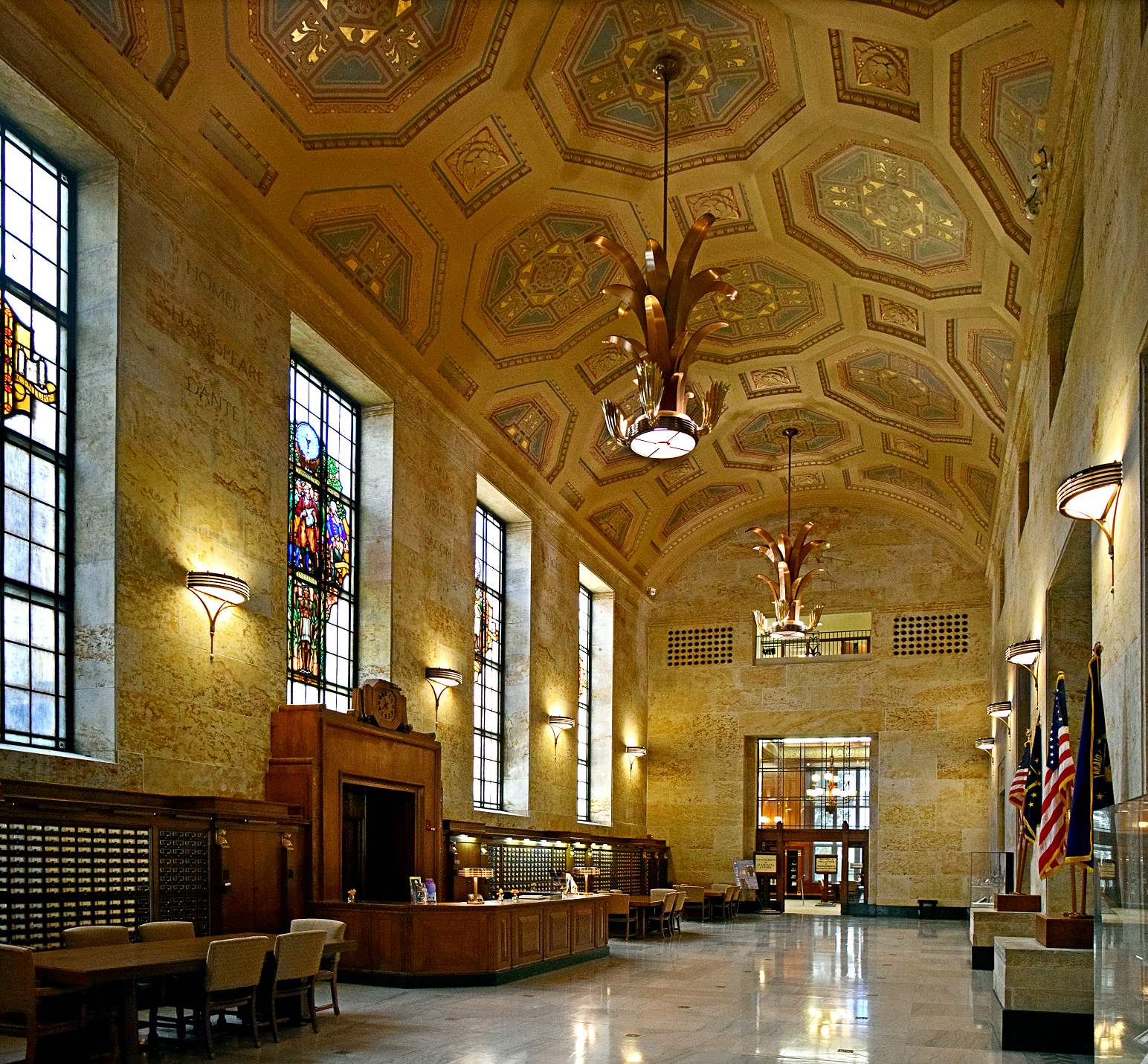 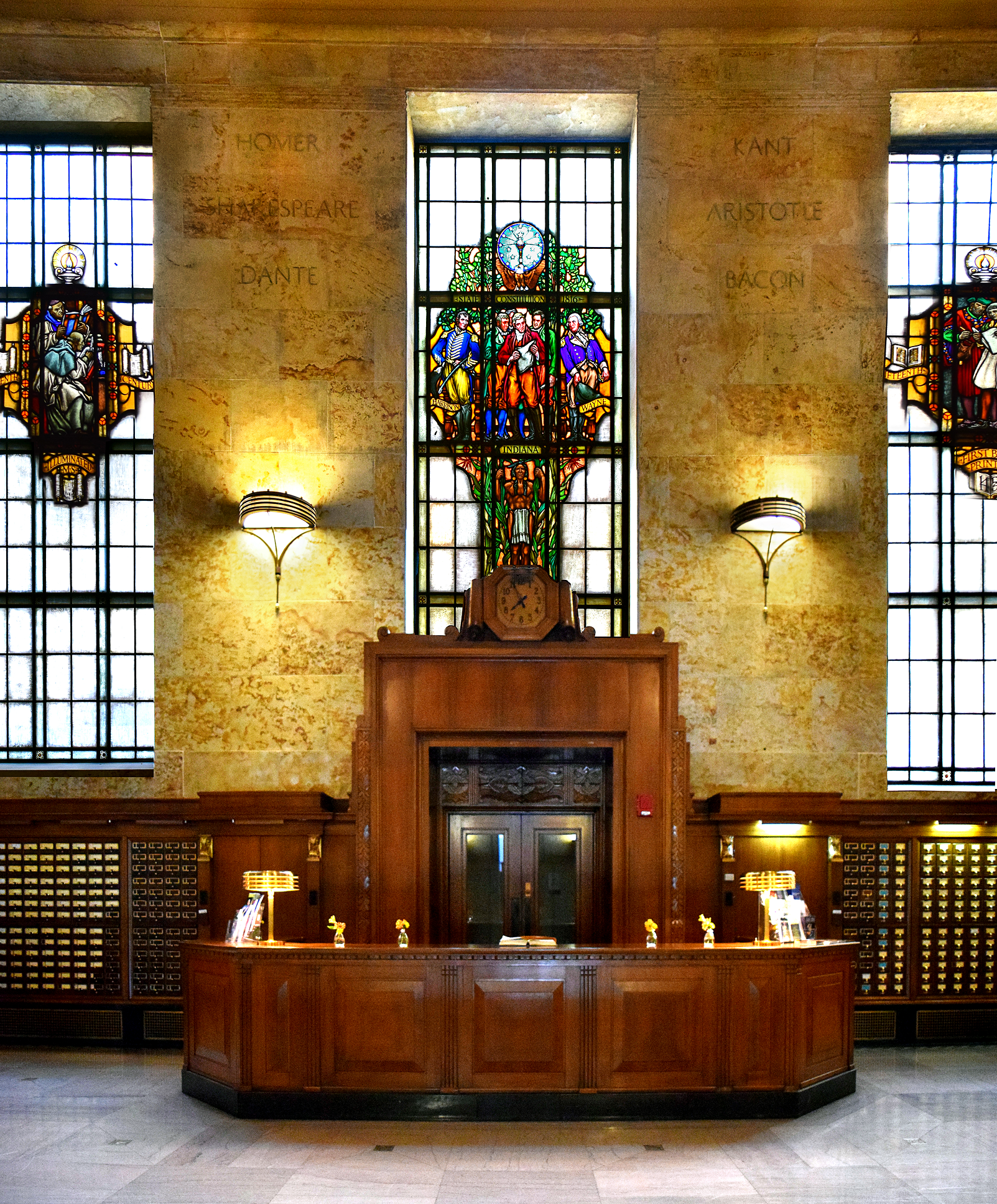 The other four windows depict the transmission of knowledge throughout history, oral traditions, picture writing, illuminated manuscripts and Gutenberg reading a printed page. 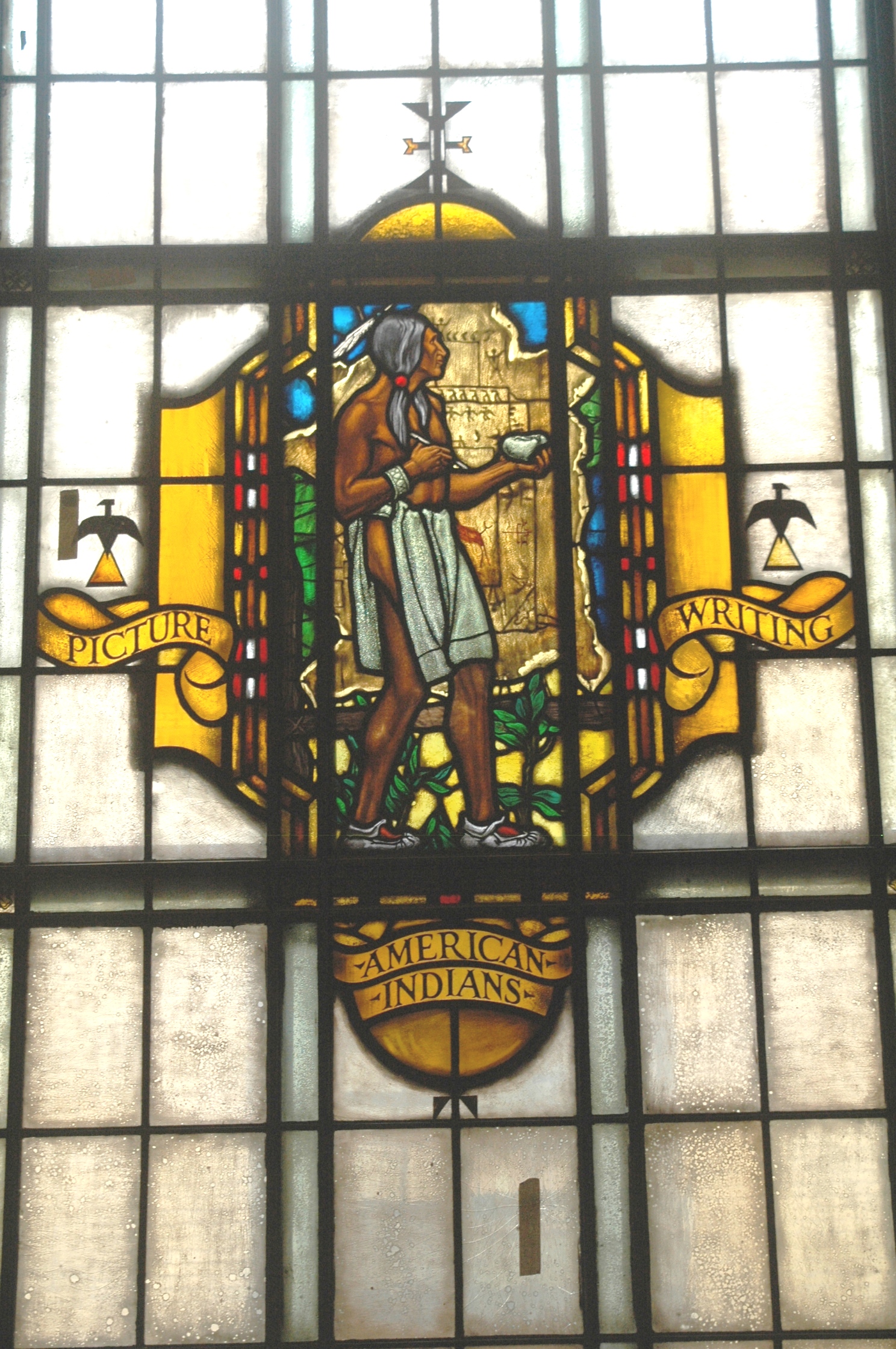 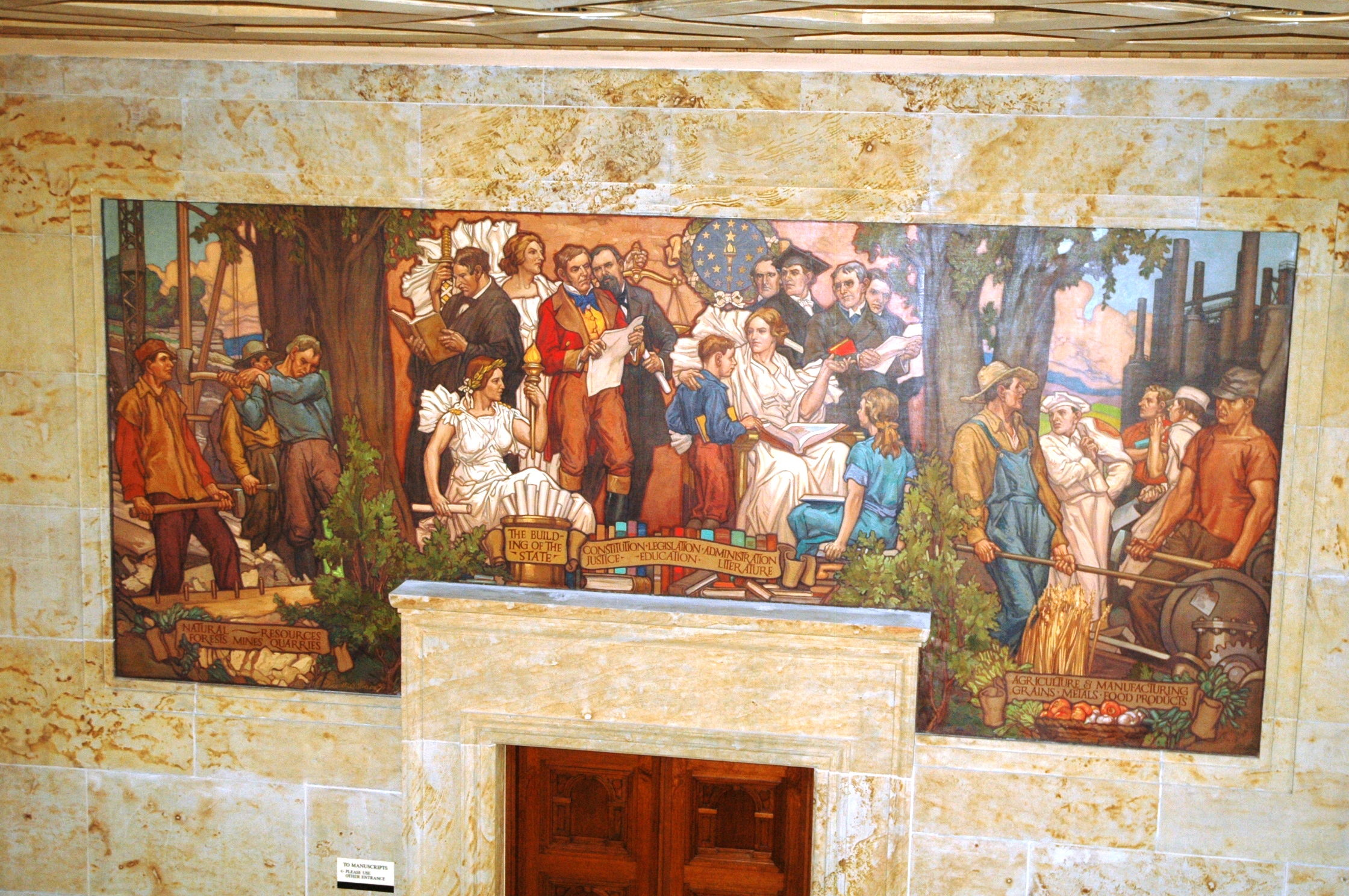 The Great Hall has elaborate Art Deco lighting with a marble floor with small brass squares representing coins of many foreign nations. 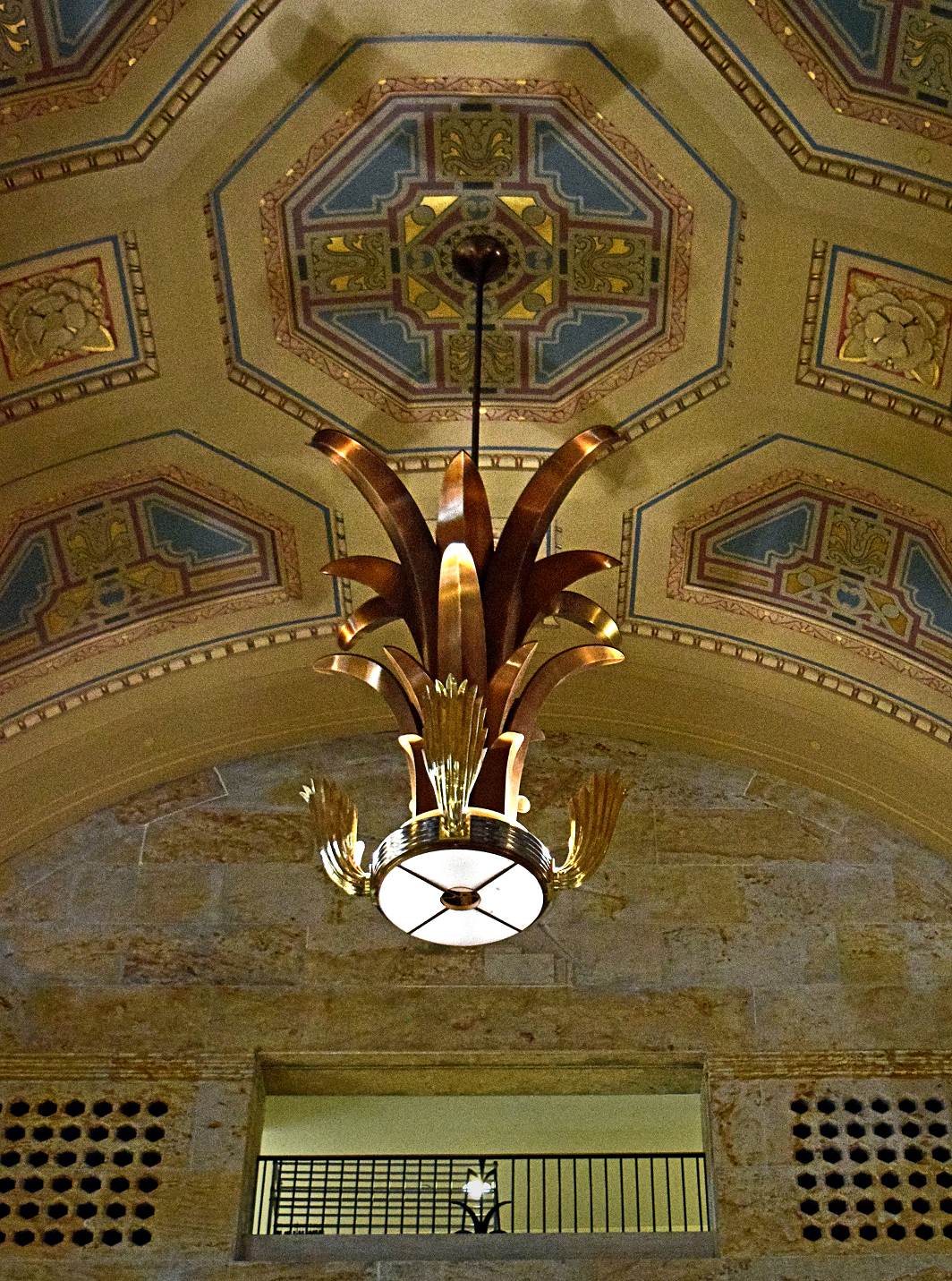 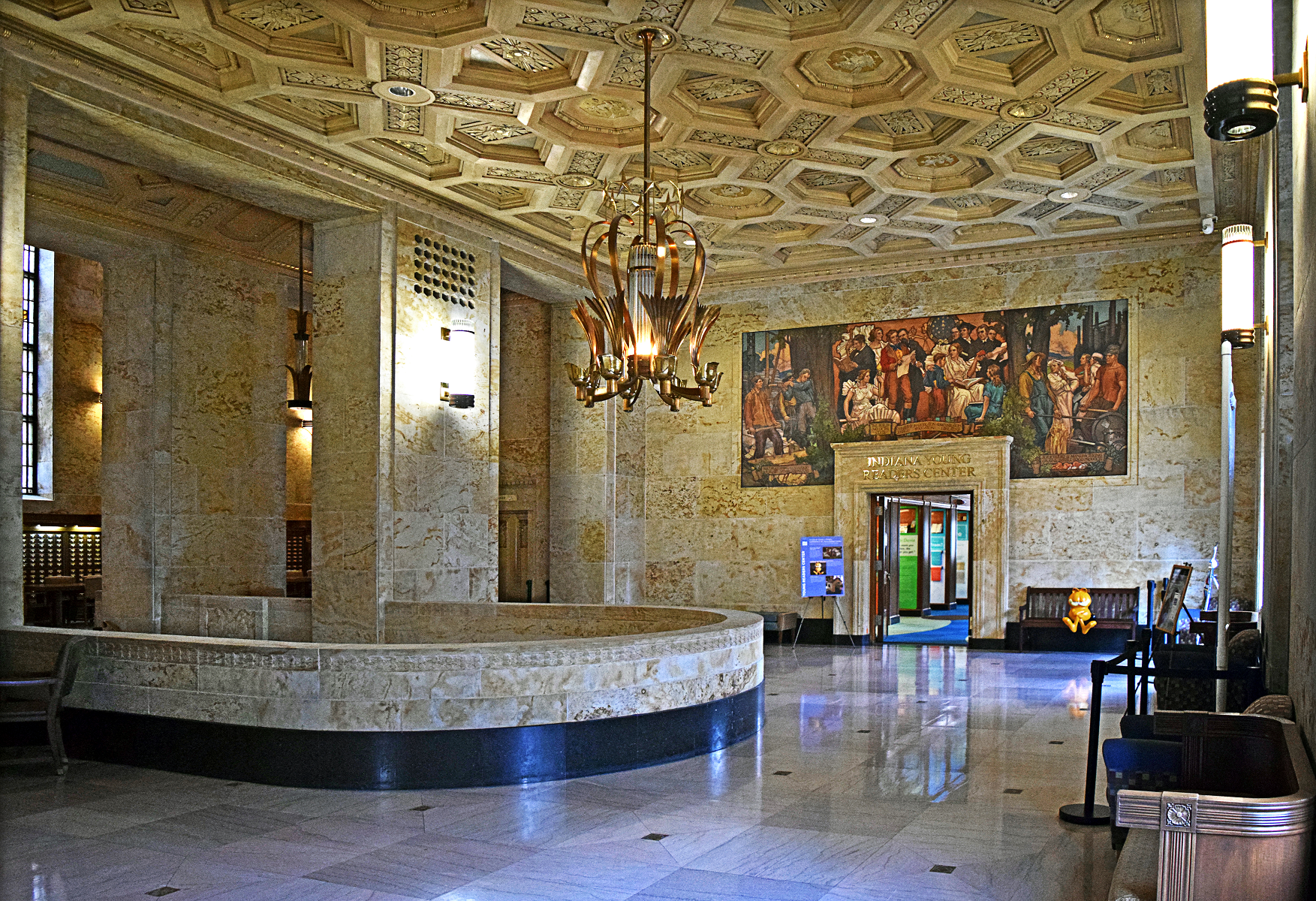 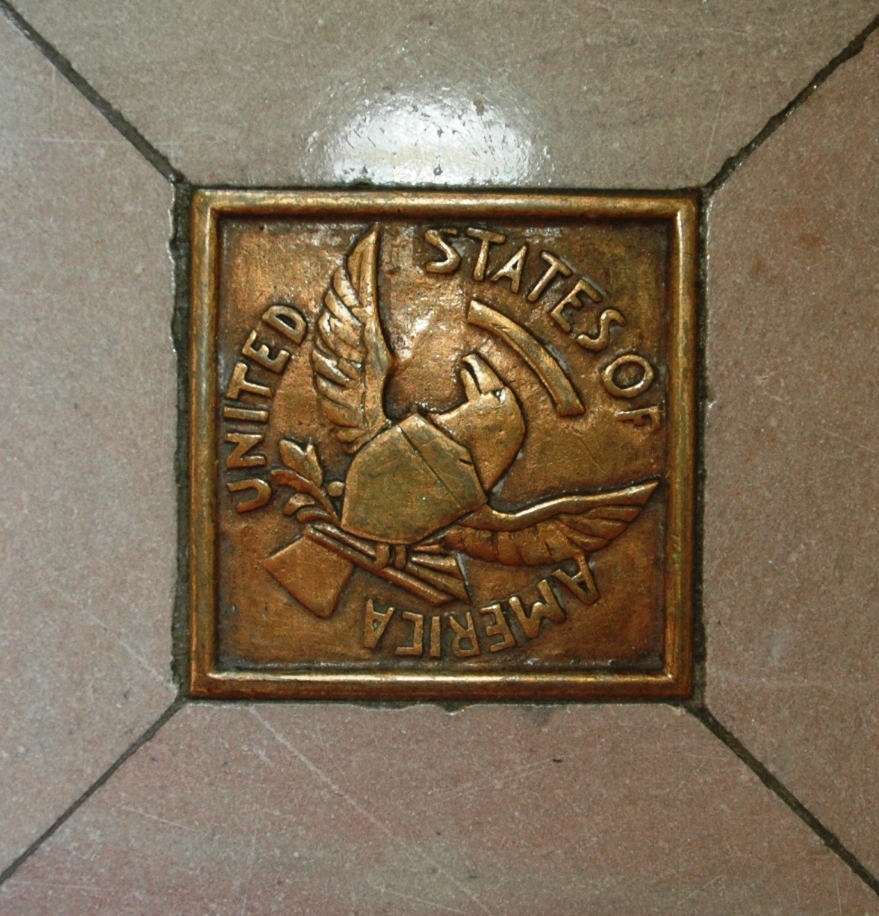 The owl, a symbol of wisdom, is at the Senate Ave. entrance to the library and Art Deco owl heads are on display throughout main rooms. 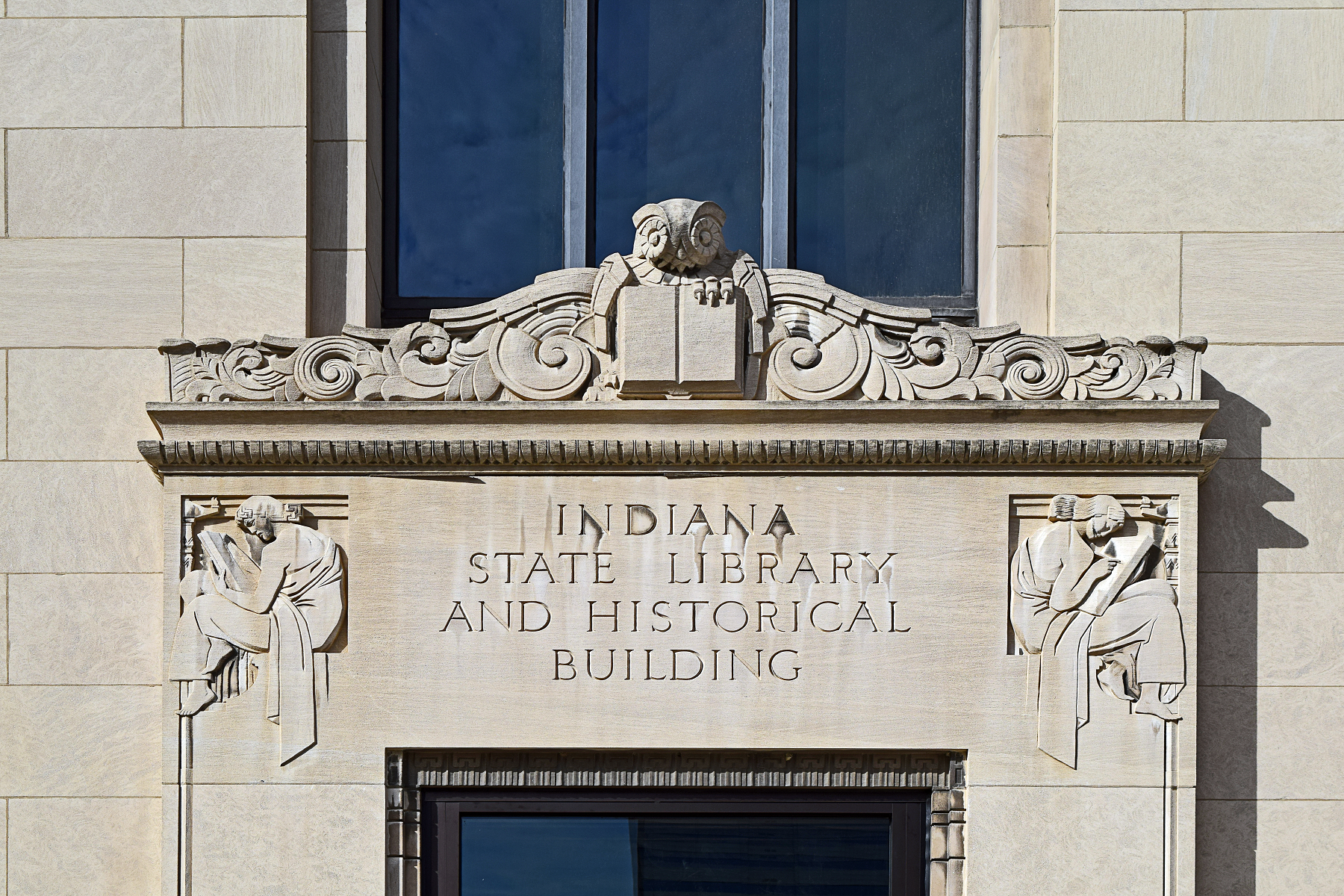 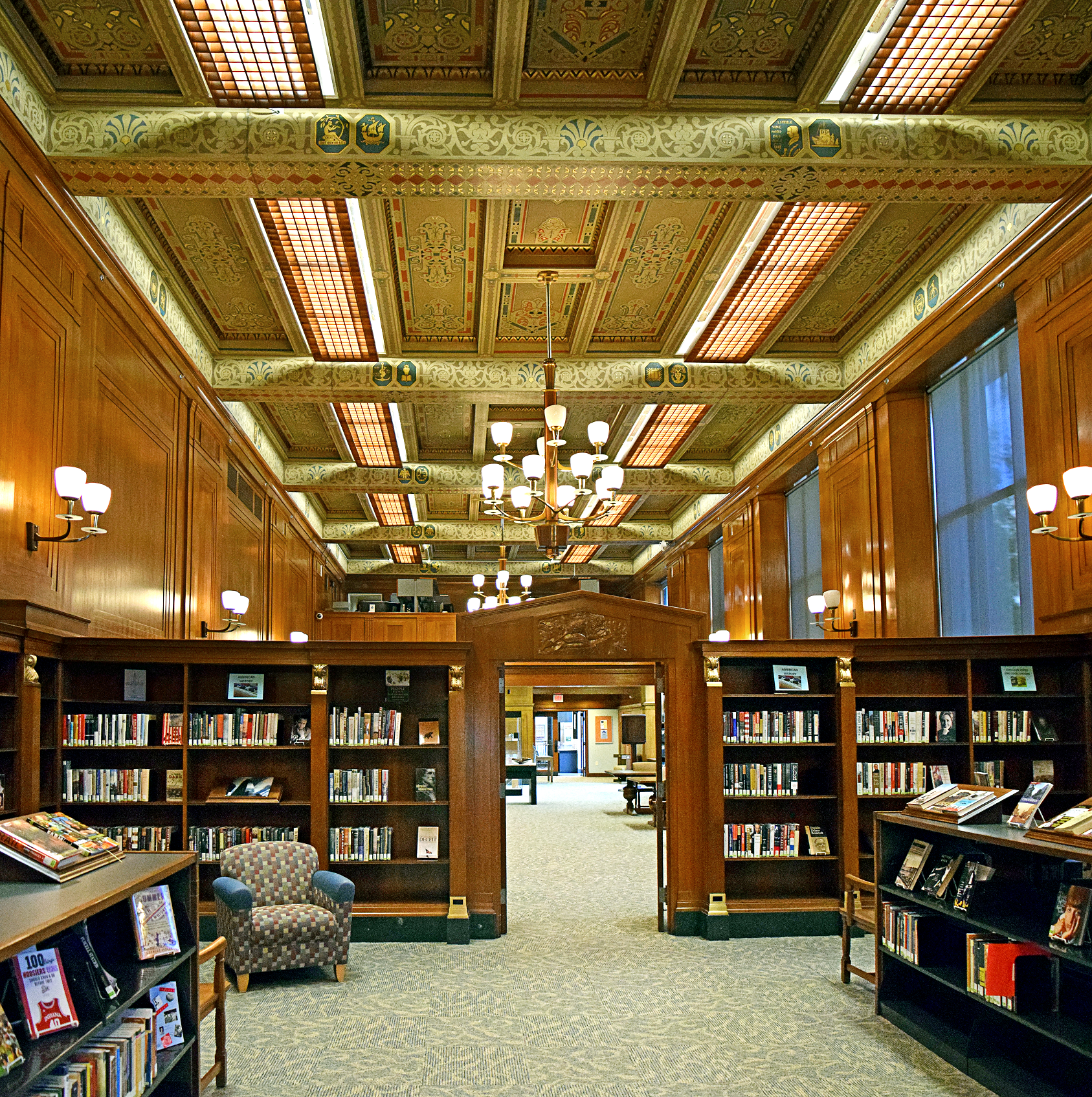 In 1976, a $4,985,072 addition was built and in 2000 this part of the building was renovated to accommodate modern technology. The main public entrance was changed to Ohio St. 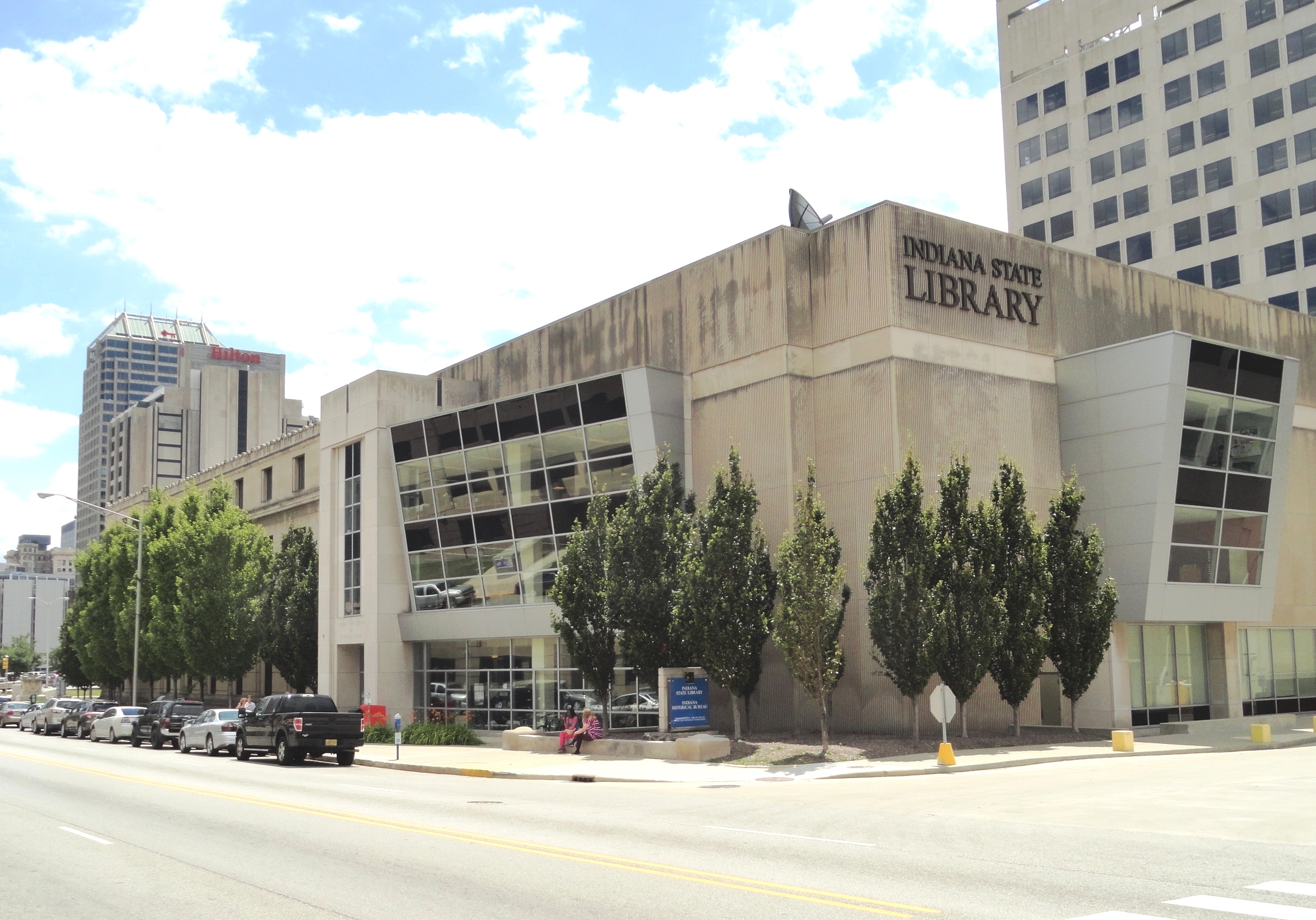 To meet the educational needs of young Hoosiers, the library added a Statehouse Education Center and an Indiana Young Readers Center as bicentennial projects. 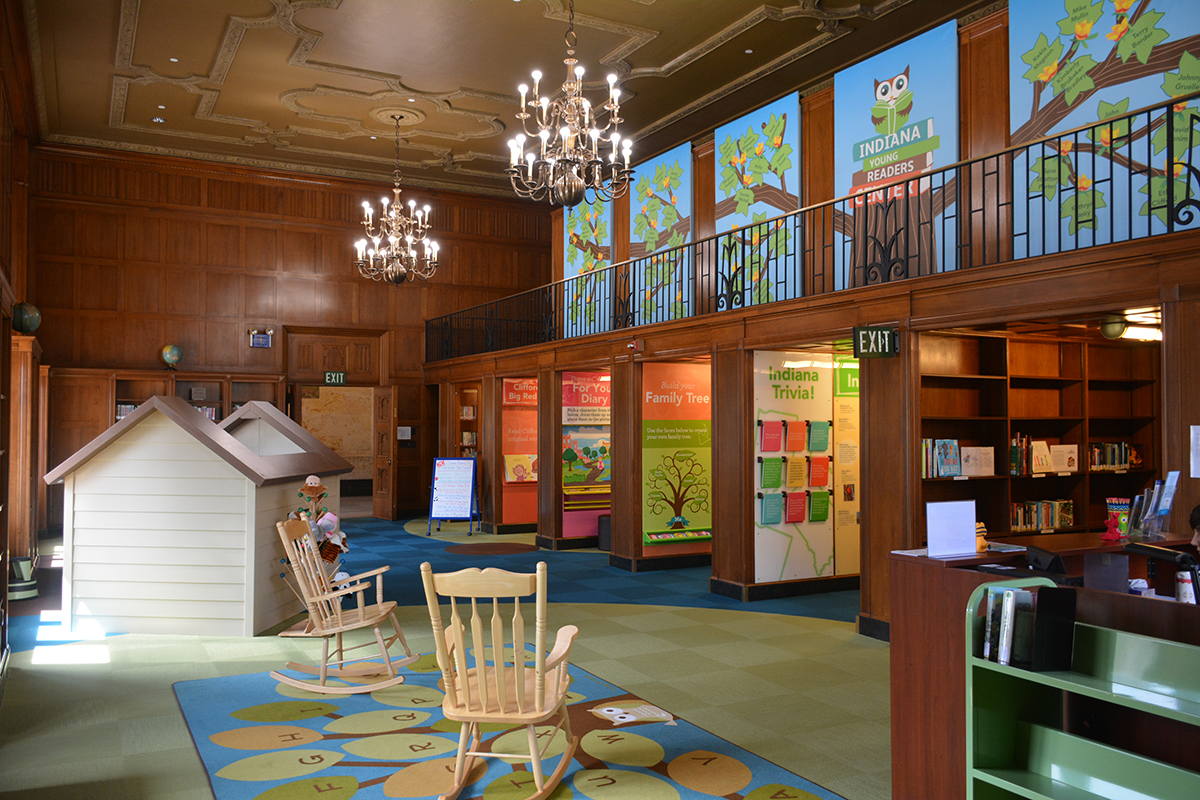 So, plan a tour of the Indiana State Library, have your picture taken next to Garfield and maybe your tour guide will show you the normally-closed 18-foot wooden pocket doors! 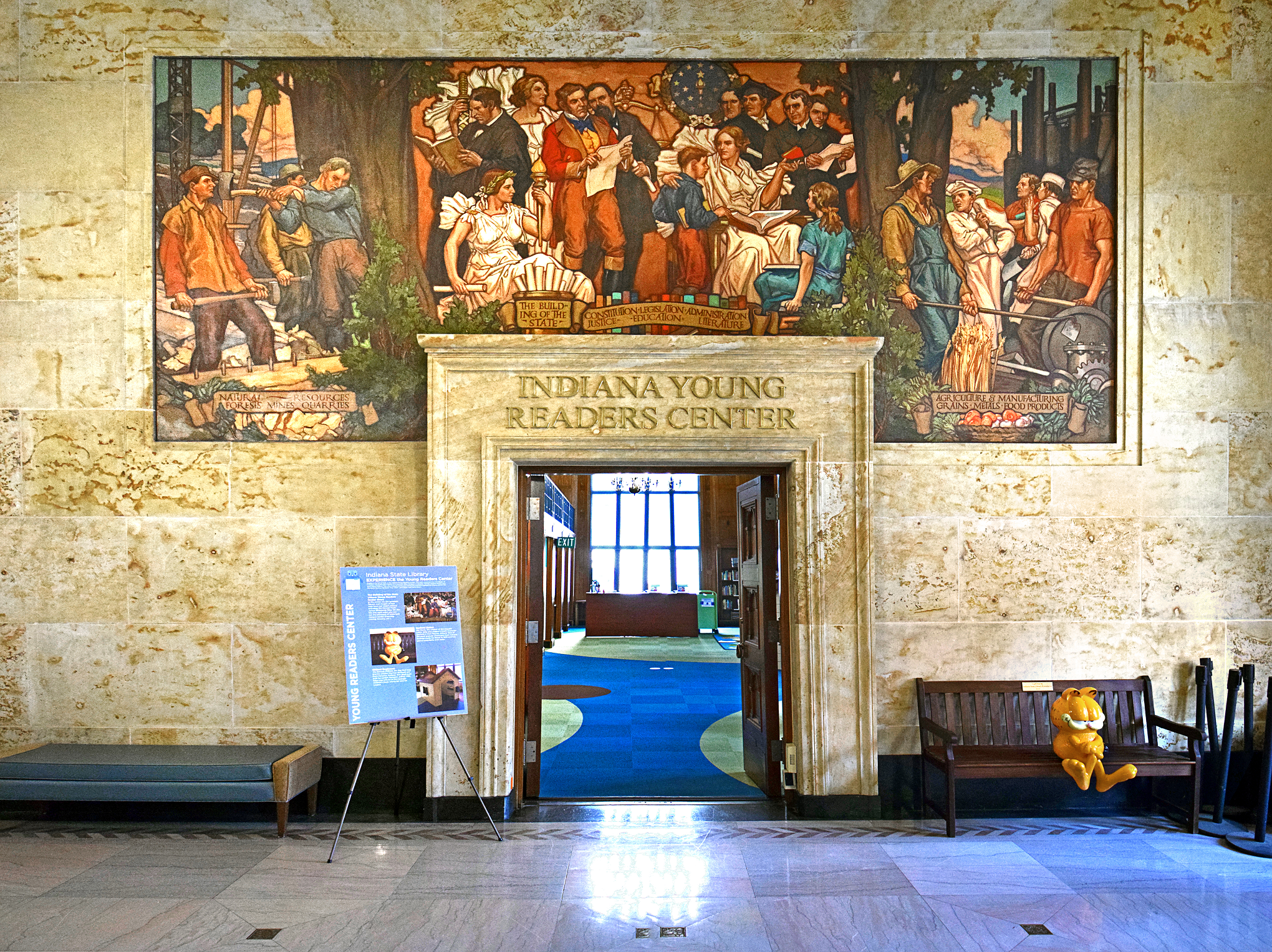 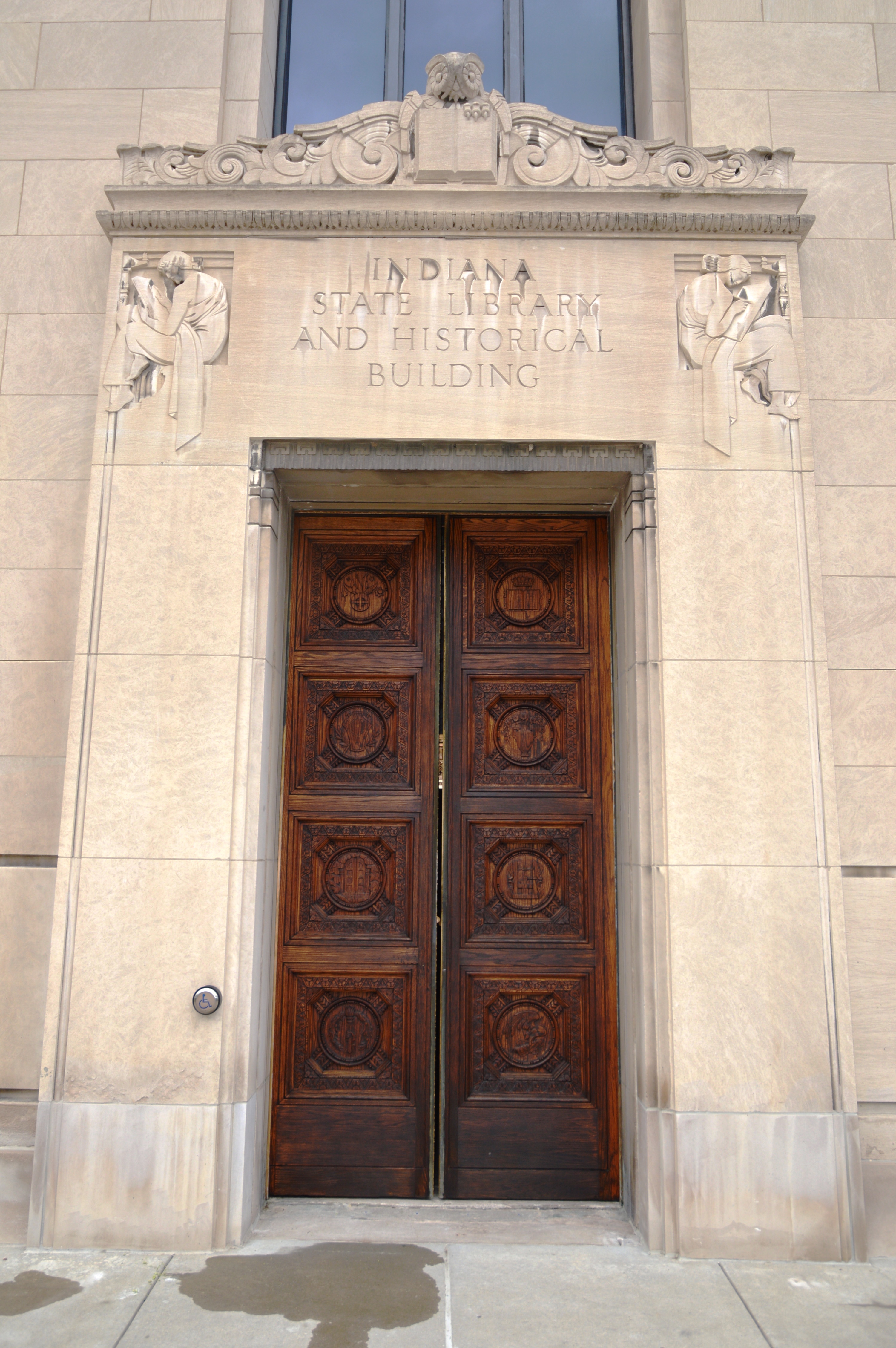 Both the building and the collections of the Indiana State Library are well worth seeing. To arrange for your class, organization, department or group to tour the Indiana State Library, please call the library at 317-232-3675 or 1-866-683-0008. Tours may take place Monday – Friday, 8 a.m. to 4:30 p.m. and must be arranged at least two weeks in advance.

3 thoughts on “Take a tour of the Indiana State Library”