In July and August, Marissa Bartz, the Indiana State Library’s 2021 graduate conservation intern, worked on a panoramic photograph from the Rare Books and Manuscripts division which had become adhered to glass in multiple locations. It’s common for photographic prints to become stuck to the glass they have been framed in over time when exposed to water, which is why they should be properly mounted to prevent them from touching the surface. In addition, the conditions of the framing and other factors had caused tears, cockling and staining, so the photograph was in poor shape overall.

This particular panorama captures the flooding of the White River in March 1913. Often referred to as “The Great Flood,” this event displaced thousands, with an estimated 7,000 Indianapolis residents and around 200,000 Hoosiers altogether losing their homes. The peak of the White River flooding was estimated at over 30 feet above the flood line.

Commonly called a “cirkut” photo, this shot was taken by North H. Losey, located at 539 N. Meridian St. It is a particularly large example, over 62 inches wide, so it was no small challenge for Marissa!

It was discovered that the photograph was also adhered to the corrugated cardboard that was used as backing in the frame, causing additional problems. Marissa began by removing the backing mechanically with a spatula and scalpel. 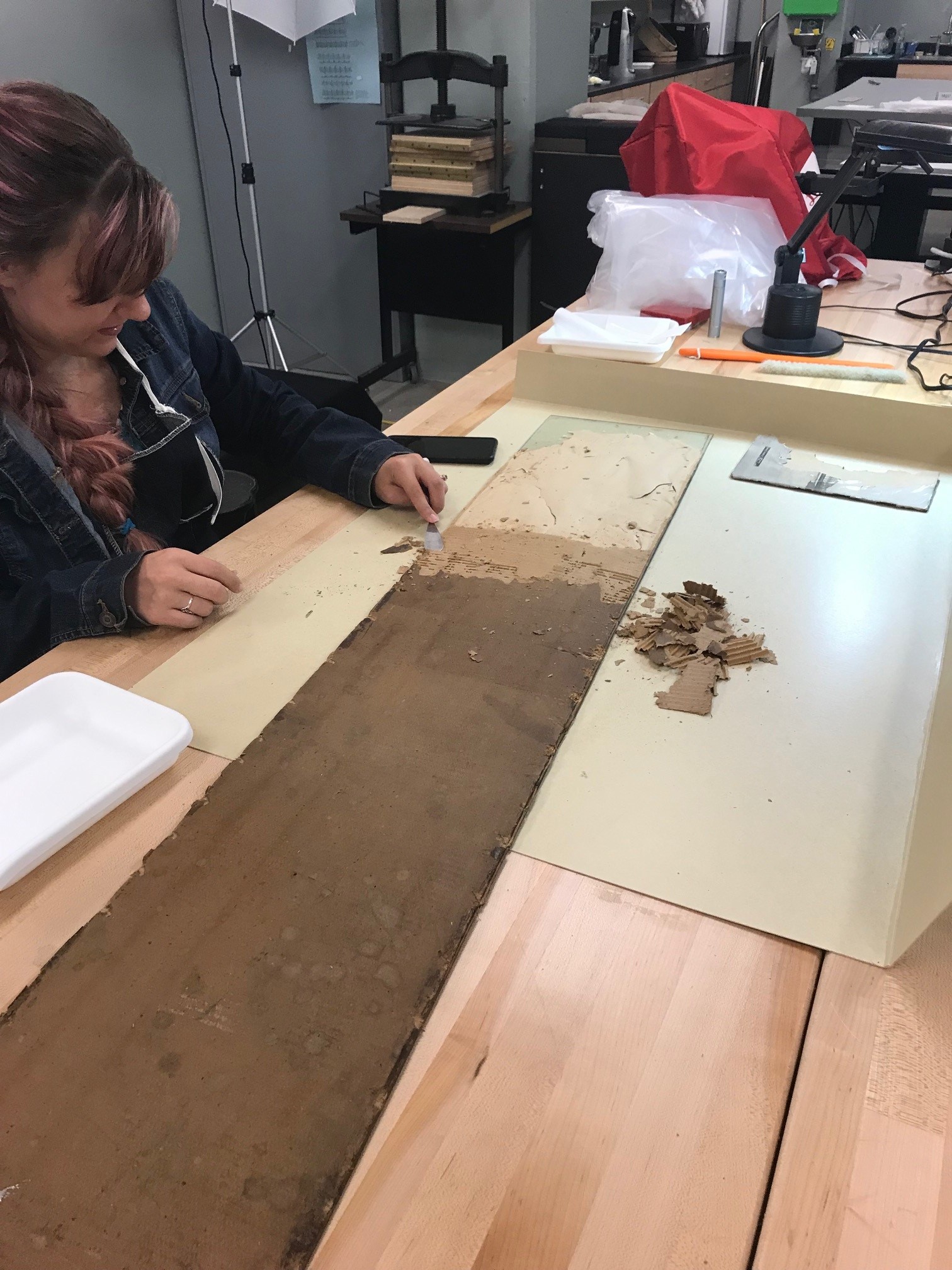 After this, areas that were stuck to the glass were be humidified from the back to soften and swell the gelatin emulsion. A piece of mylar was inserted between the glass and the photograph to gently release the emulsion from the surface of the glass. 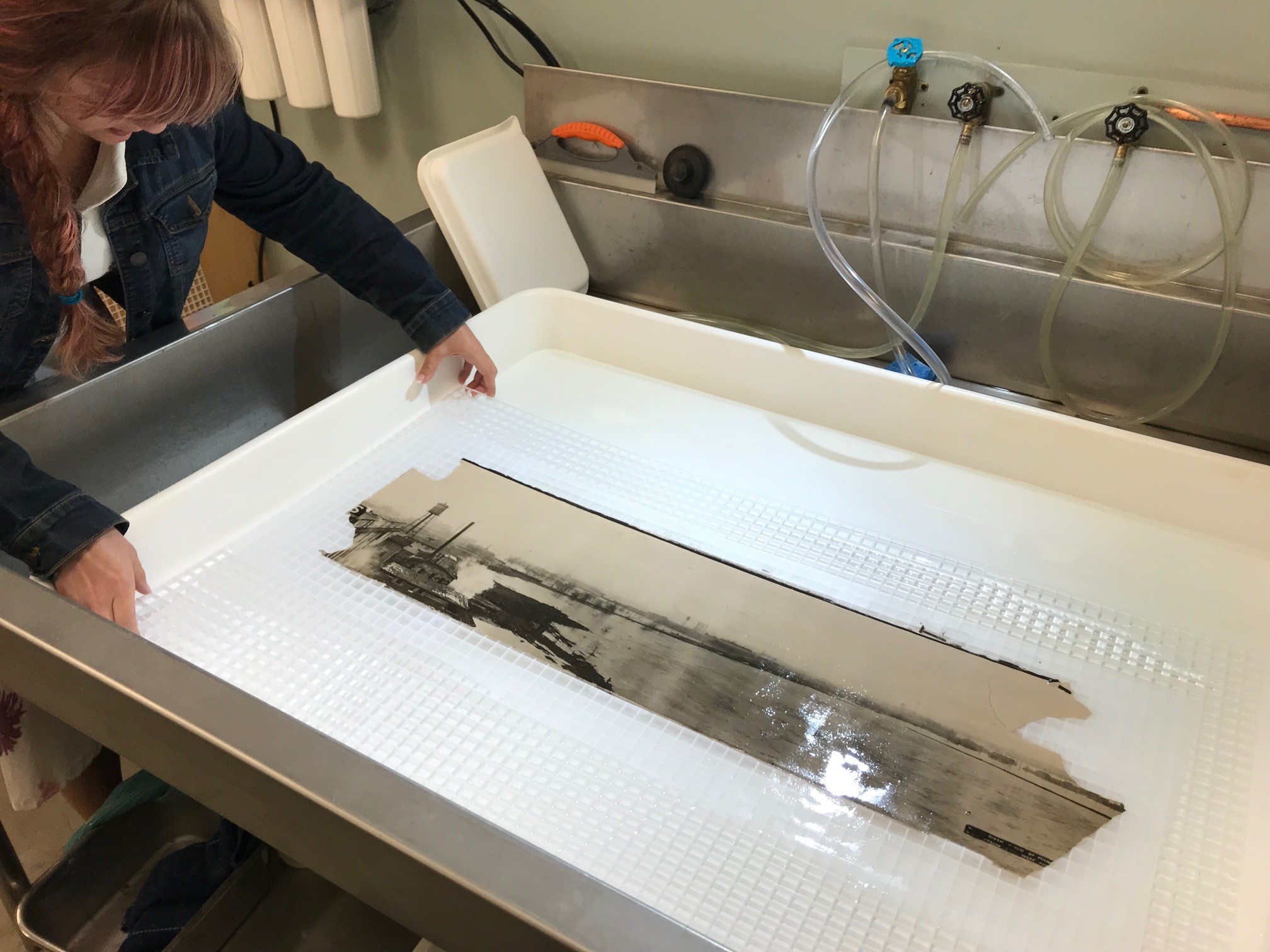 A solution of methylcellulose was applied to the emulsion and left to dry. Then a flat blade was used to carefully scrape the emulsion film off the glass and re-adhere it back to the photograph.

Tears were then repaired with wheat starch paste and Japanese tissue. Areas of loss, particularly in tears, were consolidated using warm gelatin. 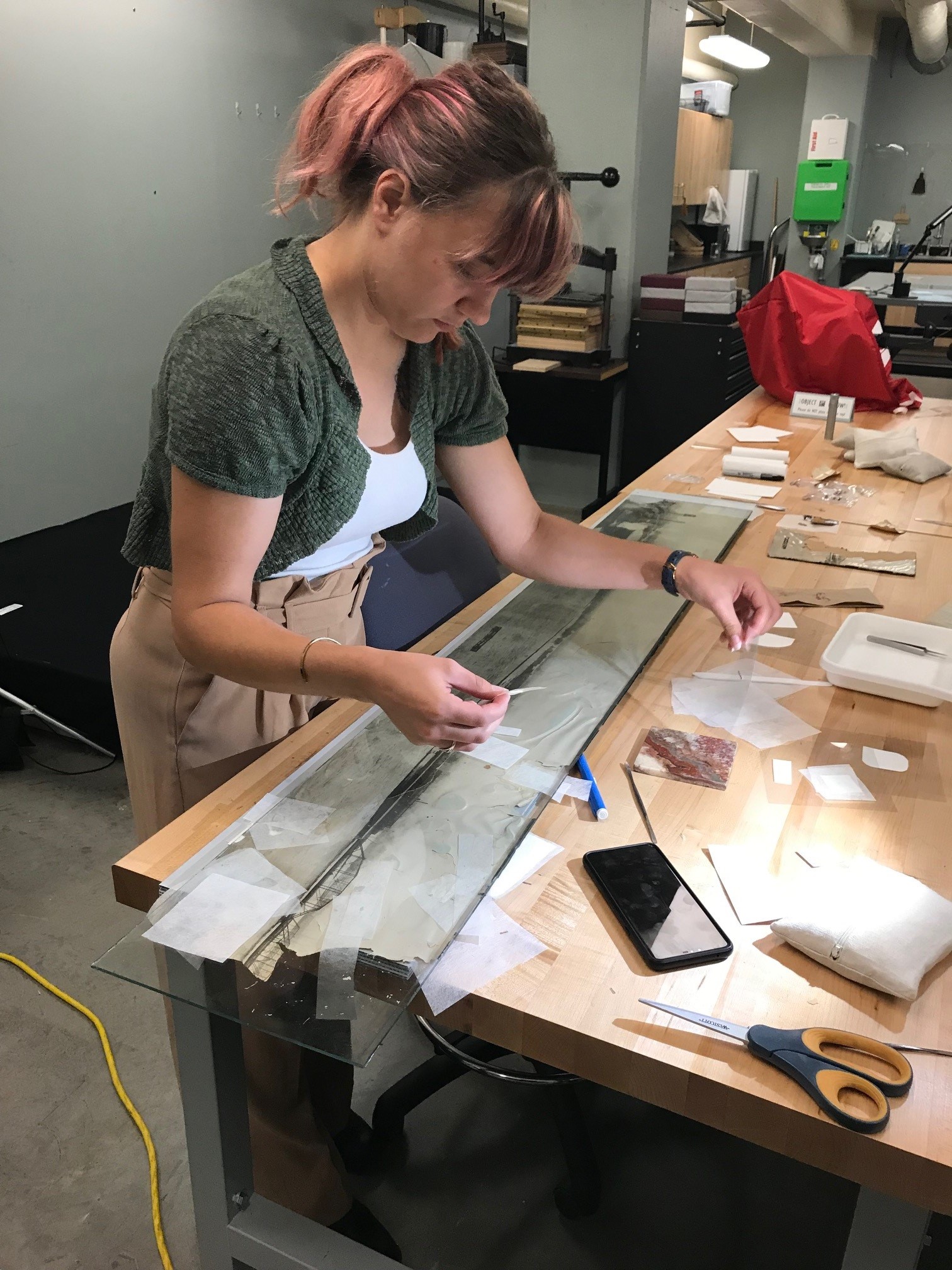 Conservation intern Marissa Bartz removing the photo from the glass 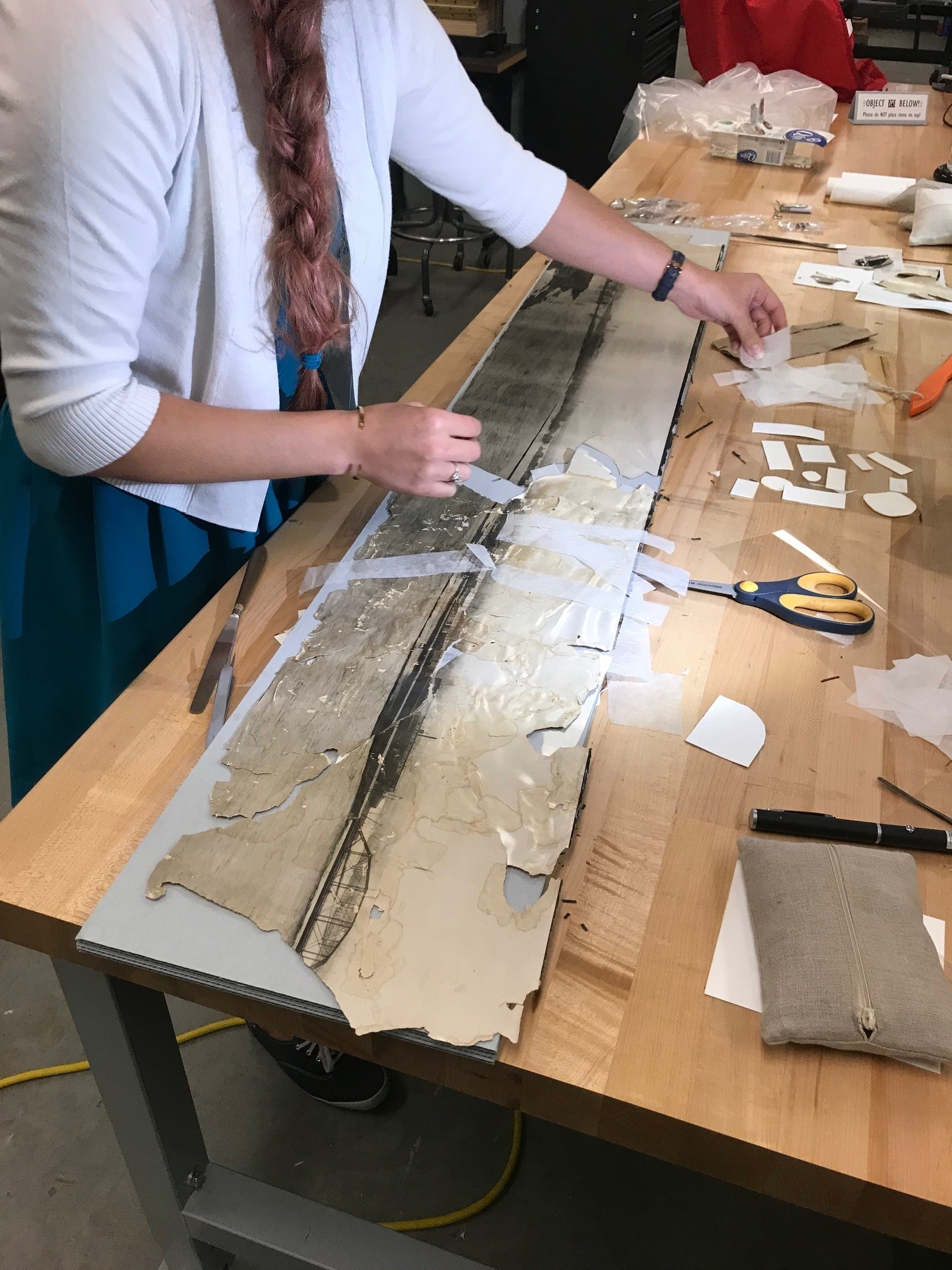 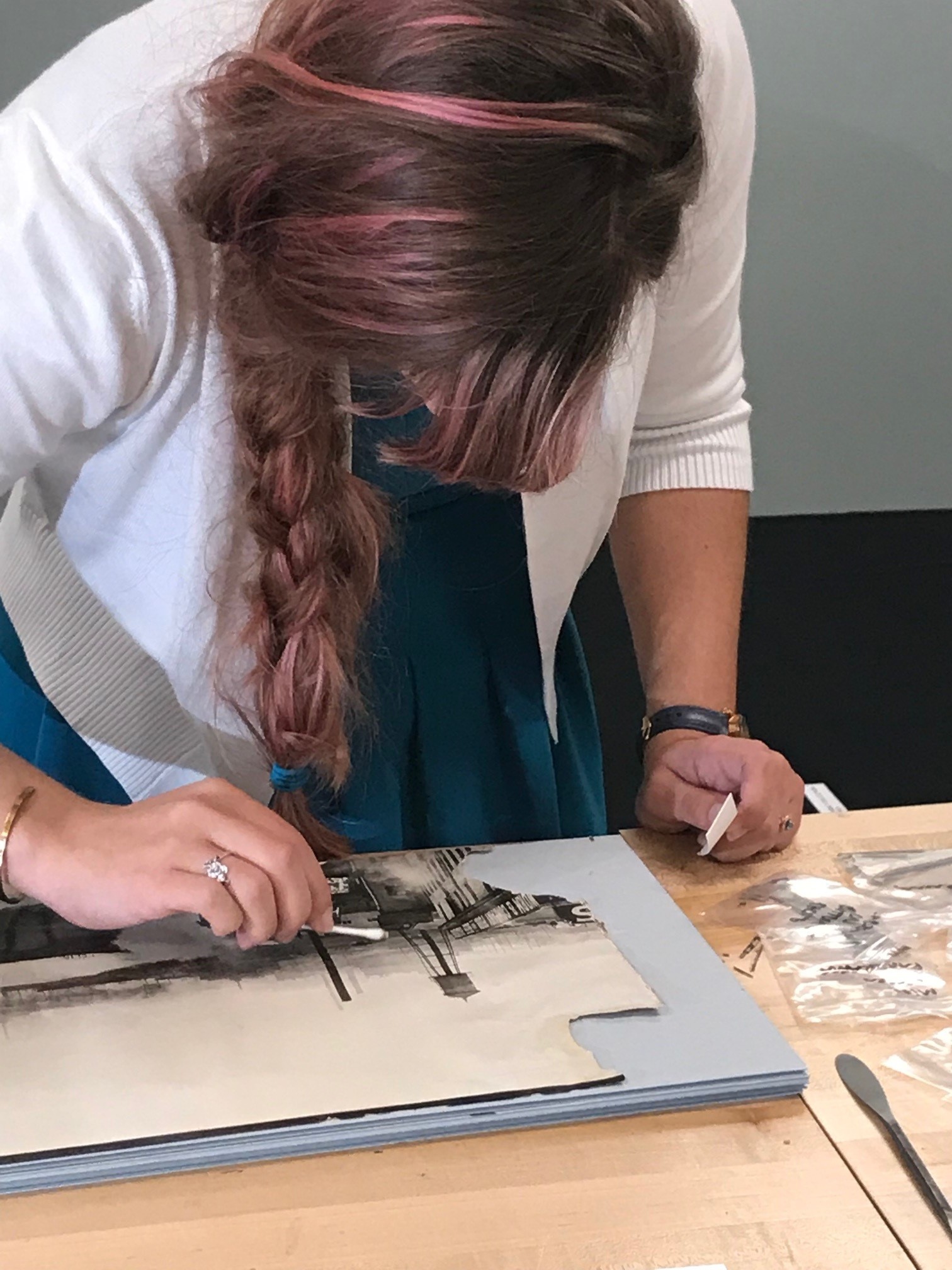 In-painting with watercolors was also done in areas of loss.