On Oct. 2, the Indiana State Library hosted a resource sharing update for the Indiana library community. The two-hour webinar detailed the latest resource sharing information in the state. This took the place of the annual Discovery to Delivery conference which is normally held in-person each year. This abbreviated virtual conference featured sessions from State Library staff and vendors, and was attended by public, academic, school and institutional library staff. State Librarian Jacob Speer and Nick Schenkel, director of the West Lafayette Public Library, kicked off the conference by welcoming attendees.

EBSCO – Rick Rybak, Academic Regional Sales Manager, EBSCO
As of July 1, the INSPIRE virtual library has been updated to feature EBSCO databases, including an upgrade to Academic Search Complete. Rick explained some of the newer additions to EBSCO’s offerings, including eBooks and LearningExpress.

Teaching Books – Nick Glass, Founder and Executive Director
Nick introduced the group to the resources available through TeachingBooks, which is also part of INSPIRE. While TeachingBooks’ primary audience is educators and caregivers, Nick introduced the new Book Connections interface, which is intended for every reader. Resources on these sites include background information on books and authors, including complete audio and video book readings.

InfoExpress – Nicole Brock, Indiana State Library Resource Sharing Coordinator and NOW Courier Staff
Nicole gave an update on the courier service beginning with the shutdown in March to the gradual reopening this summer. Nicole passed along some best practices related to shipping. NOW Courier staff shared some insight on how their mission is aligned with the Indiana State Library’s and gave a preview of some upcoming developments, including an upgrade to a new platform which will reduce unnecessary stops. 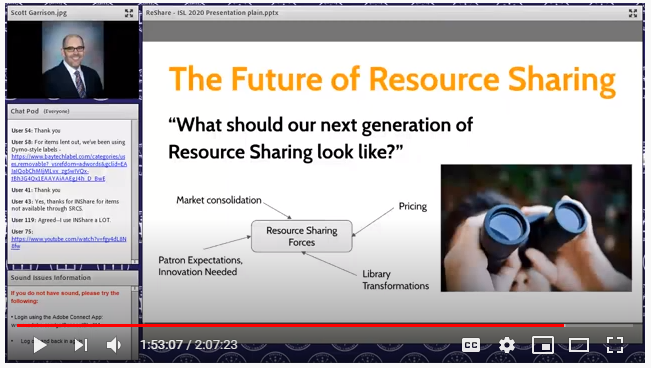 Project ReShare – Scott Garrison, Executive Director, Midwest Collaborative for Library Services
Scott capped off the morning by providing an update on Project ReShare, an exploratory service that has the potential to breakdown barriers between consortia and systems, putting the patron in the center and increasing access to library materials.

The recording of the workshop and presentations is posted to State Library’s Resource Sharing page.

As Indiana libraries closed their doors this spring during Gov. Holcomb’s stay-at-home order, resource sharing between libraries ground to a halt. As libraries across the state closed, the Indiana State Library made the difficult decision to suspend interlibrary loan delivery service. In fact, no delivery service was provided by the statewide courier during April and for most of May.

As public libraries began reopening their doors as early as May 4 – when allowed per the governor’s Back on Track Indiana plan – delivery service resumed shortly after on May 11. With academic libraries reopening later this summer, nearly 90% of our libraries are now back on InfoExpress and sharing books via Evergreen Indiana and our numerous resource sharing services.

During the shutdown, books in transit were safely held either at the borrowing libraries or at NOW Courier’s statewide hubs. Most materials have since been returned to their home libraries, but the company’s staff is still working to sort through a backlog of parcels, while working to accommodate libraries’ shifting schedules and reduced hours. 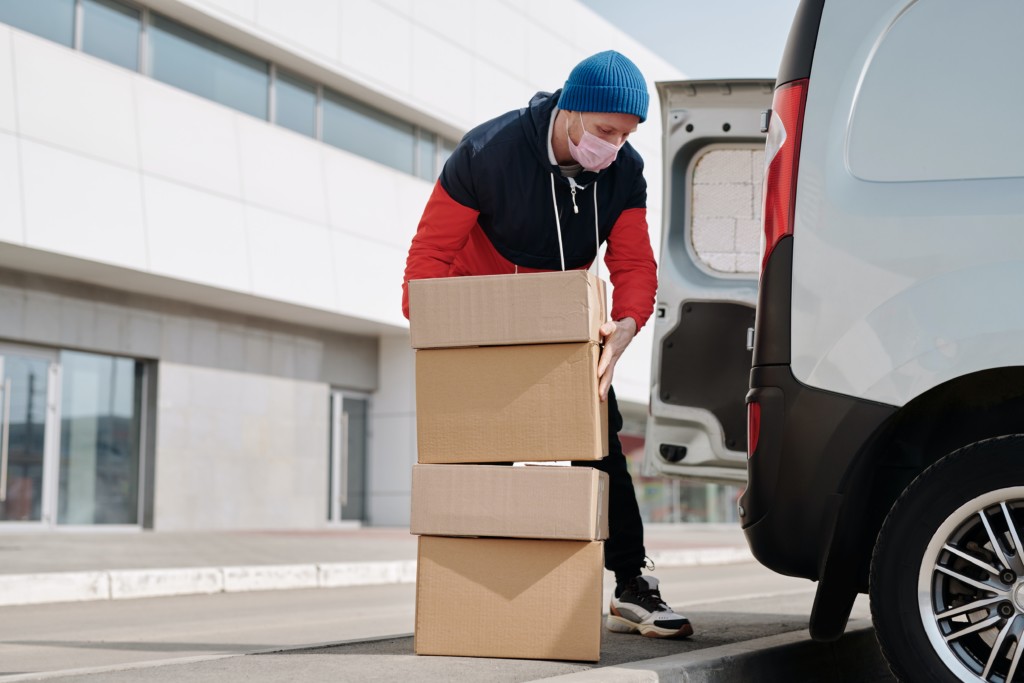 In response to the virus, and following industry best practices, NOW Courier has implemented safety measures for handling and delivering materials including wearing face masks and gloves and limiting contact with library staff. Additionally, safety precautions are being taken at libraries such as hand washing and quarantining of shipped materials and books. While some research suggests the COVID-19 virus cannot survive on most print materials for more than 24 hours, many libraries are opting to quarantine items for 72 hours or longer. Liquids and other disinfecting methods like heat and UV light are not recommended as they may damage materials. Fortunately, the Centers for Disease Control and Prevention shared in a March 30 webinar for library staff that they do not believe library materials are a transmission route for COVID-19. 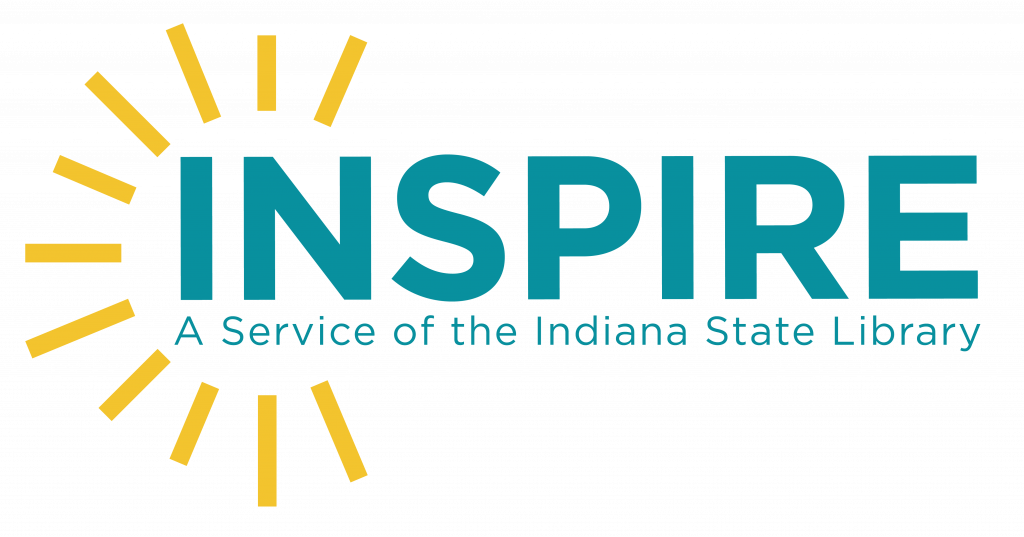 Now that most libraries are back to sharing, we encourage Hoosiers to take advantage of the resource sharing options offered by their library. If your library doesn’t have a book you need, ask circulation staff if it is available electronically or via interlibrary loan. Finally, all Hoosiers have access to INSPIRE.IN.gov, a free online library that includes research materials, news publications, eBooks, and K-12 resources.

A fall resource sharing update for Indiana library staff is scheduled for Oct. 2. Additional information and a link to registration can be found here.

The day kicked off with a welcome from State Librarian Jacob Speer. OCLC’s Tony Melvin then provided a list of the ten most-requested interlibrary loan titles in the U.S. and Indiana, as well as updates about changes to OCLC’s lending platforms including FirstSearch, WorldShare ILL and Tipasa, the replacement for ILLiad. Matt Straub, director of business development at NOW Courier, gave attendees an inside look at operations at the company that provides InfoExpress book delivery service. The morning wrapped up with a presentation from Debbie Hensler from Auto-Graphics, the company that provides SHAREit, which is the SRCS platform. Debbie shared information about new enhancements and a peek at the new platform, V6, anticipated for release in Q3 2018.

During lunch, participants were given the option to participate in a SRCS user group discussion for either public or academic libraries, an institutional libraries discussion or they could lunch on their own.

Following lunch, participants had the option to attend one of three breakout sessions:

A second session was then held with the following choices of presentations:

Since it was difficult to choose which session to attend during each breakout, plenary discussions and reports from each session were provided after both. The presentations are also posted on the conference program page. 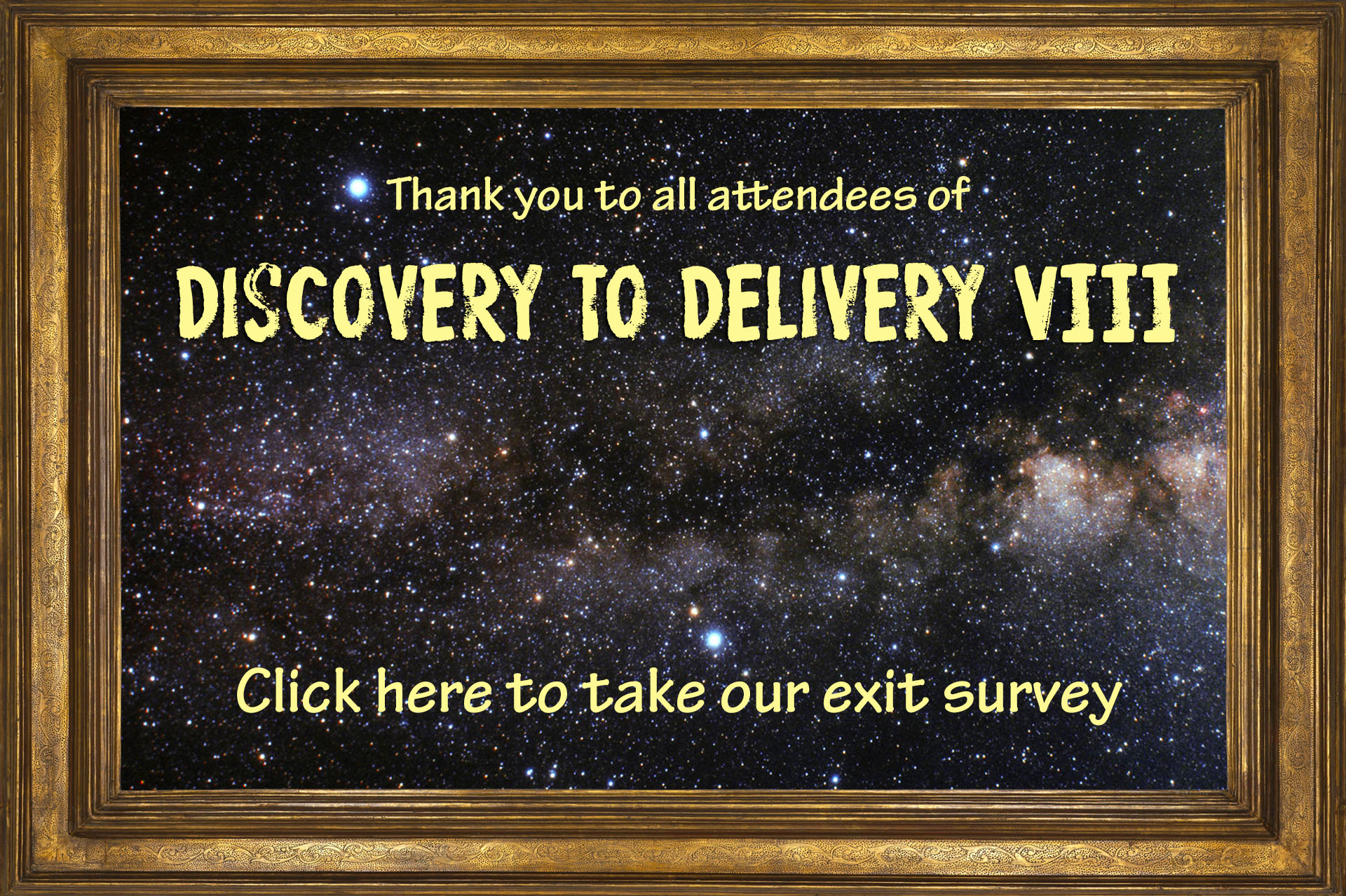 The day wrapped up with a final plenary discussion and attendees returned to their home libraries, hopefully, having a better understanding of the bigger picture of resource sharing in Indiana and of the changes on the horizon.

The Indiana State Library would like to thank the Academic Libraries of Indiana, Ivy Tech Community College, OCLC, NOW Courier, Auto-Graphics and members of the Resource Sharing Committee for their contributions to the day.

Part of the mission of the Indiana State Library (ISL) is to strengthen the services of all types of libraries by developing new services and consistently re-evaluating existing services. During the last six months, ISL has updated the rules governing two of its long standing state library services and introduced a new one, which promises to re-invent the way resource sharing is managed within the state.

Since 1997, ISL has provided a heavily subsidized courier service, InfoExpress, to a wide variety of libraries around the state. Each courier stop costs the state $625 per year, but we subsidize that service so most libraries pay only $100 a year for one-day-a-week service.

A typical year will have an average of a half million parcels moving around the state. Each of those parcels contains somewhere between one and 20 items, so the total number of books, videos, etc. that are circulating around the state each year easily exceeds five million items. One of the high points of this service is that our cost per item is a fraction of the cost of similar systems in other states.

On Jan. 1, 2017, new public library standards went into place. These standards changed the way that the minimum number of service days is computed. This means that in July, when you renew your subscription to InfoExpress, all libraries will be required to subscribe to one-day-a-week of service for every 2,000 parcels shipped out. Thirty years ago one of my first library jobs was processing interlibrary loan requests for libraries that couldn’t afford to subscribe to the new OCLC ILL system. This state-library funded service still exists today under the name of IN-SHARE. In the years since that service was launched, very little has changed about the way we manage that system. It currently costs the state library approximately $25 for each and every request submitted. Since we had no limits on the membership or the number of requests they could place, this amounted to basically asking the state library for a blank check each year to provide a very expensive service to a small number of libraries.

At the recommendation of the Resource Sharing Committee, IN-SHARE is adopting some new rules and guidelines starting this July. These guidelines will offer most libraries a set number of free requests each year, with a preference for the service going to the smaller libraries who normally would not be able to offer interlibrary loan service to their patrons. Any IN-SHARE requests that exceed that threshold will be billed at $5 for each additional request, far below what it costs the state library to process. These bills will be sent out quarterly and only apply to IN-SHARE requests that exceed each library’s threshold. The third part of this resource sharing triad is Indiana’s new Statewide Remote Circulation System (SRCS). This is a new way for streamlining interlibrary lending requests between Indiana libraries. Instead of having to pay a staff member to search for, and request, each title, authorized patrons can place their own requests. Patrons search a statewide union catalog combining the holdings of nearly 200 Indiana libraries and identify the item that they want. If one of these libraries has a copy of that item currently available, and it is in a loan-able location and format, then the patron sees a Request This Item button. A SRCS request is still an interlibrary loan, but it cuts across the differences between the many different ILS in use by Indiana libraries and streamlines the requesting and processing steps.

One of the drivers for the IN-SHARE changes has been the advent of SRCS. It has been estimated that approximately 75 percent of the items currently being requested through IN-SHARE could be filled faster and cheaper using SRCS. By combining SRCS and IN-SHARE, most libraries will be able to expand service to their patrons, while reducing their dependence on IN-SHARE. People often ask, “Does this mean IN-SHARE is going away?” The answer is “no.”  By reducing the demand, and the cost, for IN-SHARE, the ISL plans to use the savings to underwrite the setup any annual connection fees for participating in SRCS. IN-SHARE will, of course, continue to provide the items that SRCS can’t provide, such as photocopies and out-of-state materials.

This blog post is by Steven J. Schmidt, Library Development Office supervisor. For more information, contact Steven at (317) 232-3715 or send an email to StatewideService@library.in.gov.