The Indiana State Library has been digitizing a set of historic lake maps and making them available online for free to use and download. This set of maps was created between 1922-1925, making them all around 100 years old. Have a lake house? These might make nice pieces to frame!

There were 37 lakes mapped by the Indiana Department of Conservation, Division of Fish and Game in the first half of the 1920s. The maps show lake depth, adjacent topography, cottages, access roads and vegetation. The detailed surveys were the result of labor by William Motier Tucker, a native of Ripley County and Professor of Geology at Indiana University. He always worked with a student assistant, conducting the surveys in the summer months. The maps were then available for sale from the Department of Conservation for 50 cents each. They were purchased by interested fishermen and cottage owners. 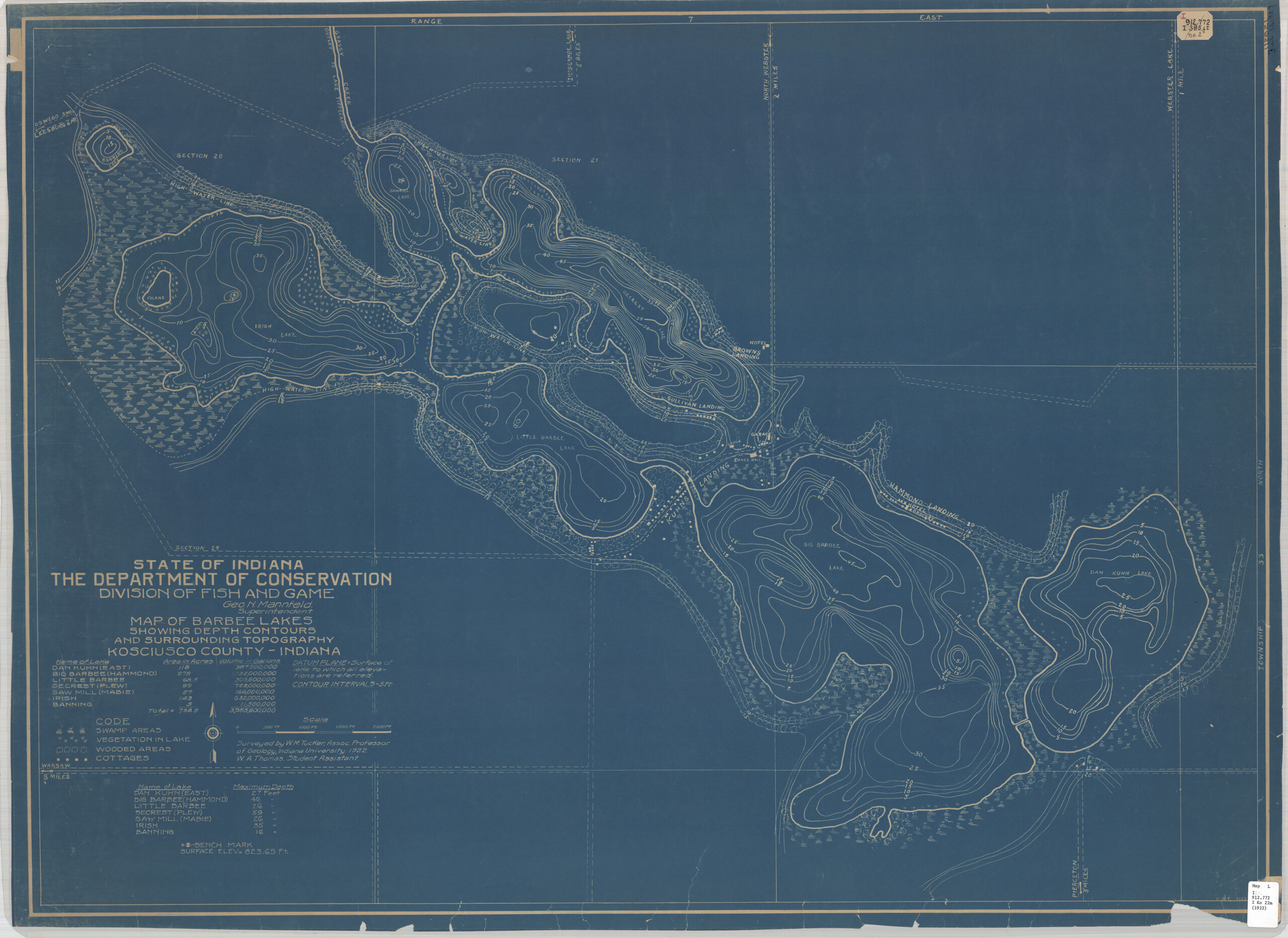 There was much interest in Indiana’s lakes in the 1920s, mostly relating to fishing and fish hatcheries. Indiana had six state owned fish-hatcheries on lakes by 1926. They were responding to requests for stocking fish for sport and food. A lot of effort went into artificially propagating fish. You can read about these efforts in the Division of Fish and Game annual reports available online through the digitized yearbooks. In 1925, the Division sold over 205,000 fishing licenses, which contributed to the Division being self-sufficient. They receive no regular appropriation from the legislature. Today, 29% of Fish and Wildlife funding comes from license funds (source, pie chart).

In addition to being interesting to fishermen, the lake maps were to serve as a reference for years to come as they show the permanent benchmark levels for the lakes. There was concern that land drainage projects were threatening to lower lake levels in the northern half of the state. The Department of Natural Resources makes modern lake depth maps available on their website. So, while these 100-year-old maps may not have much practical use and are superseded by newer maps, they remain quite interesting. My favorite details are the manmade surroundings shown on the maps – there are cottages represented, some hotels and access roads are named. Many of Indiana’s beautiful lakes are remote, located way off state and interstate highways. Many no longer have many, if any, lots open for new development, making lakefront living a special privilege. I hope you find something interesting, too!

Bonus interesting information: William M. Tucker, the Indiana University professor who created the maps, left Indiana for a position at Fresno State College in the late 1920s. In 1937, he discovered the vertebra of huge prehistoric sea lizard, 50-million-years old. A few months later, the skull was found, making it one of the most valuable fossils discovered in the area.