This fall, the Rare Book and Manuscripts Division of the Indiana State Library accessioned additions to the Albert J. Beveridge collection. Compiled by his second wife, Catherine Eddy Beveridge (1881-1970), and including instances of her notes, it comprises correspondence, manuscripts, publications and artifacts. These items supplement the existing correspondence, speeches and one portrait, as seen below. 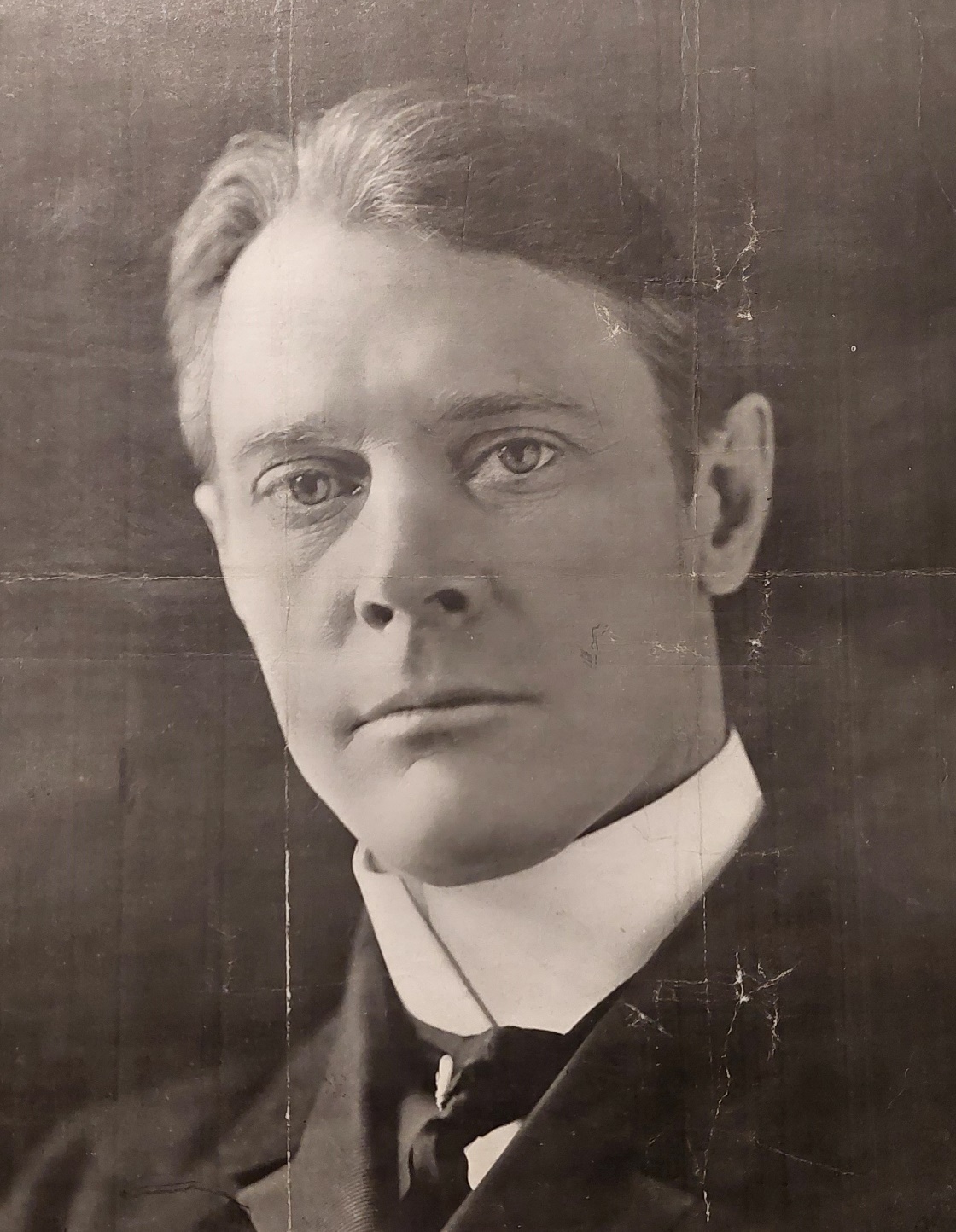 Albert Jeremiah Beveridge was born on Oct. 6, 1862 near Sugar Tree Ridge, Ohio. In 1885, he graduated from Indiana Asbury College (DePauw University). In 1887,  Beveridge married Katherine Langsdale, was admitted to the Indiana bar and began practicing law in Indianapolis. Beveridge married Catherine Eddy in 1907, seven years after the death of his first wife. In 1899, Beveridge was elected to the U.S. Senate as a Republican and served six terms as a senator, during which time he was known for, among other things, fighting for child labor legislation. 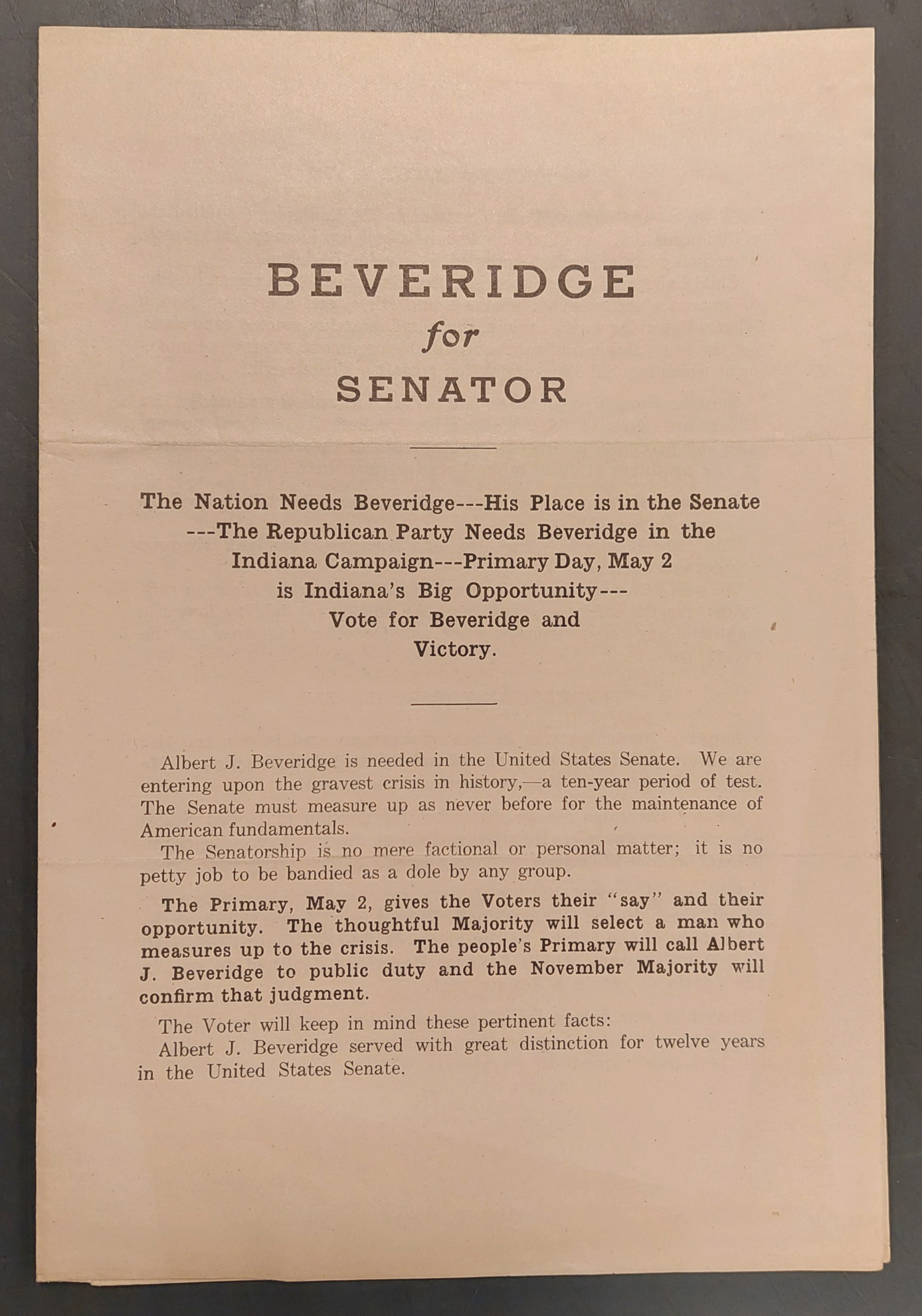 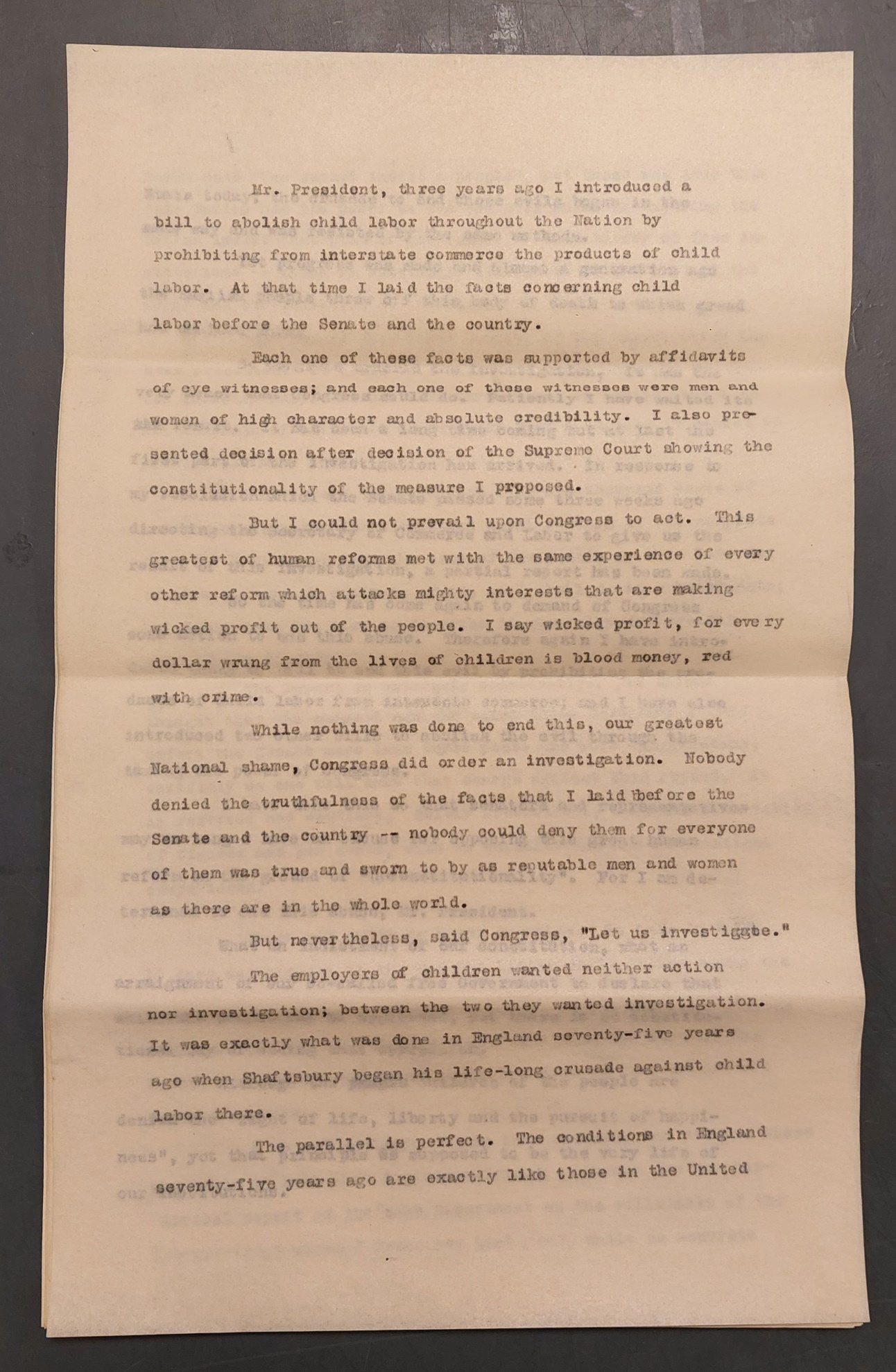 In 1911, he returned to Indianapolis, starting a new career as a biographer and penning works on the lives of John Marshall and Abraham Lincoln after an unsuccessful bid for the Indiana governorship as a Progressive candidate in 1912. In the same year, he was the chairman of the National Progressive Convention at Chicago. He died on April 27, 1927 in Indianapolis. 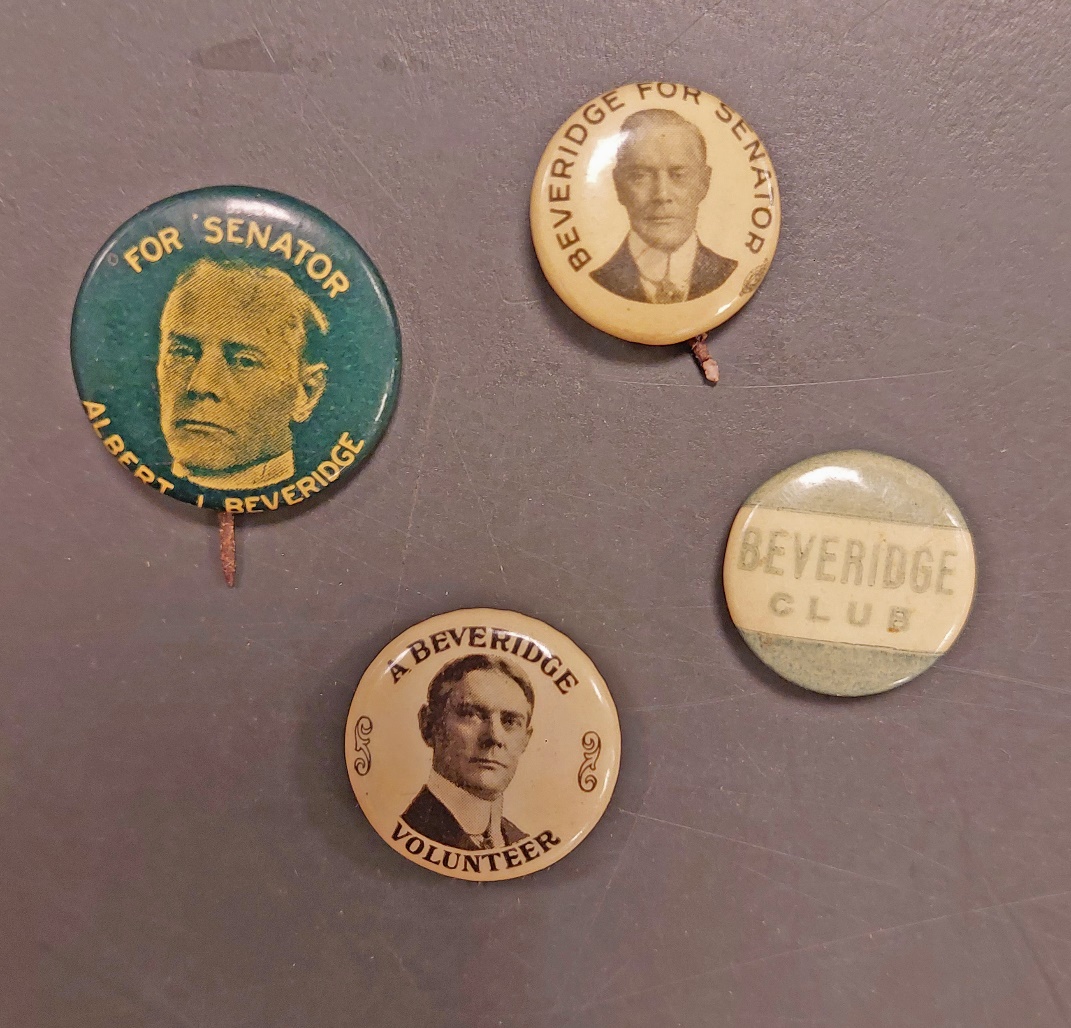 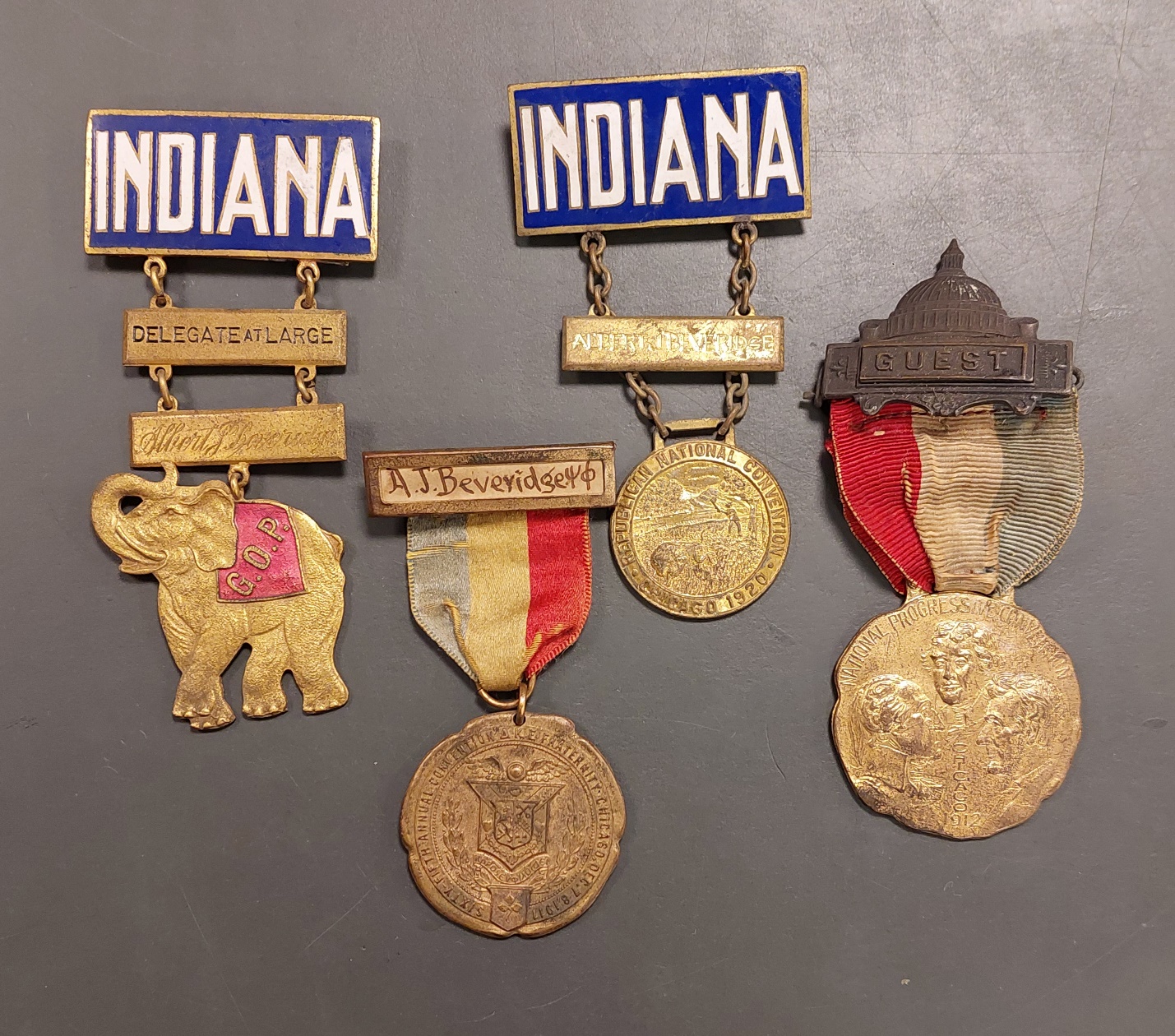 Highlights of the recent acquisitions include a photograph of Beveridge with President Theodore Roosevelt, his wedding invitation and political badges.