Diverse ethnicities were represented in St. Joseph County, Indiana near the turn of the 20th century. According to “Indiana Newspaper Bibliography,” by John W. Miller, there were several Hungarian newspapers, among other ethnic-language papers, published in South Bend in the first quarter to half of the century. I wondered why and how there came to be a prominent Hungarian community in South Bend.

According to “Peopling Indiana: the Ethnic Experience,” edited by Robert M. Taylor, Jr. and Taylor McBirney (ISLI 305.8 P419i), the Studebaker Wagon Company and the Oliver Plow Plant in South Bend needed laborers. In 1882, they welcomed 32 citizens from a Hungarian Village, Hegykő, to South Bend to work in the factories. Churches and other community groups helped to host the newest South Bend citizens. Another wave of Hungarian migration came in the early 1900s, and toward the end of World War I, a group of professional and highly-trained Hungarian workers immigrated to South Bend and the Calumet Region. Apparently, the professional group did not mix well with the group of laborers. The laborers for the most part lived in boarding houses, where the close quarters caused disagreements and drama. There was even a radio show broadcast from South Bend called the “Sunday Hungarian Family Hour,” which fictionalized life in the boardinghouses for entertainment. Although the Hungarian-Americans tried to spotlight their ethnic identity with festivals and costume displays, they remained a largely close-knit group. In fact, their neighborhood area was nicknamed “Little Budapest” where there were Catholic churches that conducted masses in Hungarian, among other social organizations.

According to the Miller book, no library or institution in Indiana has holdings of Igazság, translated as Truth in English, a politically-independent Hungarian newspaper which ran from about 1906-10. Another Hungarian newspaper was called simply, The News, which ran for a short, unknown time period. Es Videke, or I’m in the Middle, was published from 1925-26, although the State Library does not have holdings. Yet another, Magyar Tudosito, or Hungarian Bulletin, was published from 1911-19, and concentrated on helping to Americanize the Hungarian immigrants. Miller’s book does not indicate any Indiana holdings for Magyar Tudosito.

Városi Élet, translated to City Life, is the Hungarian newspaper for which we have the longest run on microfilm, from January 1934 to January 1953. From the description in our Evergreen catalog, in which it was listed as a Hungarian/English newspaper, I had hoped that the Városi Élet might have side-by-side Hungarian and English articles. I assumed that the purpose of having such a newspaper would be to assist adjustments in relocating to the United States. Instead, I found that the few English words that did appear in the Városi Élet newspaper were in advertisements and comic strips. 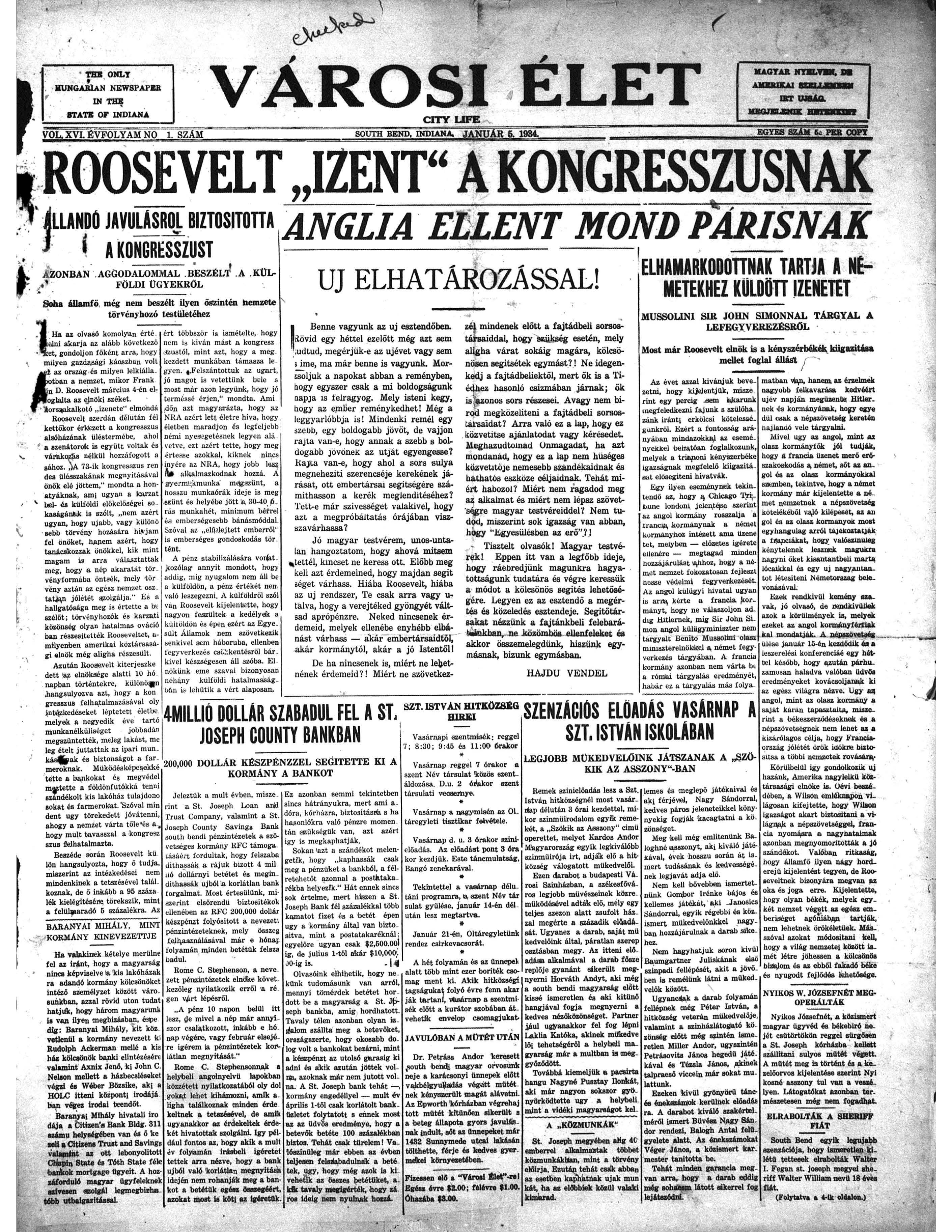 Here is a page from the same newspaper in 1953. There were very few format changes over the years: 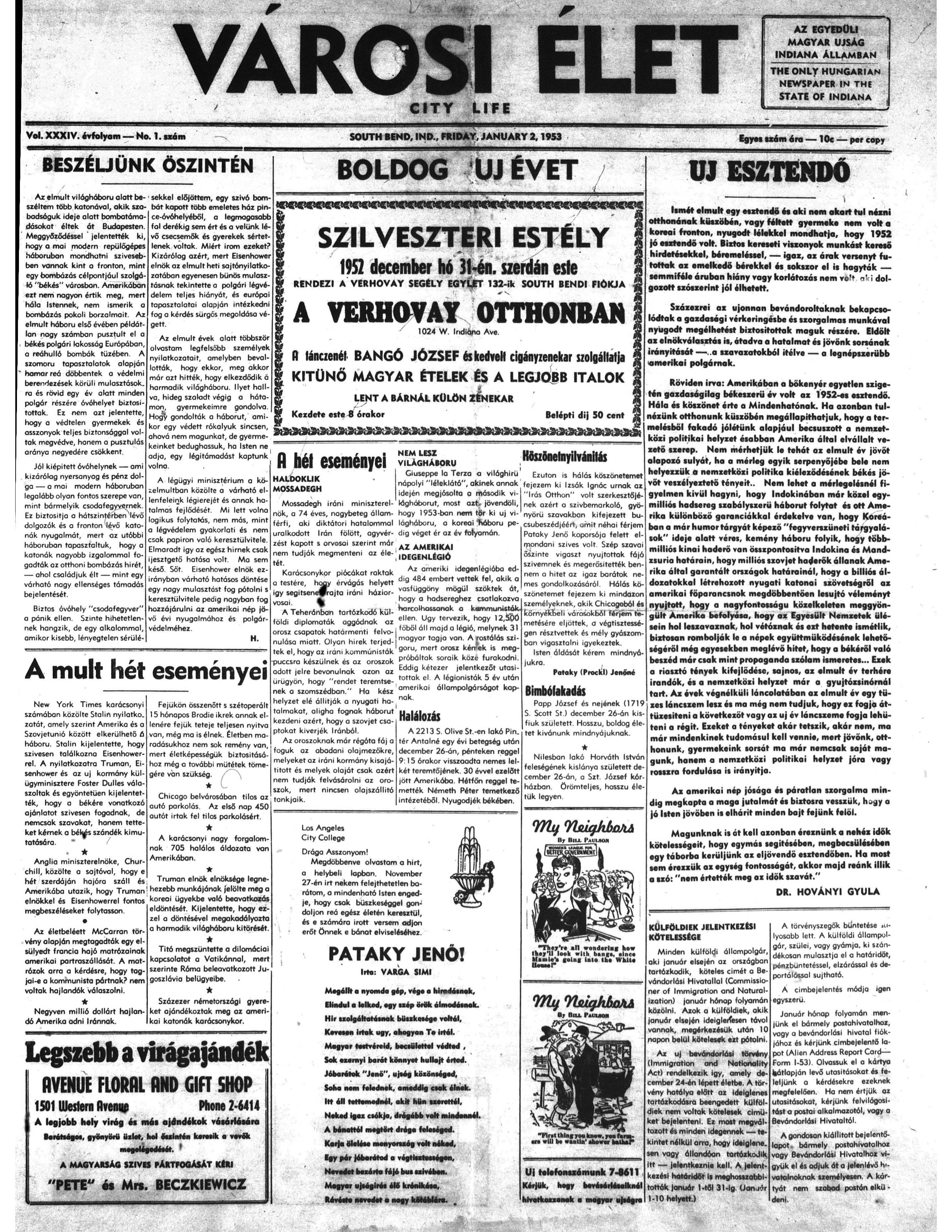 This newspaper ceased publication before the next major migration of Hungarians to St. Joseph County, which was after the Hungarian uprising in 1956. At that time, around 300 Hungarians immigrated to the area.

South Bend, and St. Joseph County in general, still has a substantial number of its population with Hungarian heritage, as well as those with Polish, German, English and Irish heritage. This county in Indiana is rich with ethnic history and traditions. For more information on the Hungarian migration to Indiana, see “Hungarian-Americans in St. Joseph County, Indiana: Implications of Ethnicity for Social Policy” by Wim Wiewel (ISLM F 532 .S2 W548 1979).

The Indiana State Library is always looking for newspapers that we are missing in our collection. If you find any of the above newspapers listed in the Miller book in Hungarian, we would love to receive your donations, either temporary – while microfilming – or permanent, to add to our collection.