In 1887, John H. B. Nowland wrote a special inscription to Emily Stewart Cravens in the book, “Sketches of Prominent Citizens of 1876, with a few of the pioneers of the city and county who have passed away.” Both Nowland and Cravens were pioneers from Indianapolis’s early days.

In the mid-to-late 19th century, Indianapolis was slow-growing and a small enough large town for the people who populated it to be friendly, neighborly and still very much of hard-working pioneer attitudes. The streets were dark and muddy; lined with taverns and cold houses lit by candle light. The 1830s saw the budding start of manufacturing and construction of factories and all was flavored with Gemütlichkeit from German immigrants who started arriving in the 1840s.

Nowland was born in Kentucky and came to Indianapolis late in the year 1820 with his pioneering parents, Matthias Nowland and Elizabeth Byrne. The first abode the family lived in was a cabin in the middle of Kentucky Avenue. Nowland, after spending some time in Washington D.C., returned to Indianapolis. He worked for various Indianapolis newspapers and wrote two history books about Indianapolis: “Early Reminiscences of Indianapolis” and the aforementioned “Sketches of Prominent Citizens of 1876.” He died in 1899.

Cravens, born in Maryland, was the daughter of William Stewart and Sophia Doud. Her father, William Stewart, a bookseller from Hagerstown, Maryland, arrived in Indianapolis in 1853 and set up a book shop on Washington Street with Silas T. Bowen. In 1871, Emily married Junius Cravens, a dentist of Indianapolis. She died in 1932.

How did the two meet? Maybe in her father’s book store or through a literary club, such as the Fortnightly Literary Club, to which Emily Stewart Cravens belonged. Whatever the connection, the lady obviously deserved more than just a simple signature from Mr. Nowland. 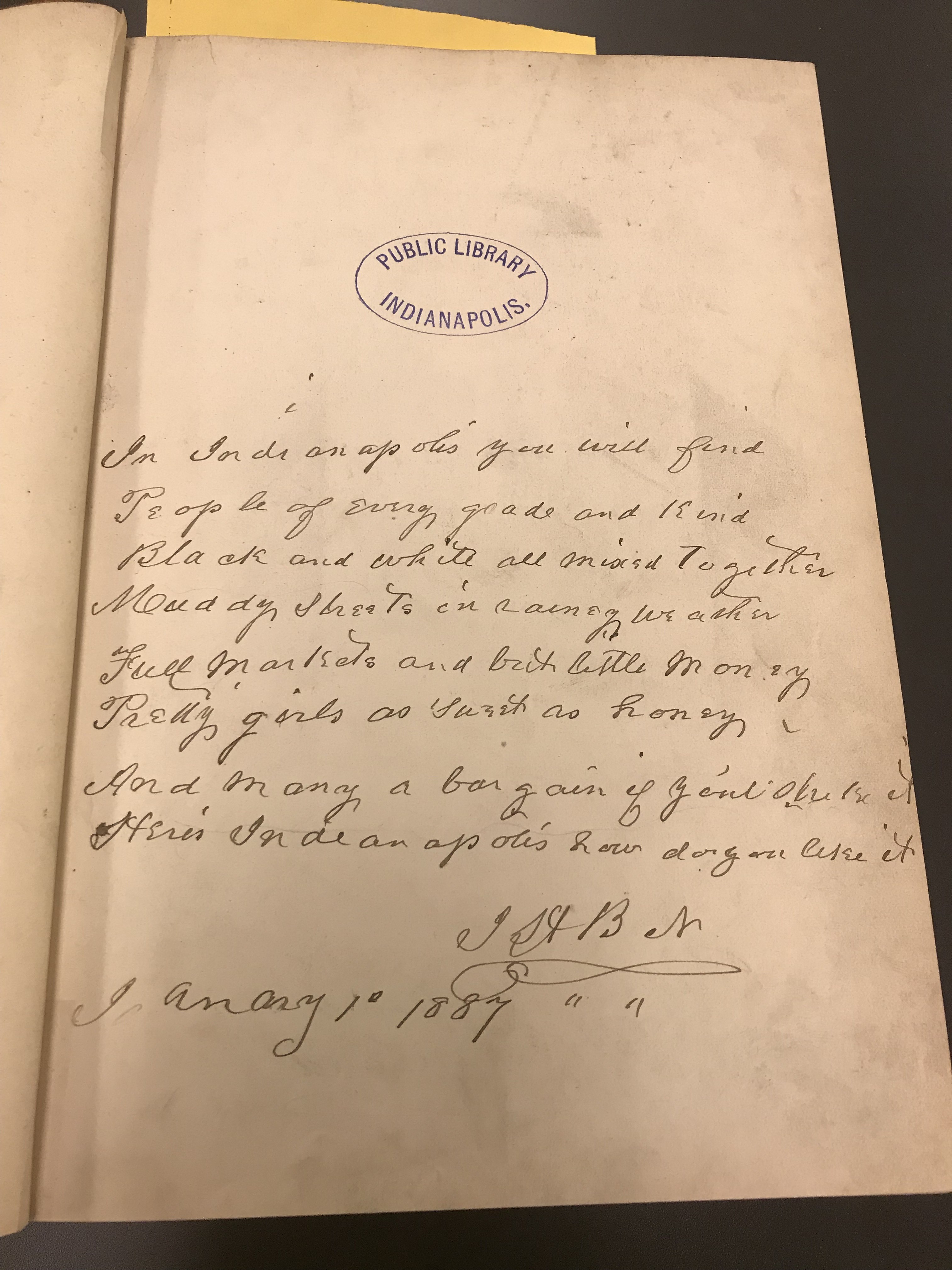 I have tried my best to transcribe the poem Mr. Nowland wrote to Mrs. Cravens in 1887. My note in parentheses, the poem follows:

5 thoughts on “Found in the Genealogy Division: From one pioneer to another, a special inscription”