As we recover from the crush and hubbub of this year’s Indiana State Fair (not to mention snarfing all those elephant ears and fried pickles), take a gander at a few gems from the fairs of the early 1930s in the Indiana State Library’s broadside collection. 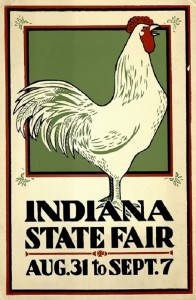 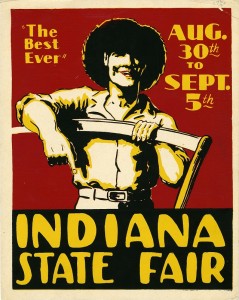 The 1930 and 1931 Indiana State Fair broadsides (sheets of paper printed on one side, often mass-produced for wide dissemination, such as posters) were simple but vibrant, using only two colors in addition to black and very little text. The subjects, a rooster and a farmer with his scythe, demonstrate the original intent behind state fairs as primarily agricultural exhibitions. 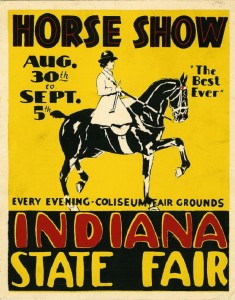 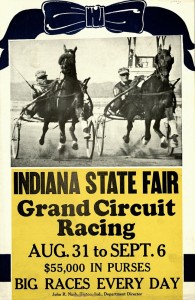 But like the fairs nowadays, those of the early 20th century featured many of the traditional entertainment staples we have today: Ferris wheels, cotton candy, and contests. The fairs of old just did it on a smaller scale. (Those in the 1930s only lasted about a week. Inconceivable!) Here are two broadsides from 1931 and 1932, respectively, announcing specific activities at the fair—the horse show and racing. The last broadside is from the Better Baby Contest at the 1930 state fair. While friendly competition is a longstanding tradition at all fairs, the Better Baby Contest at the Indiana State Fair, and others across the nation, represented something altogether more sinister. Between 1920 and 1932, white mothers entered their babies and toddlers in the contest, where the children were weighed, measured, and judged for mental and physical health using baby growth charts (which were later criticized as oversimplified and inaccurate). Those children rated the best were awarded ribbons and prizes, rather like livestock and baked goods. Although on the surface, the contest encouraged parents to take maternal health and early childhood development more seriously, in reality, the competition was fraught with the pseudo-science, racism, and ideology of the eugenics movement.

Now that I’ve thoroughly depressed you, let’s think back on all the fun we’ve had at the state fair over the past 17 days. This year’s highlights included:

All these broadsides and more are publicly available online. This collection and many others continue to grow, so be sure to check back from time to time to see the newest additions to the ISL Digital Collections, found at http://digitalcollections.library.in.gov.