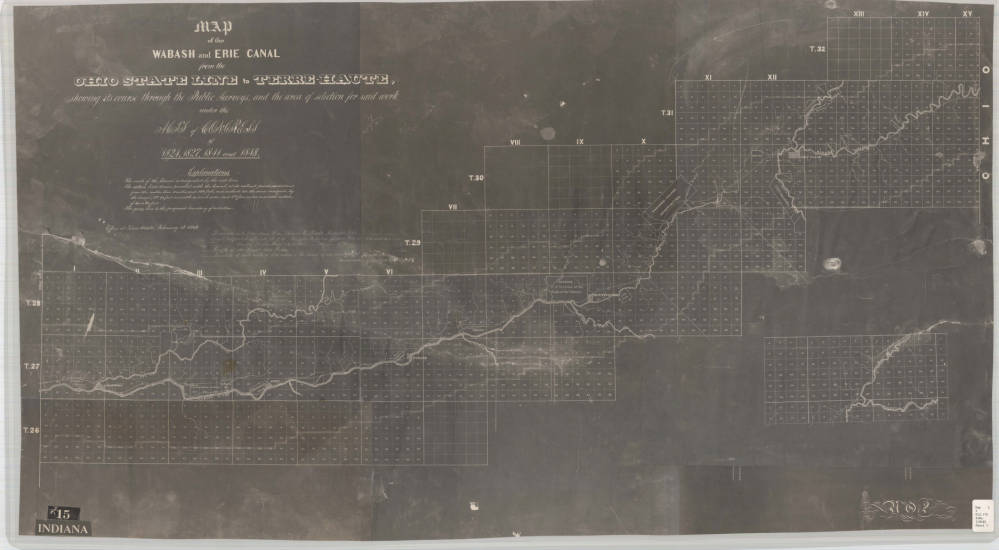 The canal ran through the wilderness of a largely unsettled part of Indiana. The canal period was crucial to the development and colonization of Indiana, especially to remote parts of the state north of Indianapolis. Ultimately, the Wabash and Erie Canal would connect Lake Erie to the Ohio River in Evansville.

We realize the map is not beautiful, but take a moment to examine the digitized map closely. The canal period coincides with Indian removal in the state. Clearly mapped are the reserve lands set aside for the Miami during the removal of Indians from the state – Jean Baptiste de Richardville, Little Turtle, Godfroy. Most of the reserve lands shown on these maps can be found in the treaty made at St. Mary’s with the Miami, Oct. 6, 1818 and a treaty signed at the Mississinewa in 1826.

By 1840, all this granted land was recollected, and tribes moved west.

Learn more about the Wabash and Erie Canal from the Indiana Historical Bureau’s “The Indiana Historian: Canal Mania in Indiana.” Especially interesting is an account of early travel along the canal recorded in J. Richard Beste’s published travel book, “The Wabash; or, Adventures of an English gentleman’s family in the interior of America” (London, Hurst and Blackett, Publishers, 1855). They take off from Terre Haute on Aug. 12, 1851. Available in full text from the Library of Congress, beginning on page 191 of Volume 2.

Click here to view a hi-res version of the map of the Wabash and Erie Canal from the Ohio state line to Terre Haute, and visit the Indiana State Library Map Collection to examine maps, county atlases, plats maps and other land descriptions.