Today we welcome guest blogger Andrew Rhoda of the Lilly Library at Indiana University. Rhoda is the world’s only puzzle curator.

The Jerry Slocum Mechanical Puzzle Collection at the Lilly Library is a collection of puzzles designed by the world’s most innovative designers of fascinating and confounding objects. The library’s collection of mechanical puzzles is the only one in the world available to the public. Mechanical puzzles are different from crosswords or jigsaw puzzles, which are what most people think of when they think about puzzles. In the book “Puzzles Old and New,” Jerry Slocum and his co-author Jack Botermans define a mechanical puzzle as, “…a self-contained object, composed of one or more parts, which involves a problem for one person to solve by manipulation using logic, reasoning, insight, luck and/or dexterity.” Some examples of well-known mechanical puzzles are the Rubik’s Cube, the tangram and the 15-puzzle. 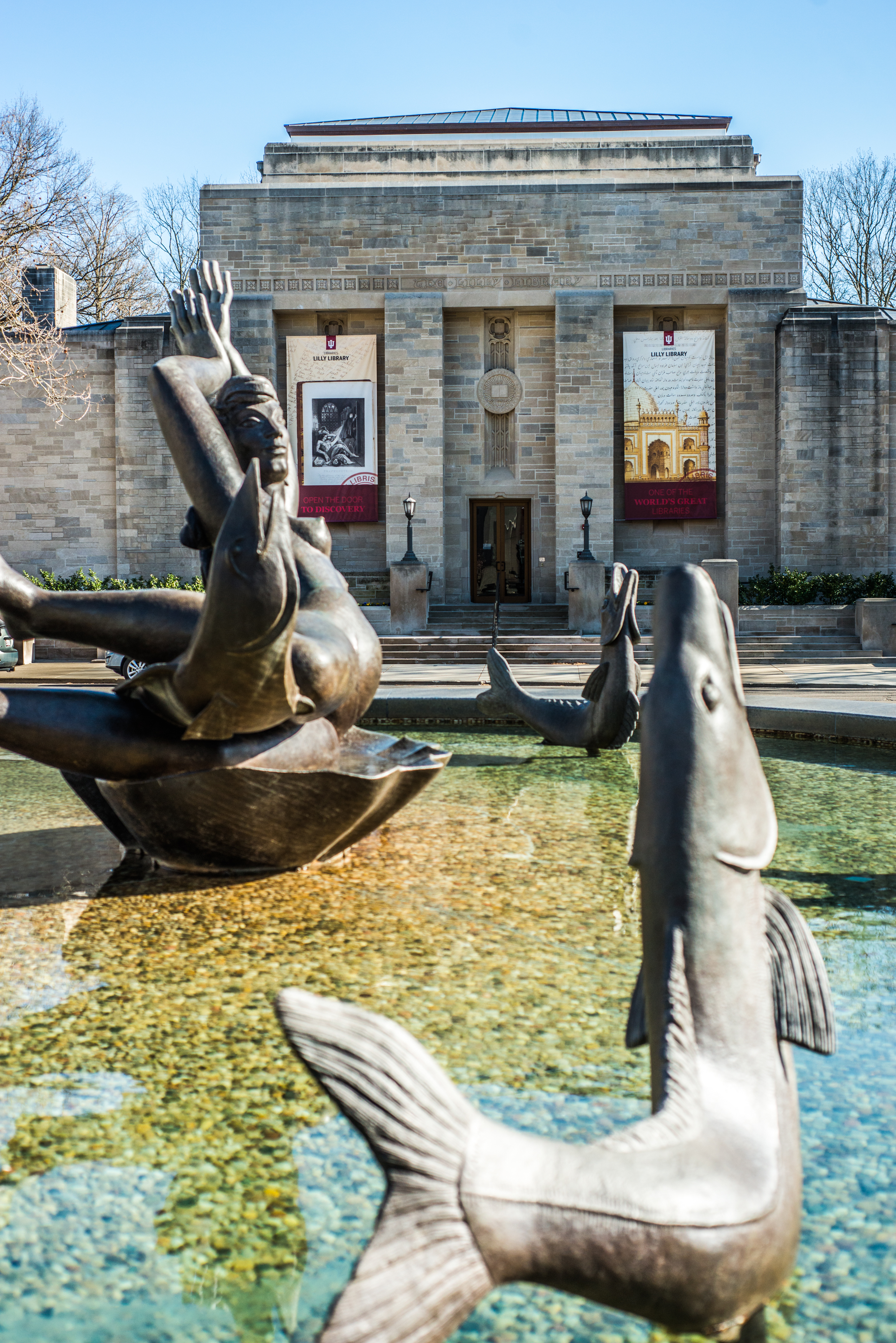 Mechanical puzzles have a long history. The oldest known mechanical puzzles were not even intended as entertainment. Romano-Celtic puzzle padlocks dating to the second century B.C.E. were small, ring-sized locks used as security measures. In the 19th century, the popularity of mechanical puzzles as entertainment increased. The first catalog of puzzles appeared in 1893, written by Professor Hoffmann. This book featured puzzles of all kinds; however, it is most notable for its descriptions of what we know as mechanical puzzles. These puzzles are known as Hoffmann Puzzles, as this work is the first historical reference for these puzzles. In recent years, technology has changed how mechanical puzzles are made. Throughout the 19th century and early 20th century, puzzles were usually made of wood or metal. However, in the later 20th century and 21st century, new technologies have emerged, like three-dimensional printing, that are changing how puzzles are made. Modern puzzles designers now create these ingenious objects using classic techniques and modern technology to challenge puzzle solvers. 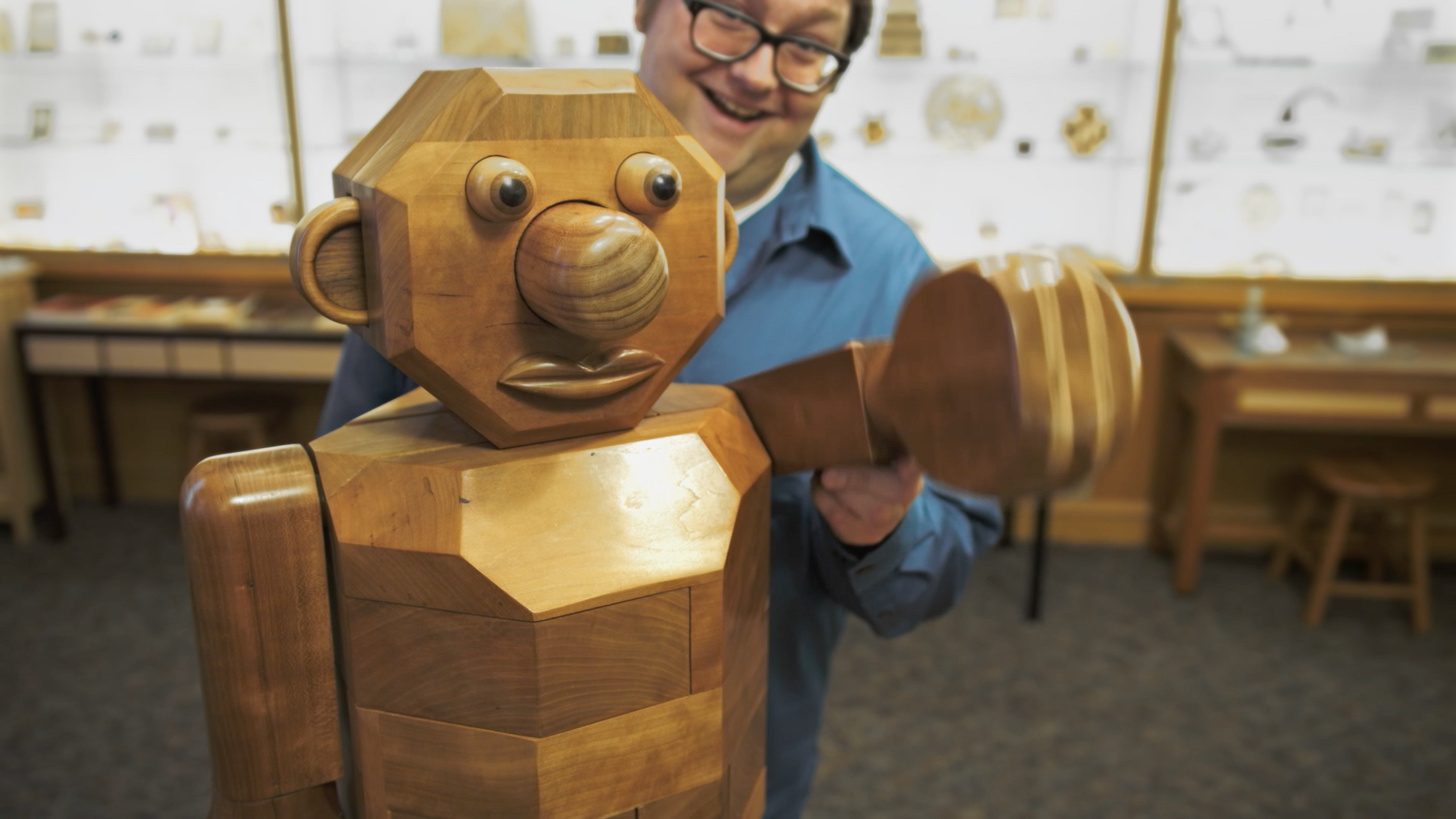 Slocum was born near Chicago, and in 1939, he began collecting puzzles at the age of eight when his parents brought back a puzzle from the New York World’s Fair. That puzzle was the Trylon-Perisphiere, which was a small plastic interlocking puzzle. From that point, Slocum began collecting mechanical puzzles of various kinds. He began researching mechanical puzzles, and when he could not find puzzles to purchase, he learned how to make his own copies of those puzzles. 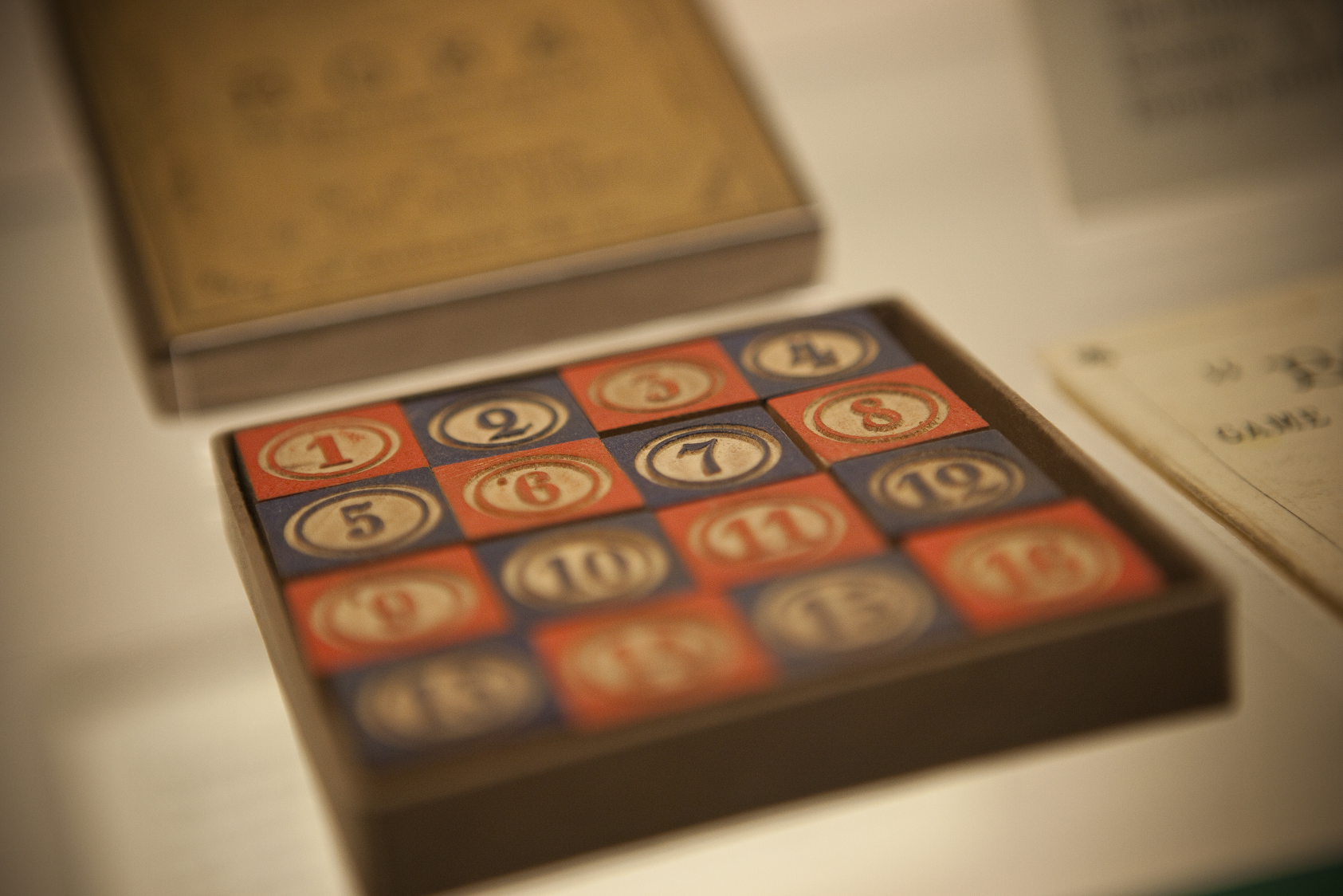 Sequential movement puzzles feature a solution that requires a sequence of moves to solve the puzzle. The Boss Puzzle, a version of the 15-puzzle, has a certain set of moves that puts the numbered blocks in order. Courtesy of Indiana University Libraries.

In 1993, Slocum established the Slocum Puzzle Foundation to promote the use of mechanical puzzles both for entertainment and for fostering creative thinking and problem solving. He has also worked with various institutions across the country to exhibit puzzles from his collection. 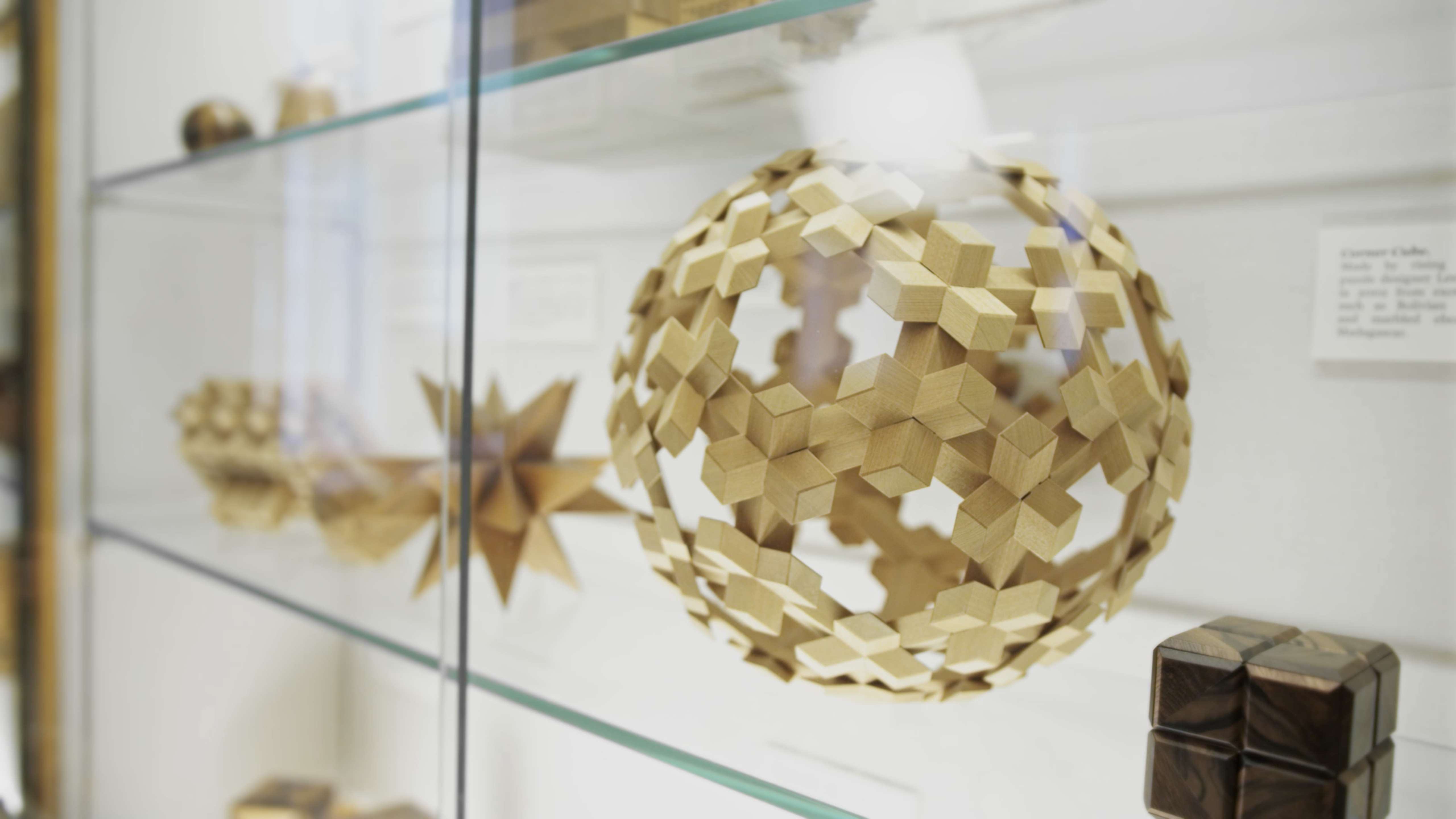 Interlocking puzzles come in many different shapes. They can be simple to very complex, like this puzzle “Polyhedron 32” by Yashirou Kuwayama. Courtesy of Indiana University Libraries.

Through his research, Slocum developed a system of categorization for mechanical puzzles. The system includes ten categories, defined by what needs to be done to the puzzle to solve it. For instance, the first category is “put-together” as the solution is achieved by putting the pieces of the puzzle together. Modern puzzle designers have further developed the categories, both by developing specializations in those categories, and by combining qualities of two or more of them. To match these developments Slocum added sub-categories in his system. 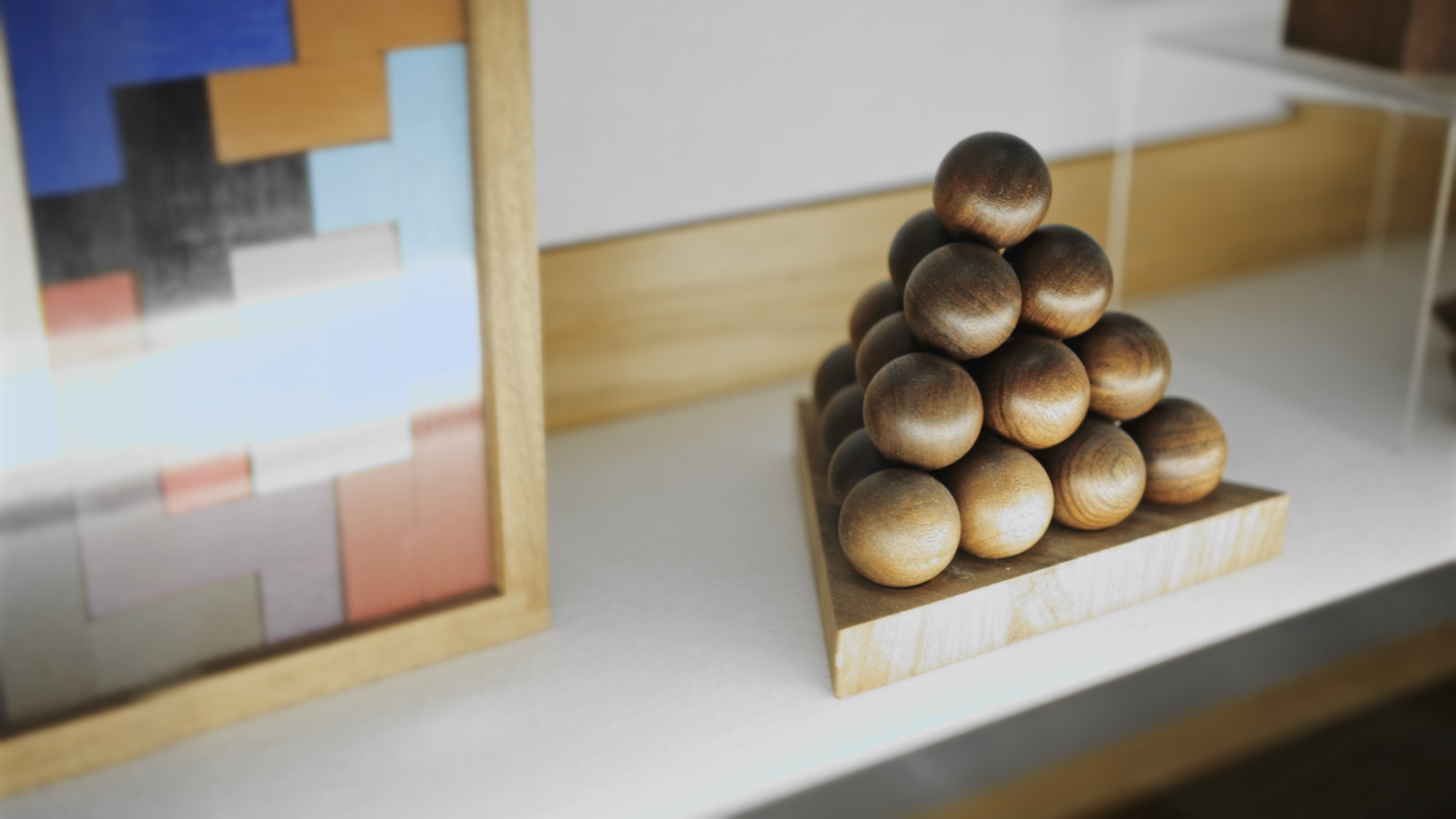 Put together puzzles can be two-dimensional or three-dimensional, such as Piet Hein’s “Pyramystery” shown here. Courtesy of Indiana University Libraries.

To solve some puzzles in these categories, like the vanishing puzzle or impossible puzzles, the moving of pieces is not the point, but rather the description of how the puzzle works or was made. 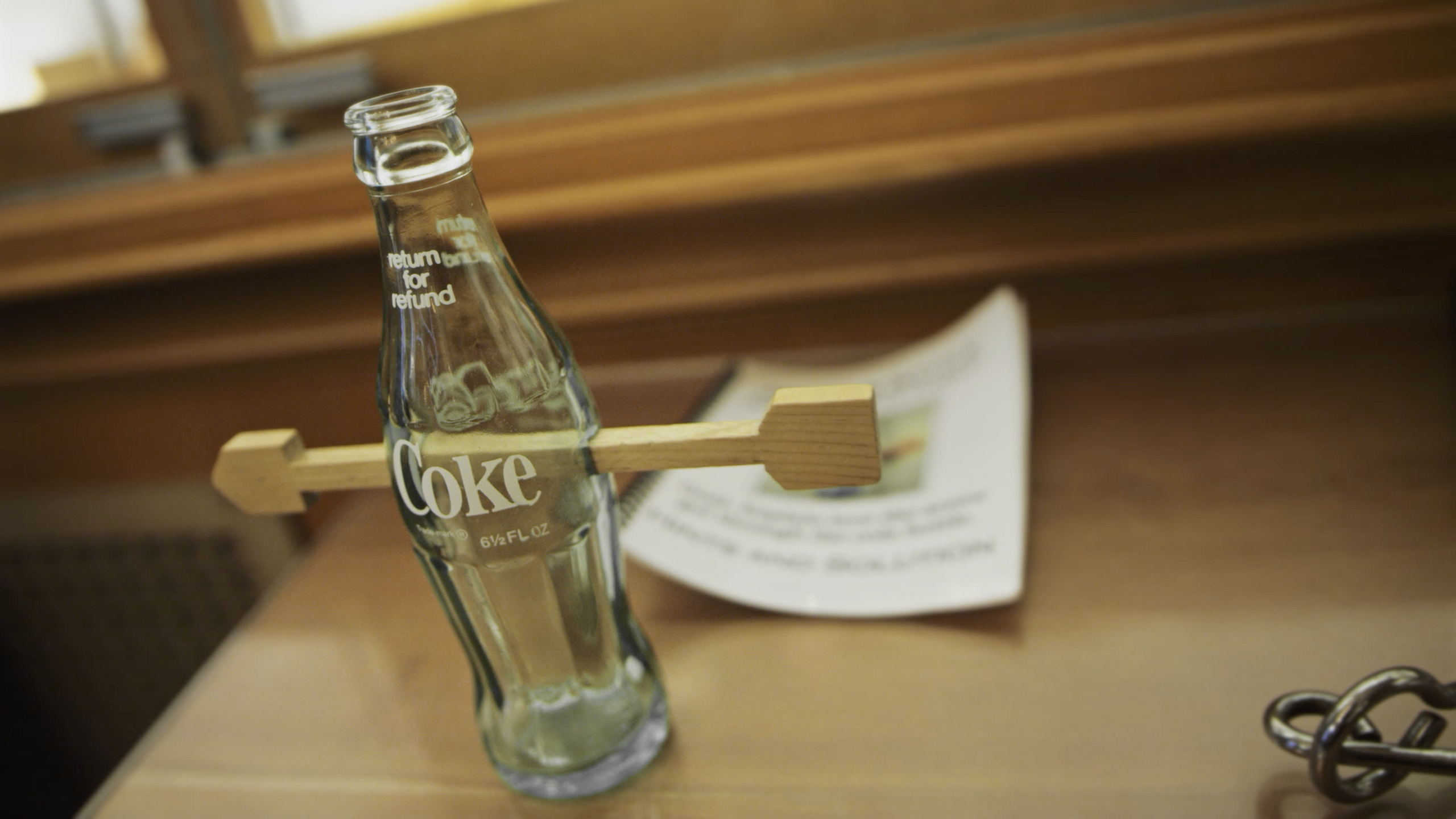 Impossible puzzles do not require any disassembly; you only have to answer a simple question: How did the arrow get through the bottle? Courtesy of Indiana University Libraries.

In 2006, Slocum began donating his collection to the Lilly Library. Since that time, he has been donating portions of his collection every year. Currently, the Slocum Mechanical Puzzle Collection consists of over 30,000 of puzzles, in addition to books and manuscripts relating to mechanical puzzles. These materials are accessible in the Lilly Library’s Reading Room and – barring a puzzle being in conservation – the contents of the puzzle collection are available for use. When requesting puzzles to consult in the Reading Room, it is best to allow three to four days processing time so that all items can be gathered for the visit. The puzzle collection is searchable through the Jerry Slocum Mechanical Puzzle Collection database. 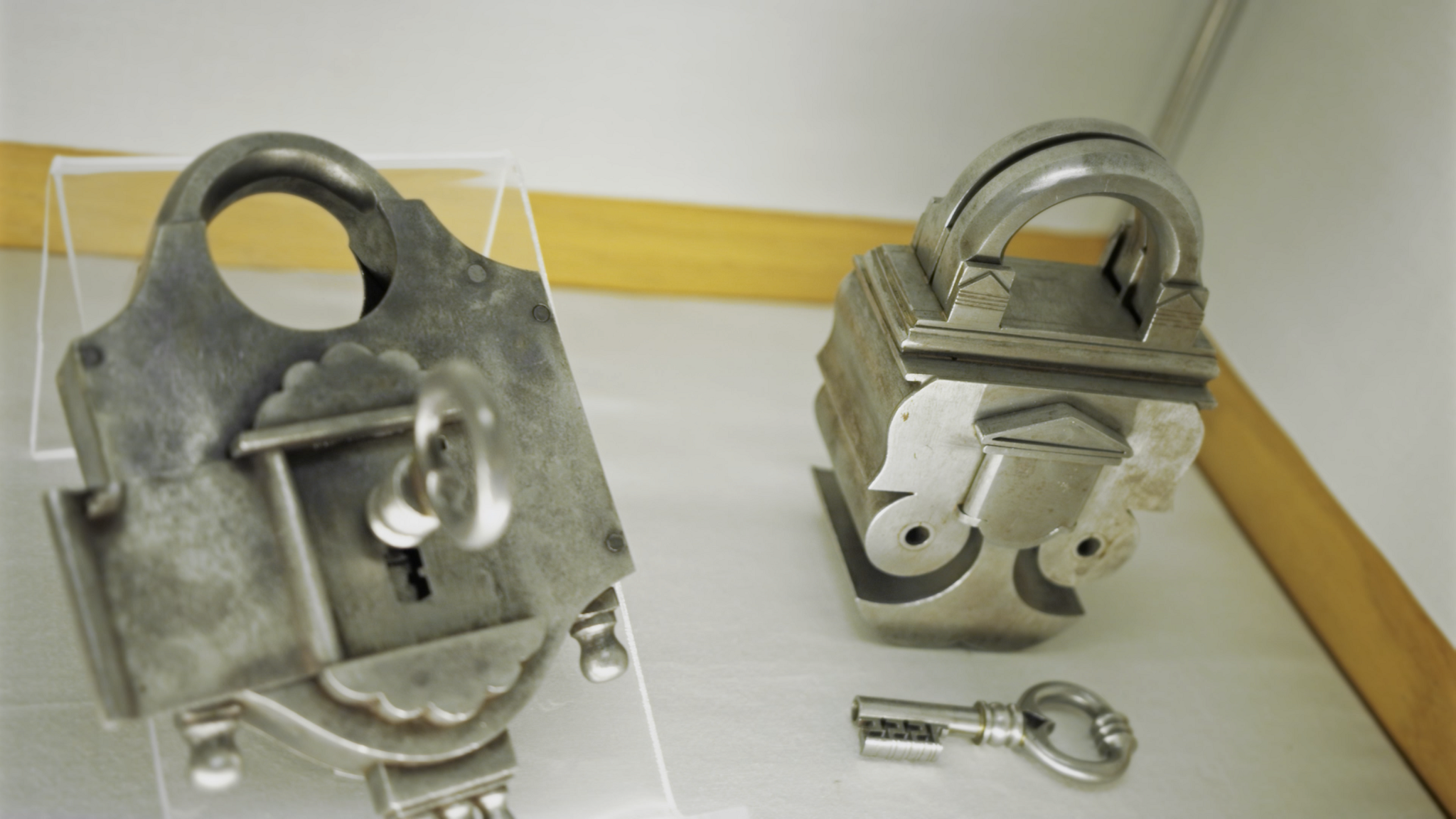 Puzzle locks, such as these Viennese Master Craft Locks from the 19th century, are the oldest category of mechanical puzzles known. Puzzle locks are a sub-category of take apart puzzles. Courtesy of Indiana University Libraries.

A permanent exhibit of highlights from the collection is on display in the Lilly Library Slocum Room located at 1200 East Seventh Street in Bloomington. The exhibit contains examples of each of the ten mechanical puzzle categories in Slocum’s category system. As a companion to the exhibit, there are also hands-on puzzles for visitors to the Slocum Room to solve while viewing the exhibit. In this way, visitors can see the types of puzzles and they can try similar puzzles.

If you would like to visit the Slocum Room or see a particular puzzle, please contact Andrew Rhoda, curator of puzzles, with questions about the collection and for information about scheduling tours or group presentations.