June 23 marks the 50th anniversary of the 1972 passing of Title IX, a crucial section of the Education Amendment of 1972 that prohibits sex discrimination in education for institutions receiving federal funding. Hoosiers, of course, have a special connection to the law as it was formally introduced in Congress by Indiana Senator Birch Bayh. Born in Terre Haute in 1928, he served in the Indiana House of Representatives from 1954-62 and the U.S. Senate from 1963-81 and his work during this time had a powerful and lasting impact on this country. Remembered also for authoring the 25th and 26th Amendments to the U.S. Constitution – which laid out presidential succession and lowered the voting age to 18 – as well as the Bayh-Dole Trademark act, he is best known for his work on equal rights for women. His support went beyond his role as co-author of Title IX, which was co-authored by Representatives Patsy Mink and Edith Green.

The collections at the Indiana State Library Rare Books and Manuscripts Division provide a number of contemporary artifacts that help make the culture that led to the passing of Title IX more tangible 50 years on.

Senator Bayh
The State Library’s holdings include both the Birch E. Bayh, Jr. collection (S0083) and photographs of him in the General Photograph Collection (P000). Though the collection does not include materials directly related to the passing of Title IX, the Birch E. Bayh, Jr. collection (S0083) contains campaign materials from 1975-76 that emphasize his continued commitment to equal rights for women, declaring “No other member of Congress can equal Bayh’s active and effective support for women’s rights legislation.” 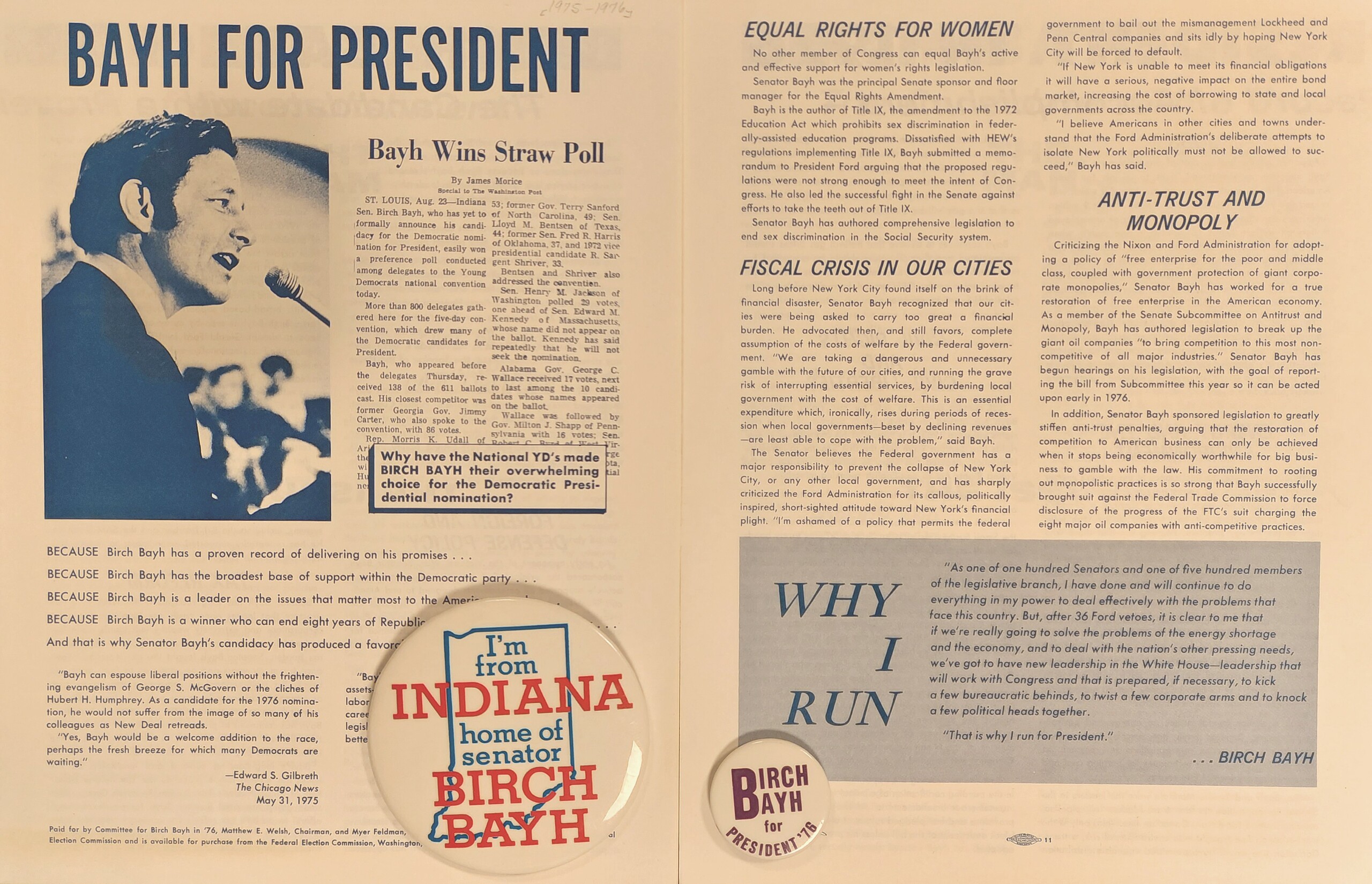 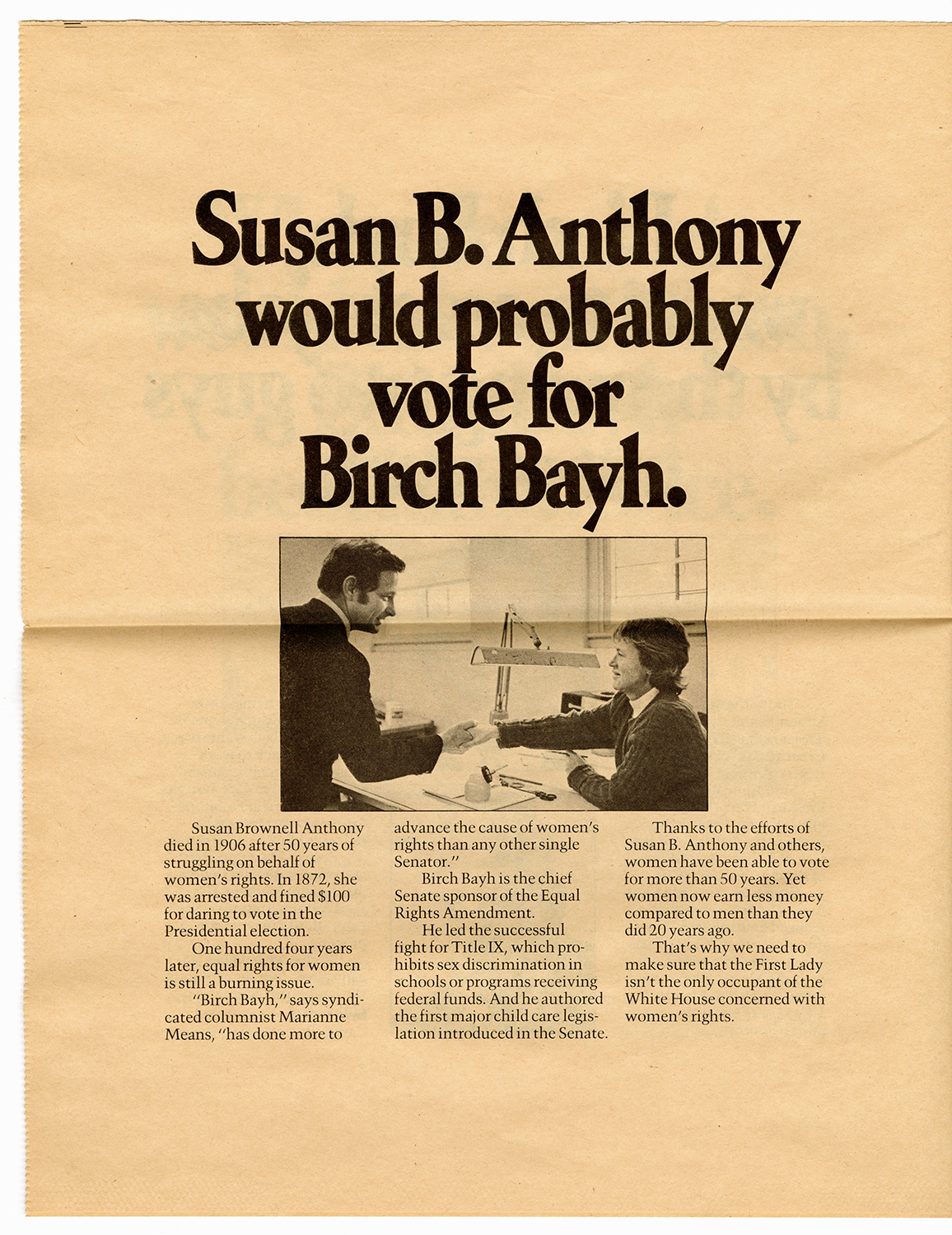 The photographs of Bayh in the General Photograph Collection mirror Bayh’s commitment to family, which has always informed the way he viewed women. He has said that commitment to equal rights was strengthened by his wife Marvella Hern Bayh.

He said of her:

“From time to time, she would remind me what it was like to be a woman in a man’s world. Without her, I would not have been in a leadership role.”

After Marvella died of breast cancer in 1979, Bayh married another formidable woman: Katherine “Kitty” Halpin, an ABC news executive, who continues her husband’s work to educate the public on the importance of Title IX in his absence. 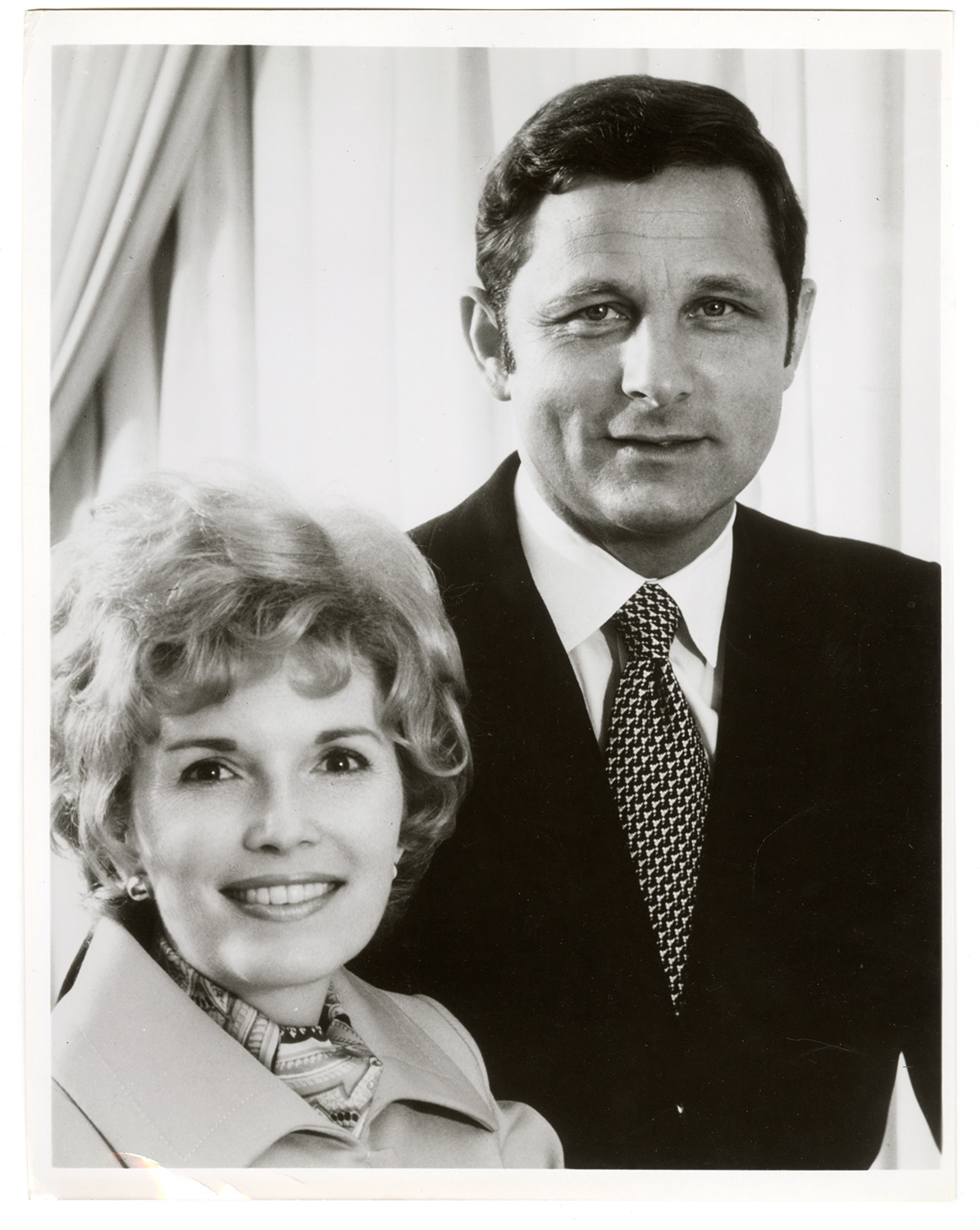 Reactions
First-hand reactions to Title IX survive among the Indiana State Library’s manuscript collections and provide insight into the number of misconceptions there were about the law. The Earl F. Landgrebe papers (L625) contain numerous letters from concerned constituents. As a member of the U.S. House of Representatives from 1969-74, Landgrebe received correspondence from organizations and private citizens on the subject. They provide an interesting snapshot of fears which time has proven false. One such letter, for example, states: “one of the apparent effects of the Title IX requirement is that athletic departments will not be able to spend as much money as they previously had on athletic programs offered to men.” This was a common cry from detractors of the law, which also went further to suggest that Title IX would destroy college sports altogether. Yet, 50 years on the business of college sports continues to thrive. 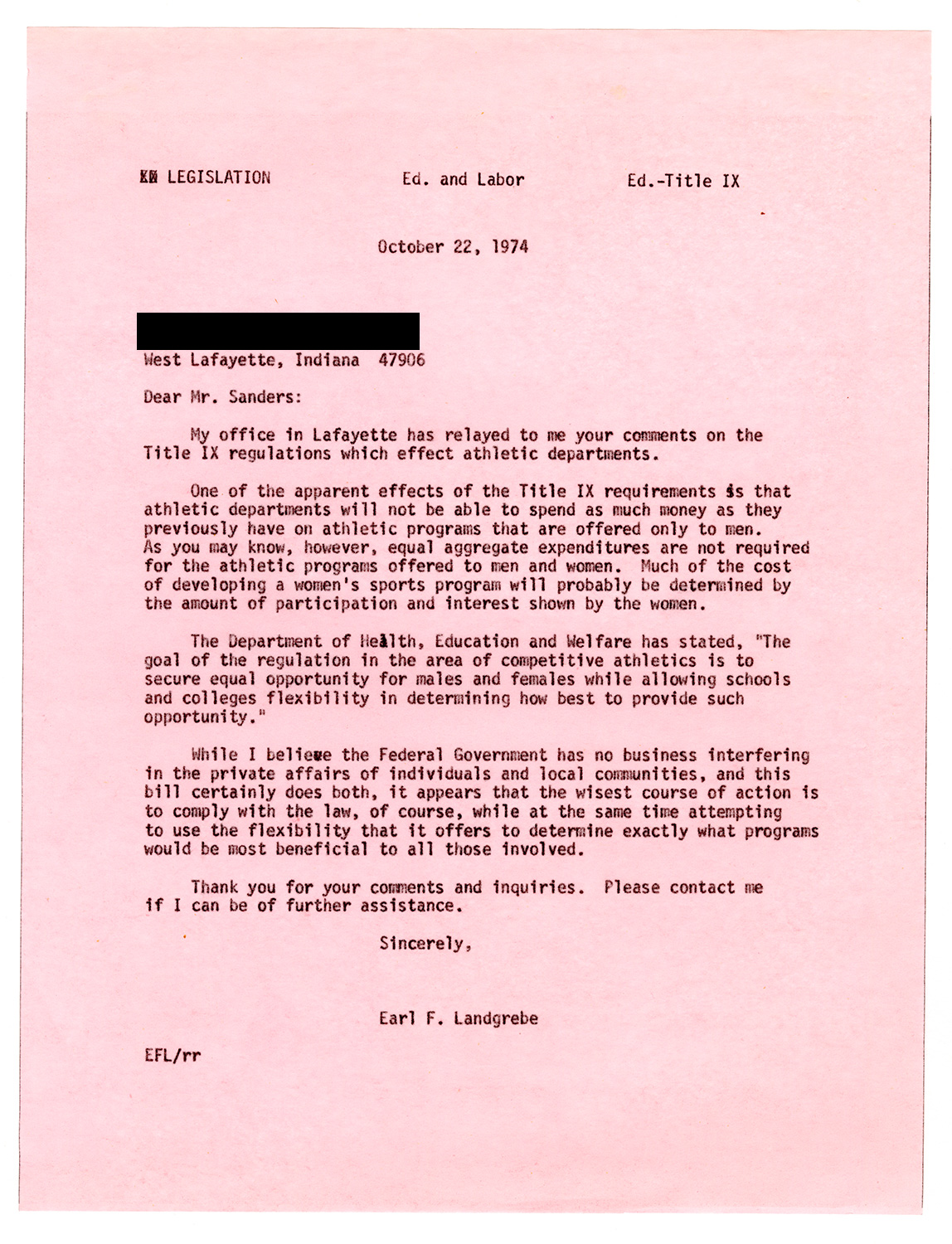 Fears about sharing equal funds between athletes are expected; less obvious were fears that Title IX would prohibit all manner of programs frequently separated by sex: sororities and fraternities, men’s choruses, women’s clubs, scholarships and other programs created explicitly to aid women, and even separate sex education for young boys and girls. This reflected a basic misconception of how the law would be applied and, like college sports, Greek life and sex-based organizations continue today unharmed. 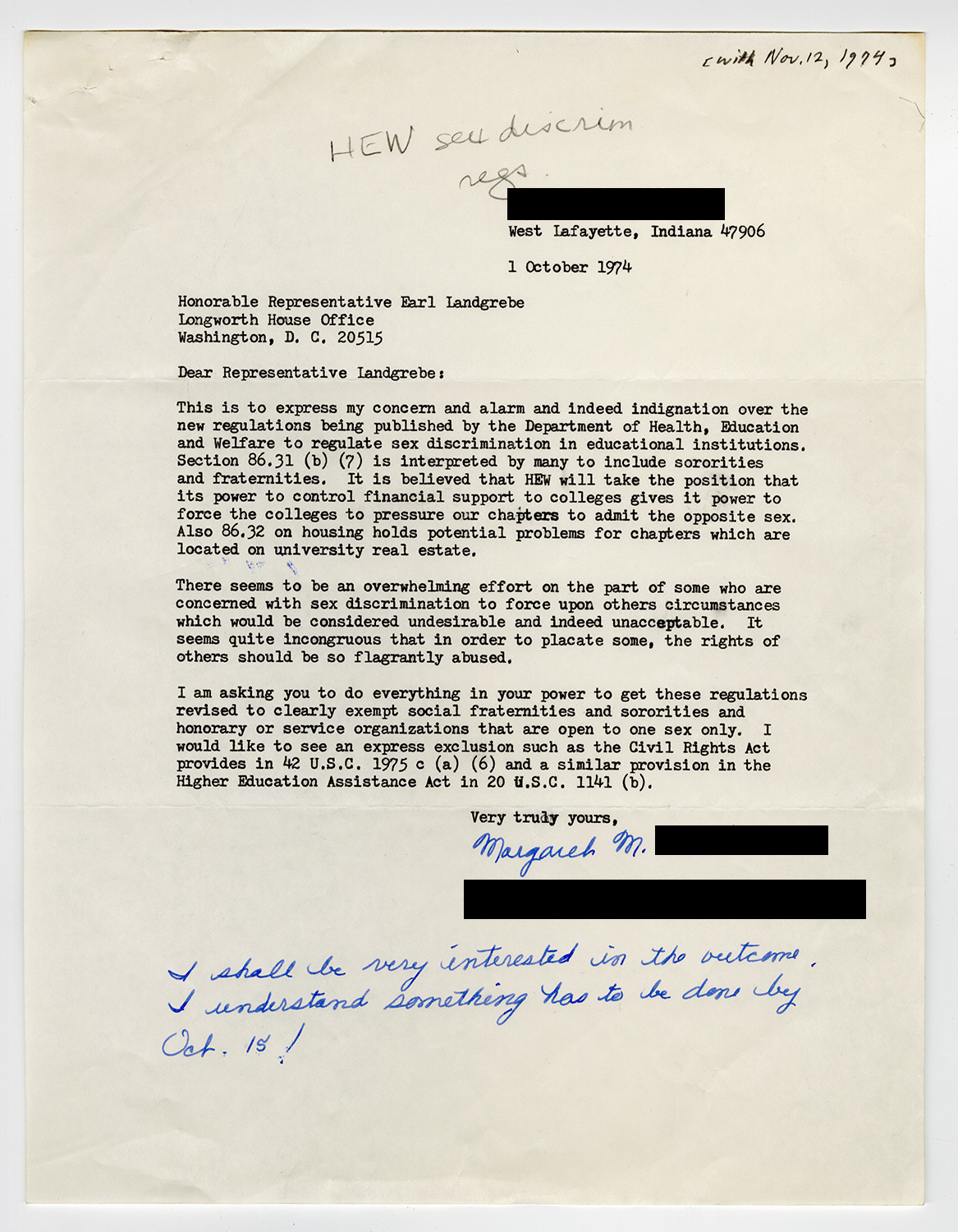 Impact
Most people have grown accustomed to a post-Title IX America and many are not old enough to remember education before its passing. It is difficult to talk about the impact because no statistics truly reflect the way in which it has changed the day-to-day reality of education and subsequently high school and collegiate sports. In remarks published in the Fordham Law Review, Katherine Bayh said “Title IX grew out of listening,” listening to stories of women’s struggles for sometimes basic access to education. 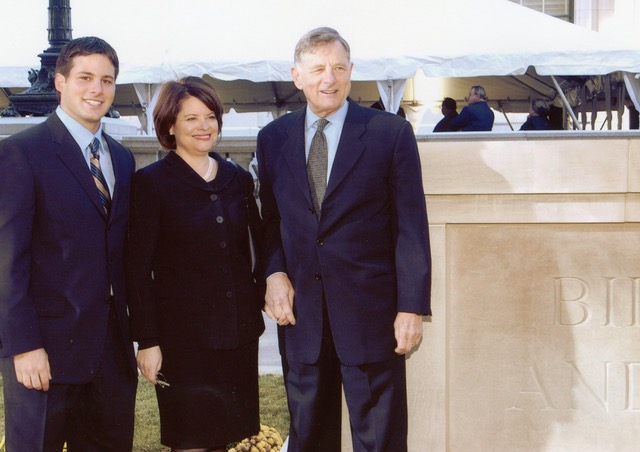 Christopher, Katherine and Birch Bayh at the dedication of the newly-named Birch Bayh Federal Building and United States Courthouse, Oct. 24, 2003.

She recalls that he was touched by a story from a constituent whose daughter was rejected from Purdue Veterinary School on the basis of sex. It’s something that is unthinkable now, but even after American universities began admitting women, many instituted limitations on how many could be in a given class. What’s more, even once women were admitted, the expectations for them were lower and women lived with the stereotype that higher education was merely a place to find a husband.

The nature of archives is that they provide primary sources that can be used to better understand history. These snapshots of the past are only a small part of the story. For more information, the Indiana Historical Bureau will be celebrating a whole week of Title IX facts spanning the June 23 anniversary date. Don’t miss it! Follow IHB on Facebook and Twitter @in_bureau.