In the Genealogy Division of the Indiana State Library, I learn about fascinating people and their equally fascinating jobs each day by researching U.S. census records. Those who live and work in the Hoosier state are eclectic individuals with wide-ranging career choices. It seems fitting to highlight some of the quirky, adventurous and even adorable occupations that I have found over the years:

Frank Liebtag
Frank Liebtag, a 5-year-old boy living at 905 Eugene St. in Indianapolis in 1910, was probably a delightful little clog dancer. About a year earlier, he was voted prettiest baby in the baby show at the Marion County Fair. There is no mention of him dancing for the judges, but I have a suspicion that may have been what won them over.

Hellena Thiers
Hellena Thiers, a 33-year-old woman residing with family in Fulton County in 1880, toured the country as a “celebrated lady aeronaut” during her career as a balloonist. She directed the construction of a balloon named General Grant that was taken to Woodward’s Gardens amusement park in San Francisco in 1879.

It was a dangerous profession. It is reported in the Oct. 16, 1878 Angola Herald that after a cancelled balloon race between Theirs and a Professor Harry Gilbert, he was injured in a crash when he took to the air during bad weather conditions. “Thence the air-ship veered to the top of another tree, striking with such force that it was ripped wide open, and descended like a ball of lead…” 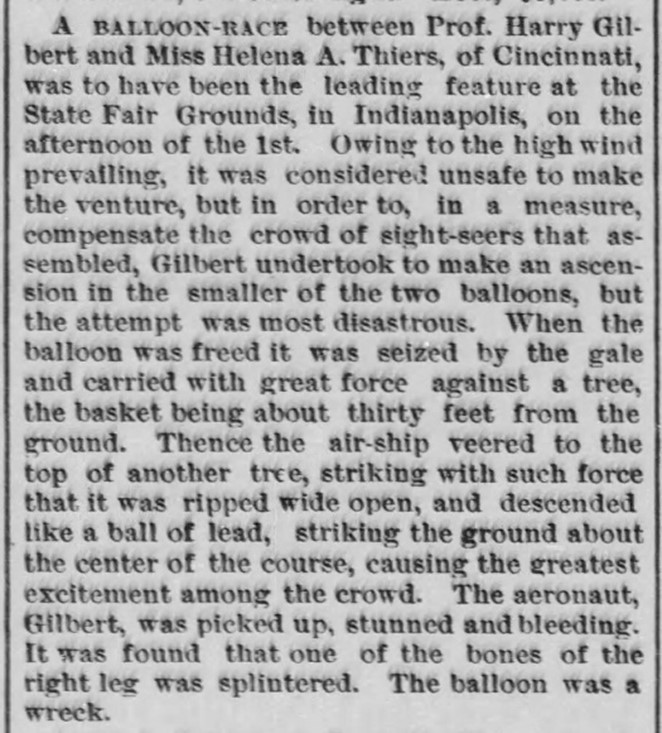 Nellie Pine
In 1870, a Mrs. Nellie Pine from South Bend was practicing as a clairvoyant physician. Her services were advertised frequently in the local papers at the time. 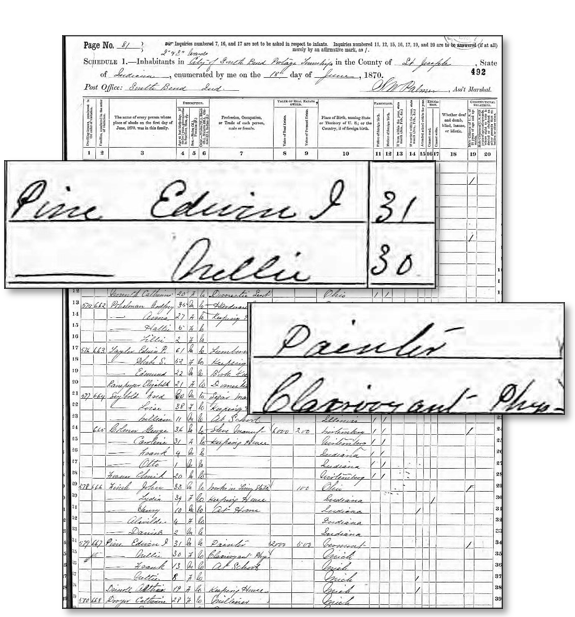 In the July 1, 1867 New Albany Daily Ledger, someone going by A. Citizen writes advertising her services, “Are you sick? Yes, I am sick, and sick of humbug Doctors…Go and see Mrs. Pine if you want health; I have proved her power.” 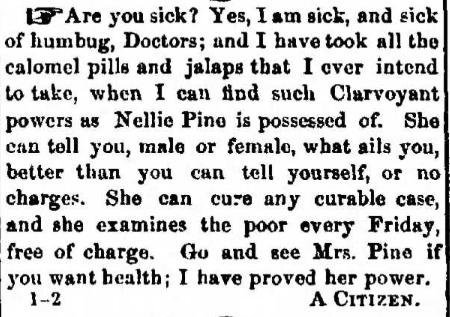 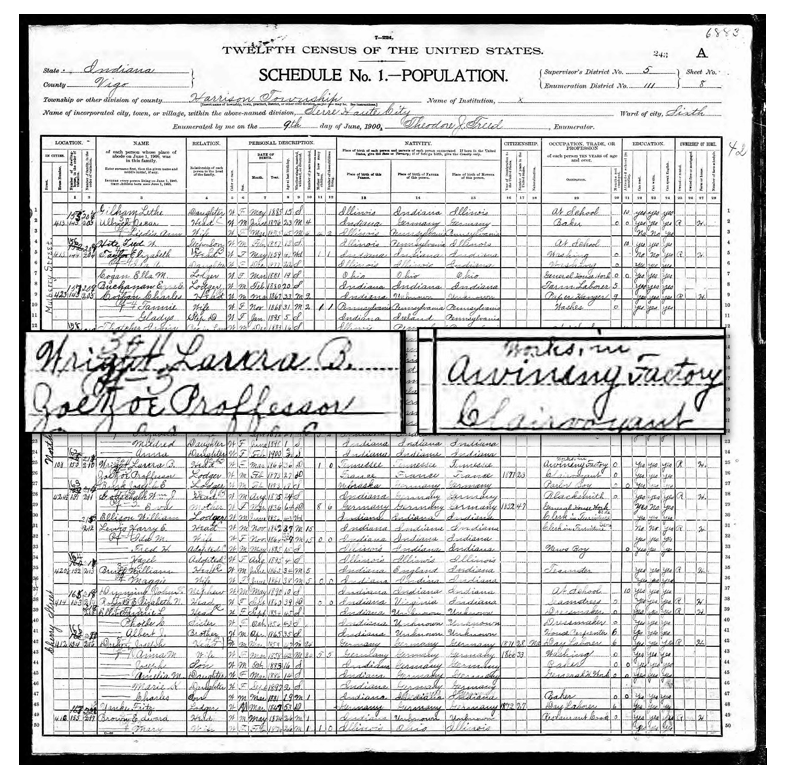 He was arrested for stealing the ring of Laura Wright, the woman he was lodging with at the time. This tongue-in-cheek article from the Evansville Courier mentions the census by incorrectly reporting:

An enterprising census enumerator got Zoe Zoe’s real name before the fortune teller was taken back to Terre Haute, but nobody else did as none of the police officials are able to perform his feats and give names unless the person will talk – and Zoe Zoe wouldn’t. The local police do not think the Terre Haute officials have a very strong case against the clairvoyant, and expect to see him back here lifting the veil for gullible Evansvillians at a liberal price per lift.

In reality, the suspected thief’s true identity remained a secret, even to the census enumerator. 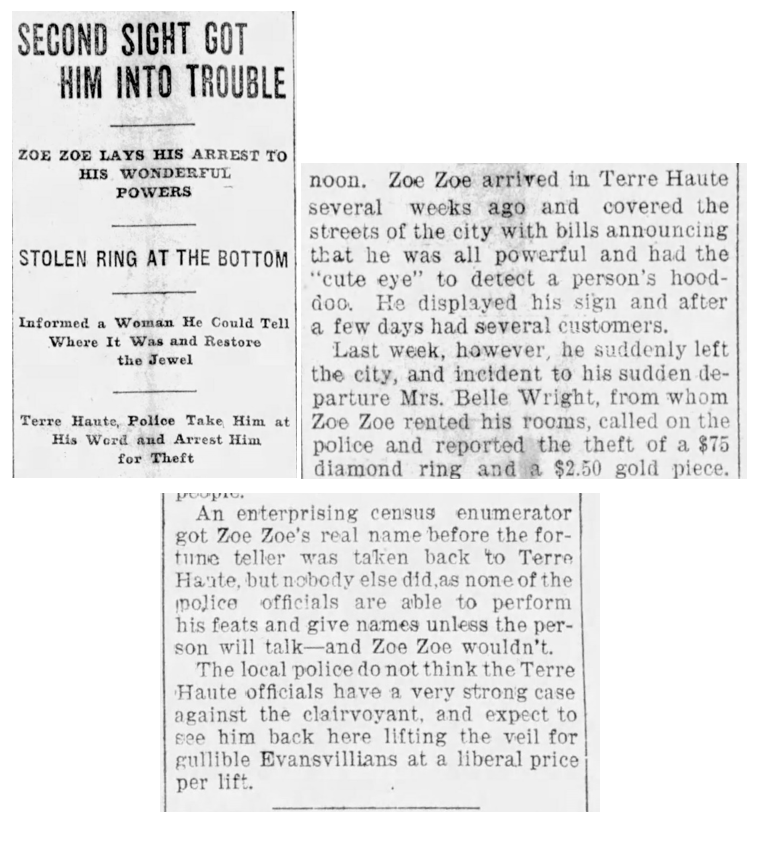 Naitto Sisters
Circus performers were enumerated at the Fair Grounds Hotel on April 8, 1940. Walja Yu, also known as Ala Ming or Ala Naitto, came to town with her family to perform a high wire act.

In the newspaper article below, she is shown walking the wire with her sister, Nio. “Sisters who walk a straight line, are the Naittos, who do new and startling feats on the tight wire in the middle ring of the Ringling Bros. and Barnum & Bailey Combined Circus…They are the only girls in the world accomplishing somersaults on the tight wire.” 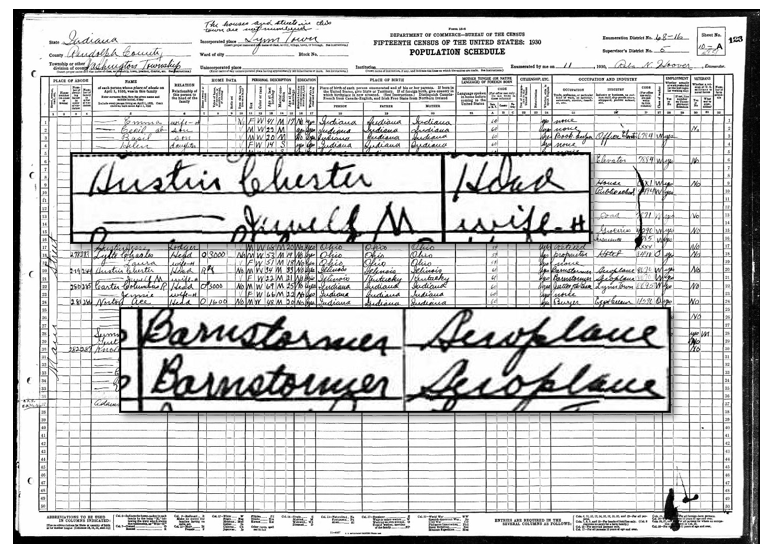 Chester and Jewell Austin, in Randolph County in 1930, listed their occupations as barnstormers, a term for those that performed airplane stunts such as wing-walking and parachuting. Based on the description in the April 27, 1930 Star Press, their act was quite the sensation. Chester would hang from a rope ladder as he picked a handkerchief up from the ground. Jewell was a parachute jumper, and she piloted the plane used in the act. 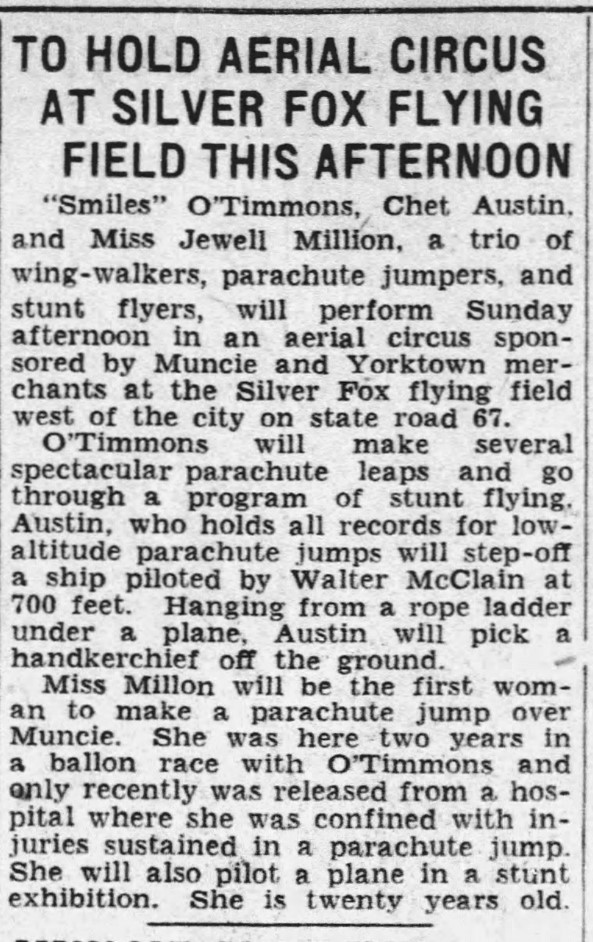 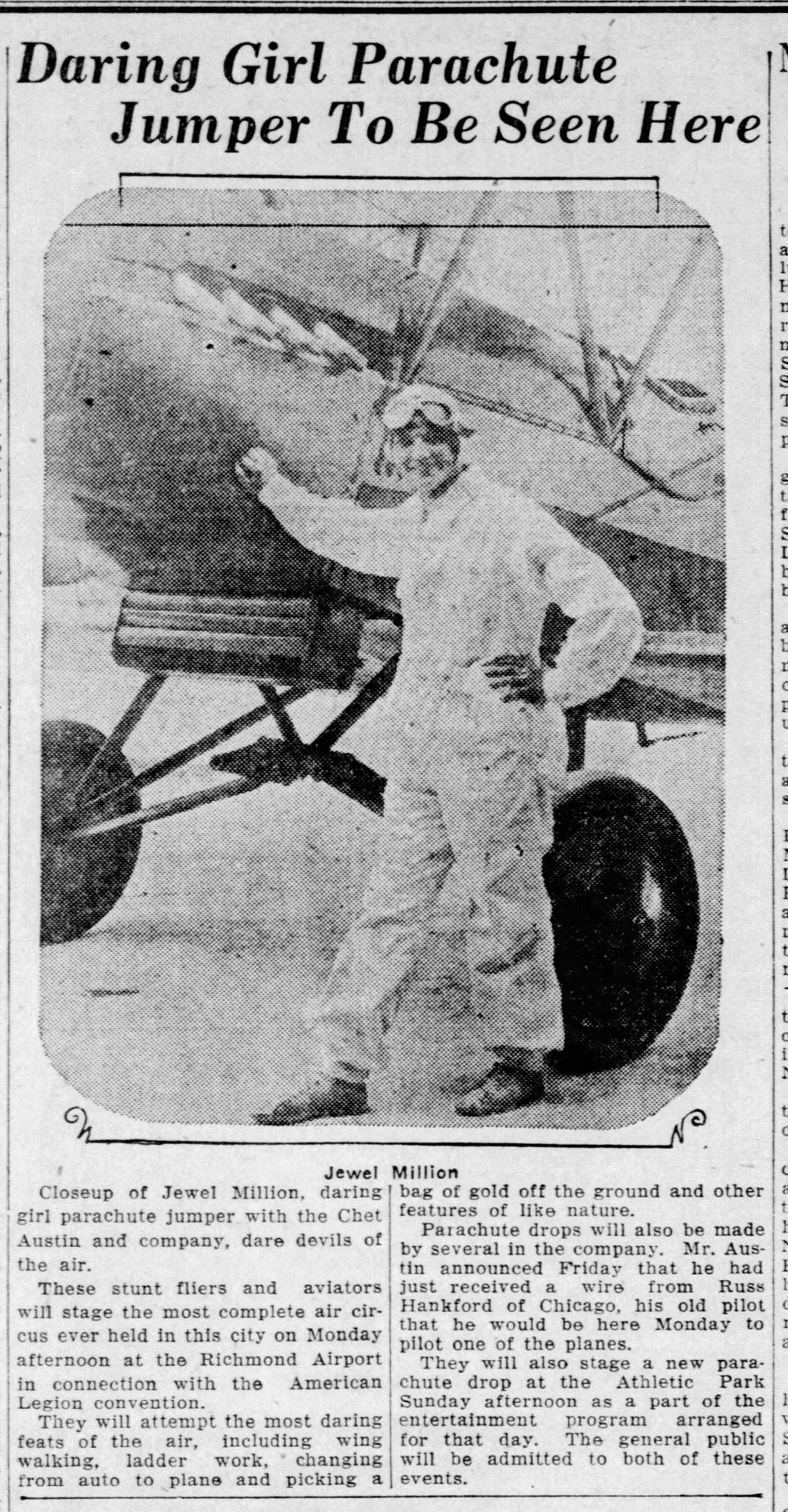 Joseph Burkholder
It’s likely whoever reported Joseph Burkholder, a 47-year-old in 1870 Whitley County, Indiana as, “too lazy for anything,” was having a little bit of fun at his expense or didn’t think much of his work ethic. Either way, the enumerator recorded the disparaging comment and now its history. 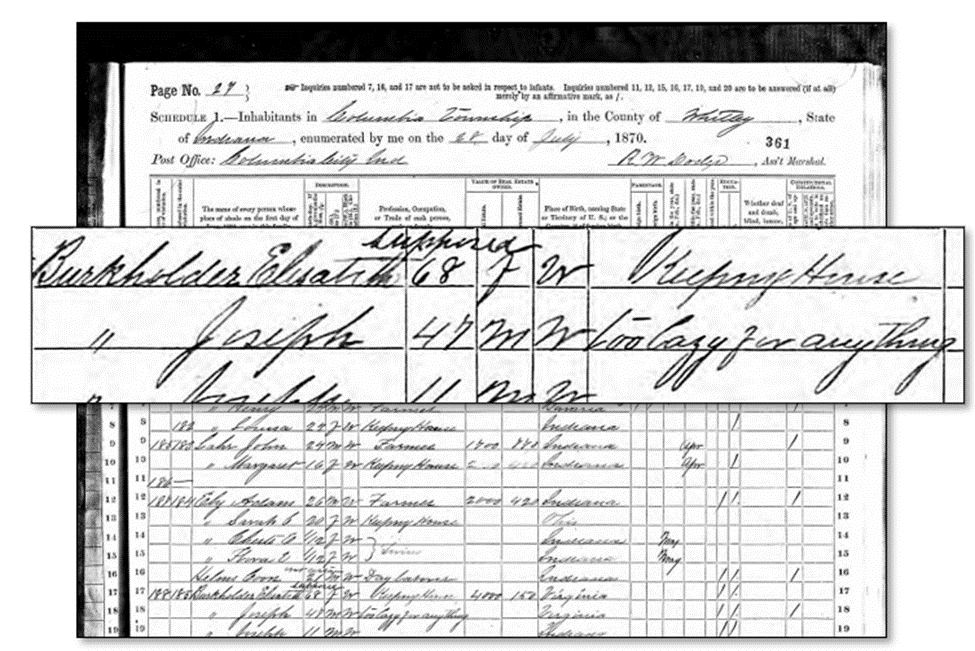 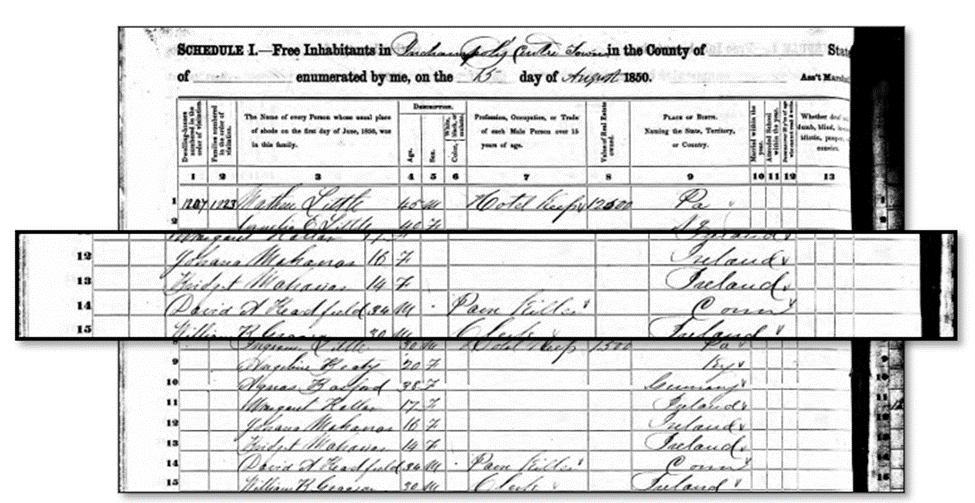 After a bit of research, I found out he was likely the same individual listed in the Nov. 4, 1852 Indianapolis Daily State Sentinel as a distributor of Perry Davis’ Vegetable Pain Killer. It was a mixture of opium, alcohol and other various ingredients. It was marketed at the time to both adults and children to treat pain caused by anything ranging from cuts and bruises to cholera.

According to the notice in the paper, Redfield had an injunction against him for not paying debts owed as an agent of Davis’ Pain Killer. This bit of trouble may be why he is not listed as a pain killer on later censuses. 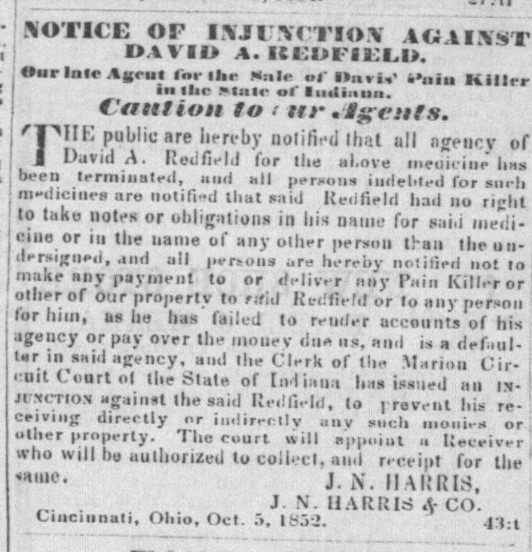 Cheerful Gardener
It’s fitting that a man with an attention-grabbing name like Cheerful Gardener would have an equally noteworthy career. Surprisingly, he wasn’t actually a cheerful gardener by profession. He, his wife Mary and a boarder named Violet Clement were elephant trainers for the circus in Miami County in 1930. He trained them to do a number of tricks, including carrying people about with their head in an elephant’s mouth. Cheerful later moved to Los Angeles to train elephants for Hollywood films. He was inducted into the International Circus Hall of Fame in Peru, Indiana where one of his uniforms is on display. 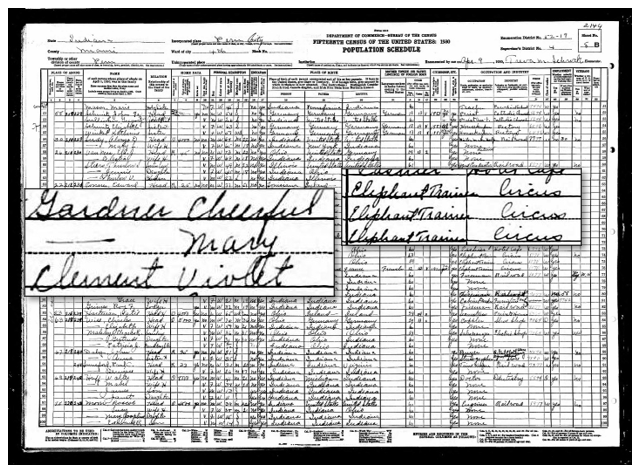 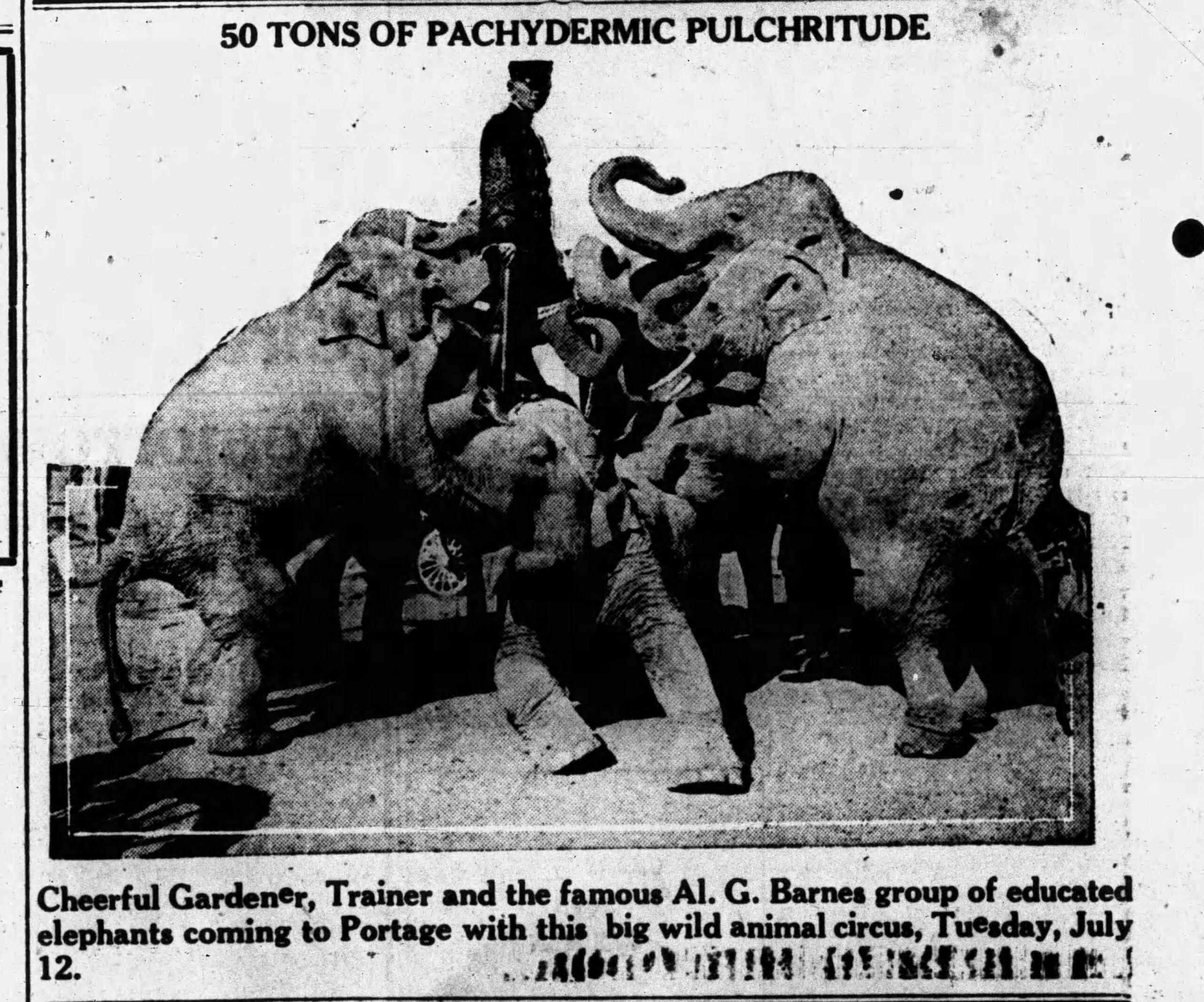 Here are some other interesting Indiana occupations from U.S. census records: 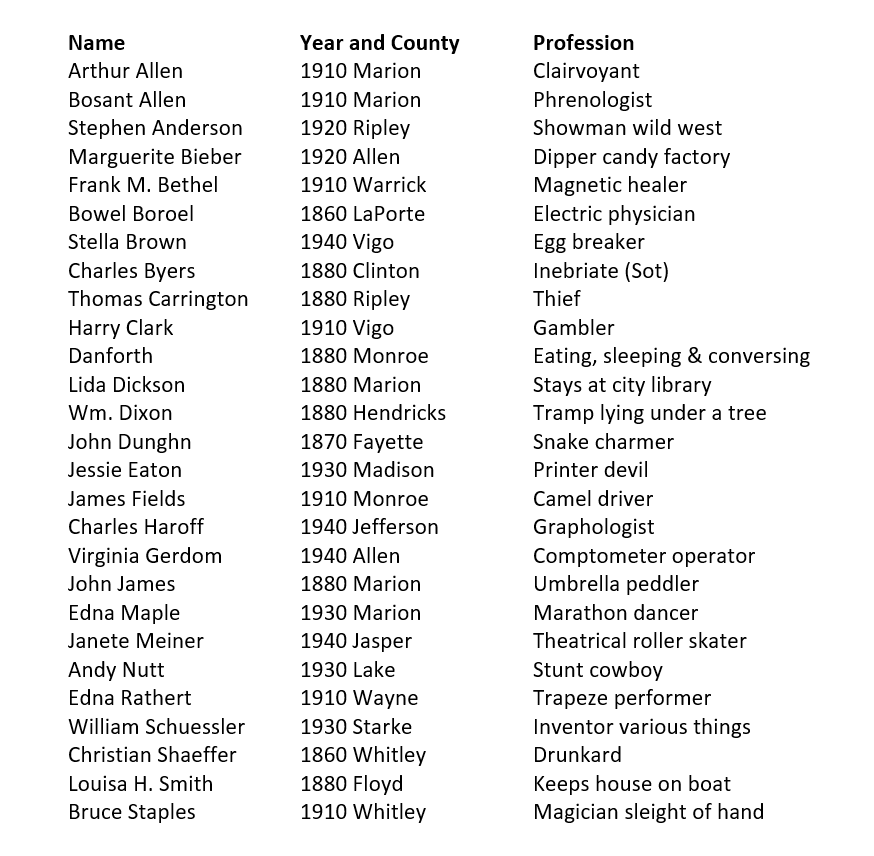 U.S. census records are available through these online resources:

In addition, the library has a guide to the Genealogy Division’s Census Collections by State if you prefer to see what the library has in other formats, such as print or microfilm. You never know, you may learn you have an acrobat, clairvoyant or other remarkable profession in your own family tree!

This blog post is by Dagny Villegas, Genealogy Division librarian.