The city of Indianapolis is about to turn 200 years old and the Indianapolis Bicentennial Commission is planning a celebration which will begin in June 2020 and last through May 2021. Those planning to celebrate can check the commission’s website for announcements, contests, events and a list of commission members. Since the Indiana State Library is continually adding materials to its online collections, now seems like a great time to check the collections for information about Indianapolis in order to gear up for the forthcoming festivities.

The Indiana Historical Legislative Documents collection contains the earliest volumes of the Indiana Acts. The volumes have an index to help locate specific laws passed in a year by the General Assembly. In this case, browsing the index and noticing “Seat of Government” points toward Indiana Acts 1820, Chapter 10, “An Act appointing Commissioners to select, and locate a site for the permanent seat of government of Indiana,” which was approved Jan. 11, 1820, and would move the state capitol from Corydon to a new location to be determined. 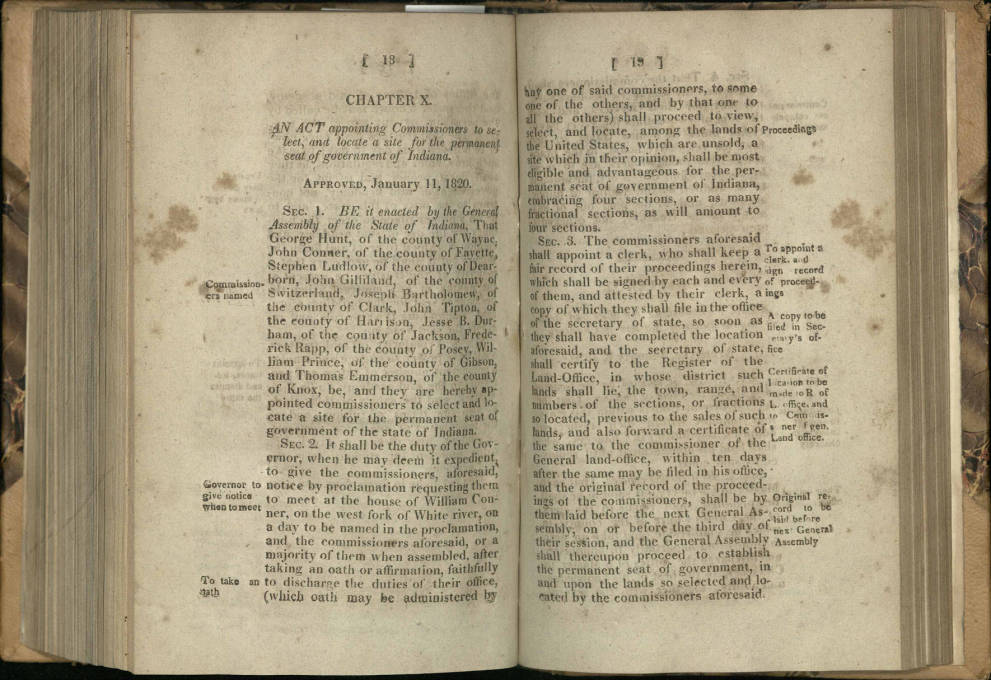 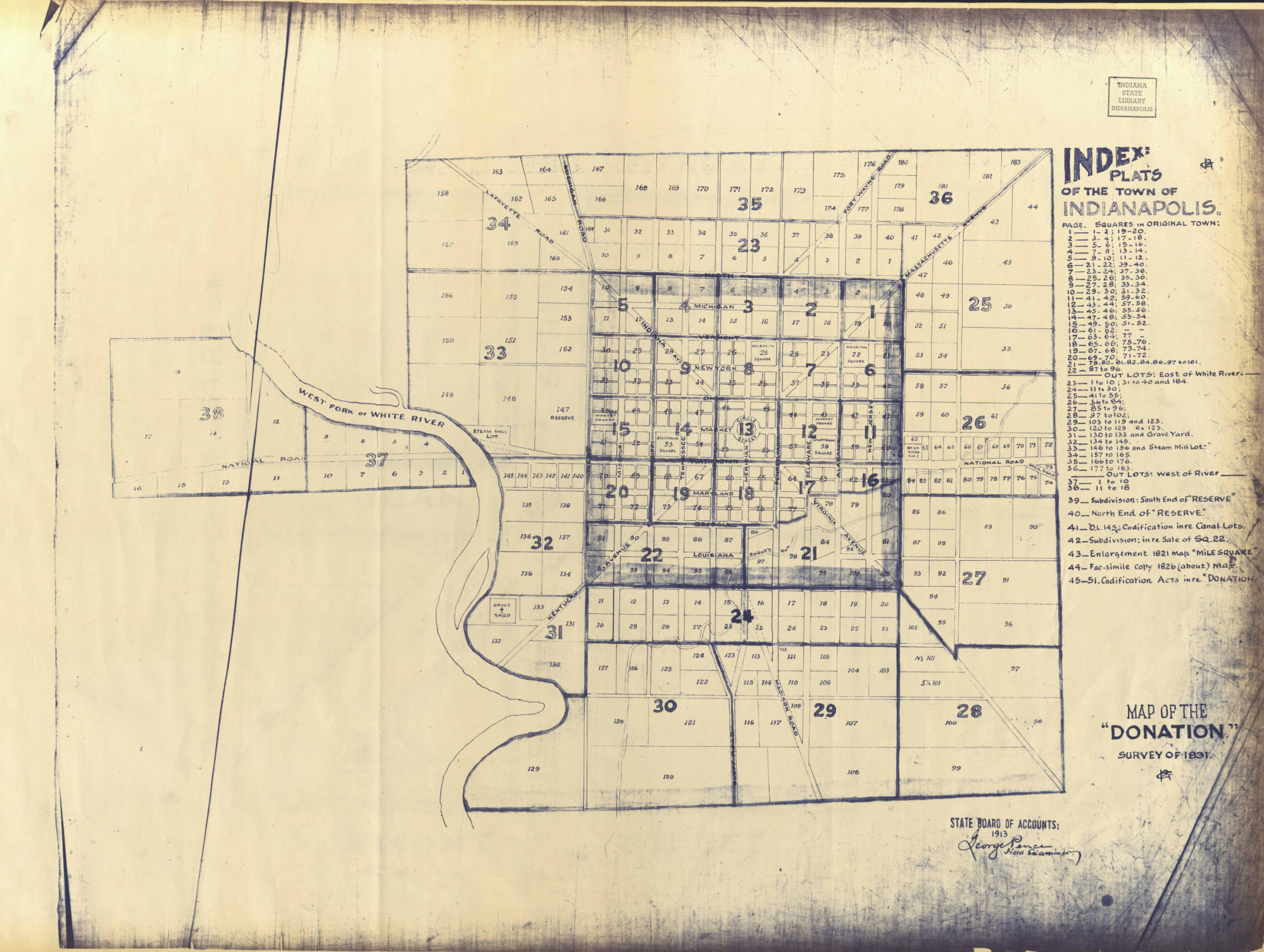 Indiana State Library Map Collection contains a digital copy of Plats of the town of Indianapolis, which shows maps of the downtown Indianapolis mile-square donation lands with the names of the first patentees. It includes a comprehensive list of Indiana laws from 1821 to 1913 related to the lots and out-lots. The Indiana Archives and Records Administration has additional details about the Indianapolis Donation and the official state land records held there.

The Indiana Documentary Editions collection contains the Messages and papers of Jonathan Jennings, Ratliff Boon, William Hendricks, 1816-1825. Jonathan Jennings was the governor at the time and issued a proclamation calling for the commissioners to meet in 1820 to select a site for the new capitol. John Tipton was one of those commissioners. The book “John Tipton papers. Volume I: 1809-1827” includes the transcript of the journal Tipton kept during the May 17-June 11, 1820 expedition. Here’s a bonus: the Rare Books and Manuscripts online John Tipton Collection contains digital copies of Tipton’s 1820 journal in his own handwriting.

There is a wealth of information not only in the Indiana State Library’s physical collections, but also in the ever-growing online digital collections. As the Indianapolis Bicentennial approaches, more online materials about the history of the city could show up. Keep searching!

On Thursday, June 30, 2017, the Indiana Bicentennial Commission met for the final time at the Indiana State Library. The commission, which included former First Lady Karen Pence and former Lt. Governor Becky Skillman, who served as co-chair, set “the direction of the planning and funding of a strategic plan to implement a cost-effective, inclusive [and] realistic celebration of Indiana’s 2016 bicentennial.” Started under the guidance of former governor Mitch Daniels in 2012, the commission worked for five years planning and implementing the state’s bicentennial celebration. Executive Director Perry Hammock detailed one such endeavor. The statewide Bison-tennial Public Art Project, which was sponsored by the United Way, aimed at placing five-foot-tall fiberglass bison in every county in the state. Even though a small handful of counties did not display a sponsored bison, the art project was a rousing success. When Indiana turned 200 on Dec. 16, 2016, the Bicentennial Commission had carried out several major events and completed many major celebratory projects, such as the construction of the Bicentennial Plaza outside of the statehouse, the building of Statehouse Education Center in the Indiana State Library and the execution of the torch relay, which saw a bicentennial torch carried through all 92 of Indiana’s counties. Even though the commission has disbanded after a very successful five years, the Indiana State Library is still seeking materials related to Indiana’s bicentennial for archival purposes. Individuals or organizations with such materials may contact Bethany Fiechter of the Rare Books & Manuscripts Division at the state library. Ryan Brown has been Communications Director at the Indiana State Library since November 10, 2014. February 24, 2016, will be his last day at the library. In this State Library exclusive, Ryan Brown interviews Ryan Brown. Let the fun and confusion begin.

RB: You have been at the Indiana State Library for over a year. What are a few of the highlights of your tenure?

RB: I’m glad that you asked. There have been many interesting projects I have worked on over the past year such as the new brochures, door coverings, banners, annual report, etc. One of my favorite partnerships that I developed was with the Indiana Department of Education. We shared a booth together at the Indiana State Fair last summer and distributed information about the services available at the library to thousands of Hoosiers from all over Indiana. It was great to get out into the community and tell people face-to-face about the awesome collections at the library, as well as our statewide services. RB: What are some of those collections and services?

RB: The Indiana State Library has one of the largest genealogy collections in the Midwest. It also has a huge inventory of rare books and manuscripts, government documents, newspapers, large print books, as well as talking books and Braille. There are also many online services available to Indiana residents like INSPIRE.in.gov, Indiana Memory and Hoosier State Chronicles. All of these items and services are free to Indiana residents. If you have any questions about the collection or services, you can Ask-a-Librarian.

RB: We are starting to sound like a commercial.

RB: Anyway…it seems like a year is not a long time to be at a job, why leave so soon?

RB: The main reason I took a new job was so I could eventually move to South Bend where my wife is originally from.

RB: Yes. You are probably thinking, “It’s cold up there and you are not a Notre Dame fan, so why would you want to move to South Bend?”

RB: Do you remember a few years back when you promised your wife that when you were ready to have children the two of you would make an effort to move to that area? RB: Oh yeah, what was I thinking? [Chuckling]

RB: Wait a second; am I going to be a father soon?

RB: Not at the moment, but you were going to start trying.

RB: I would say overall that I have enjoyed my time here at the State Library. There are a lot of great people on staff and working here allowed me to practice many of the skills I learned at school. Plus, we had many accomplishments in that short time period. We saw significant increases in event attendance as well as use of our services like INSPIRE.in.gov.

RB: What are some of the challenges you faced at the library?

RB: One of the biggest challenges was getting the media interested in what goes on at the State Library. Though, we did have a ton of press about our partnership with the Indiana Department of Natural Resources.

RB: The State Library acquired State Park passes from the Indiana Department of Natural Resources that are available at local libraries so patrons may check them out. The program started in January and has been very popular amongst patrons and the media. Anyone interested in the park passes should contact their local library for more information.

RB: What is your favorite item or part of the Indiana State Library?

RB: That is a difficult question that you always ask people in interviews. I guess if I had to narrow it down to one item, it would be the original State Flag. I believe that the Indiana Historical Bureau will be taking the flag around the state to various locations this year for the bicentennial. RB: Bicentennial? What is that?

RB: Oh yeah? What is the library doing to celebrate?

RB: The library has a bunch of projects it is involved with including the new Indiana Young Readers Center, Hoosier State Chronicles, Bicentennial Toolkits for Libraries, Bicentennial Manuscript Collection, and many more!

RB: Thank you for taking a few moments of your day and participating in this interview. It has been a pleasure speaking with you. Since Wednesday is your last day, how would someone contact the library if they need info about the Wednesday Word or any communications questions?

RB: It has been great interviewing with you Ryan. If you are a librarian or library needing to reach the communications department, please email the State Library at communications@library.in.gov.