Book inscriptions are a common find among the thousands of volumes held by the Indiana State Library. Some are mundane: An author’s hastily scribbled signature dedicated to a fan or a generic holiday greeting from the previous owner’s grandmother. Others are more intriguing and can lead a researcher down some interesting paths. Within a collection of books by Hoosier author Meredith Nicholson are five bearing inscriptions to a certain Charles Romm, Esq. A few of these books also have typed letters from Nicholson directed to Romm at an address in New York City pasted within the inside cover. So who exactly was Charles Romm?

A quick internet search led to the book “Thieves of Book Row: New York’s Most Notorious Rare Book Ring and the Man Who Stopped It” by Travis McDade (ISLM Z1029.M33 2013).1 The answer, in short, is that Charles Romm was a prominent New York bookseller who specialized in rare and valuable editions, while at the same time helming a wide-reaching gang of book thieves who plundered libraries of their literary treasures, which he later sold to his customers.

While it is impossible to ascertain that the Charles Romm referenced in the Nicholson inscriptions and correspondence is the same Romm described in McDade’s book, it seems highly likely that both men are the same person. Romm’s New York bookstore was located at 110 4th Ave. The address Nicholson sent his correspondence to was 224 E. 12th St., a mere two blocks away. Moreover, some of the correspondence speaks of publishing and other literary concerns, indicating that Romm was somehow involved in the business of books and not merely a fan. It is unlikely that Nicholson, who was a best-selling author in the early 20th century, knew anything of Romm’s more underhanded dealings and merely assumed he was corresponding with one of New York’s most preeminent booksellers. 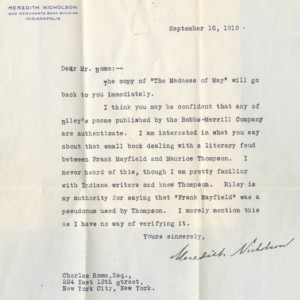 Letter from Nicholson pasted inside the cover of “The Madness of May.” The Mayfield-Thompson feud is also mentioned in a biography of James Whitcomb Riley.2 Riley publicly accused the poet Mayfield of plagiarizing fellow Hoosier author Thompson. However, another source3 indicates that Frank Mayfield was a pseudonym used by Daniel W. Starnes and not, as Nicholson states, by Thompson himself.

The more unsavory side to Romm’s business is as fascinating as it is upsetting. His book theft “gang” consisted of men who would go to public libraries and universities, pose as patrons or students and either steal books directly from the shelves or borrow them and never return them. According to McDade, “There was no collection of books too small to escape the attention of the gang. From archives to athaneaeums, from local libraries to historical societies, the men in the ring scouted, indexed and pilfered them all.”1 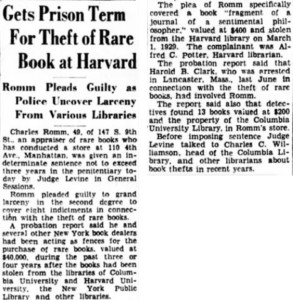 Many libraries attempted to counter this type of theft by moving their more valuable items to closed stacks and non-circulating collections. However, this only caused Romm’s thieves to pivot operations and they managed to continue their thefts through careful observation of libraries, librarians and security systems. Eventually, the law caught up with Romm and in November of 1931 he was indicted on grand larceny charges. He ultimately ended up serving a little over a year in New York’s notorious Sing Sing prison before dying a couple of years after his release.1 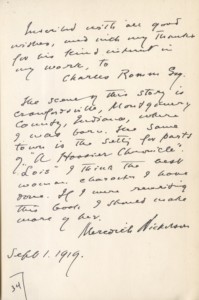 Inscription from Otherwise Phyllis (1919). “Inscribed with all good wishes, and with my thanks for his kind interest in my work, to Charles Romm, Esq.”

It is unknown why Nicholson inscribed so many books to Romm. Perhaps Romm truly was a fan of Nicholson’s work. Or perhaps – and this seems more likely – he sought inscriptions on first editions to make them more desirable for his customers. Whatever the reason, it seems remarkable that this small set of books all bearing inscriptions to Romm has managed to stay together for almost a century, making their way from Nicholson in Indianapolis to Romm in New York and somehow making the trek  back again to Indianapolis, ultimately to reside in the Indiana State Library.

3 thoughts on “Romm and Nicholson: The book thief and the Hoosier author”