There is no shortage of poetry in the collections of the Indiana State Library, from published works to ephemeral poems, many tucked away in letters or scrapbooks. This is a look into pieces left by the amateur poets of Indiana – every day Hoosiers creating with language based on their lives, loves and experiences.

Many of the poems within the Manuscripts Division exist as collections unto themselves. They are often a single poem with little information about their creation or author. This further lends to the idea that they existed solely as a personal exercise for their creator or perhaps a gift to someone. The themes represented in a selection of the poems in the Manuscripts Division are some of the most quintessential in poetry: love and relationships, war and loss. These are all topics that have driven humans to create songs, ballads and other forms of poetry throughout history.

The following two poems are examples of themes on love and relationships – mostly the complicated variety. They are both anonymous. “Song of a Fellow” is signed by “Eva” and tells of an unimpressive suitor who failed to woo her. “The Reconcilement” is about the ups and downs in a marriage. Both poems are also written on small scraps of paper. 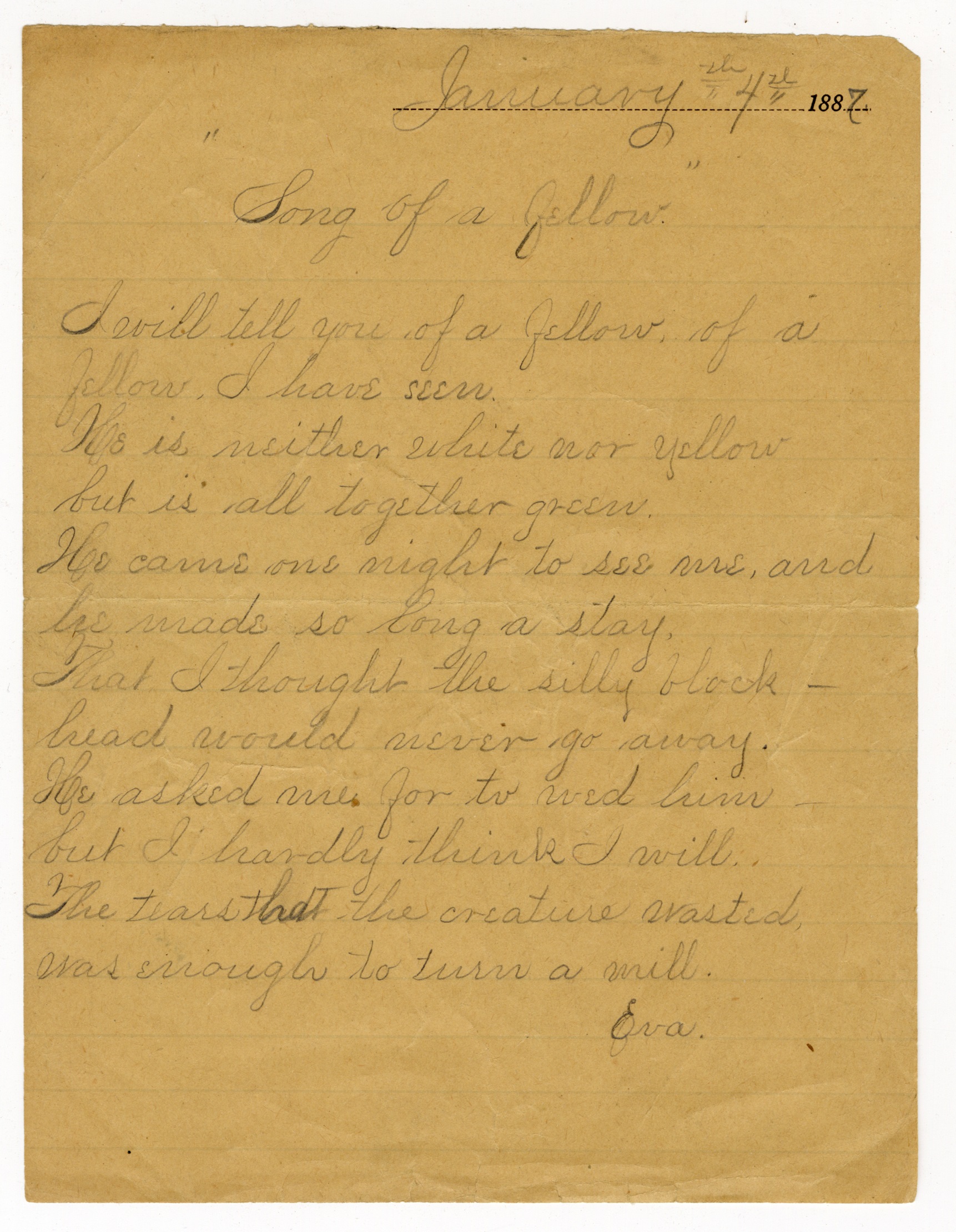 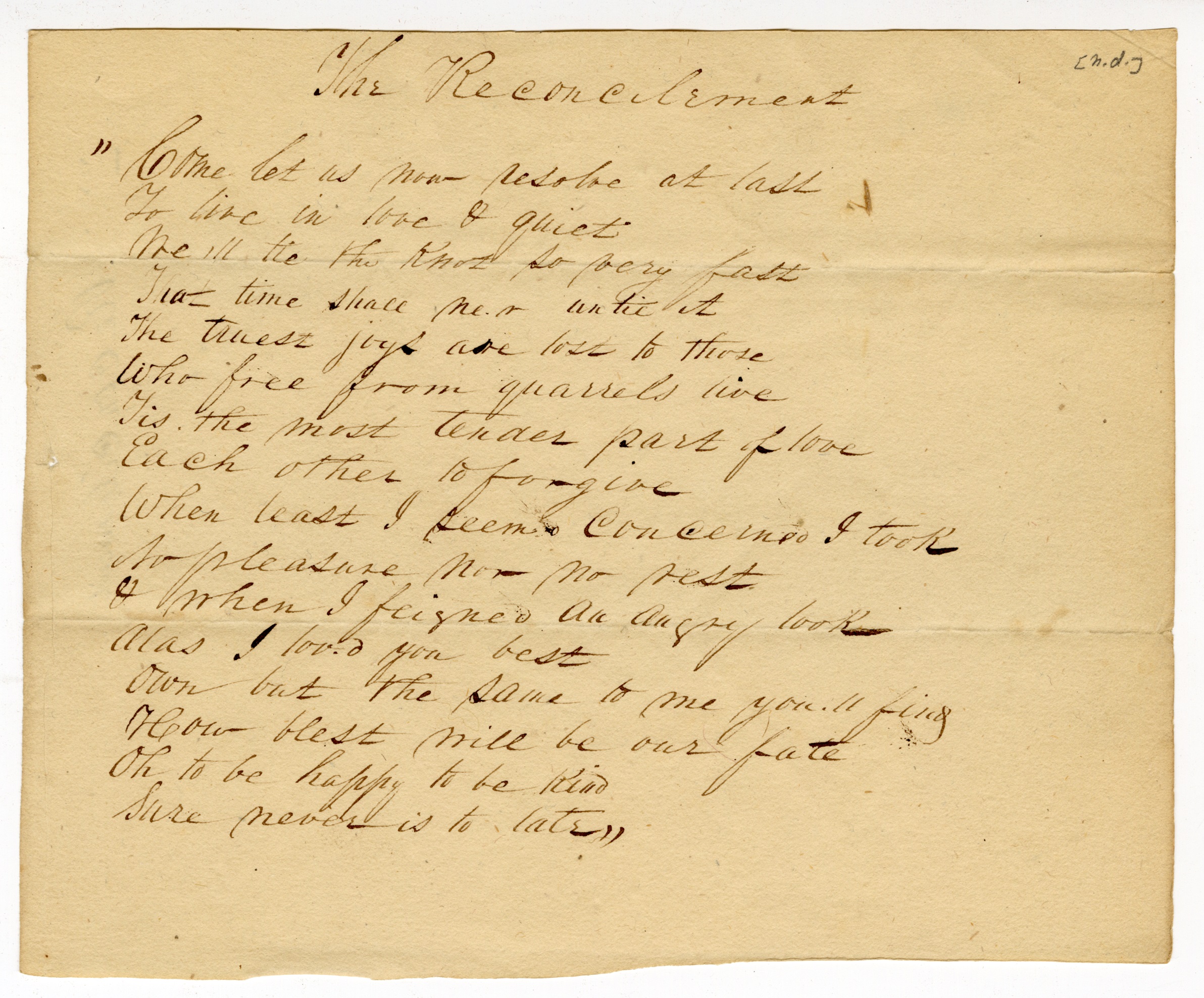 “The Watchmen of Dover” is a poem about England in World War II by Wilbur Sheron of Marion, Indiana. Sheron’s biography indicates he wrote a number of poems. It’s likely that this may have been intended for other readership as he lists himself as the author as well as his contact information. 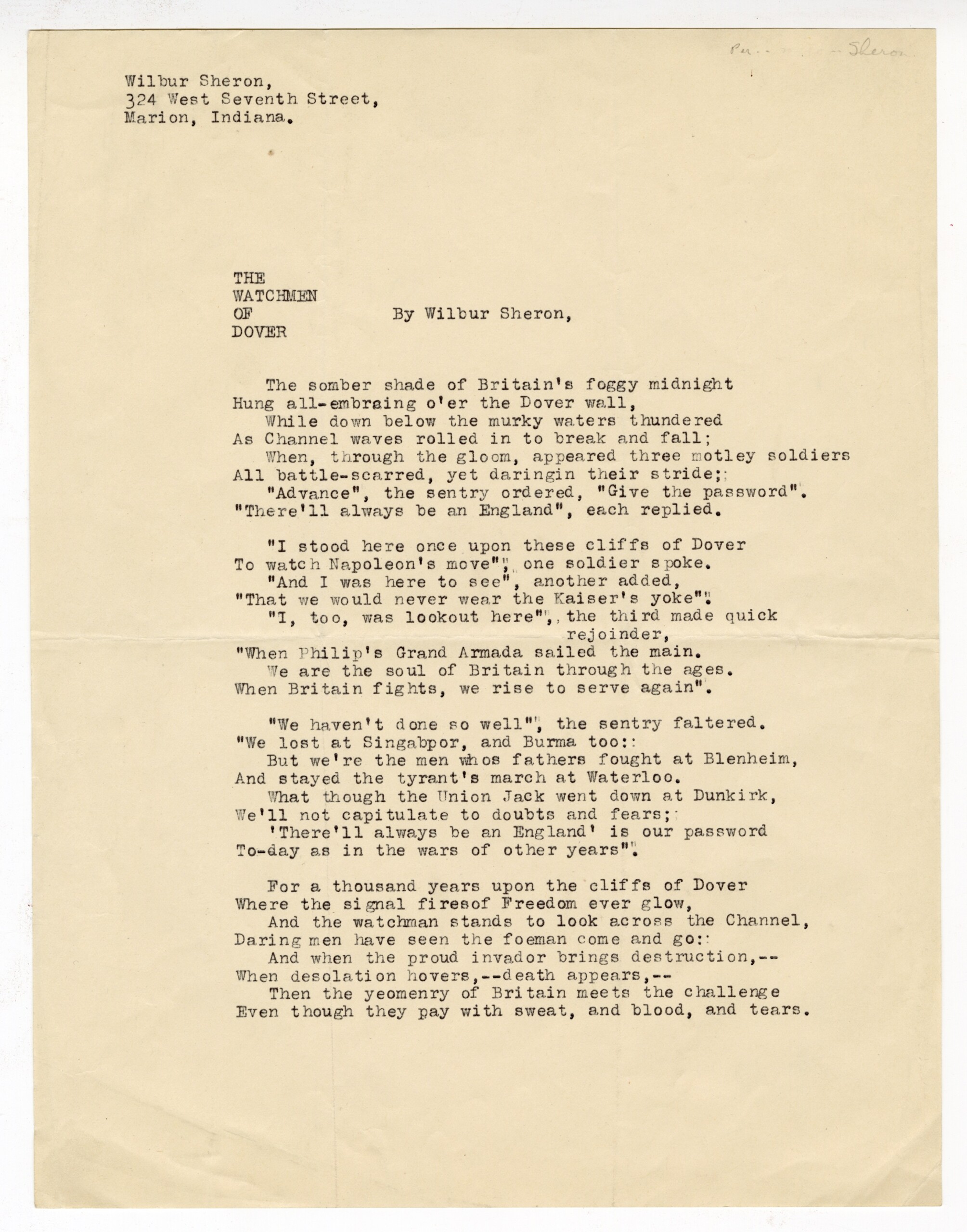 “At Early Candlelight” tells the tale of an older man reminiscing in the early evening about his lost family and how he will meet them in heaven. It is on two small scraps of paper, but is also entitled and signed by the author, Robert McIntyre. No information is available about him. 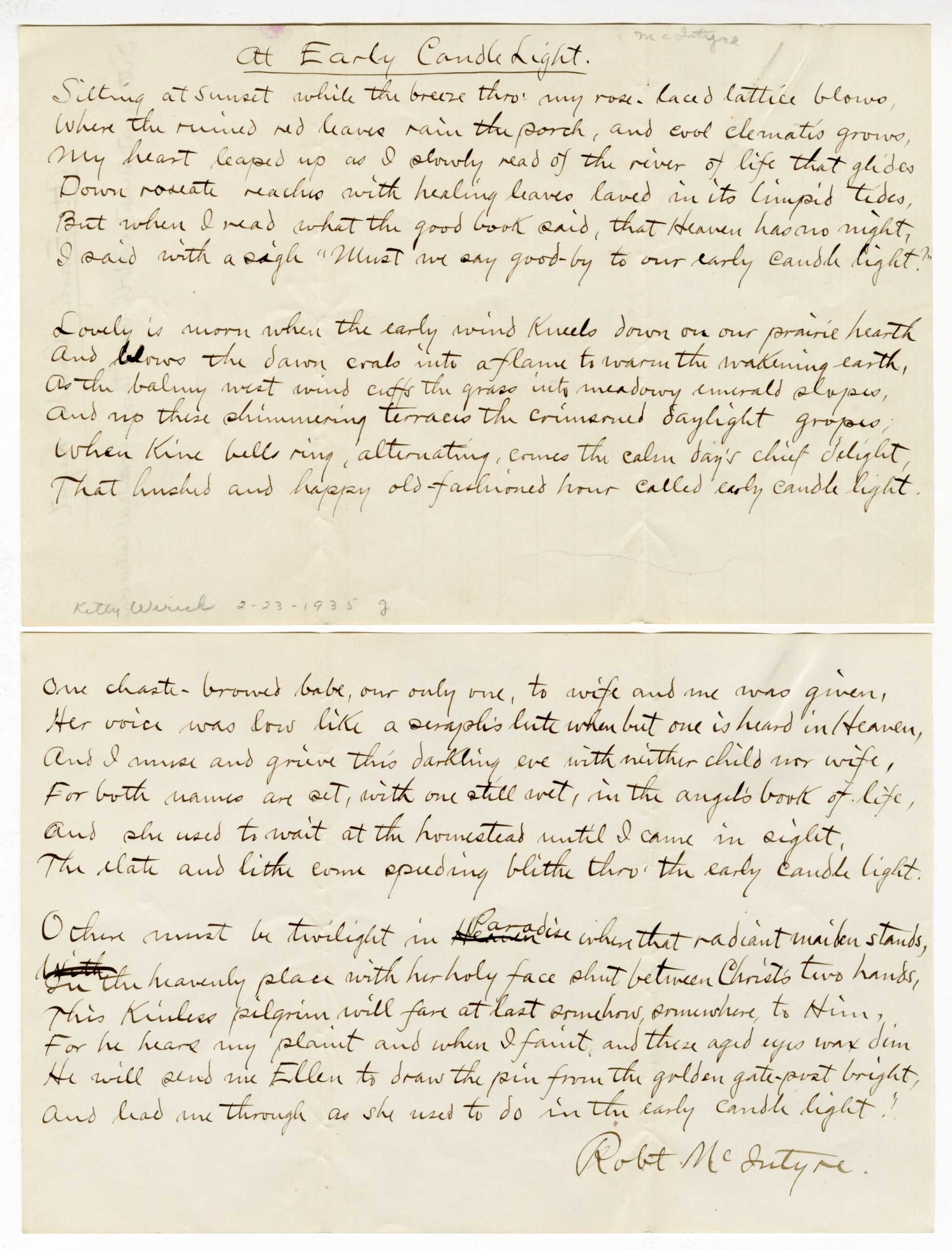 This next poem was found in the scrapbook of Caroline Furbay, saved from her friend Charles William Alber, both also from Marion, Indiana. What a pleasant way to say, “It’s the thought that counts!” 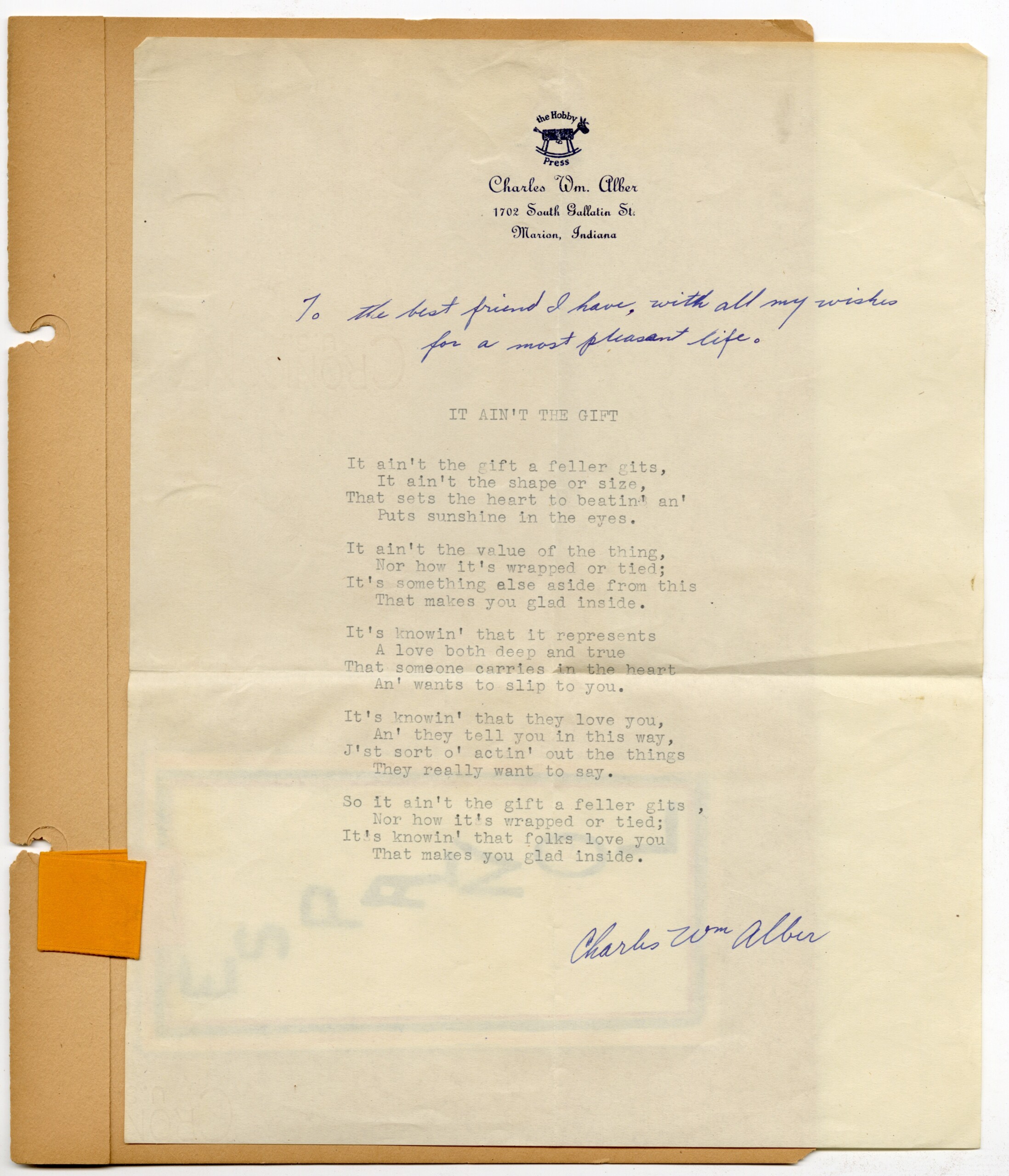 Poets have formed groups in Indiana to share their work, such as the Poetry Society of Indiana, first formed as the Indiana State Federation of Poetry Clubs in 1941. The Manuscripts Division holds collections from some of these groups and the writers involved, such as the aforementioned club and the Poets’ Study Club of Terre Haute. The INverse Poetry Archive is also part of the Manuscripts Collection and collects poems submitted by Hoosiers on an annual basis.