When Indiana was established as a state in 1816, its very first constitution explicitly banned slavery. Decades later, attitudes had soured. While many white Hoosiers disavowed the institution of slavery, they did not necessarily want populations of free blacks living in the state. Thus, when citizens convened for a constitutional convention in 1850, this issue was hotly debated. Many delegates, all of whom were white, expressed concern at the influx of blacks migrating to the state, particularly from southern slave states. The result was Article 13 in the 1851 Indiana Constitution which declared “No negro or mulatto shall come into or settle in the State, after the adoption of this Constitution.” A further stipulation of this exclusionary act “instructed the county clerks to notify all Negroes who were residents before November 1, 1851 to register, ordered the creation of the register of negroes and mulattoes, and empowered the clerks to subpoena witnesses and to issue certificates attesting to the registration of legal residents.”1 In addition to name, age and place of birth, these registers also listed physical descriptions of each settler. The registration certificates served as proof that the bearer was a citizen of Indiana and therefore allowed to be in the state legally, but it’s impossible to ignore that the creation of these registers served as further persecution against an already marginalized group, making them even more vulnerable in a country that was bitterly divided over the issue of slavery. 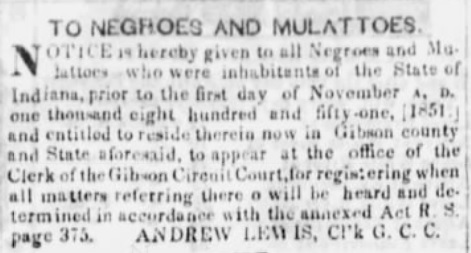 Notice alerting Gibson County citizens of the registration requirement. From the Princeton Clarion-Leader (Princeton, Indiana), May 14, 1853

On Aug. 23, 1853, two settlers named Nelson and Gilly Ann Perry registered with Andrew Lewis, the county clerk of Gibson County, and received their official registration certificates. These documents are now in the Indiana State Library’s Rare Books and Manuscripts collection. According to the papers, Nelson was 33 years old, slightly over 6 feet tall, of stout build and dark complexion and was born in Pennsylvania. Gilly Ann was 28 years old, 5 feet 6 inches tall, of light build and light complexion. She was born in North Carolina. 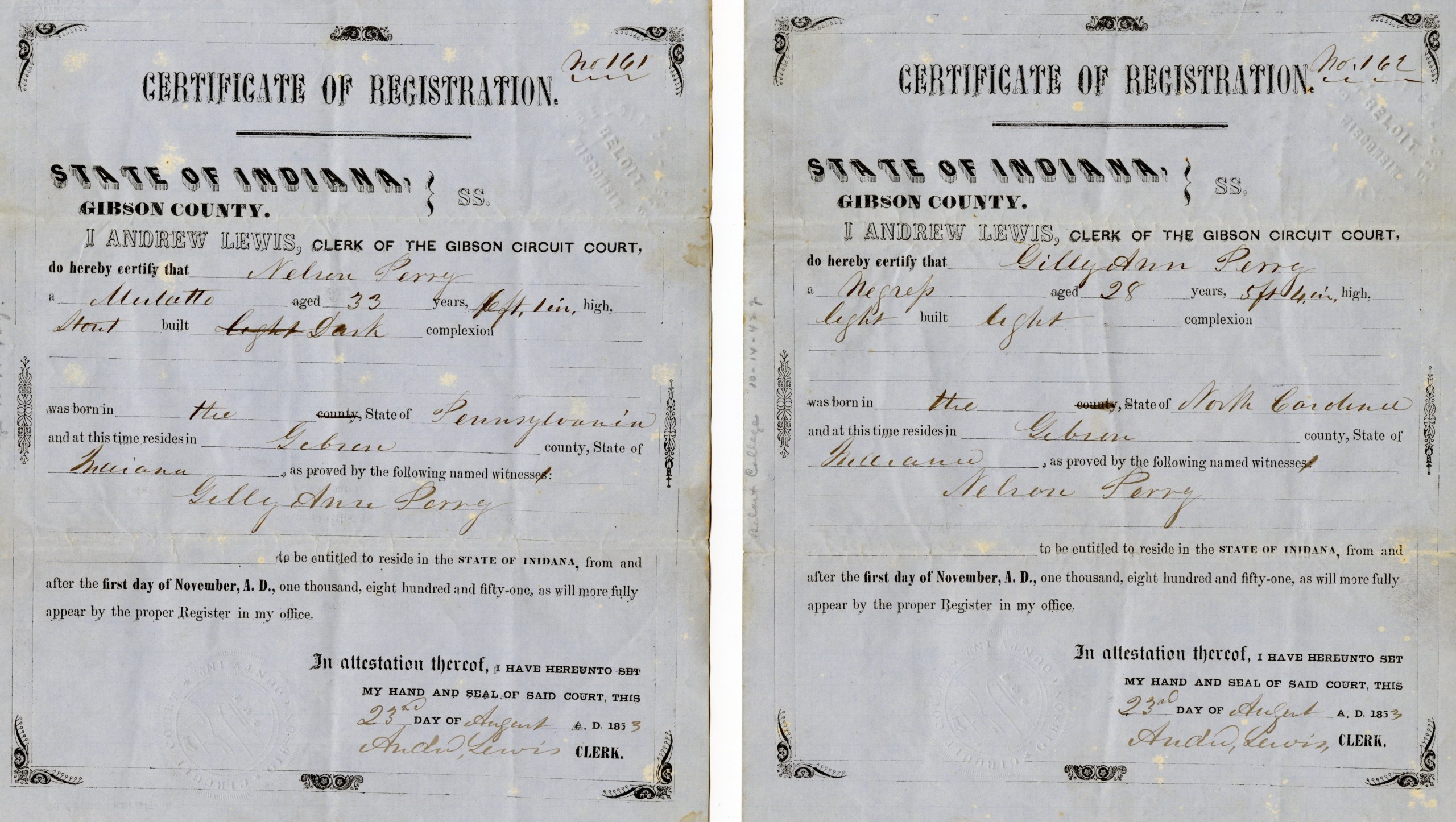 Not much is known about Nelson and Gilly Ann, but some of their life together can be reconstructed from public records.

Years before they were required to register as free blacks, they were entered in another official Indiana registry, albeit for a more innocuous and mundane reason: On July 26, 1848 they were married in Posey County. According to the official registry, Gilly Ann’s maiden name was Eddy.

A couple of years later, they appear in the 1850 Census living in Mount Vernon in Posey County, Indiana. Nelson’s occupation is listed as a “cooper” which is a person who made wooden barrels and tubs. They also are living with a 50-year-old black female named C. McCalister,  but no further information could be found on her. Unfortunately, it is very probable that if she registered as a free black in Indiana, it was in Posey County and that registry is known to be missing.

On Jan. 4, 1864, Nelson Perry enrolled in the United States 28th Colored Infantry Regiment, Company D. By this stage of his life, Perry was in his 40s but still willing to serve for the Union cause. A note on his military record indicated he had been “absent sick in hospital at New Orleans, LA since 7/15/65.” He was officially discharged on Nov. 8, 1865.

Later, Nelson’s name shows up in miscellaneous military paperwork including a list of Union Civil War veterans who were given official government-provided headstones.

No date can be found for his death. Presumably, he died prior to 1894 since that is the date on the headstone application. He is buried in Princeton, Indiana in Gibson County.

Gilly Ann is largely unaccounted for during the Civil War years and there is no evidence that she and Nelson had children. She shows up again in public records in the 1875 Wisconsin State Census, living in Beloit, Rock County near the Illinois border. She also appears in the 1890 United States Census of soldiers and widows, again in Beloit. 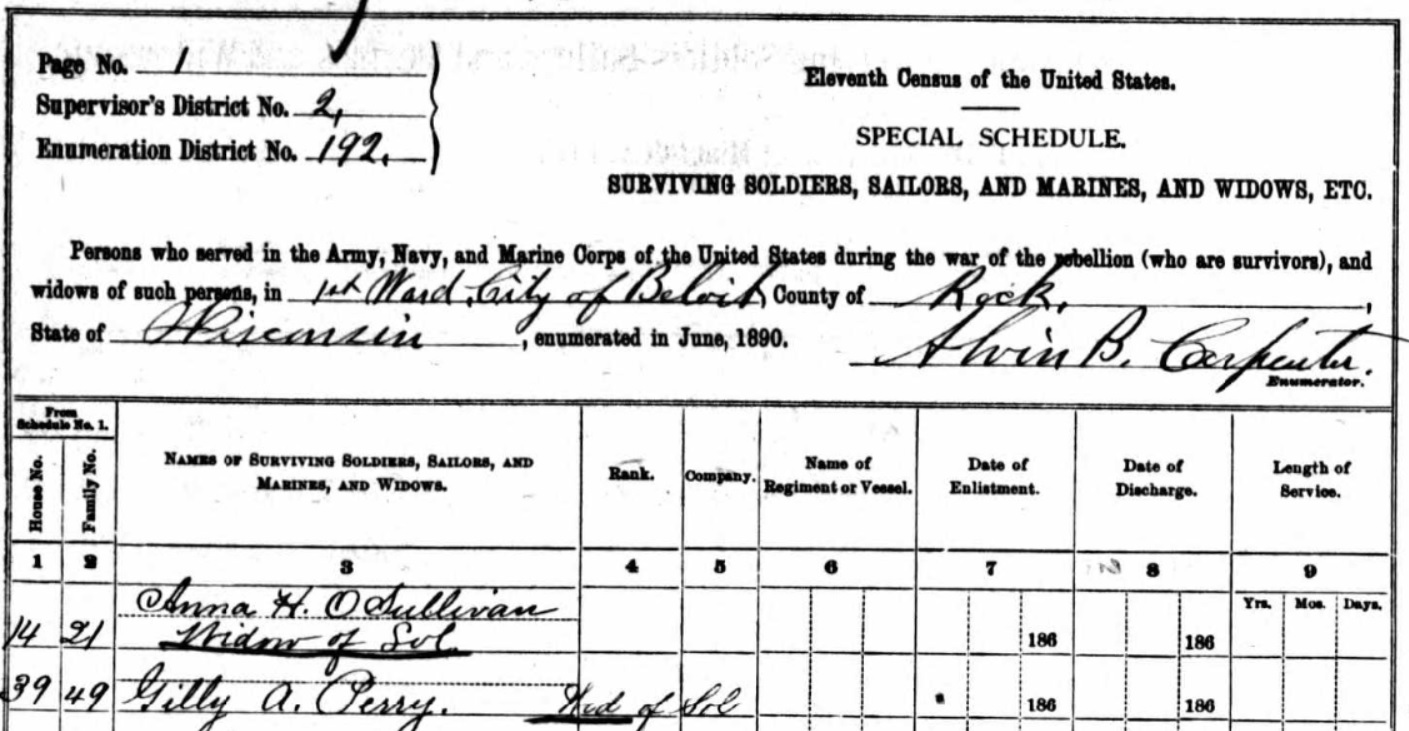 Interestingly, the Indiana State Library was given both Nelson and Gilly Ann’s Indiana registration papers from Beloit College where, presumably, Gilly Ann had donated them for posterity.

Official documents provide merely a rough outline of the lives of Nelson and Gilly Ann. What we know about Indiana history during the antebellum era can help flesh out their story even if, ultimately, any conclusions we draw are pure conjecture. For example, we know from her registration papers that Gilly Ann was born in North Carolina. Many free blacks and former slaves migrated to Indiana from North Carolina with assistance of North Carolina’s Quaker community. Quaker led caravans – sometimes made up of hundreds of people – made the long trek west. Migrating in such a manner was a safer alternative to escaping through other means, such as the Underground Railroad, because travelers were under the protection of their Quaker traveling companions. When the caravans reached Indiana, the free blacks would either continue to head further north to Michigan or Canada or they settled in Indiana, often within or near Quaker communities. It is quite possible that Gilly Ann was brought to Indiana from North Carolina in such a caravan.

In 1848 and 1850 we know that both Nelson and Gilly Ann were in Posey County. Based on the 1850 census, we know they were living in Mount Vernon, Indiana, a town situated directly on the Ohio River with Kentucky – a slave state – nearby on the other side of the river. In September of that year, the United States Congress passed the Fugitive Slave Act of 1850 which further compromised the rights of free blacks in northern states and made them more susceptible to kidnapping and being sold off to southern slave owners, even if they had never been enslaved before in their life. Being situated on the Ohio River, Nelson and Gilly Ann’s home was located in an especially perilous place as bounty hunters constantly roamed the area surrounding the river looking for escaped slaves or others who they could bring in for a financial reward. Bounty hunters could abduct people suspected of being runaway slaves with little or no evidence.

Living so close to the Ohio River, it is entirely possible that the Perrys were involved in the Underground Railroad to some degree and like many other free blacks were instrumental in assisting others on their journey north. However, in 1853 the couple had moved a bit north to Gibson County. Perhaps they wanted to get farther away from the Kentucky border. Or perhaps they made the move because Gibson County was home to a larger number of free blacks and had several established black rural settlements. According to the 1850 census, Posey County’s black population was 98 while Gibson County’s was 217, almost double the size. Whatever the reason, it seems to have been a permanent relocation since we do know that Nelson Perry eventually ended up being buried near Princeton, a town located in Gibson County.

While all this is merely speculation, contextualizing what little is known about Nelson and Gilly Ann from public records within the broader narrative of general U.S. history allows for a richer and more complete story to emerge. That these registration papers were saved for decades, journeyed from Indiana to Wisconsin and were left in the care of a local college only to make their way back to Indiana is remarkable and a testament that Nelson and Gilly Ann must have wished their story to be remembered.

The Indiana State Library has numerous resources documenting this period of Indiana history. Some used for this blog post are: