Dr. E.J. Josey was a librarian, activist, professor and the founder of the Black Caucus of the American Library Association.

Born in 1924, Josey grew up in Portsmouth, Virginia. He received his undergraduate education at Howard University in Washington, D.C. He then went on to earn a master’s degree in history from Columbia University. Josey later earned his master’s in library science at the State University of New York in Albany, New York.

Josey held several librarian positions in New York, Delaware, and Georgia. He was very active in the civil rights movement and was a member of the National Association for the Advancement of Colored People. He authored a resolution during the 1964 American Library Association Conference forbidding the organization’s staff and officials from participating in state library associations that discriminated against African-American librarians. This action led to the desegregation of library associations across the Southern United States. In addition, Josey became the Georgia Library Association’s first African-American member.

In 1970, Josey founded the Black Caucus of the American Librarian Association during the ALA Midwinter Conference. He was the association’s first president, serving from 1970 to 1971. He also served as president of the ALA from 1984-85. In addition, Josey was a library science professor at the University of Pittsburgh from 1986 to 1995.

Josey authored numerous articles and books during his lifetime. The Indiana State Library has several of his books in its collection: 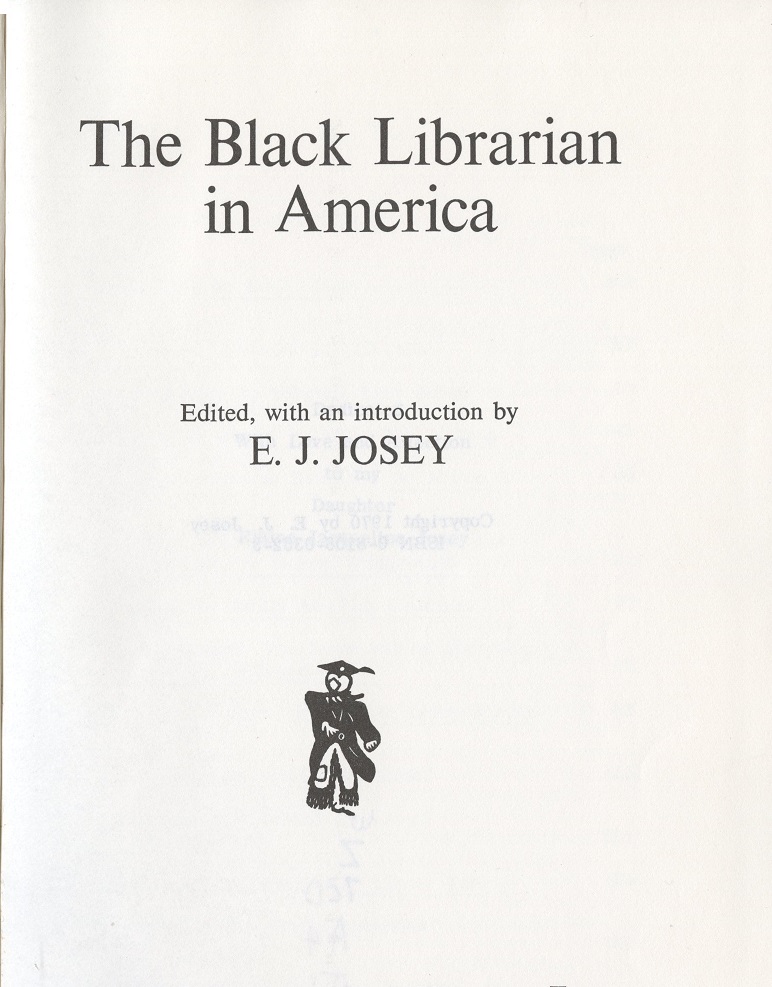 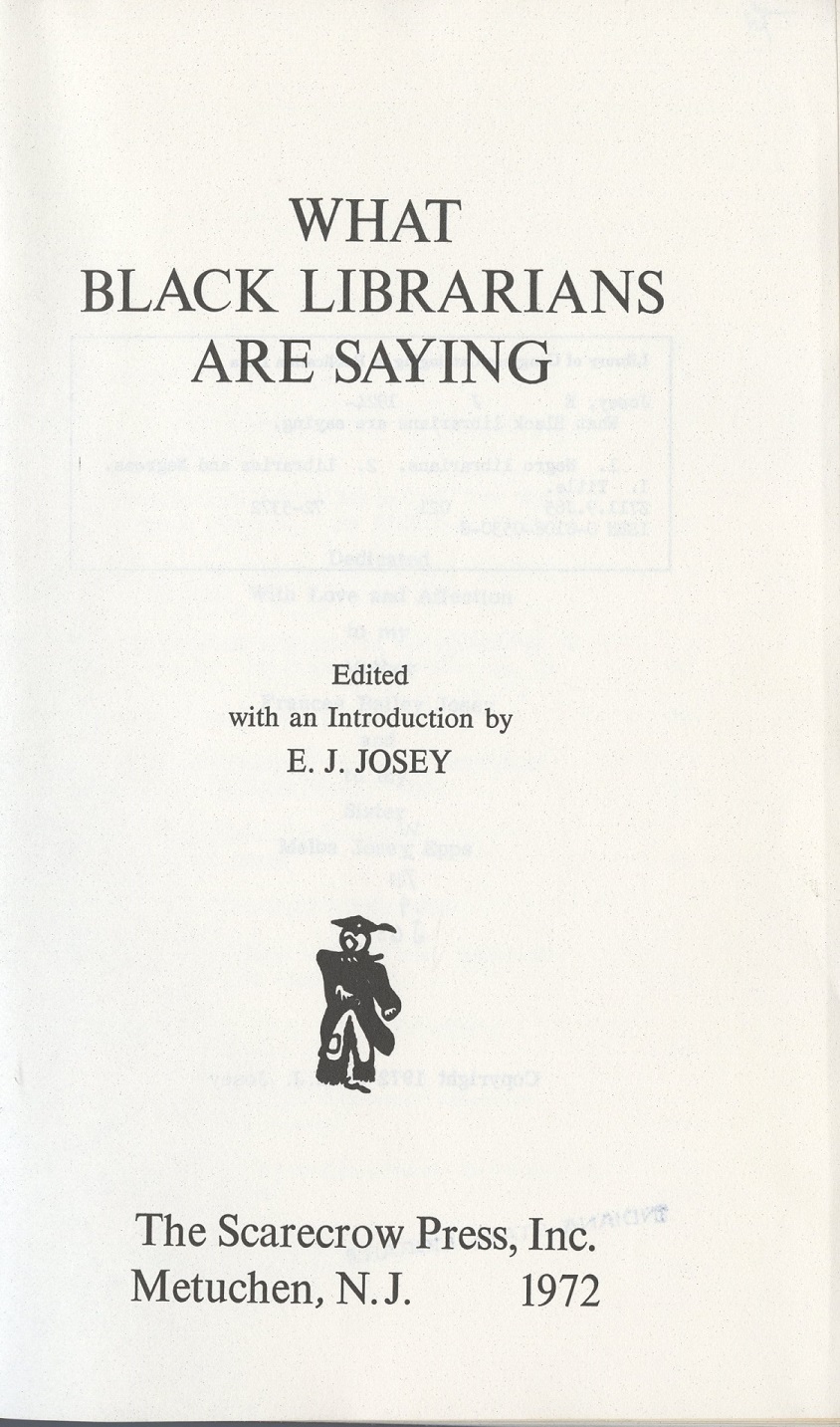 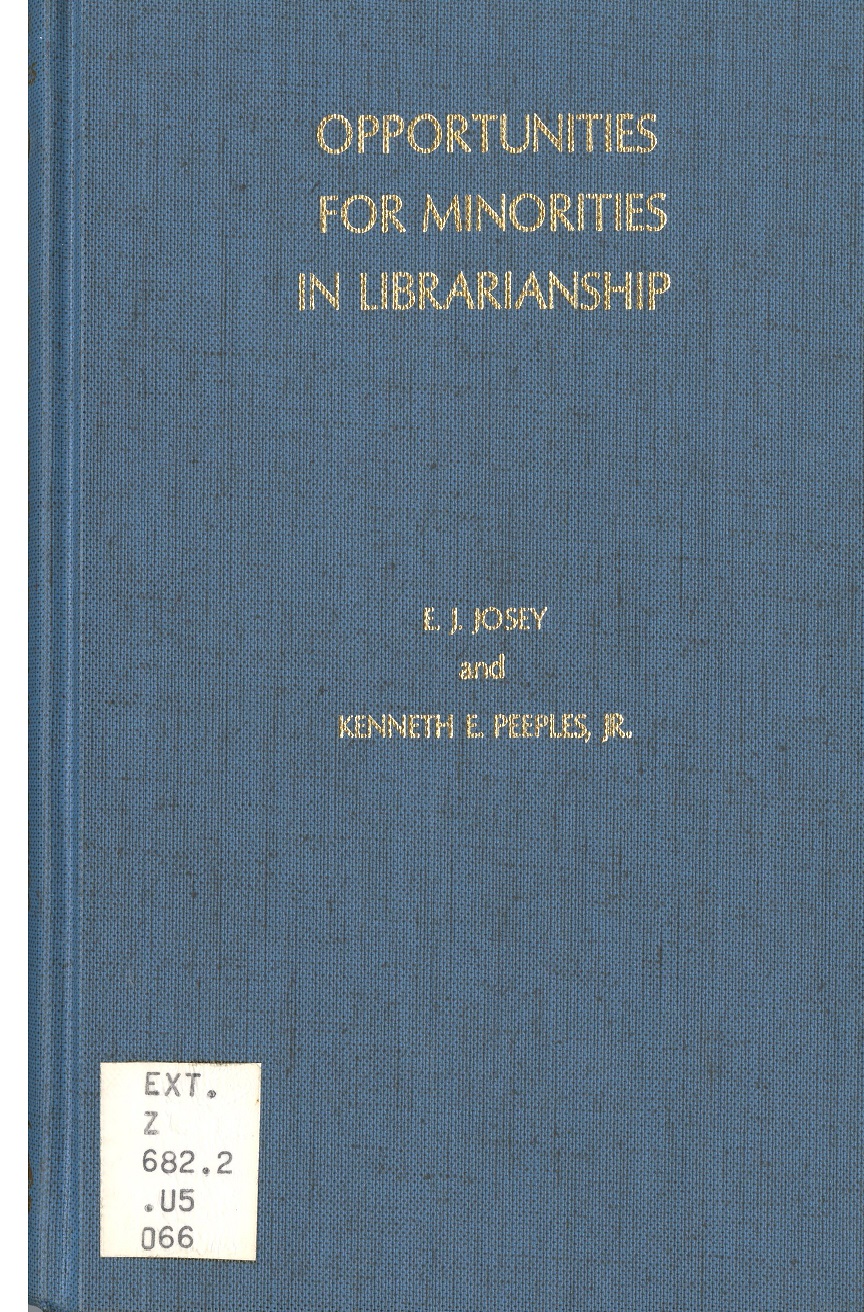 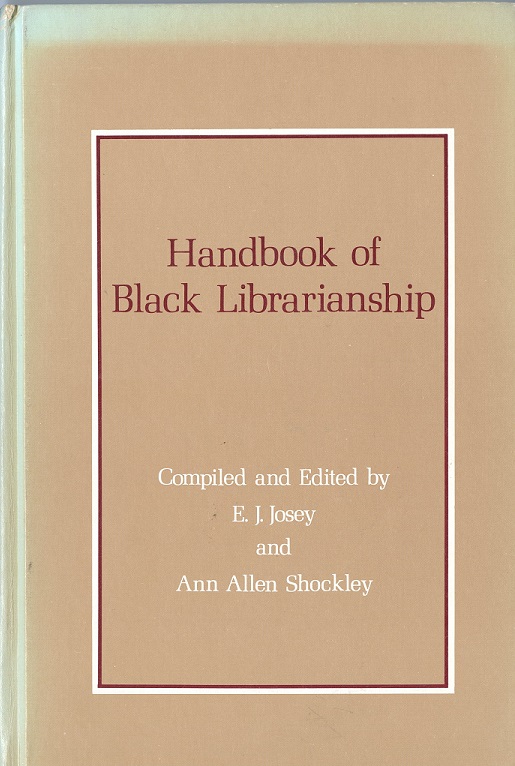 In April of 1998, Josey delivered an address at the National Sankofa Council on Educating Black Children Conference in Merrillville, Indiana. You can read the text of his speech here.

In 2012, in honor of Josey and his work, a collection of essays, “The 21st Century Black Librarian in America: Issues and Challenges,” written by and about African-American librarians and the services they provide to the African-American community was published. 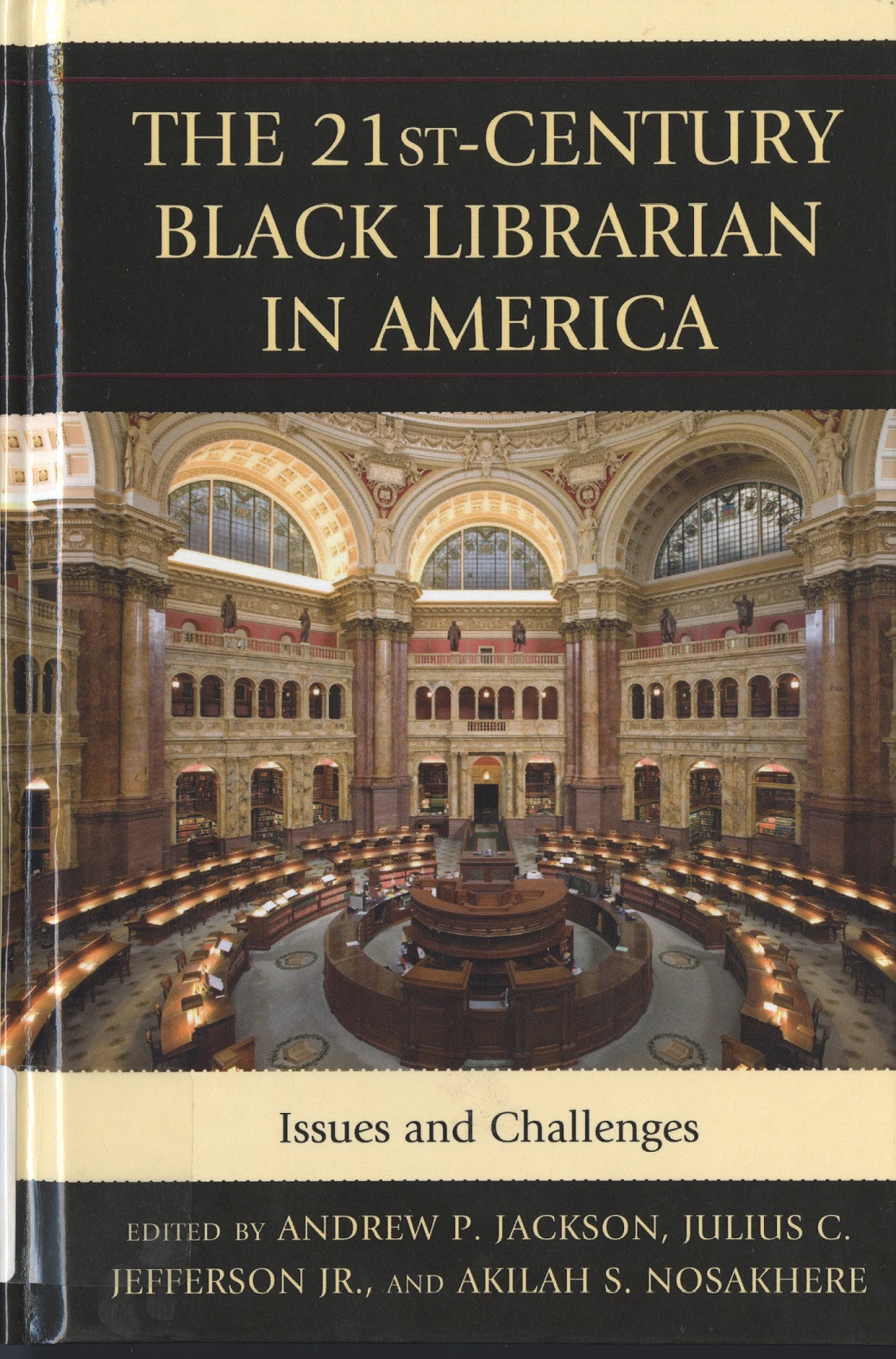 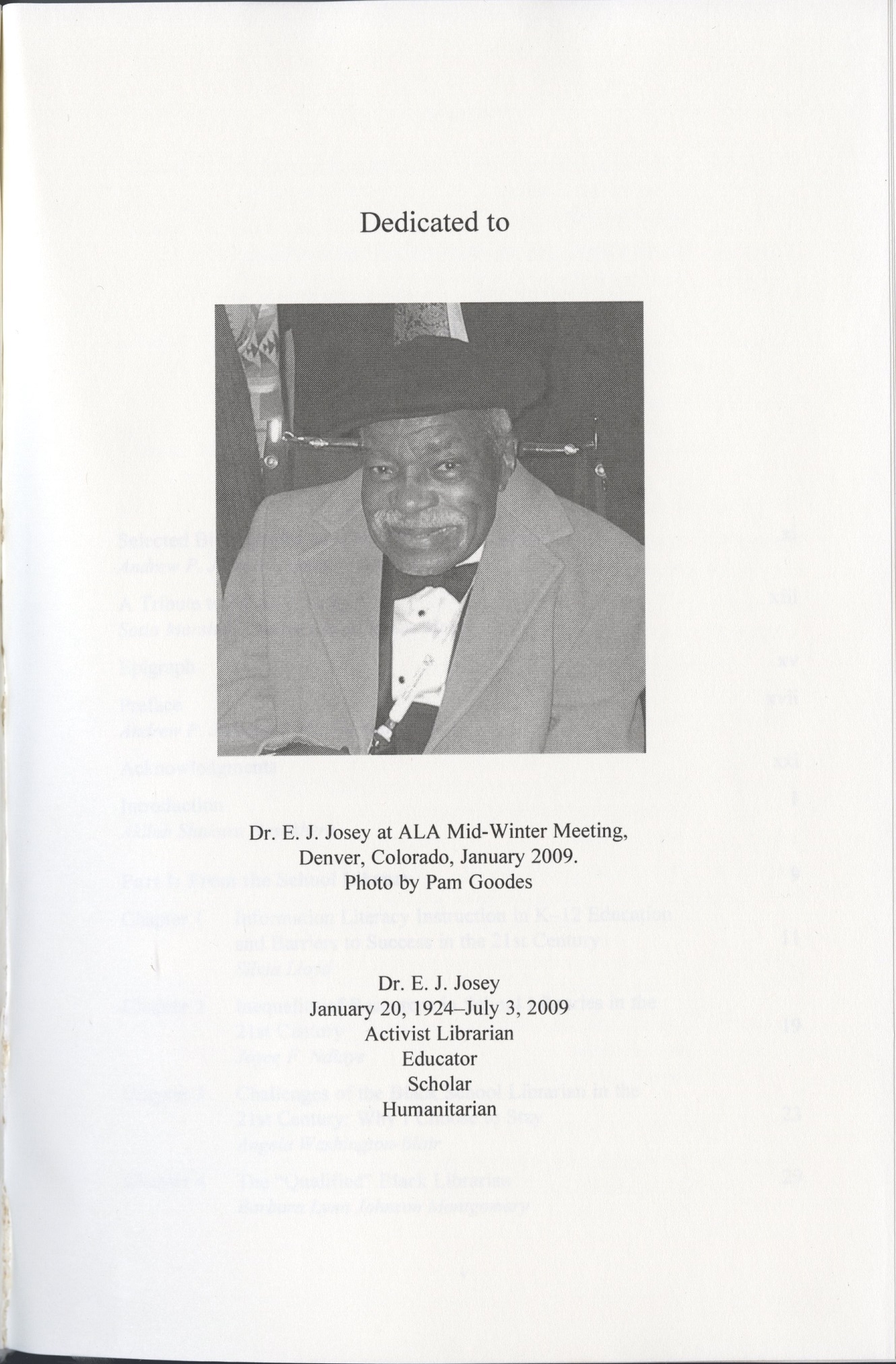 This book is also in the Indiana State Library’s collection. Members of BCALA served as editors and contributors; two of the book’s essays were authored by three Indiana librarians.

As an additional honor to Josey, BCALA offers the E.J. Josey Scholarship Award for African-American library science students. The scholarship is offered each year.

In 2020, BCALA will celebrate the 50th anniversary of its founding by Josey. It will also mark the commencement of its 11th National Conference of African-American Librarians in Tulsa, Oklahoma. To learn more about BCALA, you can visit its website.

BCALA also has affiliate chapters across the country. In Indiana, the BCALA affiliate is the Indiana Black Librarians Network. Founded in 2001, IBLN is an organization for African-American librarians and support staff to network, share ideas, work together on projects and to invest in professional development, research and scholarship to better serve the communities and organizations in which they work.

To learn more about Josey and his work, there is a video from YouTube.