Hey daddy-o, you’ve got it made in the shade! Word from the bird says something happened recently that’s the living end. If you know what happened, some might say you’re the ginchiest. If you don’t know, you are going to flip your lid when you find out. So, if you’re hanging out in your pad, you might want to hop on the internet and take a look at what all the fuss is about. On April 1, the long-awaited 1950 U.S. census was released to the public with great fanfare! It’s all copacetic now. You dig? You’re a cool cat now that you’re in the know.

Yes, you heard it right. After waiting 72 years, the 1950 U.S. census was just released to the public. Your first question might be, “Why did it take 72 years to be released?” According to The Pew Research center, the most common explanation is that 72 years was the average lifespan at the time this law was established. The U.S. Census Bureau states, “The U.S. government will not release personally identifiable information about an individual to any other individual or agency until 72 years after it was collected for the decennial census.” If you are interested in the nitty gritty of the 72-Year Rule you can visit this National Archives blog titled, “Census Records: The 72-Year Rule.” 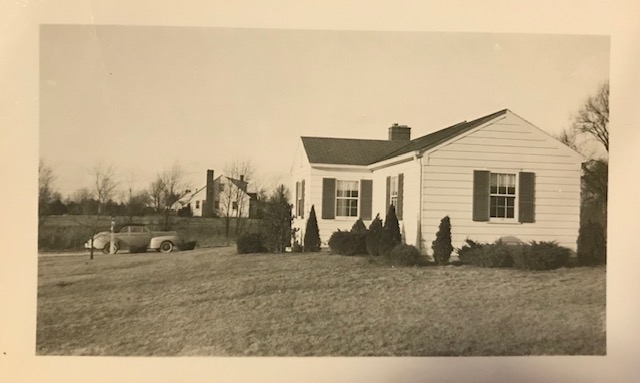 Not to dampen the excitement of searching for loved ones and ancestors in the 1950 census, but there are a few things you need to know first. If you’re used to searching the censuses previous to the 1950, you know that it’s a “fairly” easy thing to do by using Family Search, Ancestry, My Heritage, etc. because the previous censuses have all been indexed by names. Currently, this newest census will still need to be indexed to be able to search by names. The indexing is taking place as I write and some say it might be finished by the end of this month. Indexing of the 1940 census took about five months to complete when it was released in 2012.

Near the end of 2020, the National Archives and Records Administration announced they would have a dedicated website for the 1950 census that would include a “name search tool powered by artificial intelligence.” In other words, this AI is “handwriting recognition technology.” Along with searching by name, one can also filter by state, county/city, or enumeration district (ED) number. I was excited to see if I could find my parents and sister on this census. The “census gods” were with me on my very first search, which was on the National Archives site. I popped in my father’s name, city, county and state and his census page came up right away! There was just something amazing about seeing my parent’s names and my sister’s name on her very first census. Unfortunately, my luck ended there on the NARA site with searching for both sets of my grandparents by their names and living in Indianapolis at the time. I had to revert to searching by address and enumeration districts. The AI handwriting recognition technology is off to a great start, and I can imagine it will only improve greatly in the years to come. 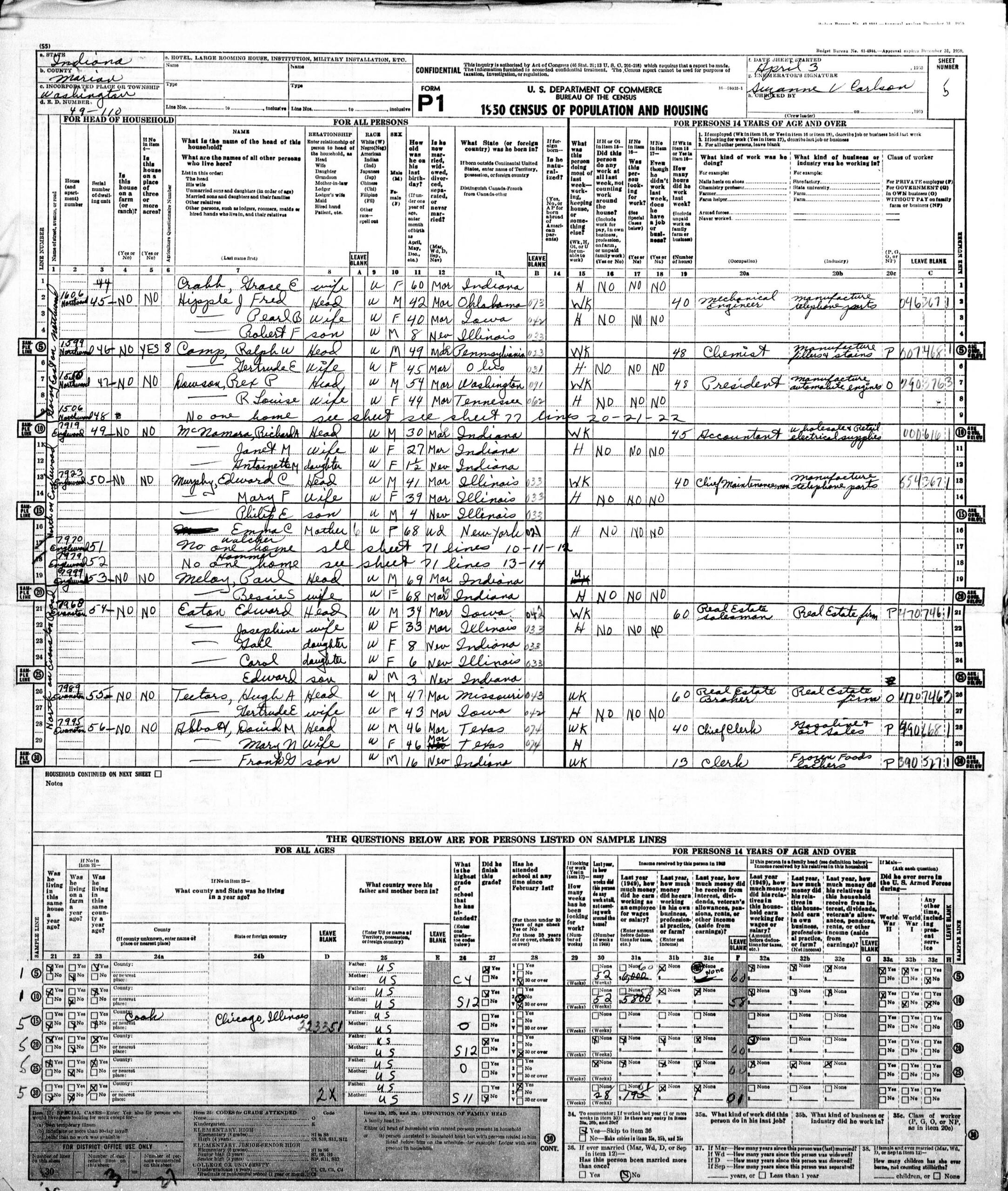 Genealogist Steve Morse has a great page to help with locating the enumeration district of your ancestor. The Unified 1950 Census ED Finder was a great help to me in finding the ED’s where my grandparents lived in 1950. Once I discovered the ED and clicked on the number, it took me to a different screen where I could select the viewer I wanted to use: NARA viewer, FamilySearch viewer or Ancestry viewer. I found the Steve Morse site the easiest to use in finding the ED and then being able to choose the viewer right from that page was a stroke of genius! I chose Ancestry and was taken to the beginning of the pages of that particular ED. Then I searched through those approximately 20 pages for the correct address to find my grandparents. One can actually search this way from the 1870 through the 1950 Census using this ED Finder. 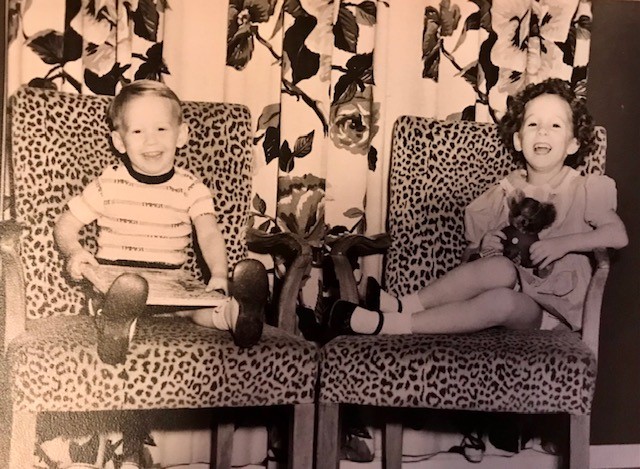 Numerous websites have sprung up to help you navigate this census. The online Family Tree Magazine has a great 1950 Census Research Guide. It includes tips on how to prepare for your research and what questions were asked on this census that include household information and employment questions. This article also includes the history and creation of the 1950 census, recording the census, tips and tricks on searching through this census and a list with links to 1950 census research resources.

If you’re so excited you’re ready to jump out of your skin, you can even sign up to volunteer to help transcribe the 1950 census! WOW, wouldn’t that be a fun thing to tell your grandchildren all about! Family Search is looking for volunteers to help with reviewing by becoming a part of The 1950 U.S. Census Community Project.

Ancestry, along with the other sites are currently indexing the census, but you can still try searching by name or you can explore maps in their 1950 census district finder to help you find your ancestors. You can visit Ancestry’s Welcome to the 1950 U.S. Census webpage for even more resources. Ancestry also released a new tool called the Census District Finder that will help in finding enumeration districts. Here is a short video by Amy Johnson Crow explaining how to use the Census District Finder on Ancestry and a link to a few more short videos about using the 1950 census.

One can also search the 1950 census for free on MyHeritage. Here is a helpful blog on My Heritage, “Jump-Start Your 1950 U.S. Census Research with the Census Helper.” You might also want to take a look at the United States Census Bureau.

In our Genealogy Division, as we’ve been searching for our ancestors, we discovered some fun comments in the “notes” section of the census pages that were written by the enumerators:

“A youngster grabbed the sheet from my lap and had torn it quite badly before it could be taken from her. The last name is spelled Buckanaber. I spelled it as it sounded to me and was incorrect.”

“I know these people. I have reported all information possible at this time as they are in Sarasota, Florida. They make the trip every winter.”

If you’re waiting with great anticipation for the release of the 1960 census, you’ll have to keep your excitement to a minimum until 2032. I’m pretty stoked about it myself because it will be the first census in which I appear. But for the time being, happy hunting in the 1950 census.