The federal E-rate program began over 20 years ago with a focus on providing low-income areas, schools, libraries and healthcare providers with telecommunications services, internet access and internal connections, including installation and maintenance at discounted rates. It is overseen by the Federal Communications Commission and administered by the Universal Service Administrative Company. Within USAC, there is a division specifically for E-rate in schools and libraries.

While the Telecommunications Act that established the E-rate program was passed in 1996, it really grew out of the Communications Act of 1934 that established the FCC and aimed to make telephone service universal, bringing it to rural communities across the nation. E-rate originally focused on both telephone and internet service, but in 2014 the E-rate modernization order was given in an attempt to close the Wi-Fi gap by providing only broadband funding. I guess they figured everyone had telephone service at this point, so yay for us!

The E-rate funding year runs from July 1 through June 30, but libraries actually start the process of applying for funds in the previous year. Right now, folks are starting to join the consortium or notifying vendors that they are seeking services for the funding year 2020, which won’t start until July 1, 2020. So, they’re always thinking at least six months ahead and usually an entire year. 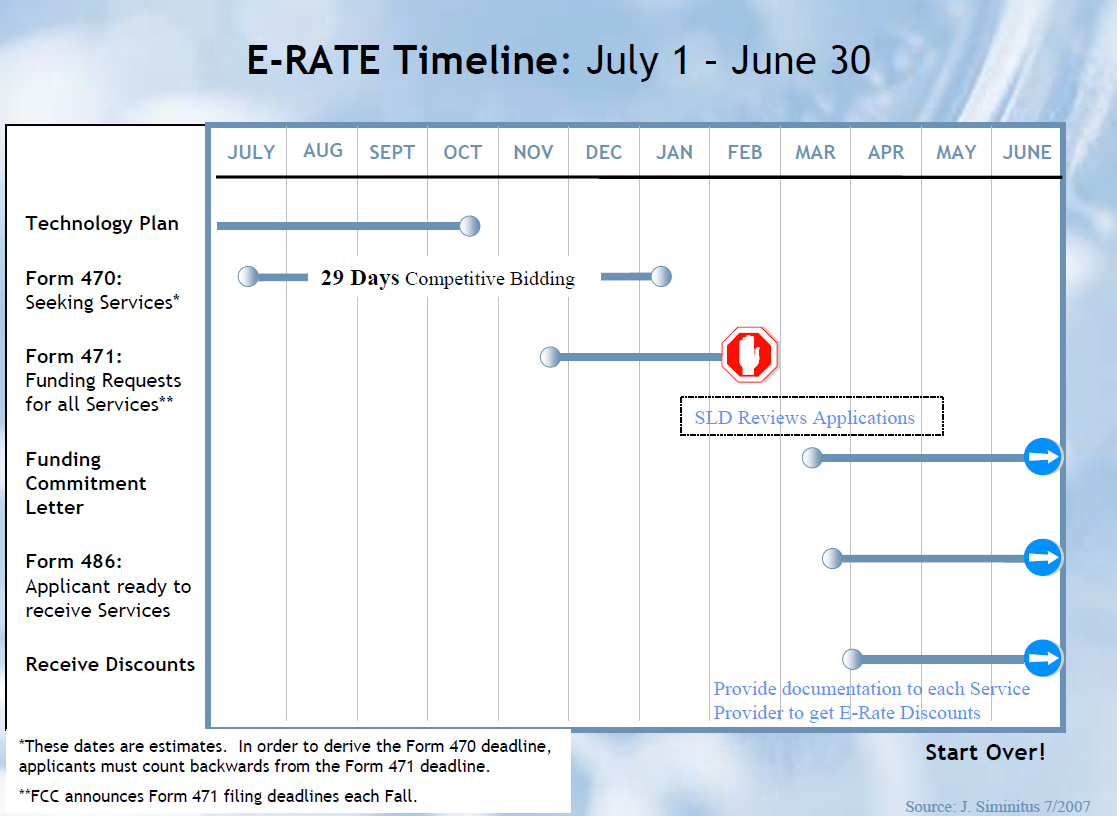 This is the general timeline of the filing windows for the various forms, but the exact dates are announced through USAC’s website.

The State has our own State Technology Grant Fund that we use to help reimburse public libraries for a portion of their internet bills. This is allocated from the Build Indiana Fund and is a completely separate program from E-rate. We do, however, take into account the amount of money a library would be reimbursed by E-rate whether or not they actually file for it. So, if a library received a 90% discount from E-rate, we would only look at that 10% left when determining how much to reimburse the library from the State Technology Grant Fund.

Something that we aren’t involved with here at the State Library, but which may be useful to residents, would be the Lifeline program, which is also administered by USAC. The Lifeline program provides discounted phone and internet rates for those whose income is 135% or less than the federal poverty guidelines, as well as those who participate in federal assistance programs like SNAP, Medicaid, SSI, Federal Public Housing Assistance, Veterans Pension and Survivors Benefit and certain Tribal programs. They may also qualify if their child or dependent participates in any of these programs.