Last November, I wrote about some of the research and activities we partake in as librarians in the Genealogy Division of the Indiana State Library. I asked the question, “Have you ever wondered what the librarians do all day and all year long?” Do you think we get bored or get tired of researching? Actually, working in the Genealogy Division is a very interesting and fun job! Let me tell you about some of the interesting research we’ve come across throughout this year. 2020 has been an interesting year, to say the least, and our patron’s queries did not disappoint.

Newspapers
Many times we try to find articles about ancestors in the different newspaper databases we have at the State Library. Hoosier State Chronicles offers free, online access to high quality digital images of Indiana’s historic newspapers. We also have other newspaper databases that are free to use within the library. Those include Newspapers.com, NewspaperArchive and the Indianapolis Star, which covers 1903 to the present. 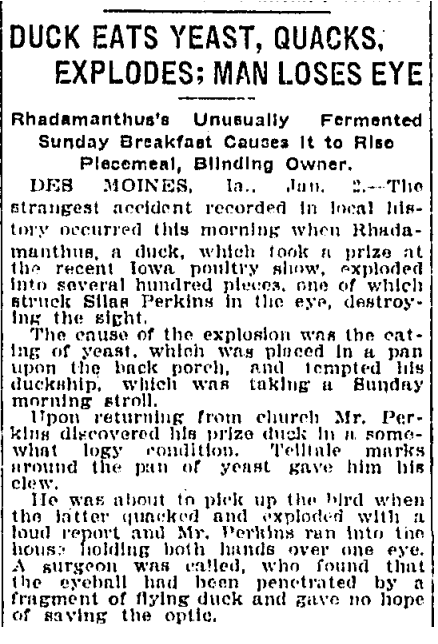 Here’s an informative article found in the Indianapolis News about a cyclone demolishing the towns of Jasper and Huntingburg, Indiana in June of 1890: 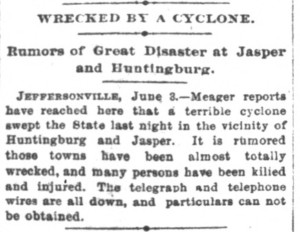 In Vincennes, The Western Sun wrote about an earthquake that hit on Dec. 16, 1816, just five days after Indiana became the 19th state of the United States. 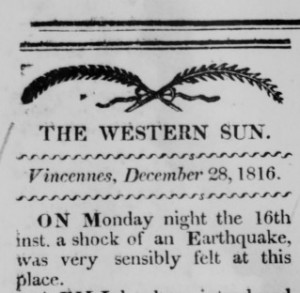 One might also learn through advertisements in the newspapers that an ancestor was the owner of a local distillery supplying corn whiskey, rye whiskey, gin, etc., for Knox and the surrounding counties in Indiana. This ad is from the Dec, 30, 1816 issue of the Western Sun: 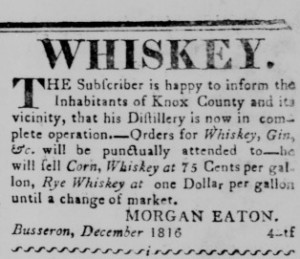 City directories
City directories are another useful tool used in locating information about ancestors. Since the federal census is conducted every ten years, that can leave a gap in knowing the location of an ancestor, especially if the ancestor lives in a different state listed on the subsequent census. A city directory usually includes an individual’s address, their occupation, spouse’s name and other helpful information. Be sure to take a look at the Table of Contents of a city directory. There is a wealth of information contained within the first 100 pages before the name and address listings. Many of these sections contain names of people. For instance, the fire department section names the captain of each fire station. The police department section names all of the current policemen that year and their specific job assignments. Looking through these first sections can also give you a flavor of the time period in which your ancestors were living. Here are examples from the 1890 Indianapolis Polk City Directory: 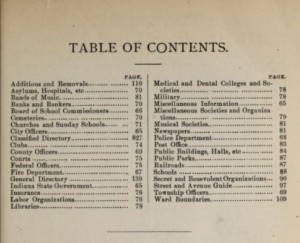 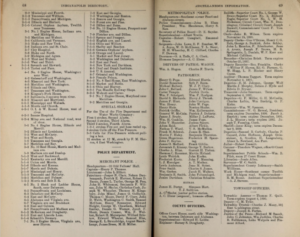 The advertisements within the city directories are also helpful in giving the flavor of the period. Sometimes you might just find an advertisement for a business that your ancestor owned or was working as an employee. We found advertisements of M.H. Farrell Monuments and Statuaries and McNamara, Koster & Co. in several Indianapolis City Directories. These were companies owned by ancestors of one of our patrons. Imagine their delight in seeing these from 1894, 1895 and 1897 Indianapolis Polk City Directories: 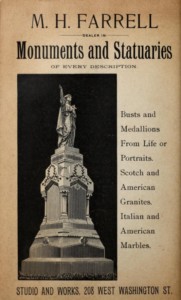 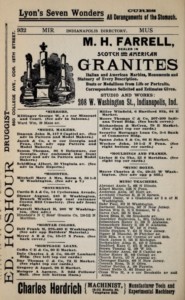 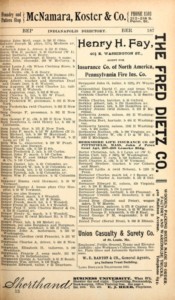 Very basic patron question opens up a can of worms
One of our genealogy librarians was assigned a basic question, which was to find the parent names of a man born in Indianapolis in 1883. The patron had a small bit of pertinent information that was helpful. This basic question ended up uncovering a wealth of information about his ancestor the patron had no idea about. Through the database Fold 3, our librarian found internal letters between FBI agents pointing to FBI files on this ancestor. The files related to the time the ancestor was a yeoman in the U.S. Navy during World War I and were also related to his involvement being a very strong and vocal advocate for an Irish Republic. The Irish Republic came into being in 1916. It then became the Irish Free State in 1922. The ancestor also believed in and marched with the Suffragettes.

The ancestor died in 1925 at the early age of 42. An obituary stated: “Episcopal divinity student; ordained Episcopal clergyman; yeoman in the United States Navy during the war; ardent advocate for an Irish Republic when moral and physical courage were the essentials; National Counsellor and co-organizer of the Friends of Irish Freedom in the United States; Archimandrite of the Greek Orthodox Church in North America; Graymoor Friar and student for the Catholic Priesthood: death.”1 Despite the pleasantries of this 1925 obituary, the ancestor had a brutal and tragic end to his life under mysterious circumstances.

Frankford Yellow Jackets football team
This year, we received an emailed photo of a 1927 Yellow Jackets team. The patron was pretty sure the team was from Indianapolis and was asking for help with identifying the building behind the steps where the team posed for the photo. One of the pictured players was an adopted ancestor of his wife. After discussion about the photo and not coming to any conclusion, we referred the photo to the librarians in our Manuscripts and Rare Books Division. Unfortunately, they were not able to identify the building either. As hard as we try, sometimes we are not able to find the answer to every question we are asked. 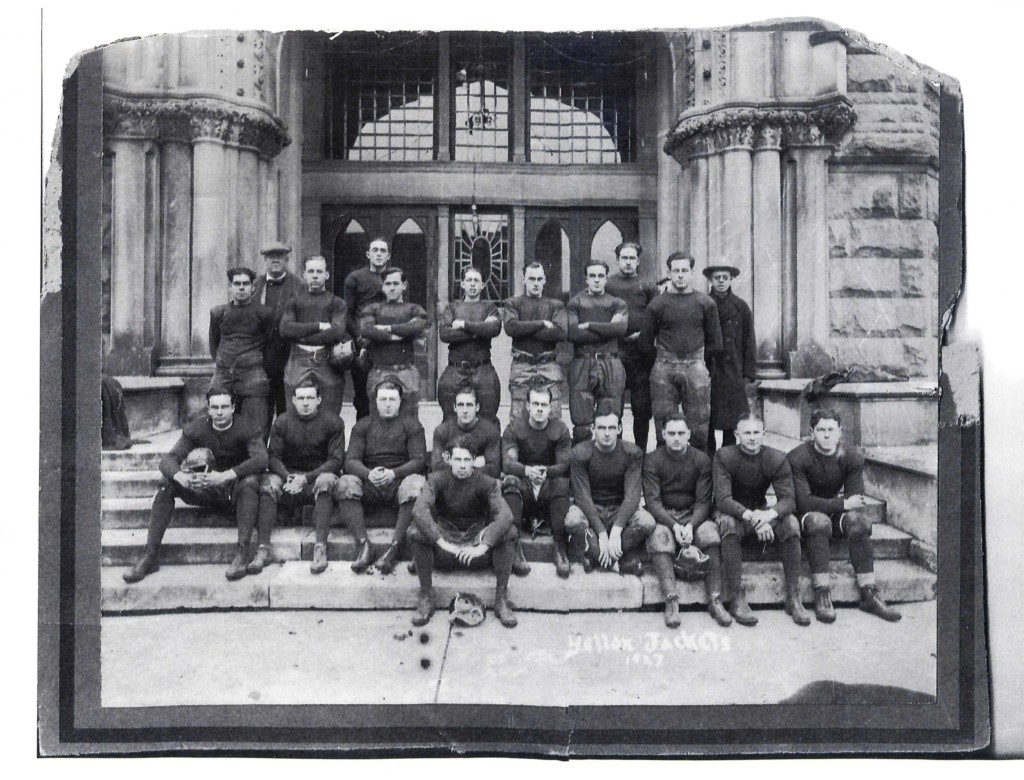 Through our research though, we found that this team was actually the Frankford Yellow Jackets, an NFL team from Philadelphia during the years of 1924-31. Frankford is a neighborhood in the Northeast section of Philadelphia. The Frankford Yellow Jackets won the NFL Title in 1926. Unfortunately, the team began to decline mainly due to financial hardships brought on by the Great Depression of 1930. Another reason for their decline was due to a 1931 catastrophic fire that damaged the Frankford Stadium. The team then had to find a different location to play their home games.

The 1931 season, which would be their last, ended on a good note, though. The Yellow Jackets defeated the Chicago Bears 13-12 at Wrigley Field on Oct. 26, 1931. As an added tidbit, this apparently marked the last time a Philadelphia-based NFL team would win an away game over the Bears until the Eagles beat them in 1999. The Yellow Jackets were involved in another piece of history in that during their short time in the NFL, their player, Ignacio Molinet, became the NFL’s first Latino player. In 1931, the Frankford Athletic Association was unable to find a buyer for their team; thus, they returned the franchise to the league. In 1933, the NFL granted an expansion franchise and the new owners named the team the Philadelphia Eagles, and as they say, the rest is history.

Marriage records
The past few years, and especially this year, we have received hundreds of phone calls and emails from patrons and county clerk offices requesting information about marriage records. This is due to the Federal Real ID Act that was passed in Congress in 2005. “Beginning Oct. 1, 2021, a Real ID-compliant driver’s license, permit or identification card will be required to board commercial airplanes or enter certain federal facilities. A Real ID is indicated by the star in the upper right-hand corner of your driver’s license, permit or state identification card.” The Real ID documentation checklist can be accessed here.

If your current name does not match the name on your identity document (e.g., birth certificate) additional government-issued documentation will be required. This is where marriage records come into play. Any person who has been married and changed their name will have to acquire a certified copy of their marriage record(s) as part of the documentation needed to obtain a BMV Real ID. All original marriage records are kept within the county where the couple applied for their marriage license. The County Clerk Offices are the only place you can obtain a certified copy of your marriage record. We do not have any original marriage records at the Indiana State Library, nor can we certify a marriage record. What we can do is look up the couples names and year of marriage, usually on Ancestry’s Indiana Marriage Certificate Collection, and view a digitized copy of the marriage record. By viewing this copy we can help patrons and county clerk offices verify in which county the original record should be, along with verifying the exact date of marriage. Again, the marriage record is kept in the county clerk’s office where the couple applied for the marriage license. If the couple were married in a different county, the record goes back to the county where they applied and is filed there. For a complete county listing with contact information access the Directory of Courts & Clerks in Indiana.

COVID-19 quarantine time
During the COVID-19 quarantine time, we worked remotely at home five days a week. In addition to answering patron questions over the telephone and through our online Ask-A-Librarian service, we worked on some of our yearly projects. One of my projects is to find free online books that match the books in our Genealogy Collection. When I find an exact match in an online copy of one of our books, I send the link to our Cataloging Division and they add the link to the catalog record of that book. As you can imagine, it is a slow-going process, but well worth making books more easily accessible for our patrons.

Another project that a few of us in the Genealogy Division are working on is editing some of the records in the Indiana Marriages Index through 1850. There are 4,000-plus records in this index where the actual marriage date is unknown. Through research and a bit of sleuthing, we can usually locate the exact date of marriage and edit the record in the database so it is correct and will help our patrons.

One activity that all of us in genealogy took part in during the quarantine was watching pertinent genealogy webinars to learn as much as we can about different genealogy-related topics. One of the areas of interest that I felt I needed to know more about was World War I. Through The United States World War One Centennial Commission and The Doughboy Foundation, I was able to view several free and very informative webinars. The webinar “The Hello Girls: America’s First Women Soldiers” was excellent! This was the first time I had heard of these brave women. There is also a book by the same title authored by Elizabeth Cobbs. I highly recommend viewing any of these free webinars if you have an interest in World War I.

We never know what kinds of interesting topics we’ll receive from patrons who need our research help. We get a very wide variety of questions. This certainly keeps us on our toes and gives us lots of research adventures!

1 thought on “A year in the life of a librarian in the Genealogy Division of the Indiana State Library, part deux”