Have you ever wondered what the librarians in the Genealogy Division at the Indiana State Library do all day and all year long? I sometimes get a glazed over response from people when I tell them what I do for a living. Most times, though, people react with great interest and they have many questions. I feel like I could talk about genealogy and what I do for hours! There are always new and interesting questions we receive from patrons who are inquiring about one or more of their ancestors.

We recently researched individuals who were performers in the travelling circuses and vaudeville acts of the late 1800s. Talk about a challenge in trying to research people who were constantly on the move and went by several different stage names! We are definitely always up for a challenge and happy to guide and help any patron with their research. Due to time constraints, we are sometimes unable to conduct in-depth research, but we are most definitely available and happy to help with less comprehensive research on ancestors.

In this case, we were able to find information about a particular travelling circus they were performing in throughout the states of Indiana, Illinois and Ohio around the year 1900. With the ancestors using stage names sometimes as their real names, it has been difficult trying to track down their places of death and burial.

Sometimes we uncover unfortunate incidents, like when we learned of the demise of two-thirds of a 12-generation family tree chart that included an ancestor who arrived in America on the Mayflower in 1620. A rodent that may or may not have been the family pet escaped his caged home and was thought to have gone on to rodent heaven. However, several weeks later said rodent was found living the life in a cozy little nest of shredded family tree material! He was most assuredly on a mission to erase 12 generations of a family tree. Thankfully, though, those brave people aboard the Mayflower have been well documented along with five to six generations that followed after them. Piecing together the names on the one-third of the salvaged family tree chart and researching in our numerous books about the people on the Mayflower has made this research not as daunting as one might think. 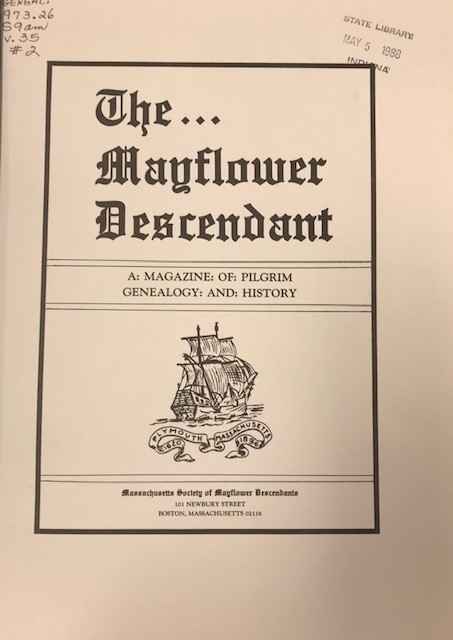 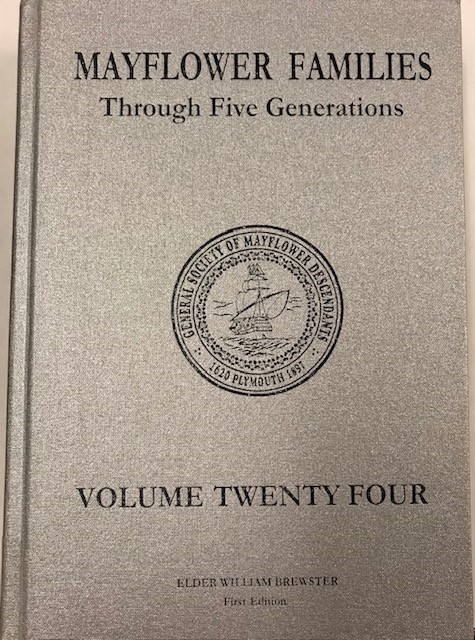 Speaking of books in our Genealogy Collection, we have some very intriguing books to complement our death record index books. Several of the Indiana counties have published coroner record books. Most of the entries I’ve read in the coroner’s reports are descriptive and they don’t mince words. For example, one ancestor I researched this year has an entry in the Decatur County Indiana Coroner’s Inquest Record Book 1, 1873-1900. Herman Demer, born June 9, 1852 in Germany, came to America and made his way to Indiana where he married and eventually became the father of six children. He died on April 1, 1896 in Greensburg in Decatur County, Indiana. The coroner’s entry reads:

“Report and verdict of the Coroner of Decatur County as to the cause of the death of Herman Demer at crossing of Vine Street and the track of CCC & S & L Railroad in the city of Greensburg, Indiana on May the 1st 1896 after hearing the evidence of 10 witnesses in this case…

“I do find that as the mail train No 11 from Cincinnati came into this city on said date running at the rate of 20-25 miles an hour and at the crossing above named the engine of said train struck the deceased Herman Demer together with his horse and wagon, killed the horse instantly and demolished the wagon, and so injured and mangled the deceased Herman Demer that he died in a few minutes after being hurt and I do find that the accident was due to the fast rate the train was being run by engineer William Nagle at the time of the accident.

Would call the attention of the authorities to the fact that all trains are being run at to great speed through this corporation. May 7, 1896. Signed, George W. Randall, Coroner Decatur County Indiana.” 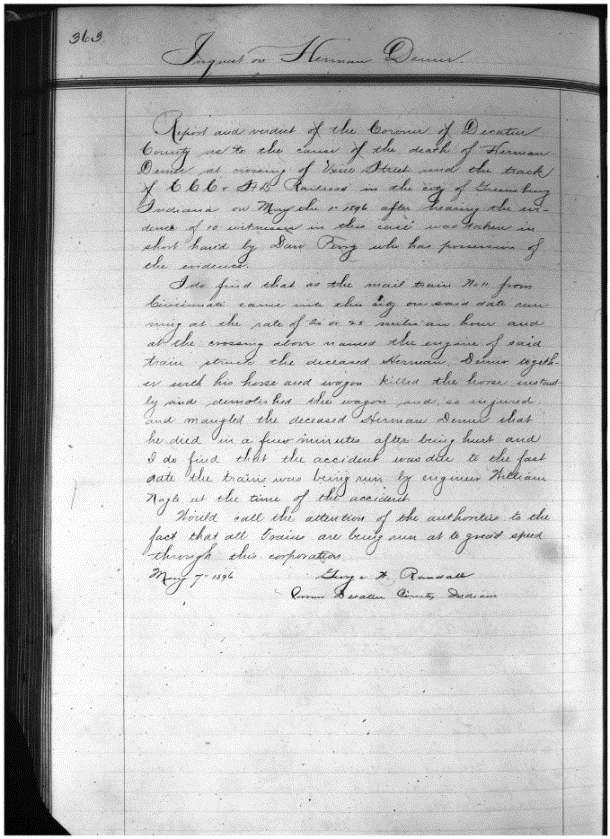 Old newspaper articles also could be very blunt in their accounts of events. There was another ancestor research I helped with that became quite a gripping tale as I searched in our online newspaper databases. The female ancestor had been a well-beloved fixture in the community for years. One morning on the farm, sometime in the 1880’s, she went out to feed the pigs and had her apron pockets full of pig feed. The newspaper article stated they believed she suddenly had a heart attack and collapsed in the pig pen. In the process of collapsing, the feed was scattered all over her upper torso and hands. I’ll leave it at that and let you figure out the rest. The newspaper article went into very gruesome detail, as was the custom of the times.

Another book we have with an entirely fascinating title is “The Georgia Black Book: Morbid, Macabre & Sometimes Disgusting Records of Genealogical Value” by Robert Scott Davis. The title either grabs your senses and pulls you in or it repulses you as you firmly say, “No thank you!” The contents include names of horse thieves, liars, convicts, murderers, murder victims, insane asylum inmates and more. It covers the period of 1754 through 1900 mostly. A few chapters on murders cover the 1823-1969 time frame. It contains the names of over 13,500 people. I haven’t actually researched inside this book for any patrons, but earlier in the year I got pulled in by the title alone. This is just one of many intriguing books we have of genealogical value.

I think it’s safe to say that librarians who work with genealogy love history. Having the opportunity to research during different time periods of our country’s history and also learn about the history of countries where people emigrated from makes history come alive. Learning about history from our school books is one thing but then delving into the lives of real people that lived through particular times, makes history more authentic and palpable. For instance, in researching an American Civil War Soldier from Putnam County, Indiana who died of dysentery in a makeshift hospital far from home, brought a human realness to history for me. In this research I also learned that during the American Civil War, 95,000 soldiers died from dysentery.

We all learned long ago in school that the pilgrims came to America in search of a place to live peacefully without religious, and other forms, of persecution. Later, people came to America fleeing cultural persecution, political upheaval, land and job shortages, famines and continued religious persecution. When I research actual people that left their families and homes in the only country they probably ever knew, it most definitely makes history come alive. It has brought a new sense of awe and utmost respect to all of the immigrants that came here in search of a better life. I can’t even begin to imagine the bravery it must have taken to leave everything they ever knew for the dream of a better life.

We have the following book, and many more like it, that are great history and genealogy resources: “History for Genealogists: Using Chronological Time-Lines to Find and Understand Your Ancestors” by Judy Jacobson. 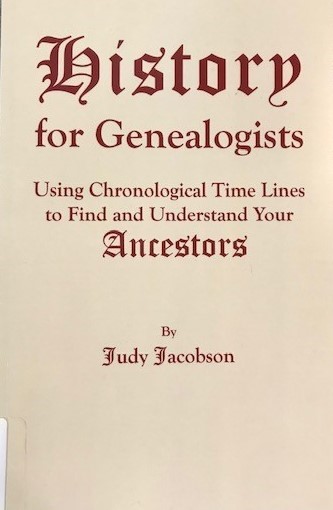 In the preface of this book, I fully agree with what the author states about the importance of seeing ancestors in the historical context in which they lived:

“…In my research I try to understand why people made the choices they made, what type of people they were, and how they came to be that was. I like to see their world through the eyes of those ancestors. … This book is designed as a handy reference to provide researchers with what I consider to be a critical but often overlooked dimension to their genealogical research: an historical context.”

For example, hundreds of years ago, and even more recently, there were many occupations that no longer exist today. If you would like to read through an entertaining list of occupations from yesteryear, you can access that link here. I am including a small list of some of the more curious names of occupations below. 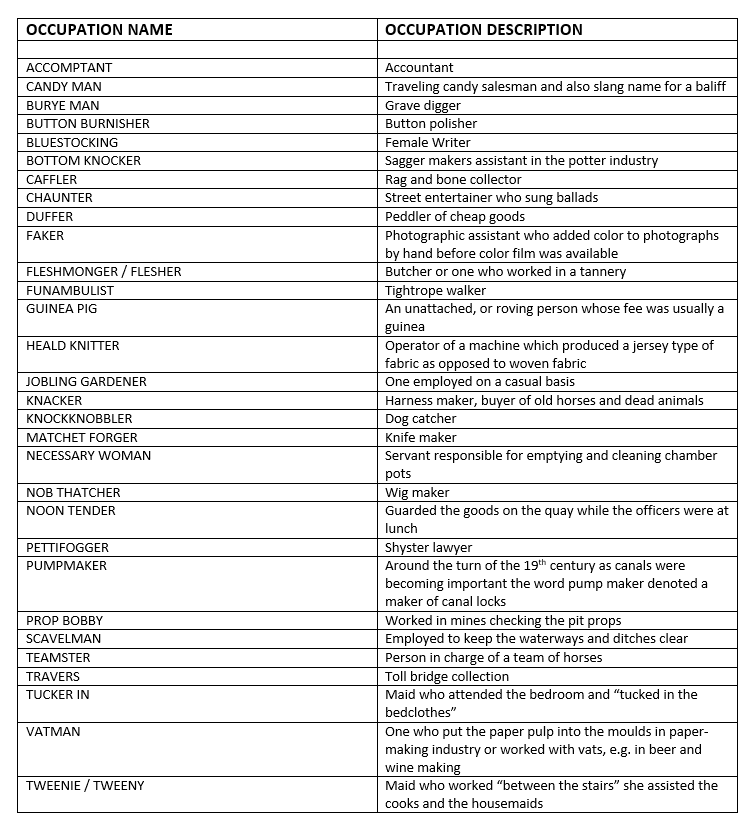 I hope you have enjoyed reading about a few of the interesting research topics and related items that we conduct year round in the Genealogy Division of the Indiana State Library. There’s always some new topic or ancestor that is fascinating and intriguing.  Come in and visit us sometime or send us a question through the Ask-A-Librarian interface on our library website. We are happy to help.